Edward Stanford (1827-1904) was a prominent British mapmaker and publisher. A native of Holborn in the heart of London, Edward was apprenticed to a printer and stationer at the age of 14. After his first master died, he worked with several others, including Trelawny W. Saunders of Charing Cross. Saunders oversaw young Edward’s early career, ensuring that he became a Fellow of the Royal Geographical Society. Associations with the Society eventually brought Sanders much business and gave him a reputation as a publisher of explorers. As testament to this reputation, the Stanford Range in British Columbia was named for him by John Palliser.

Stanford briefly partnered with Saunders in 1852 before striking out on his own in 1853. He was an agent for the Ordnance Survey, the Admiralty, the Geological Survey, the Trigonometrical Survey of India, and the India Office. He also controlled the maps of the Society for the Diffusion of Useful Knowledge, another lucrative source of income. In 1857, Stanford founded his namesake Geographical Establishment, with Saunders and A. K. Johnston as engravers. Thereafter, Stanford was known for his “library maps”, particularly those of Africa and Asia.

Although he had authored many maps, the Harrow Atlas of Modern Geography and a similar volume on classical geography, Stanford is better remembered today as the leader of a successful map business. Ever in search of more inventory, he acquired the plates and stock of John Arrowsmith, heir of the Arrowmsith family firm, in 1874. By 1881 he employed 87 people at his premises at 6 Charing Cross Road, Saunders’ old address. As he aged, he phased in his son Edward Jr. to run the business. He died in 1904. The business survived him, and the Stanford’s shop is still a prominent London landmark today. 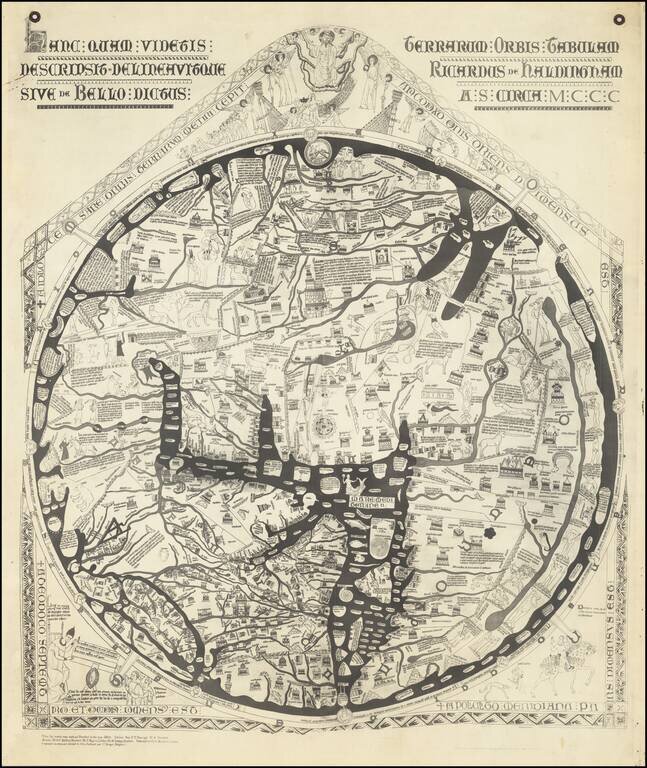 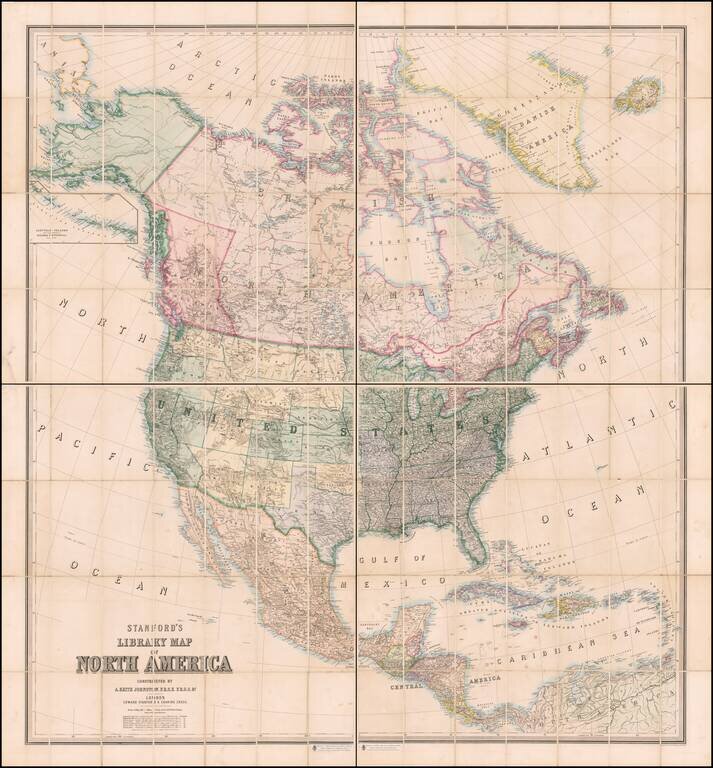 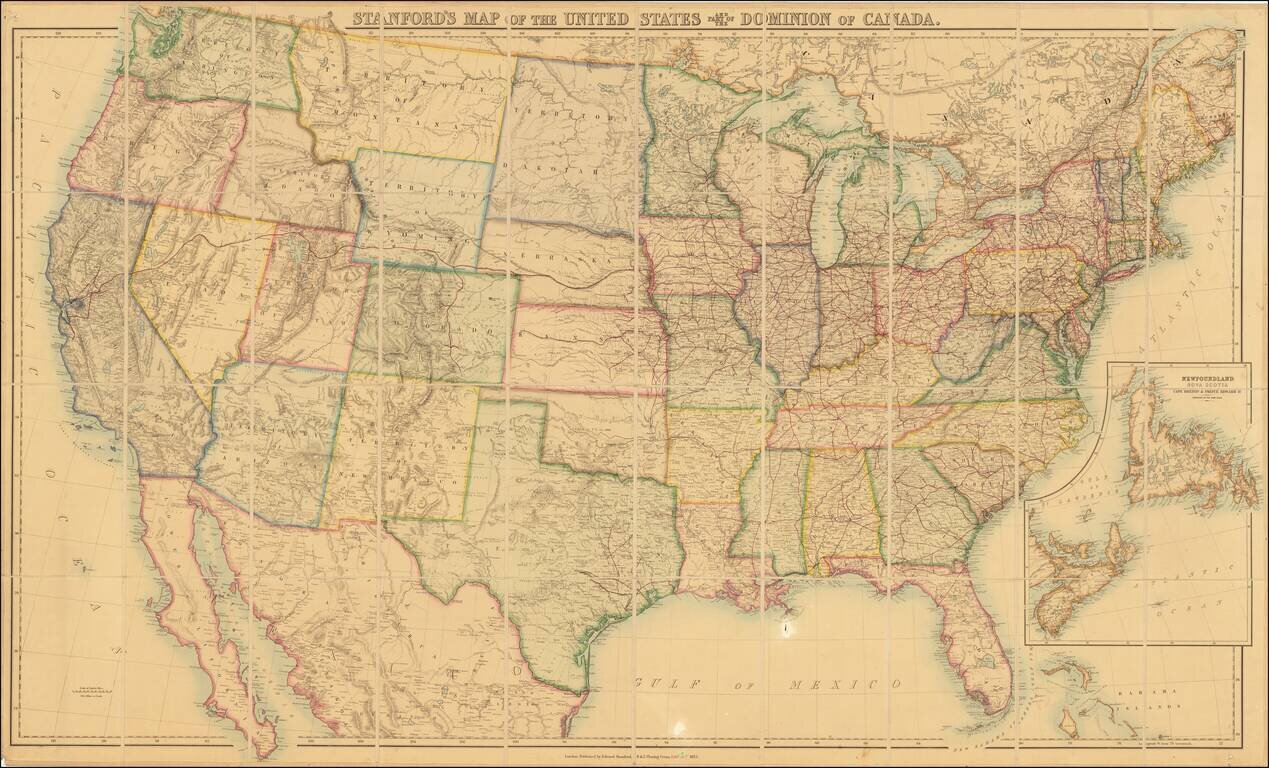 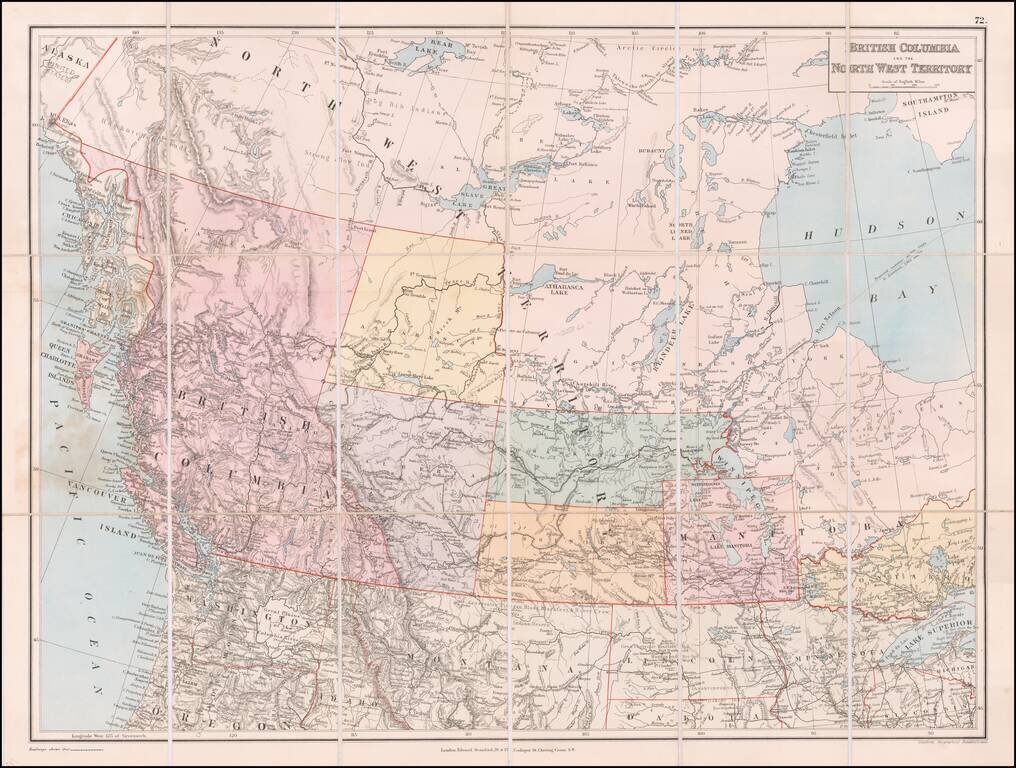 1888 - [State of Lincoln!] British Columbia and the North West Territory

Rare separately published map of Western Canada and part of the Northern United States, including the proposed State of Lincoln. The map provides a detailed treatment of the Western part of Canada, along with a very rare appearance of the proposed... 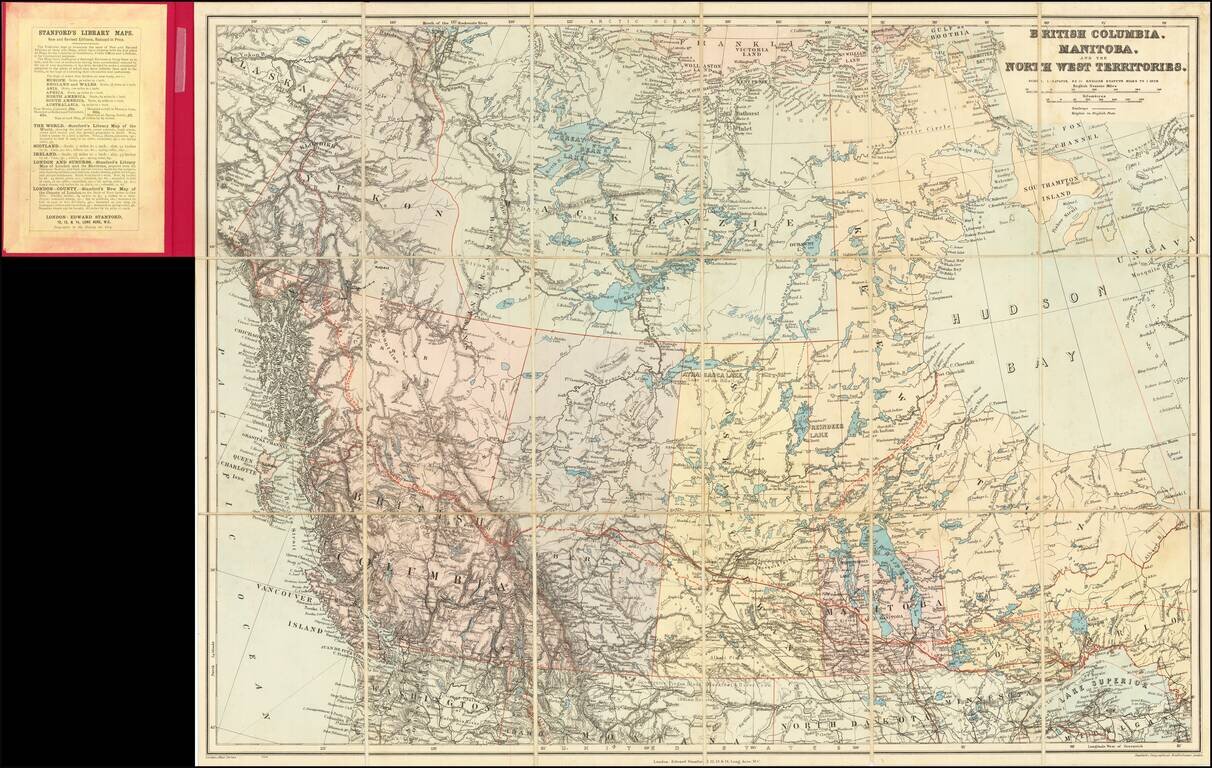 Includes Early Annotations Detailed map of Canada, illustrating the route of the Grand Trunk Railway and Projected lines. The map illustrates the lines of the railway in red and the projected lines in a broken red line, extending to the Vancouver... 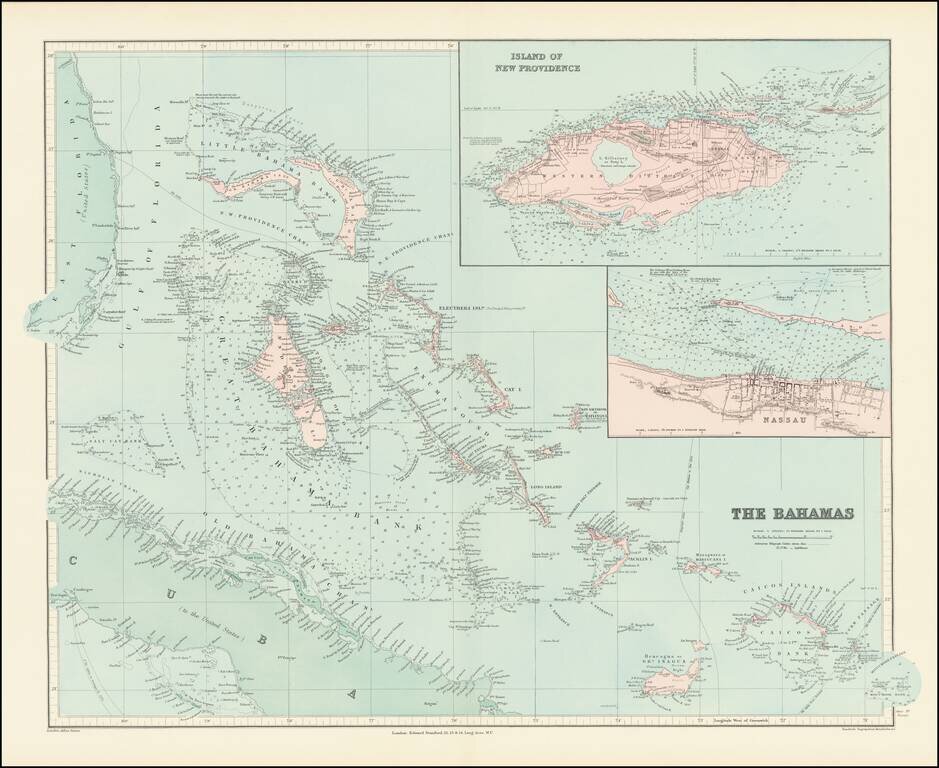 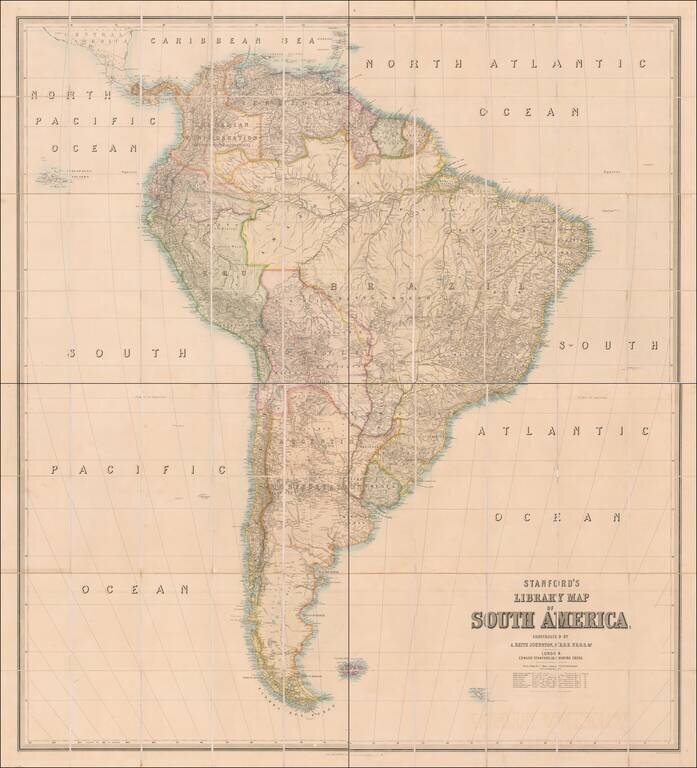 Bogota as the Prime Meridian! Rare large format map of most of Colombia (omitting a small portion of the west coast, to the west of the Rio Quito, bearing the signature of William Lidstone, C.E. The map contains political division with added color,... 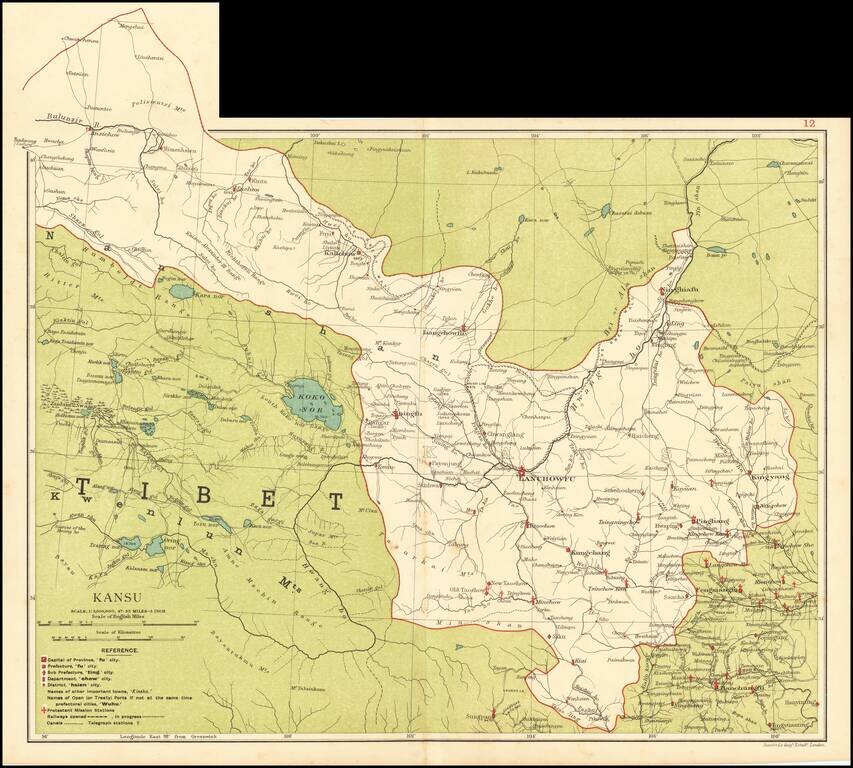 Fine regional map of Gansu & Ningxia, from the Atlas of the Chinese Empire; Prepared by Mr. Edward Stanford for the China Inland Mission. The work was published by Morgan & Scott, Ltd., London. Lanchowfu (Lanzhou), the Great Wall of China,... 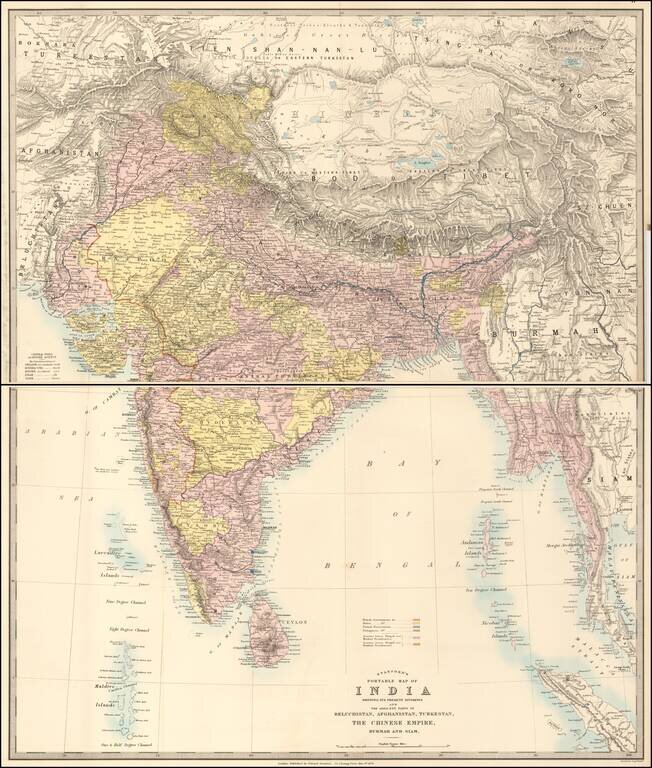 1874 - Stanford's Portable Map of India Shewing its Present Divisions and The Adjacent Parts of Beluchistan, Afghanistan, Turkestan, The Chinese Empire, Burmah and Siam.

Showing political and administrative divisions, cities, towns, roads, railroads, mountains and rivers. Relief shown by hachures. Prime meridian is Greenwich. A fine detailed map of India and the Burmese coast. The map extends from Turkestan and... 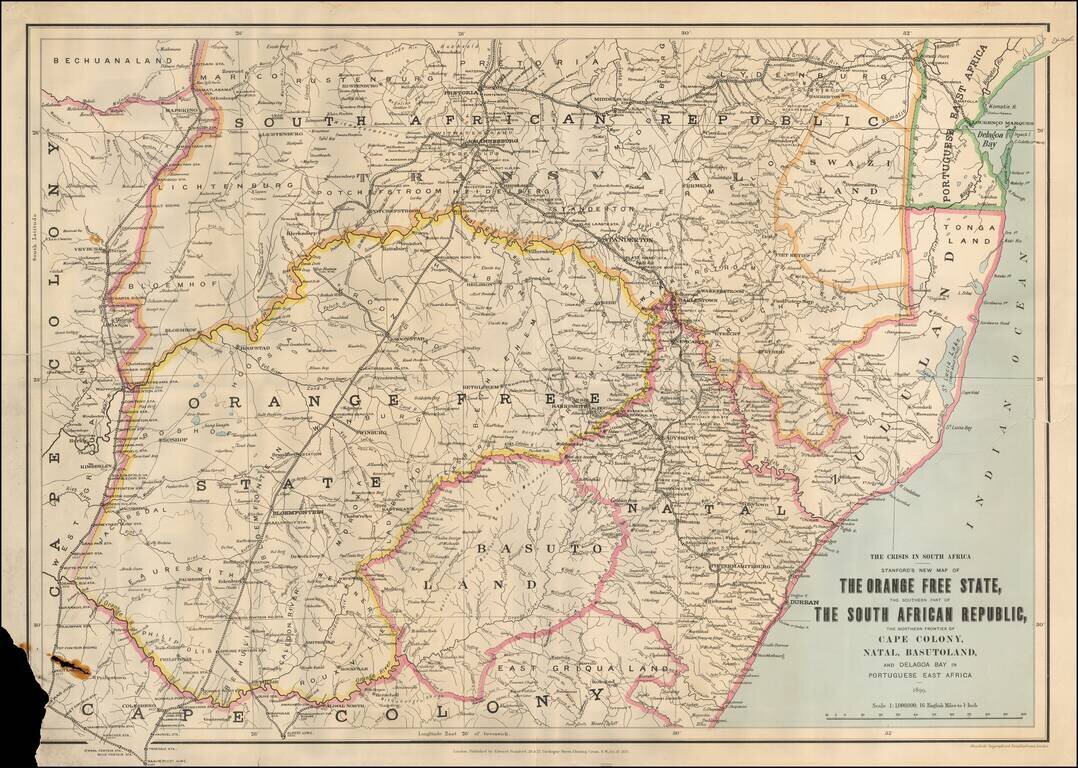 1899 - The Crisis in South Africa -- Stanford's New Map of The Orange Free State, The Southern Part of The South African Republic, The Northern Frontier of Cape Colony, Natal, Basutoland, and Delagoa Bay in Portuguese East Africa 1899

First edition of this scarce regional map of South Africa and neighboring regions, published during the "Crisis in South Africa." On December 30, 1880, a Boer republic was proclaimed and fighting broke out until the treaty of Pretoria (April 5, 1881)... 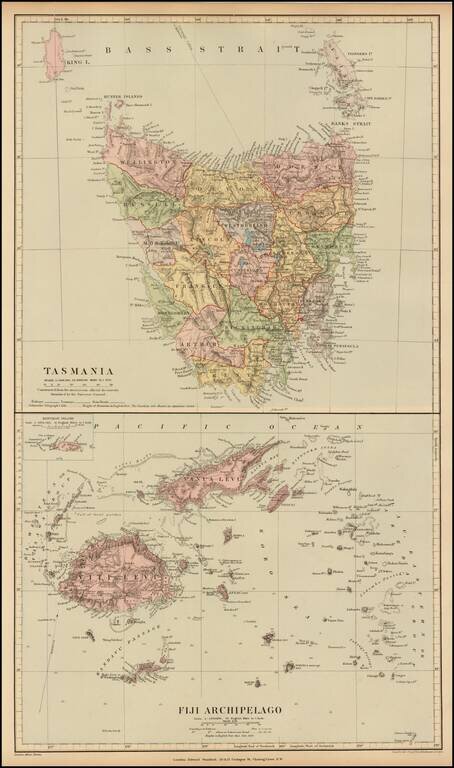 Fine and highly detailed map of Fiji and Tasmania, from Stanford's London Atlas. The map is meticulously colored by counties and shows fine detail throughout. 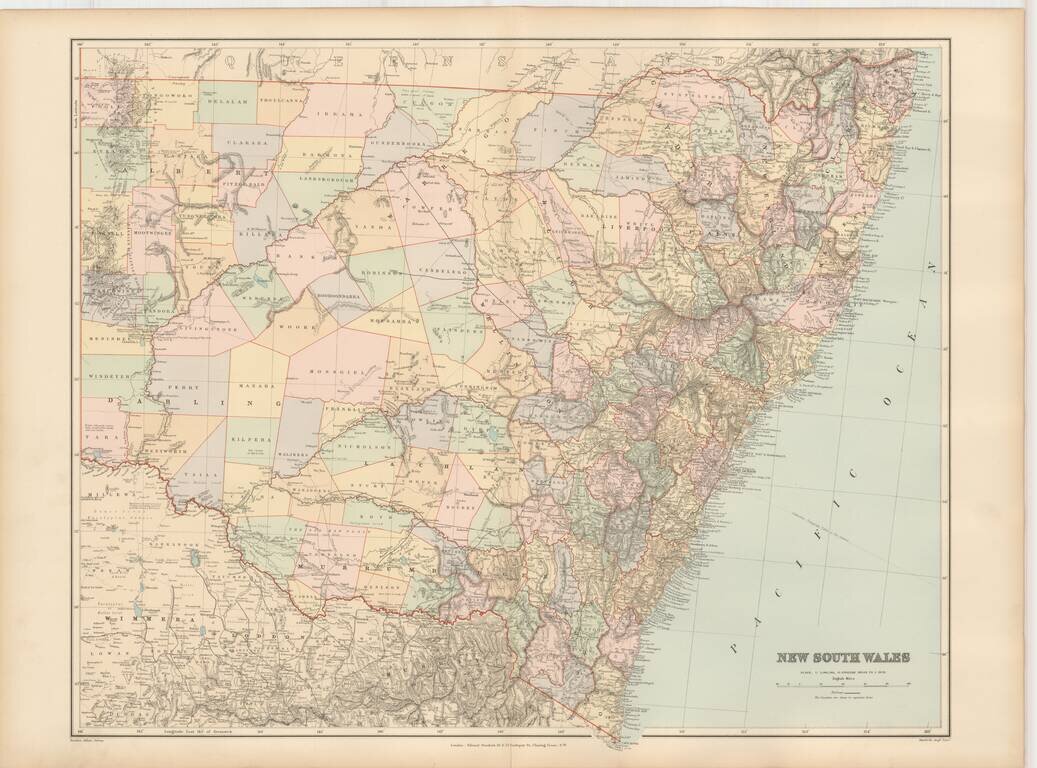 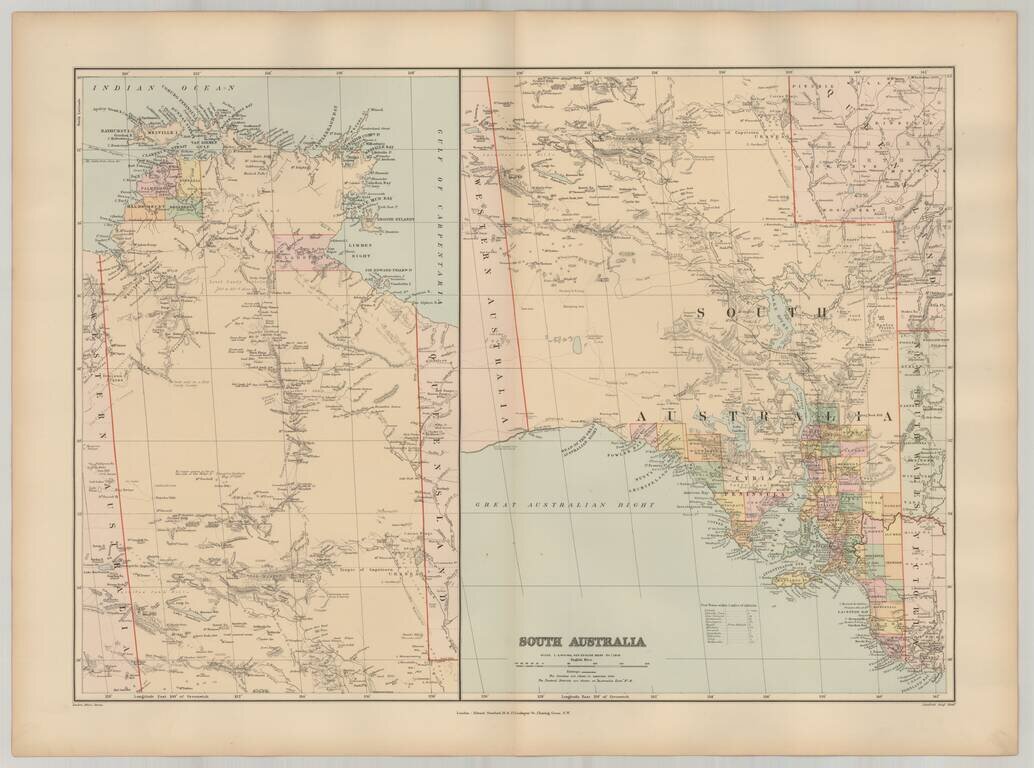 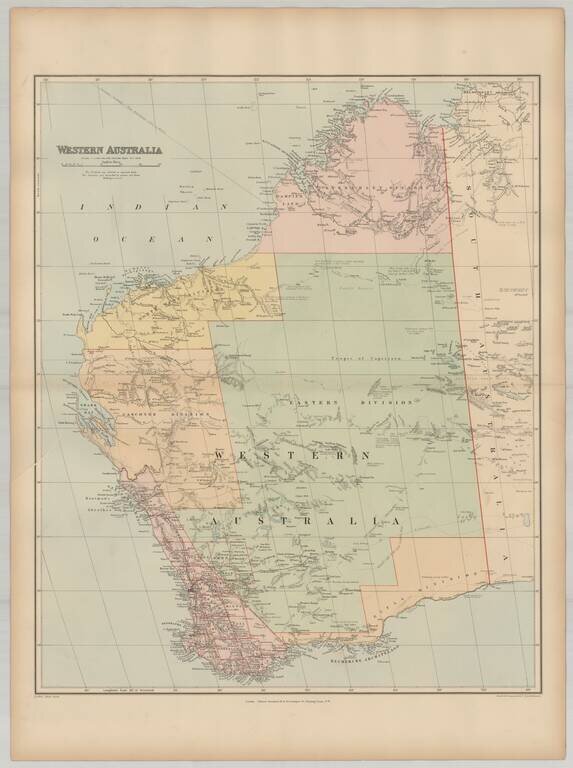 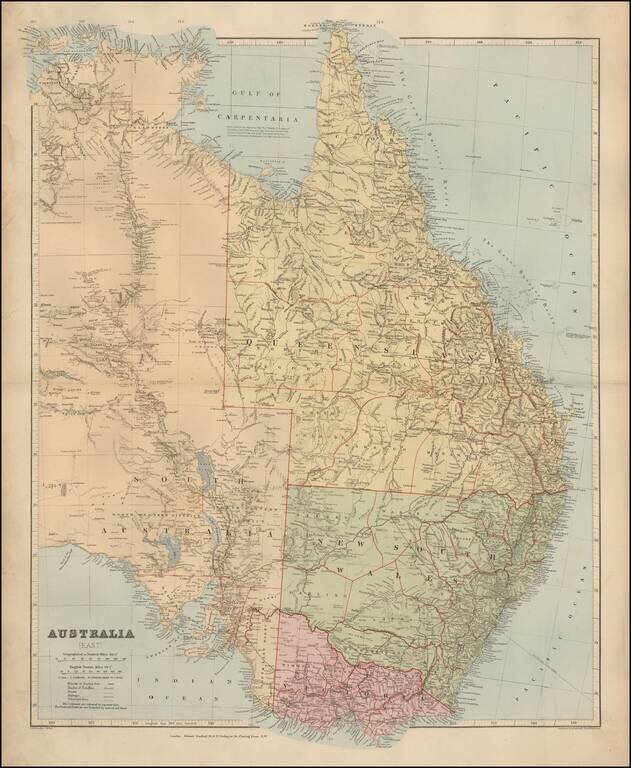