Henricus Hondius (1597-1651) was a Dutch engraver and mapmaker, a member of a prominent cartographic family. His father, Jodocus Hondius, was also an engraver and geographer. While working with his father, Henricus was instrumental in the expansion and republishing of Mercator’s atlas, first published in 1595 and republished by Hondius in 1606.

Upon his father’s death in 1612, Henricus and his brother, Jodocus the Younger, took over the business. He set up his own shop in 1621, where he continued to release new editions of the Mercator atlas. Later, he partnered with his brother-in-law, Jan Janssonius, in continuing to expand and publish Mercator’s atlas, which would become known as the Mercator-Hondius-Janssonius atlas. Born and based in Amsterdam, he died there in 1651. 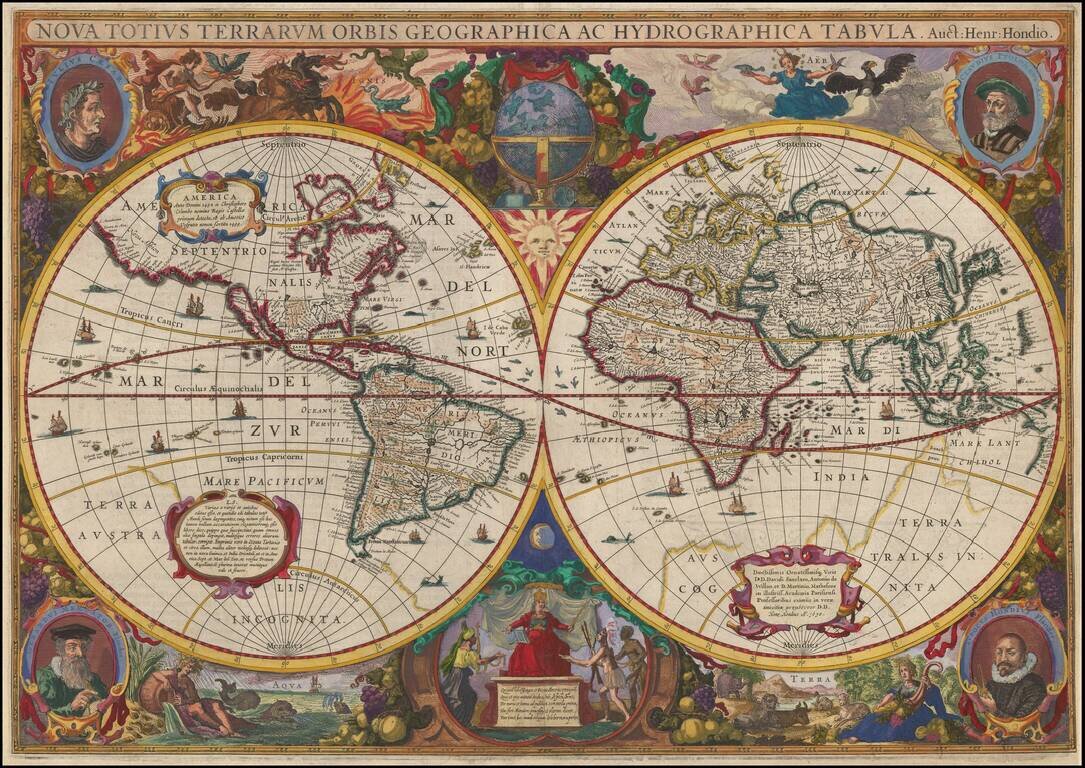 One of the Most Famous and Ornately Detailed World Maps of the Seventeenth Century Excellent example of the first state of Henricus Hondius' decorative world map, first issued in the 1630 edition of the Mercator-Hondius Atlas. It includes unique... 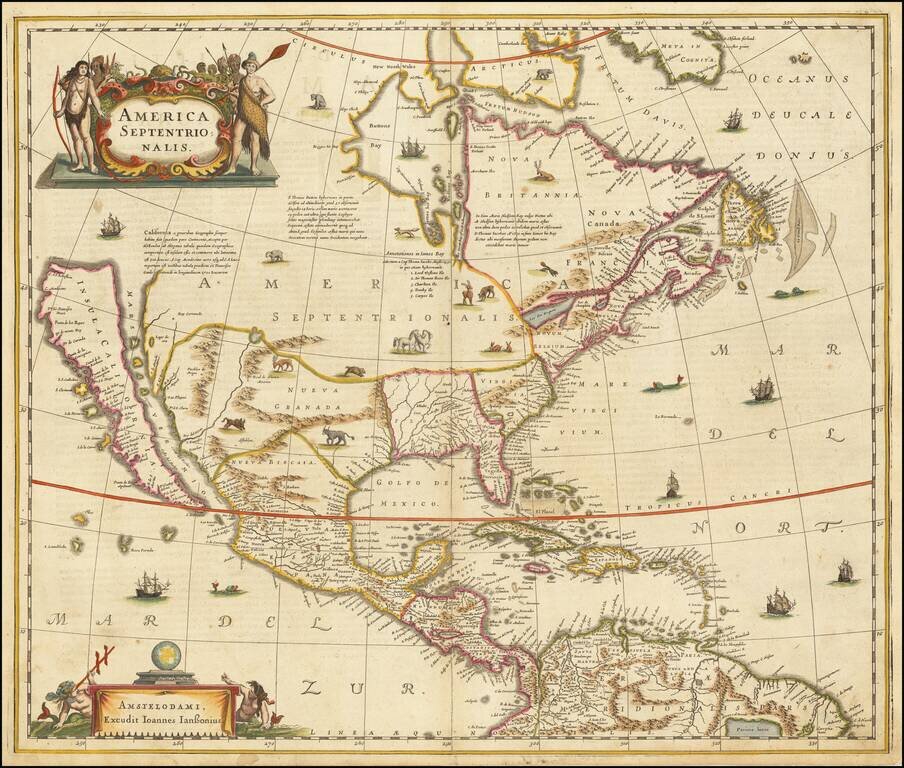 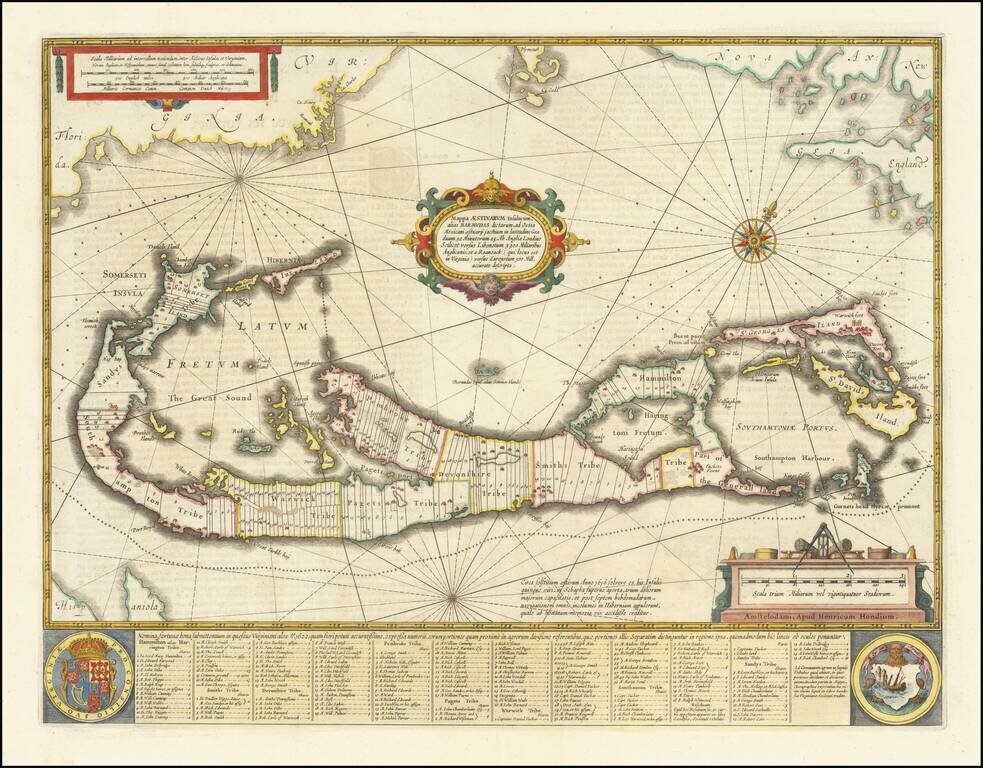 Nice example of Hondius' map of Bermuda, with decorative cartouche, compass rose, and other embellishments. The map is based upon John Norwood's survey of 1618, as first published by John Speed in 1626-27. The text at the bottom includes a division... 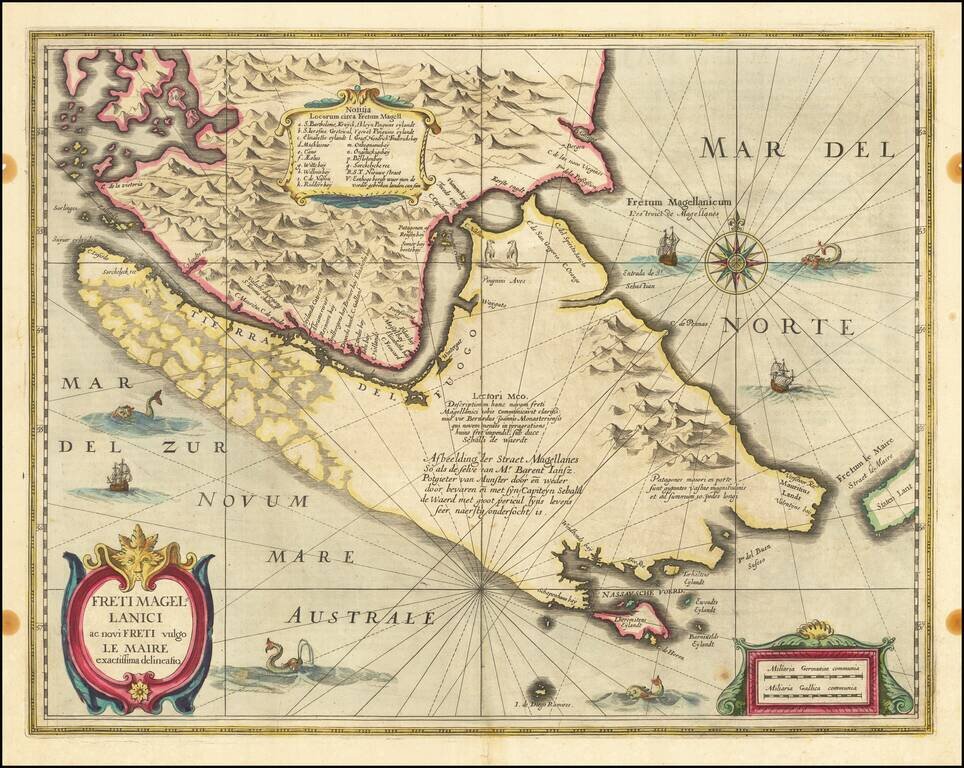 Nice example of the English edition of Hondius' map of the Straits of Magellan, Le Mair Strait, Fire Lands and the southern tip of Patagonia. The coastlines of Tierra del Fuego are incomplete. Fully engraved to show the mountainous terrain with no... 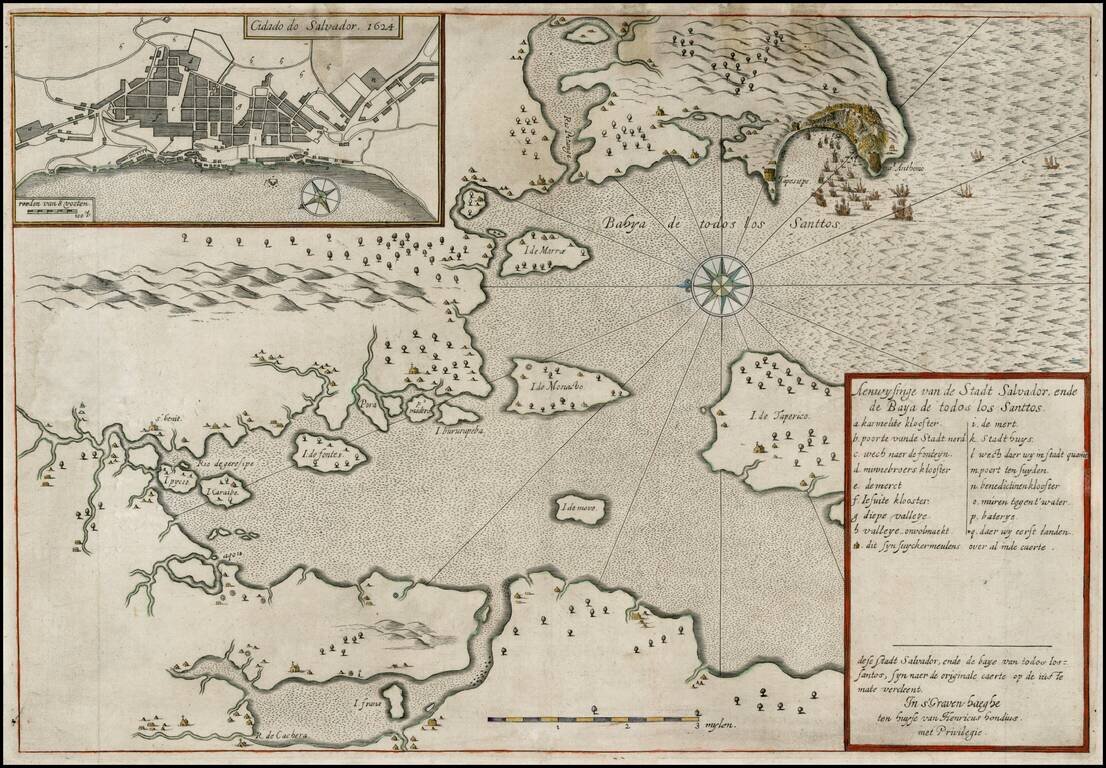 Rare early map of Bahia de los Todos Santos, Brazil, and inset plan of "Cidado do Salvador" by Henricus Hondius. The plan depicts the taking of Salvador and the neighboring regions by the Dutch in 1624. As noted by Johannes Keuning ( Imago Mundi, Vol.... 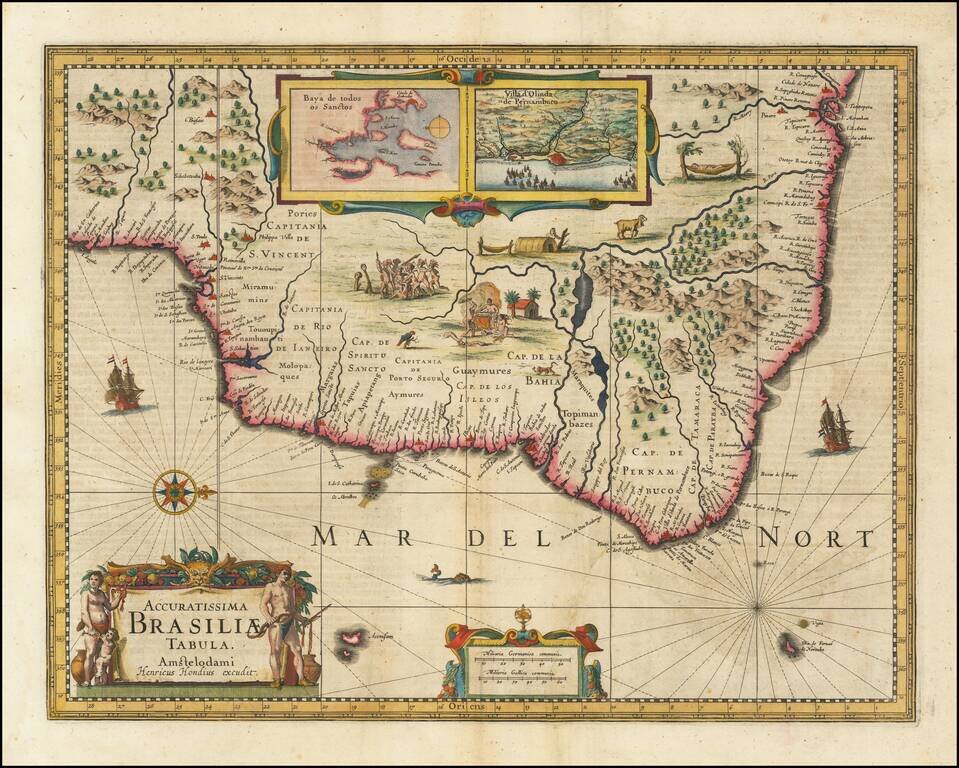 Strikng full color example of Hondius' map of Brazil, oriented with West at the top. Brazil is divided into Capitanias, with excellent coastal detail and a more speculative detail in the interior parts of the map. Includes inset vignettes of... 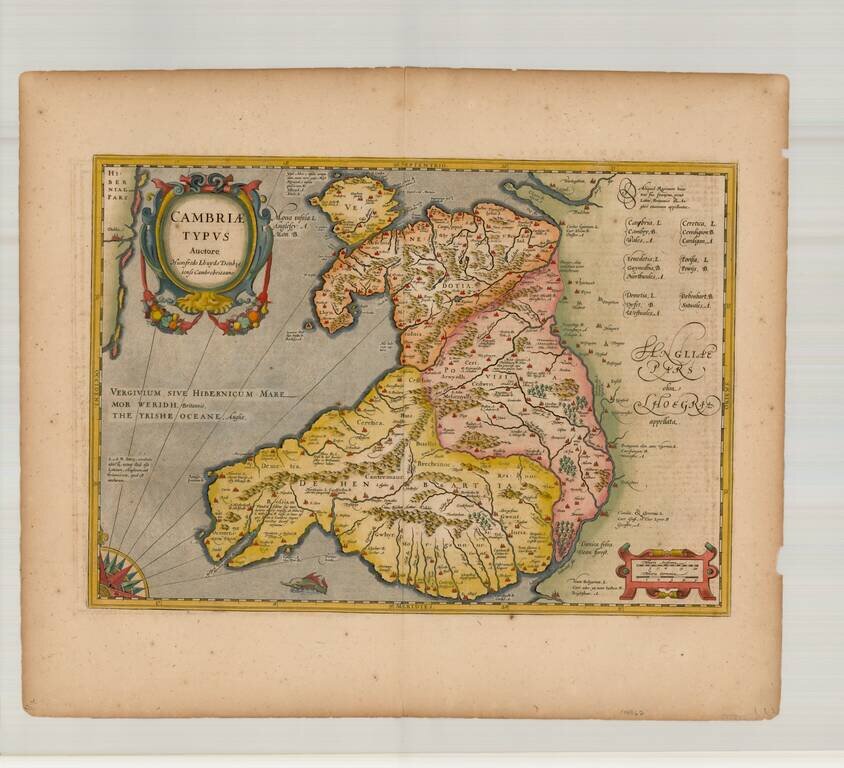 Second state of this finely engraved map of Wales, with new decorative cartouche. The map is derived from the Welsh cartographer Humphrey Lhuyd's 1568 map, the first modern map of Wales. The map was revised and made slightly smaller in... 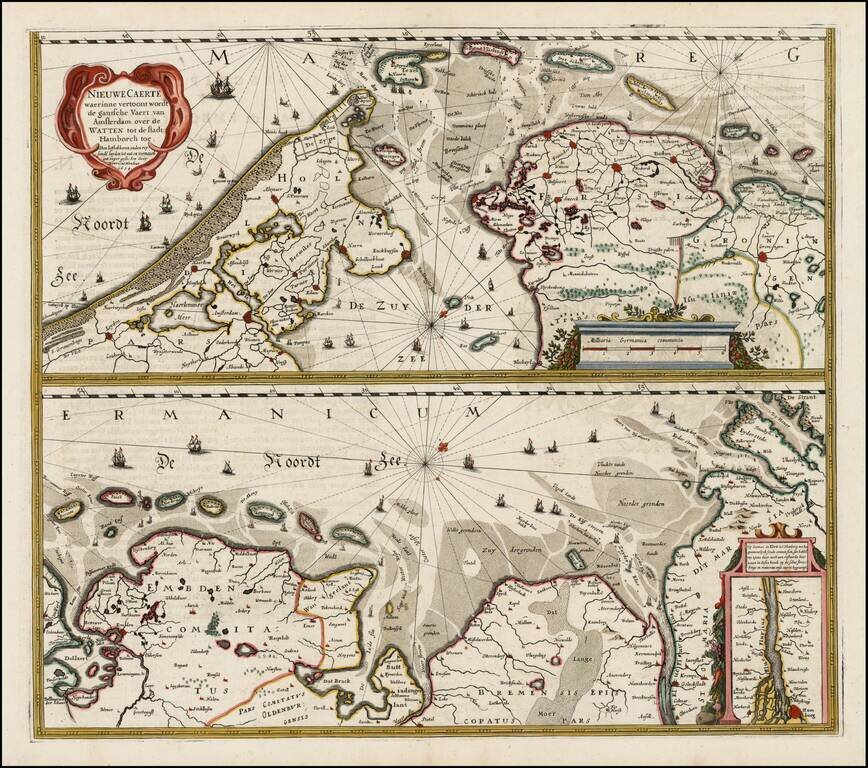 Nice example of Henricus Hondius' map of the Wadden Sea in two horizontal sections, published in Amsterdam. Interesting map of the major shipping routes between the Amsterdam and Hamburg in the Southern part of the North Sea. The map was first issued... 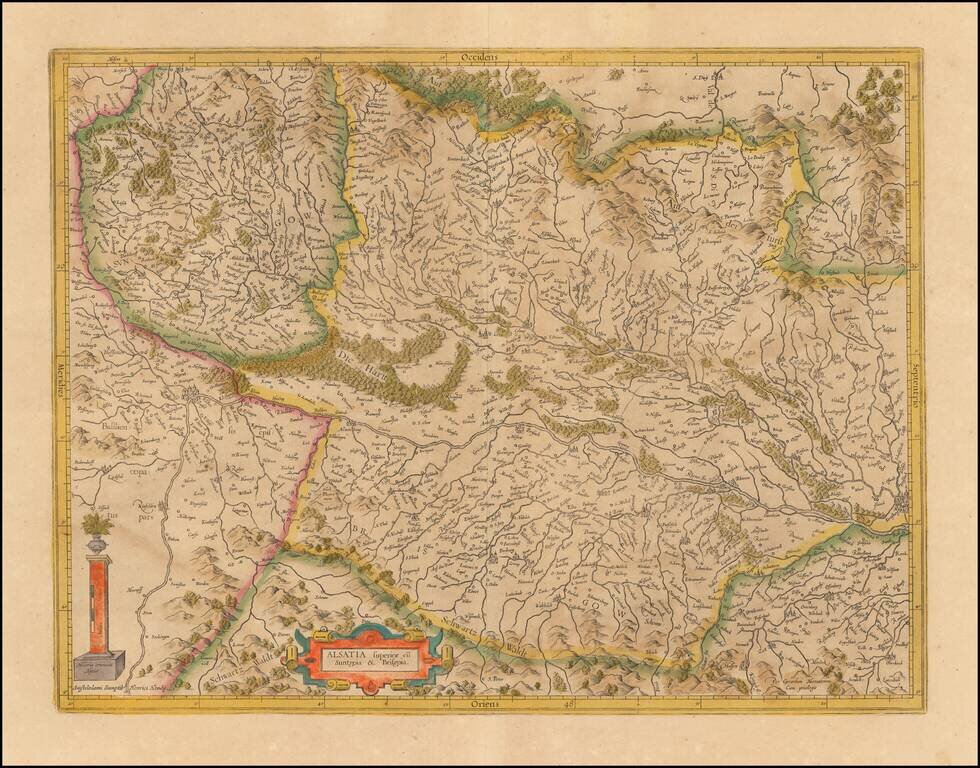 Nice old color example of the Mercator-Hondius map of part of Alsatia. West is oriented on the top. The map is centered on the course of the Rhine River, from Strasbourg in the north (right side of ma) to Basle. 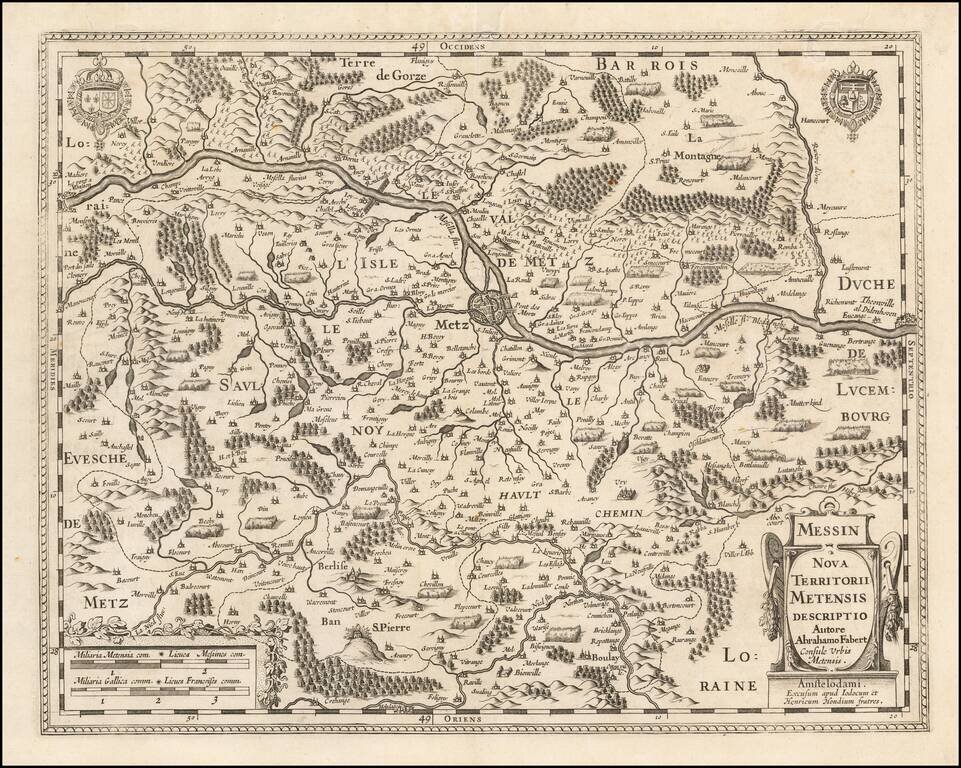 Striking example of Jodocus and Henricus Hondius' map of a portion of the Metz region of northeastern France. The map is centered on Metz and the Moselle River Region. The map is quite unusual, bearing the imprint of both Jodocus Hondius and Henricus... 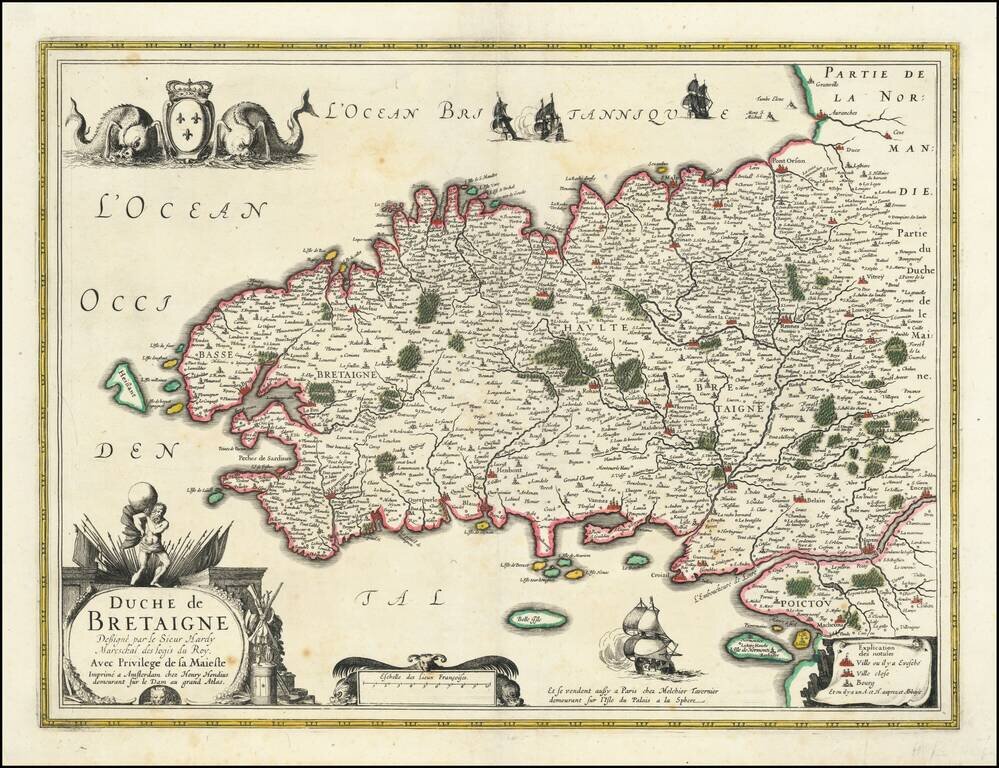 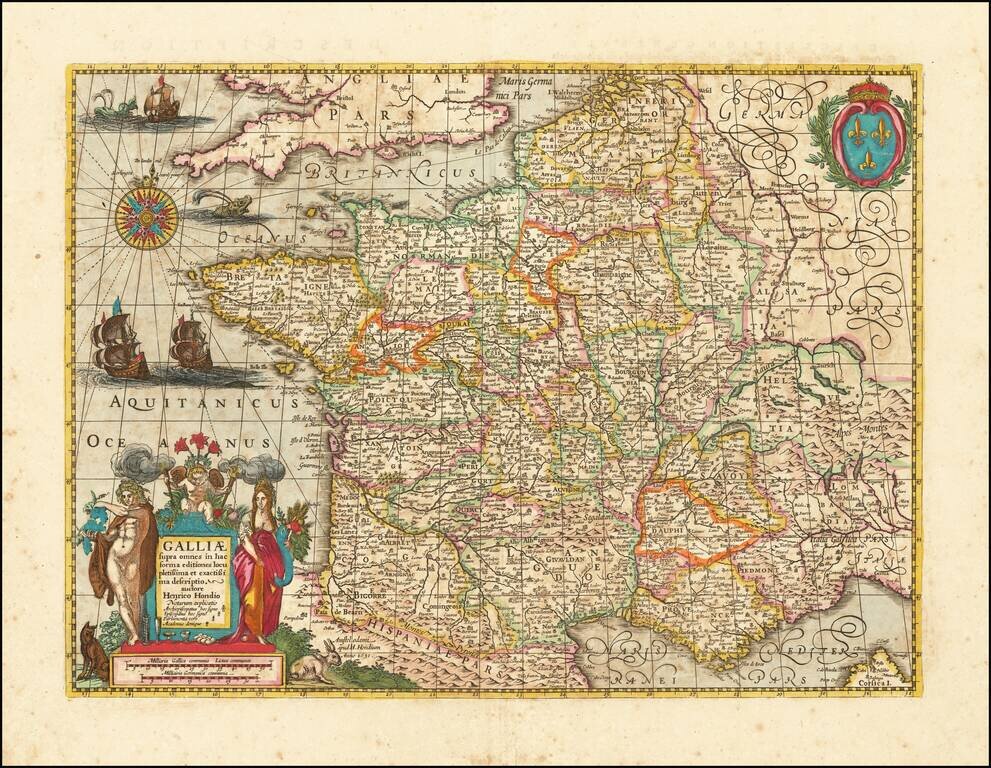 Early Dutch map of France, published in Amsterdam by Henricus Hondius. The map is finely engraved and embellished, including sailing ships, sea monsters, and an elaborate compass rose fill the sea. The royal armorial at upper right is balanced in the... 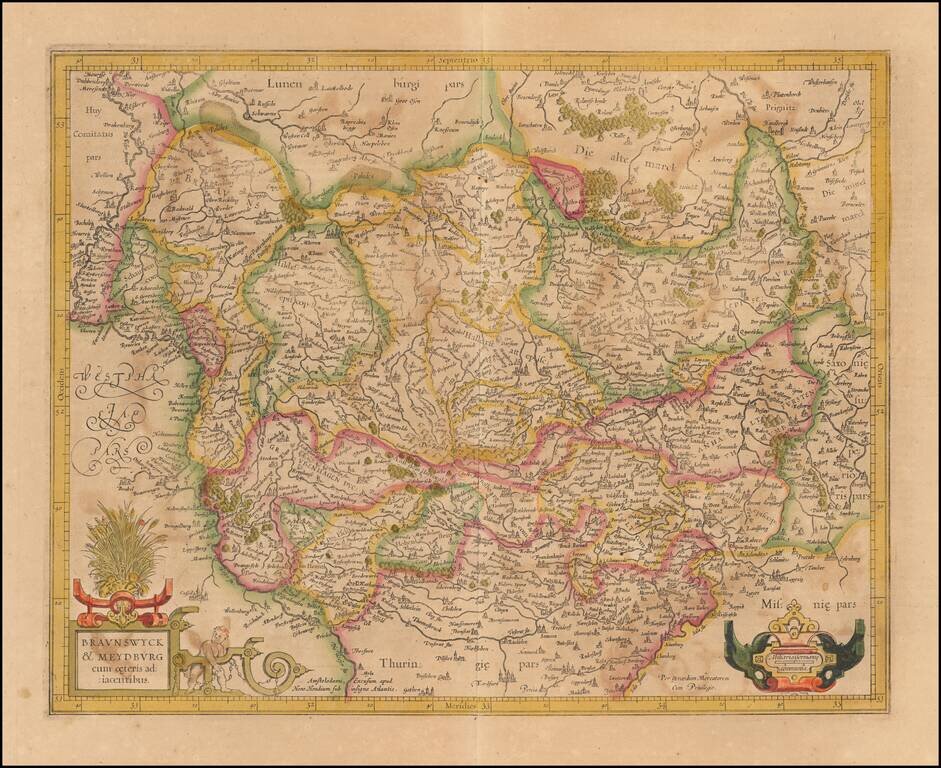 Old color example of Mercator's regional map of a part of Germany from an early edition of the Mercator-Hondius Atas. 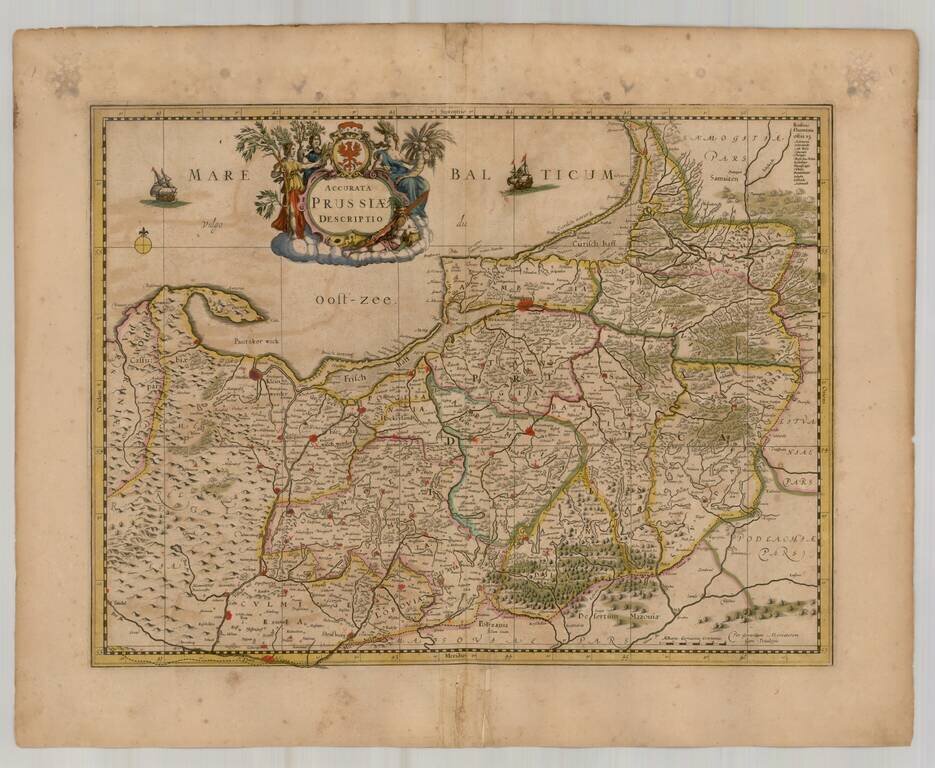 Scarce map of Prussia, published by Gerard Mercator in Amsterdam. Covers most of the North of Poland and parts of Kalingrad and Southern Lithuania. 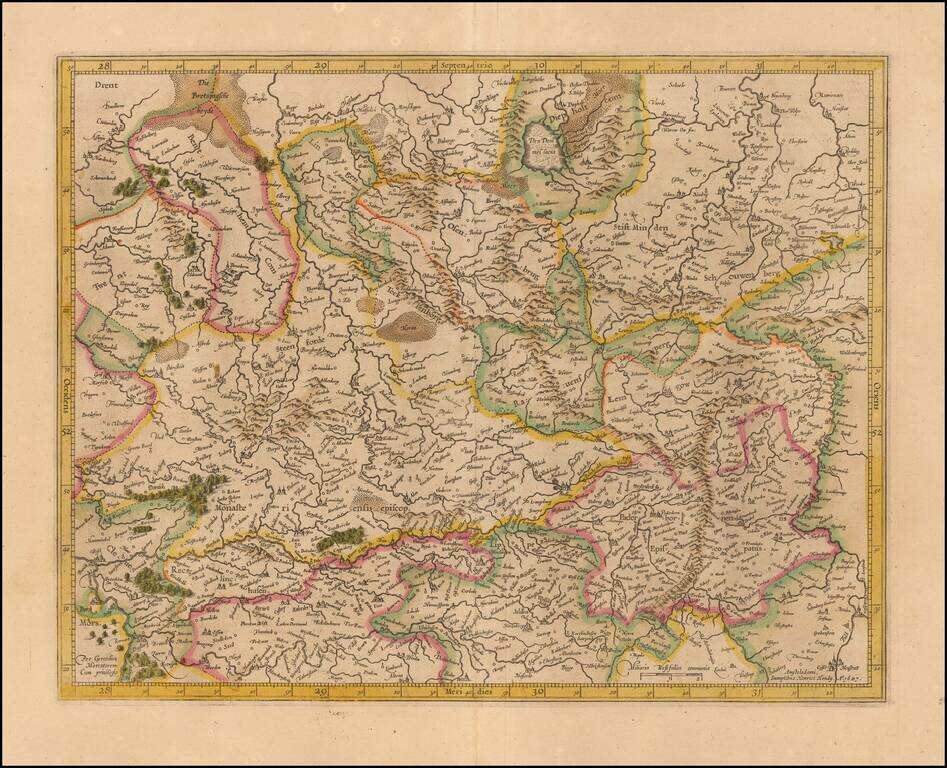 Nice example of the Mercator-Hondius regional map of Westphalia, in modern-day Germany. 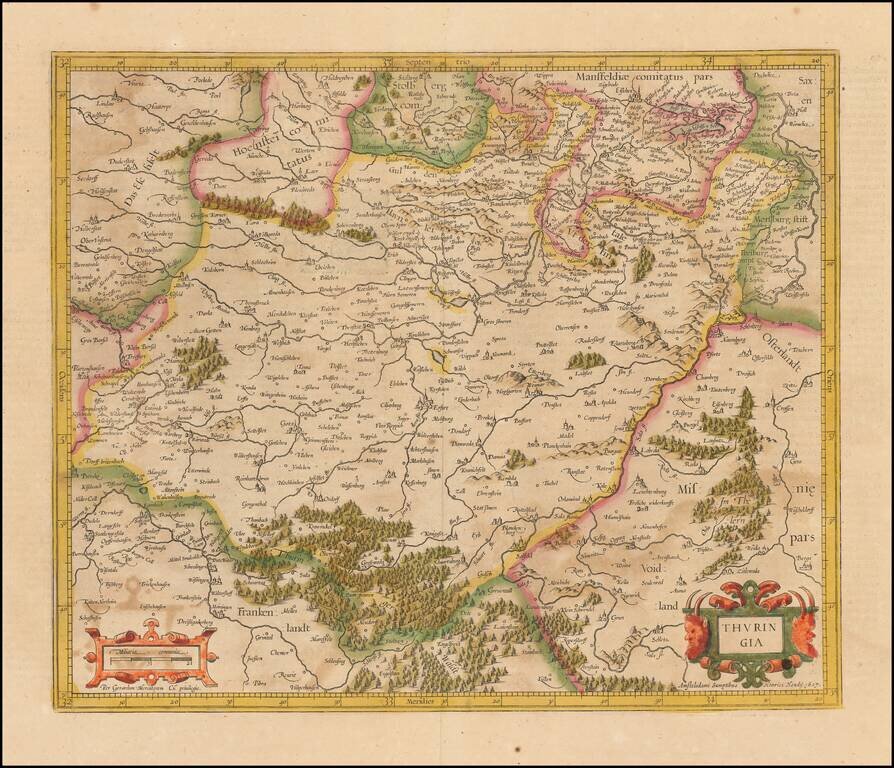 Old color example of Hondius' regional map of Germany, from the Atlas Sive Cosmograhia. The map is centered on Erfurt, Weimar and Gotha.