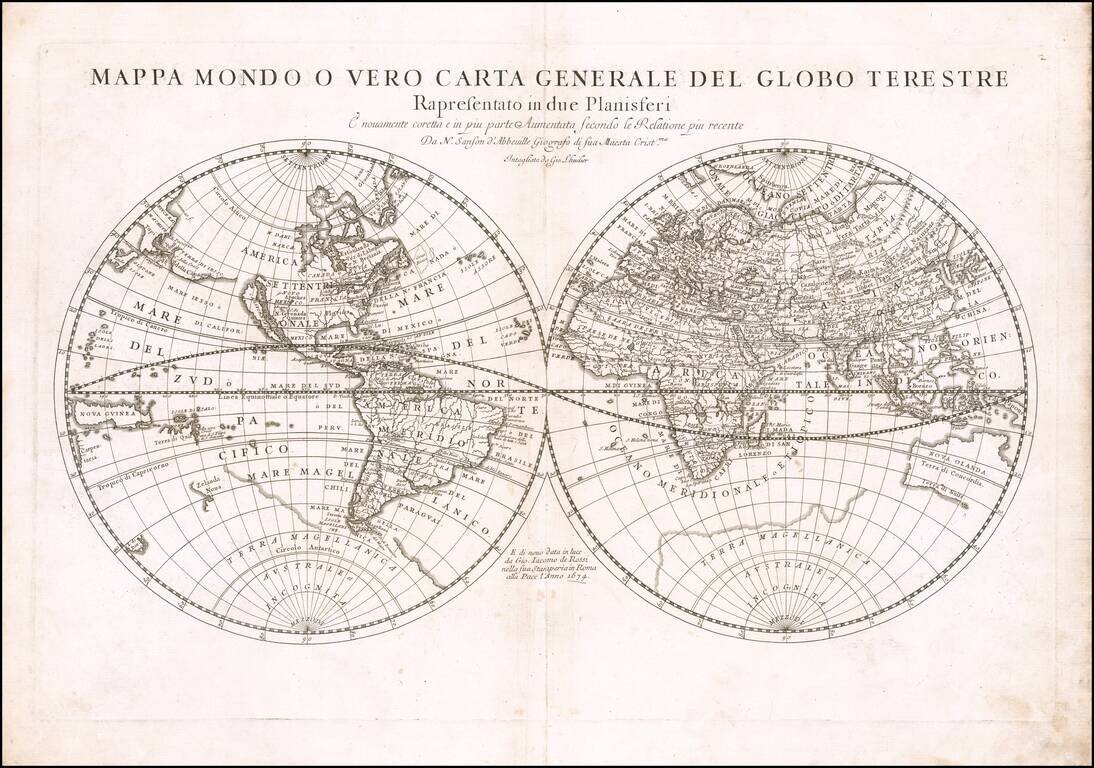 First state of Rossi's double hemisphere map of the world, based upon the work of Nicolas Sanson, the single most important French mapmaker of the 17th Century. His modernistic approach to cartography would redefine commercial cartography over the next... 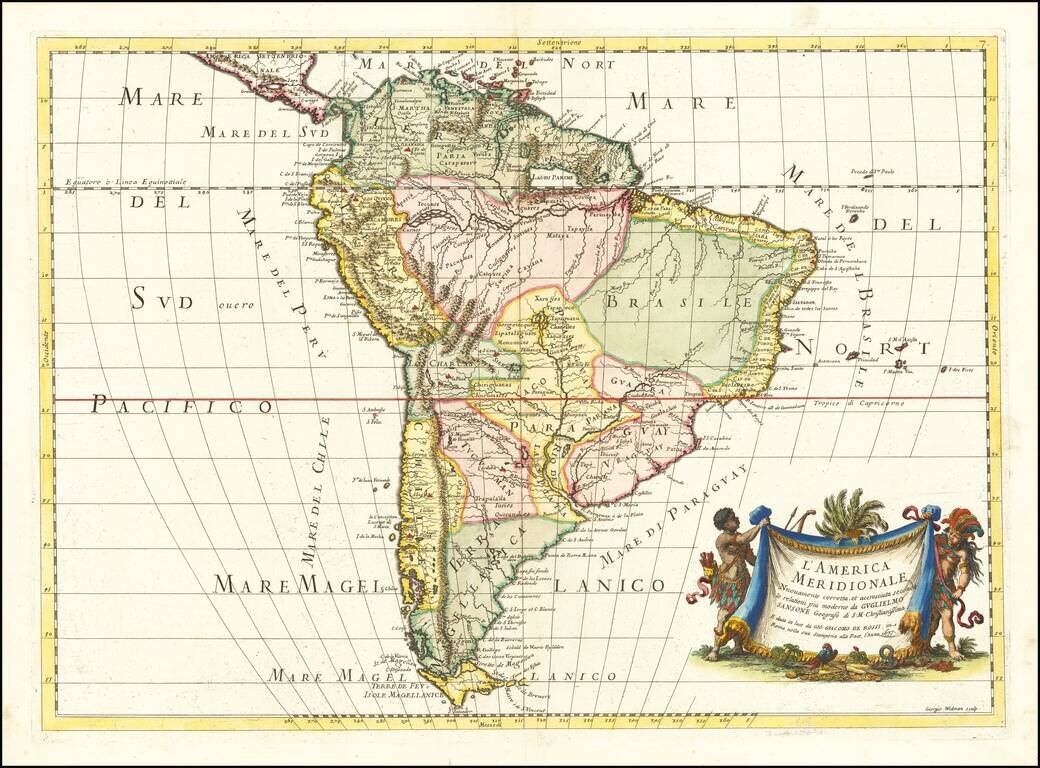 First edition of Rossi's map of South America, published in Rome. The map provides a fine detailed treatment of South America, based upon the work of Nicolas Sanson. The map is engraved by master engraver Giorgio Widman. A later edition was issued... 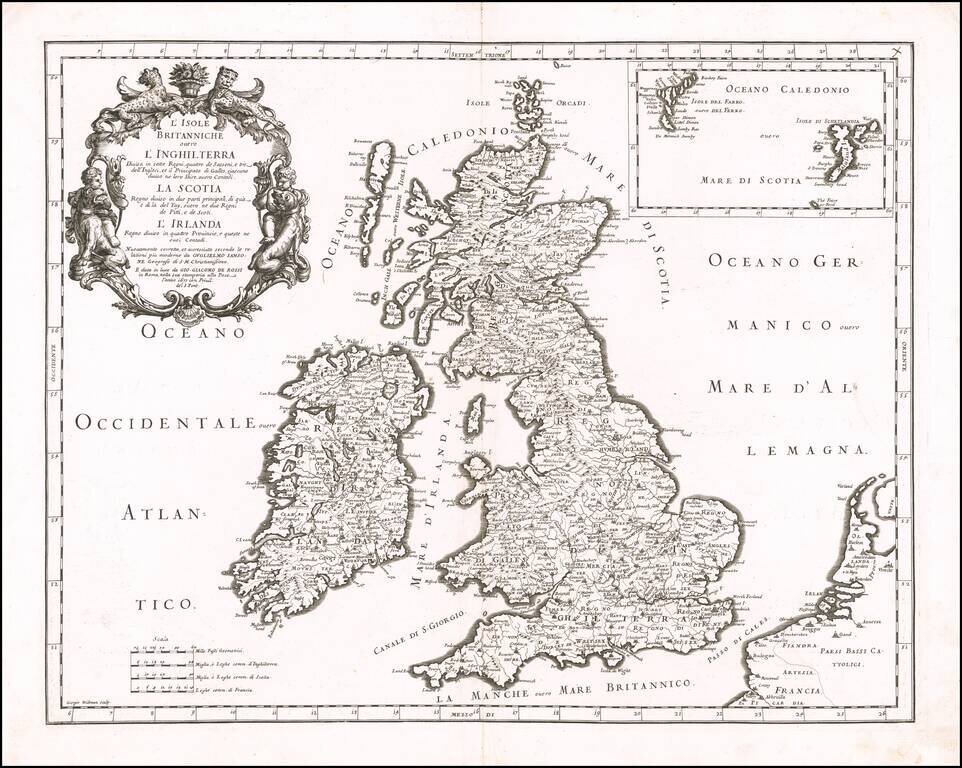 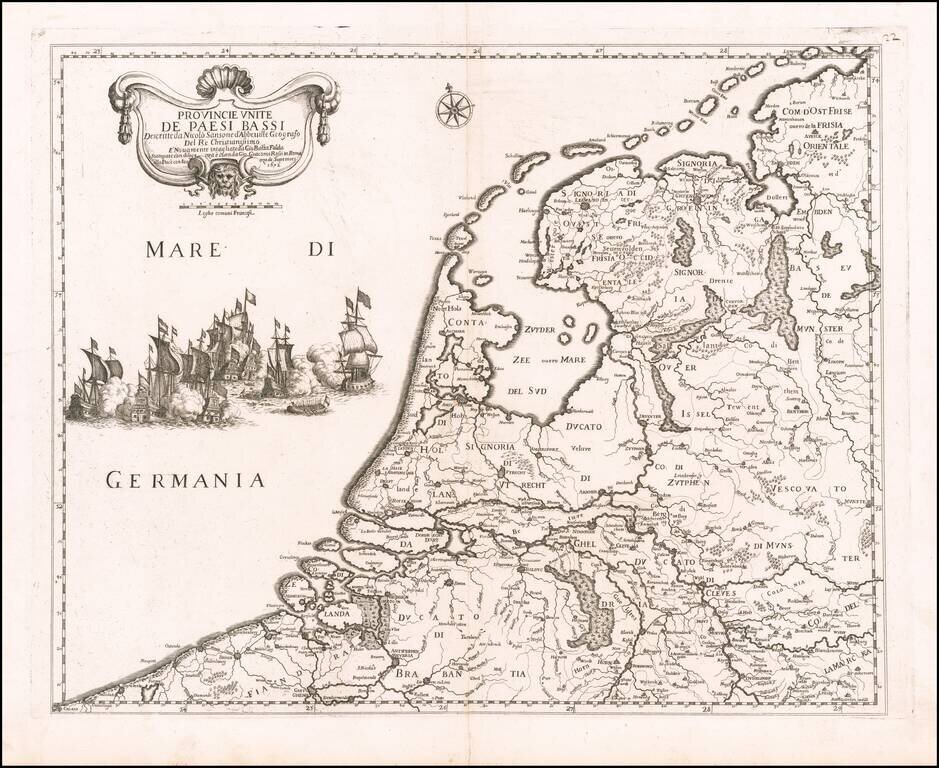 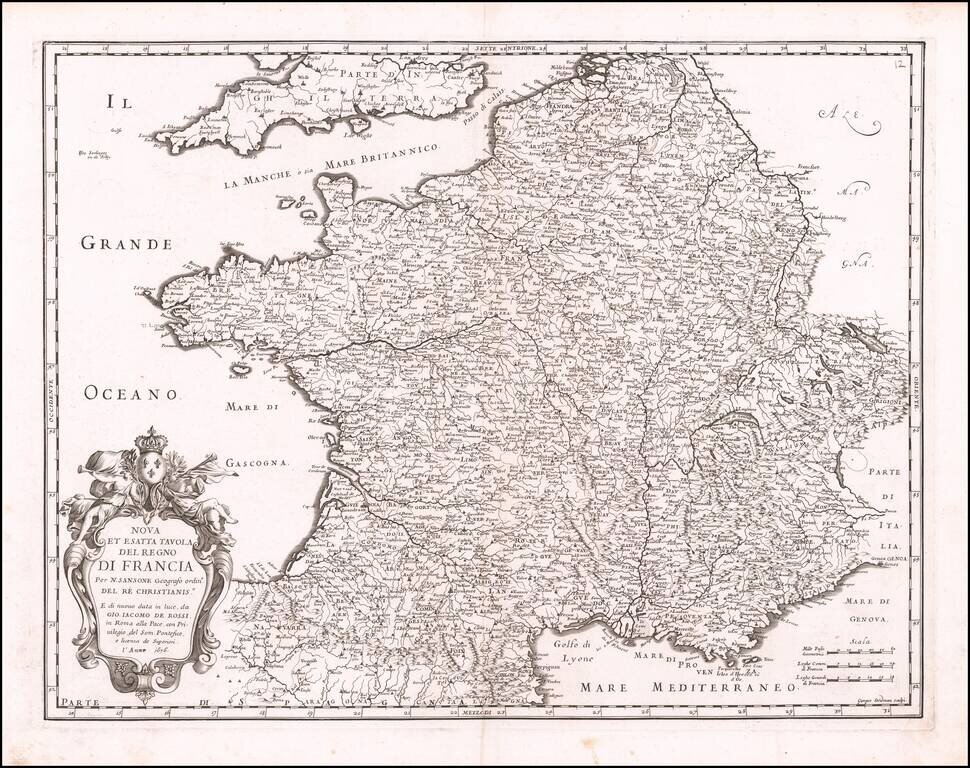 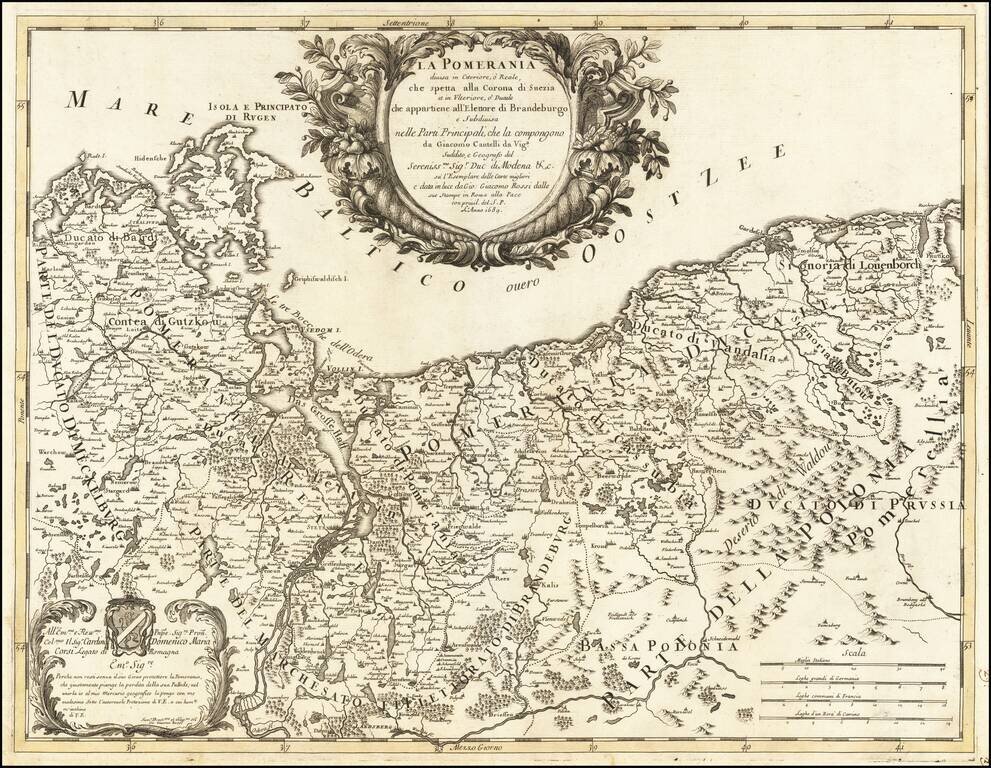 "Why would you not live without your joyous protector, O Pomerania, region that justly mourns the loss of its Palatine?" A scarce map of Pomerania, stretching along the coast from present-day eastern Germany to the outskirts of Gdansk in modern... 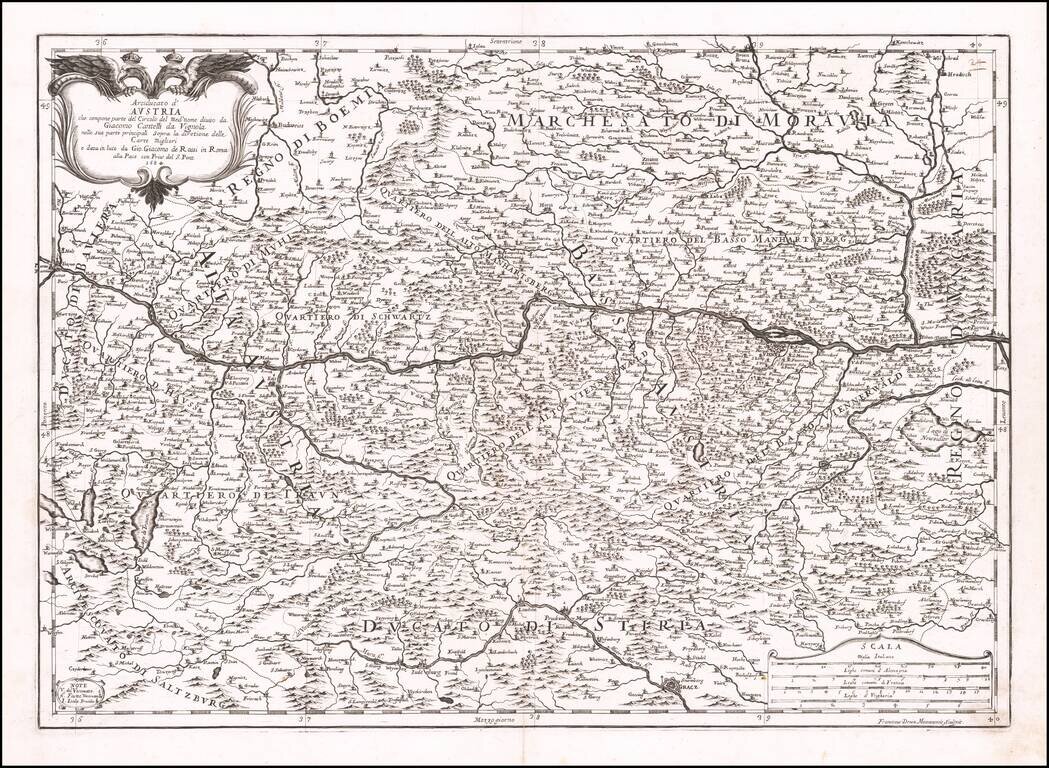 Scarce Cantelli-Rossi map of Austria, first published by Rossi in 1684. The map tracks the Danube from Passau to Pressburg (Bratislava), and from Moravia in the north to Stiria in the south. 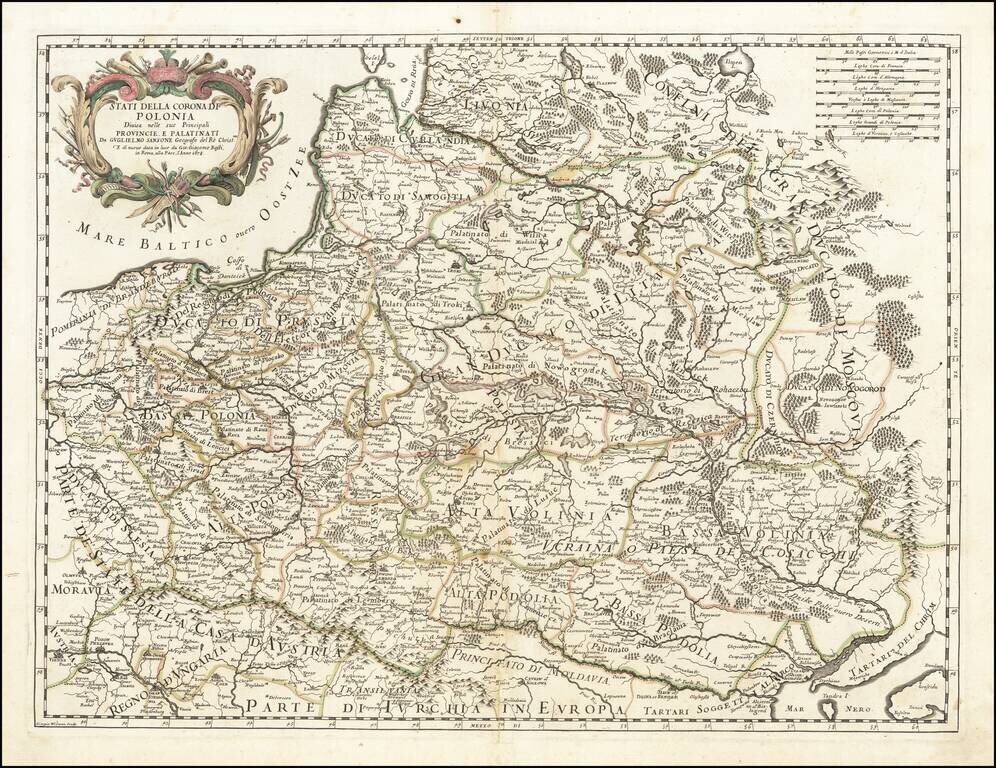 Rare separately issued map of Poland, published by Giacomo Rossi. Rossi's maps are often based on the cartography of Nicolas Sanson, although the present example gives credit to Nicolas's son, Guillaume Sanson. This map was followed by a similar map... 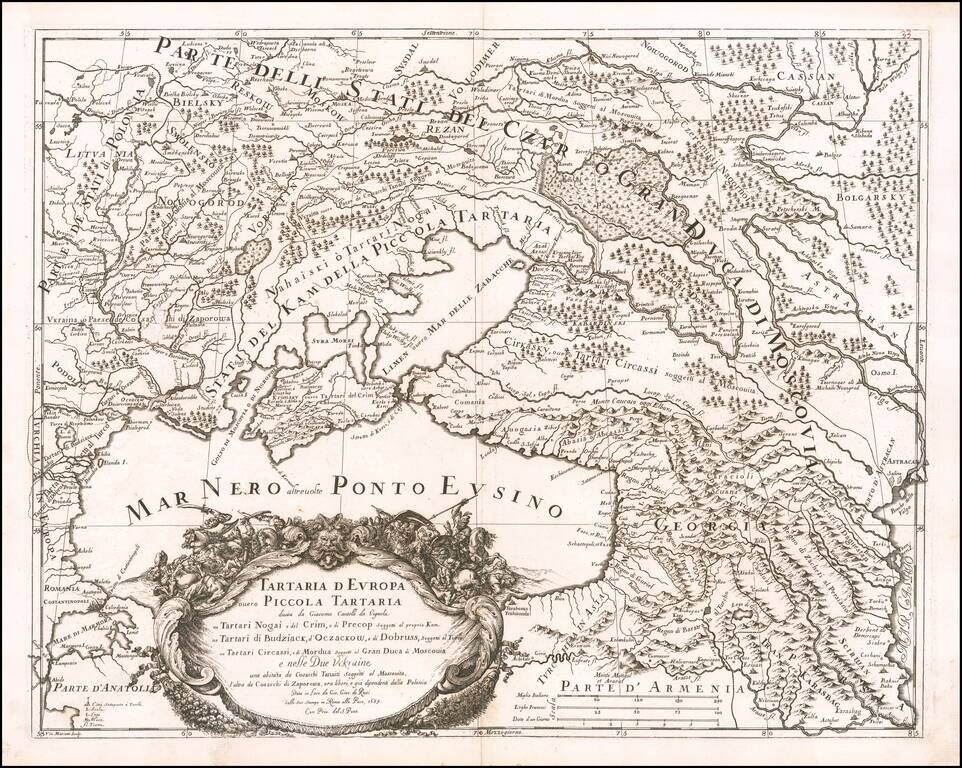 Rare map of the Ukraine, Georgia, Moscovy, Southeastern Poland / Lithuania and the Black Sea, by Cantelli da Vignola and published in Rome by Rossi. The map provides one of the most detailed and up to date treatments the area centered on the newly... 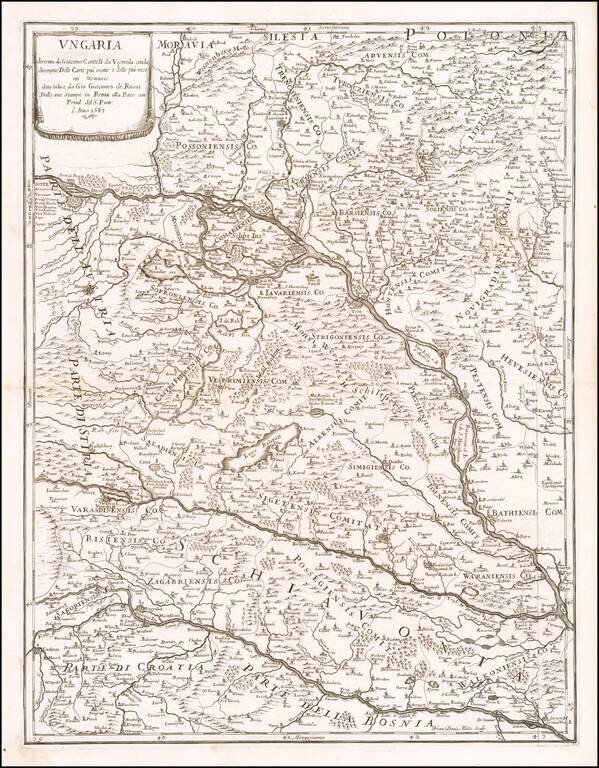 Scarce map of Hungary, Slovenia and part of Croatia and Bosnia, first published by Rossi in 1683. The map extends from the Saw River and Tributaries to the area to the north of the Danube. 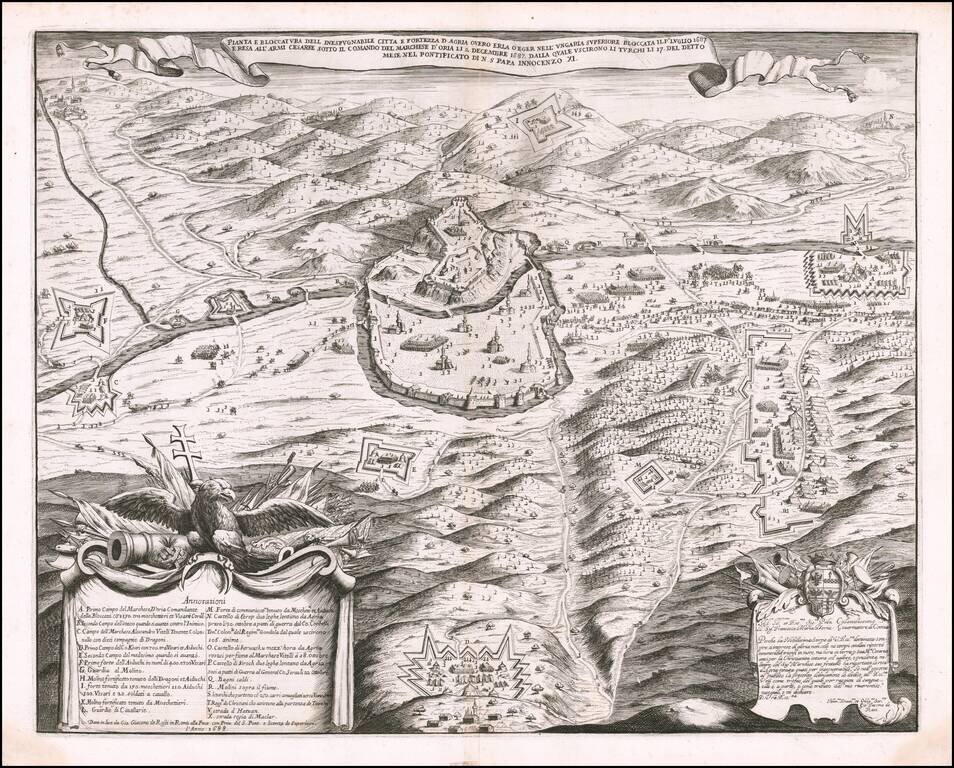 Rare separately published map showing the Siege of Eger, published in Rome in 1688. The Siege of Lorraine was undertaken by a Holy League force, led by Charles of Lorraine. The key at the lower left of the map shows the positions, encampments,... 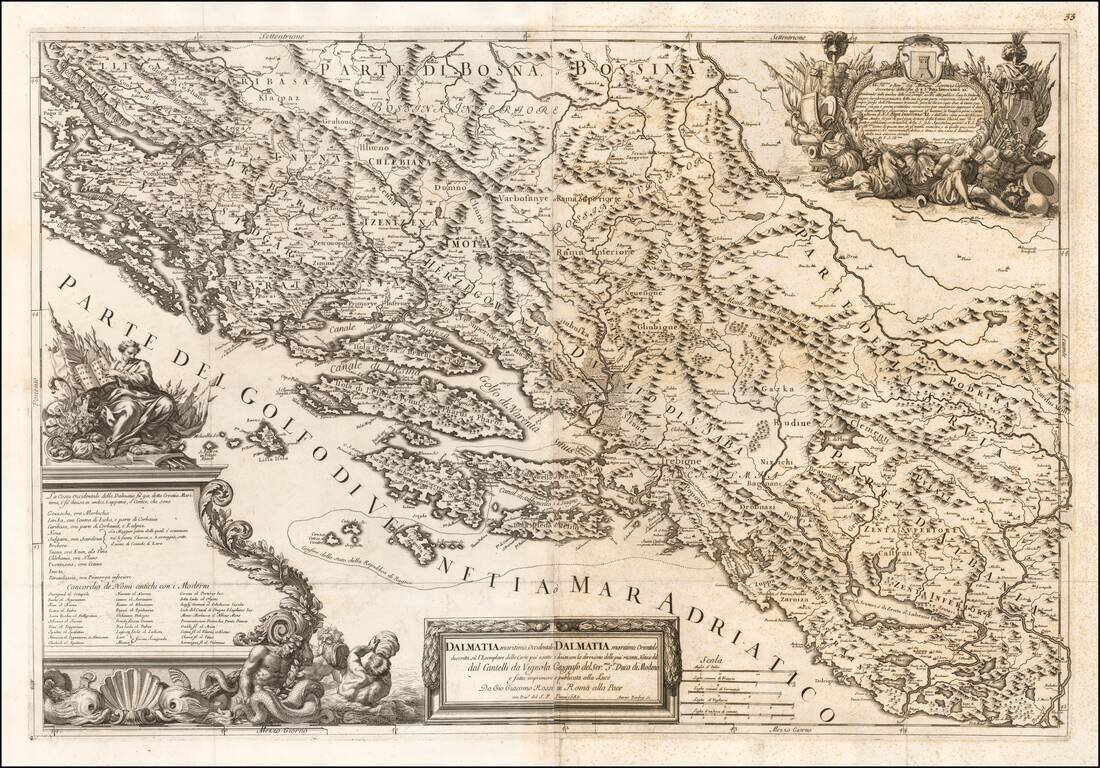 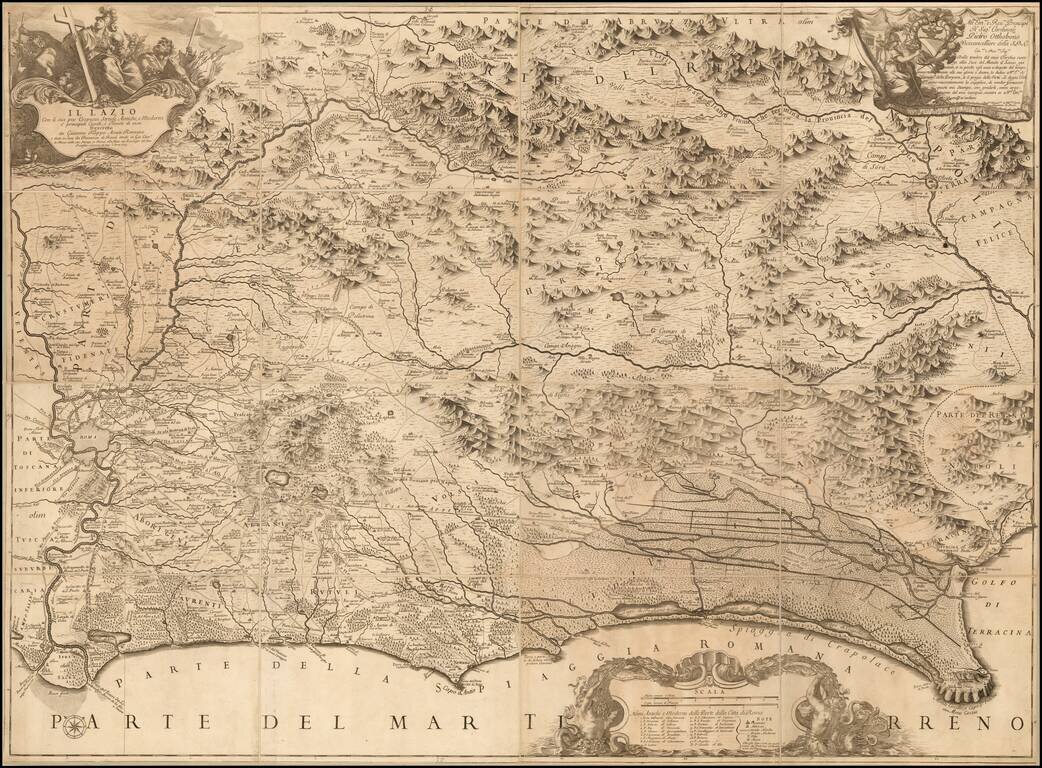 Nice example of Rossi's 4 sheet map of the Lazio region, including Rome, first published in 1693. The map shows the Lazio territory from Rome to Circeo, with incredible detail. Drawn and engraved by Giacomo Filippo Ameti. The cartouche in the upper... 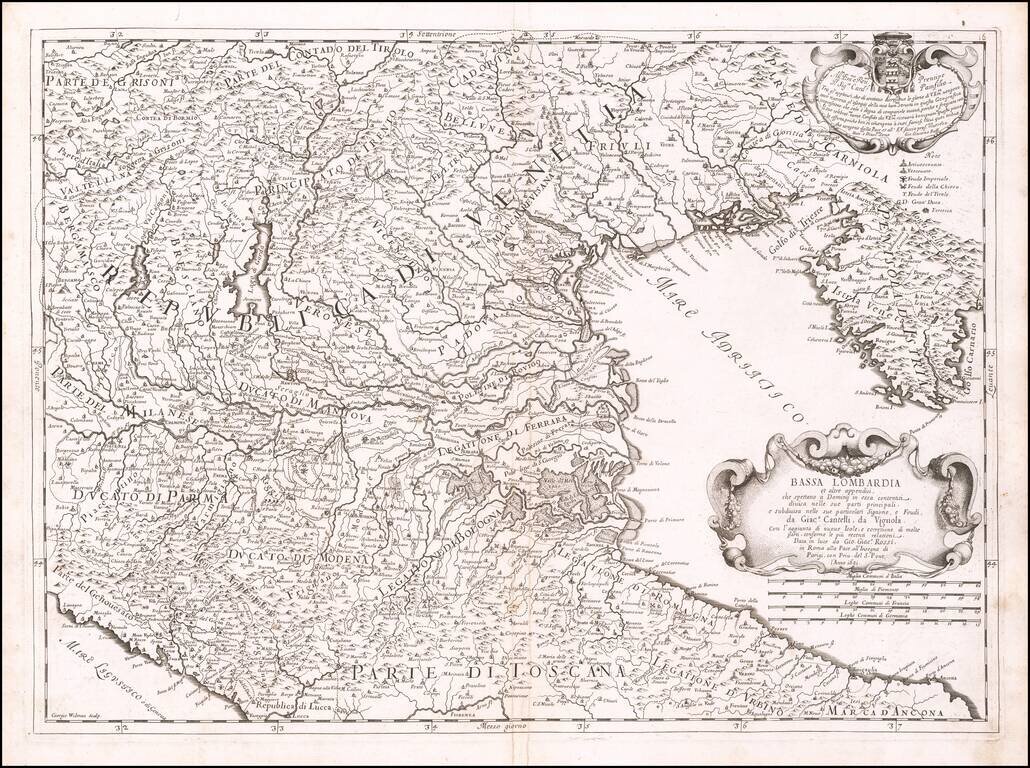 Scarce map of part of lower Lombardia, the Gulf of Venice and Istria, from Rossi's rare Mercurio Geografico. The map is a tremendous example of the fine topographical style of Rossi's maps, elegantly tracing rivers through steep and well defined... 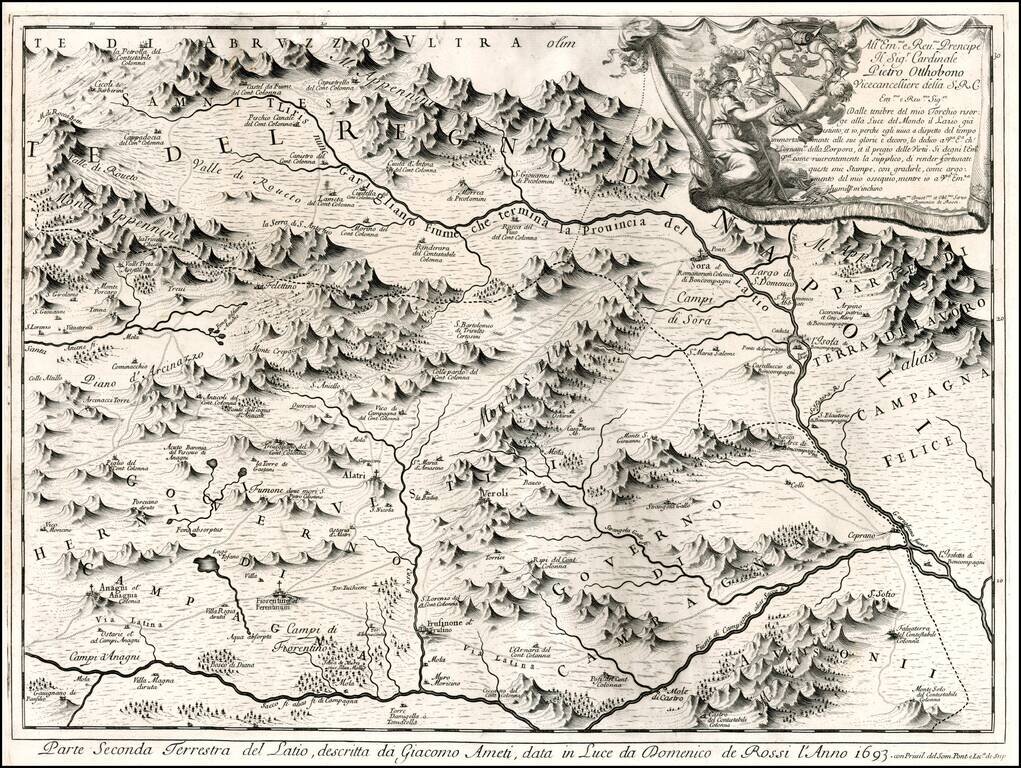 Scarce map of a portion of part of the Kingdom of Napoli, centered on the Gargliano River. The map is a tremendous example of the fine topograpical style of Rossi's maps, elegantly tracing rivers through steep defined mountain valleys. Includes a key... 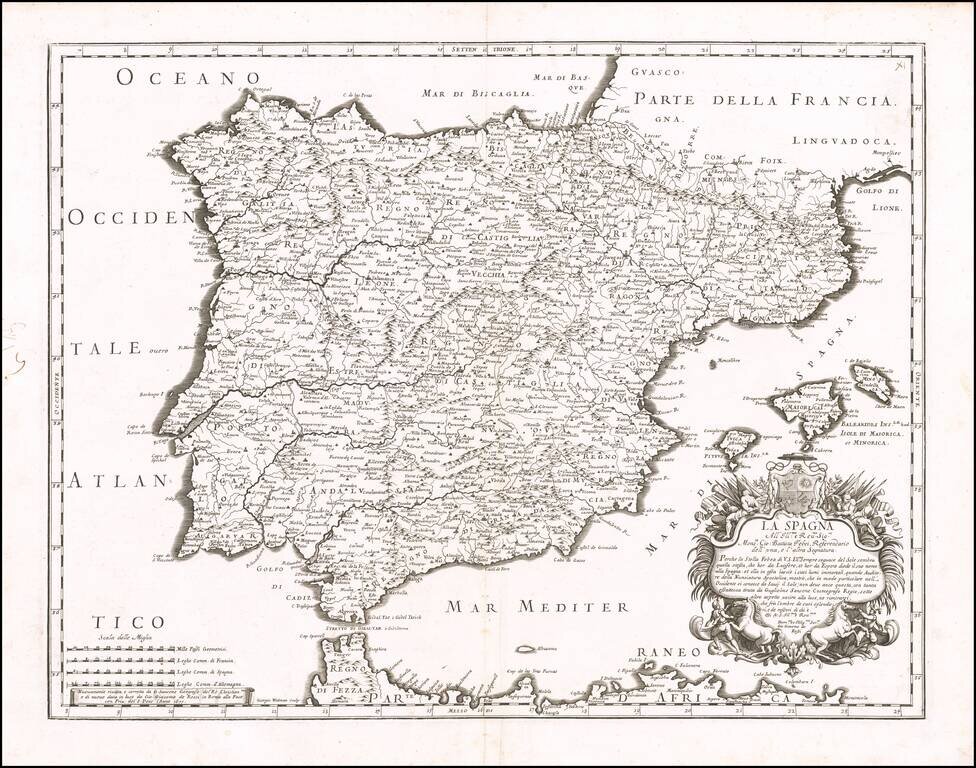