When the Hydrographic Office opened in 1795, it was tasked with creating and producing all the nautical charts for the Royal Navy so as to wean the Navy off dependence on foreign charts. By the 1820s, private publishers were augmenting HO charts and competing with them, including Richard Holmes Laurie. Richard gave up publishing anything except nautical materials by 1830. He also sold charts to Trinity House, the lighthouse and maritime safety fraternity. He died in 1858.

The firm continued to print under the name R.H. Laurie even after 1858. Later, the firm was managed by Laurie’s draughtsman, Alexander George Findlay, and, later, Daniel and William Kettle.

1799 - Asia and its Islands, According to D'Anville; Divided into Empires, Kingdoms, States, Regions &c. . . . In The East Indies and An Exact Delineation of all the Discoveries made in the Eastern Parts By The English under Captns. Cook, Vancouver & Peyrouse . 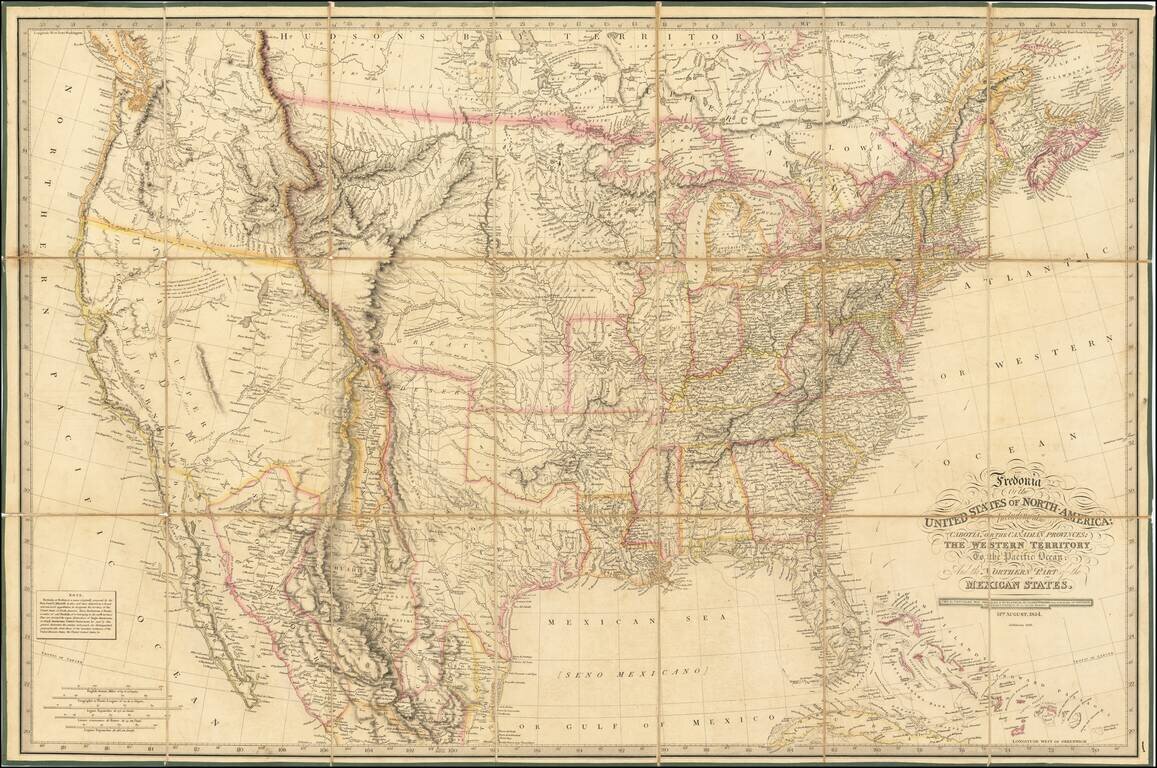 1836 - Fredonia Or The United States of North America; Including also Cabotia, or the Canadian Provinces; The Western Territory To the Pacific Ocean And the Northern Part of the Mexican States . . . 14th August, 1834. Additions to 1836

Rare 1836 edition of Laurie's Fredonia, which has been substantially updated in Texas and the West. First issued in 1830, the map faithfully incorporates information from all important early explorations, including Lewis & Clark, Stephen Long, and... 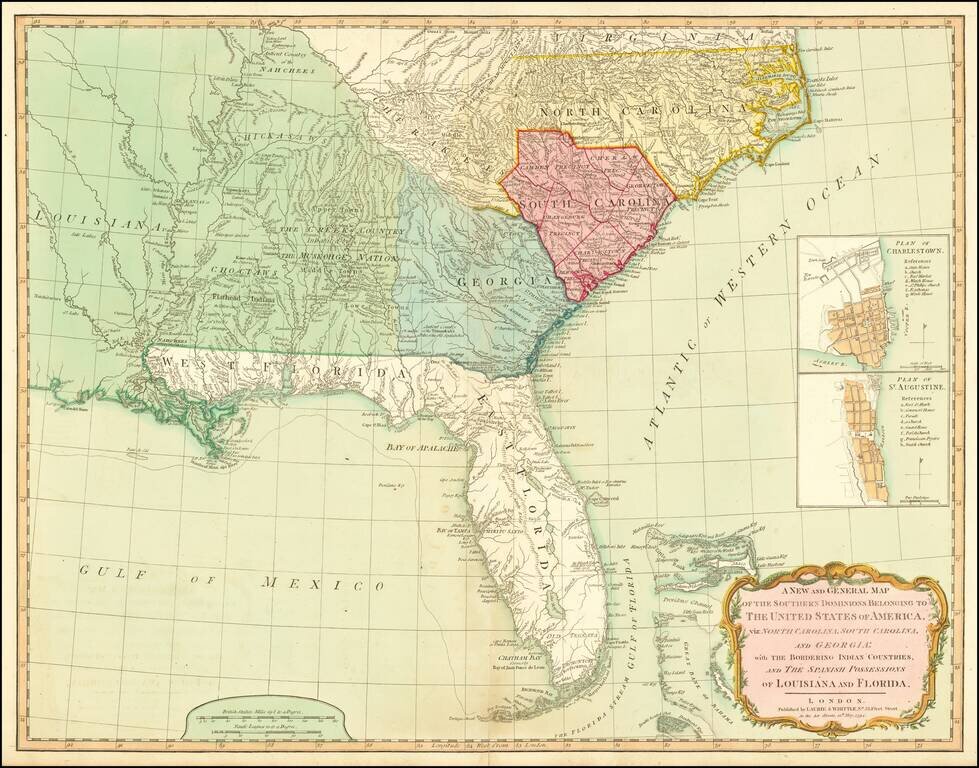 1794 - A New and General Map of the Southern Dominions Belonging to The United States of America, viz North Carolina, South Carolina, and Georgia: with the bordering Indian Countries, and the Spanish Possessions of Louisiana and Florida . . 1794

A Fine 18th Century Map of the Southern United States & Florida with Early Plans of Charleston and St. Augustine Laurie & Whittle's edition of this scarce map of the Southern States and Florida, originally compiled by Bernard Romans for the... 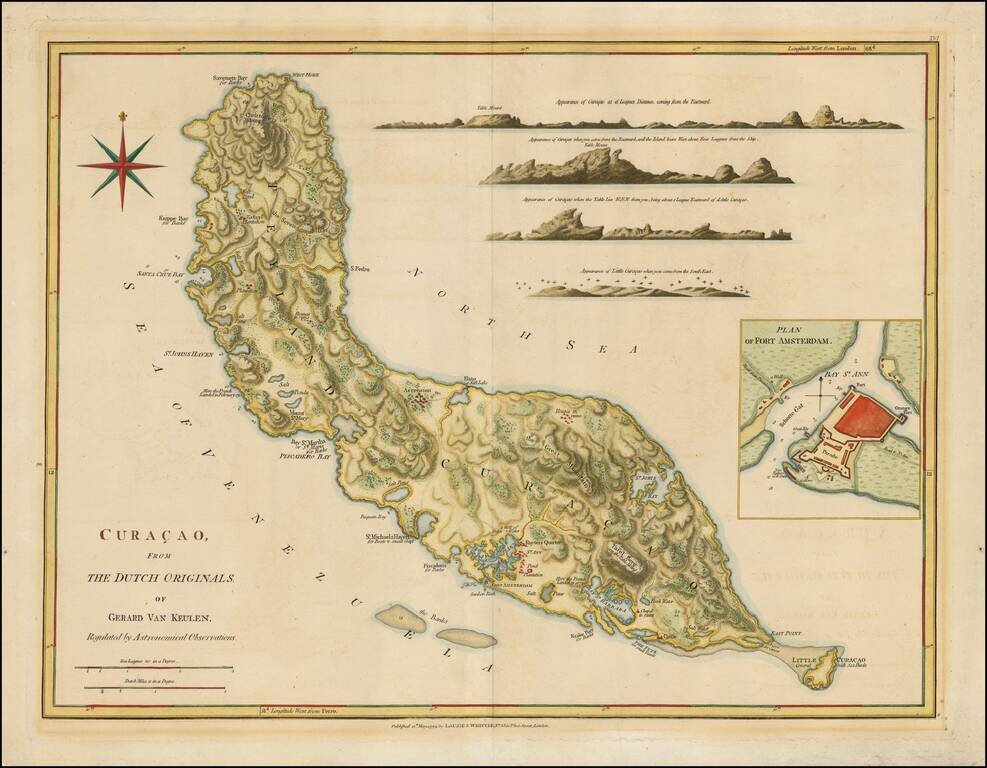 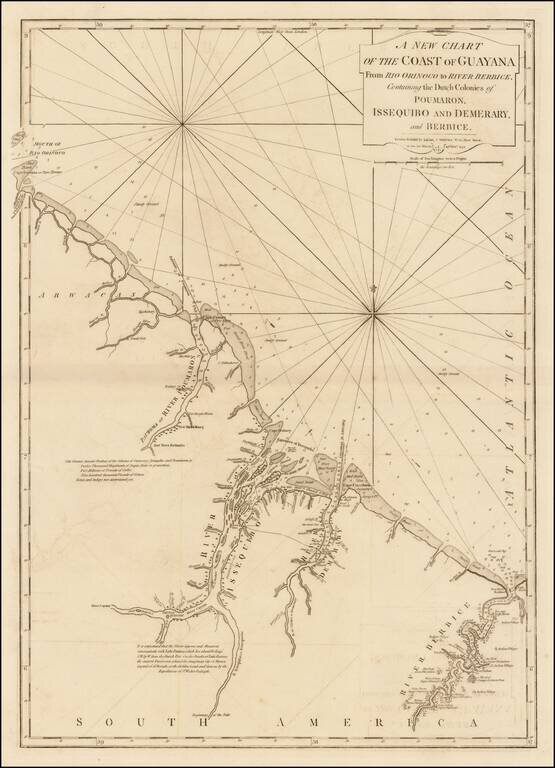 1795 - A New Chart of the Coast of Guayana From Rio Orinoco to River Berbice, Containing the Dutch Colonies of Pourmaron, Issequibo and Demerary, and Berbice . . . 1795

Significantly revised and updated version of Laurie & Whittle's chart of the Dutch Colony of Guayana, from Jeffery's West India Atlas. The present chart has been significatnly updated from earlier editions. 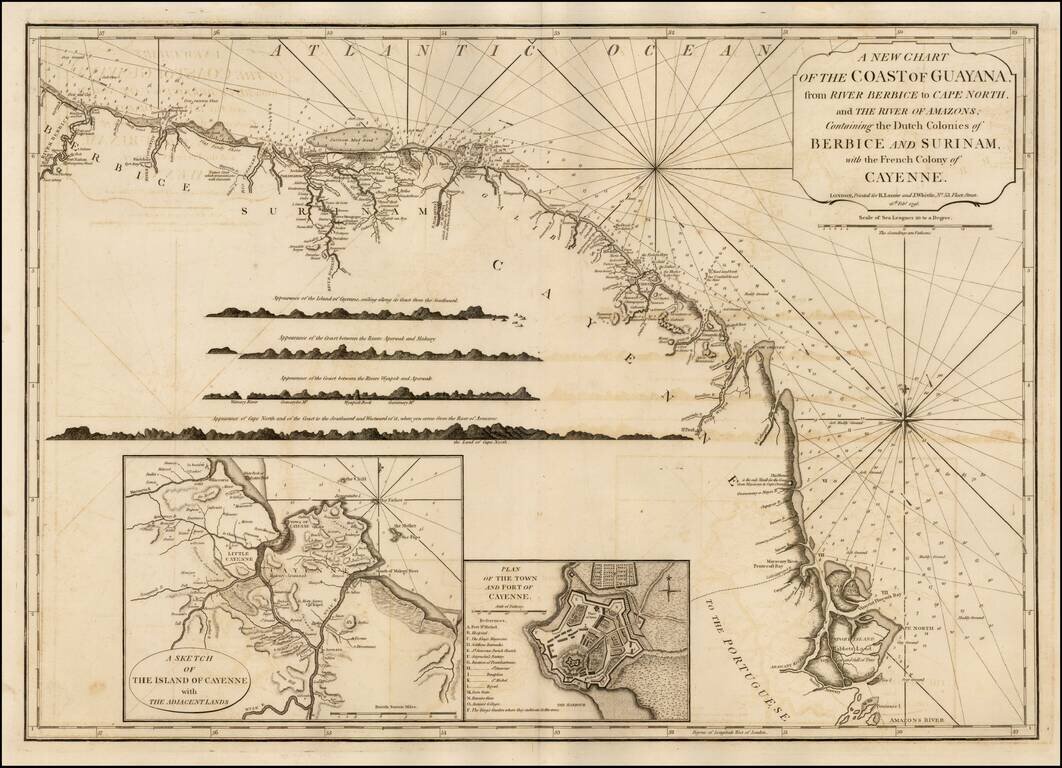 1796 - A New Chart of the Coast of Guayana, from River Berbice to Cape North and the Rivers of Amazons, Containing the Dutch Colonies Berbice and Surinam, and the French Colony of Cayenne. . . 1796 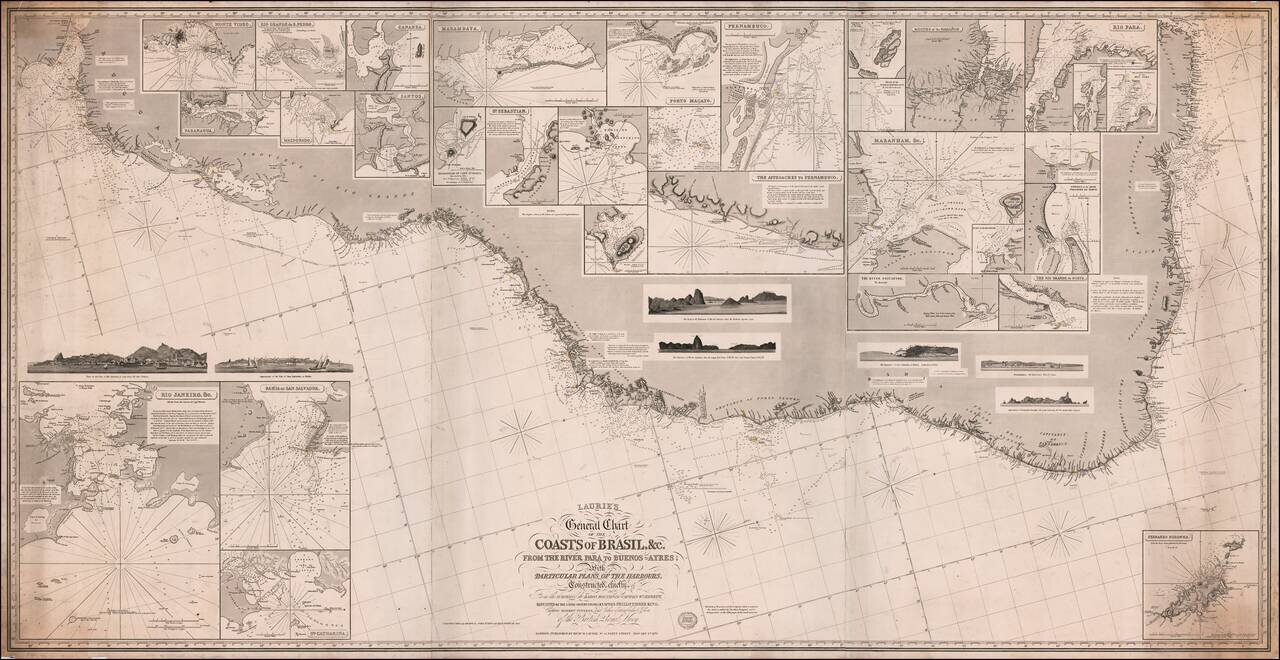 1870 - Laurie's General Chart of the Coasts of Brasil, &c. From The River Para to Buenos-Ayres; With Particular Plans of the Harbours. Constructed chiefly From the surveys of the Baron Roussin and Captain Wm. Hewett, Adjusted by the later observations of Capta

Fine large format sea chart of the coast of Brazil and Paraguay, published by Richard Laurie in London. The map includes inset plans of a number of Brazilian and other harbors, including: Rio de Janeiro Bahia San Salvador Montevideo Rio Grande... 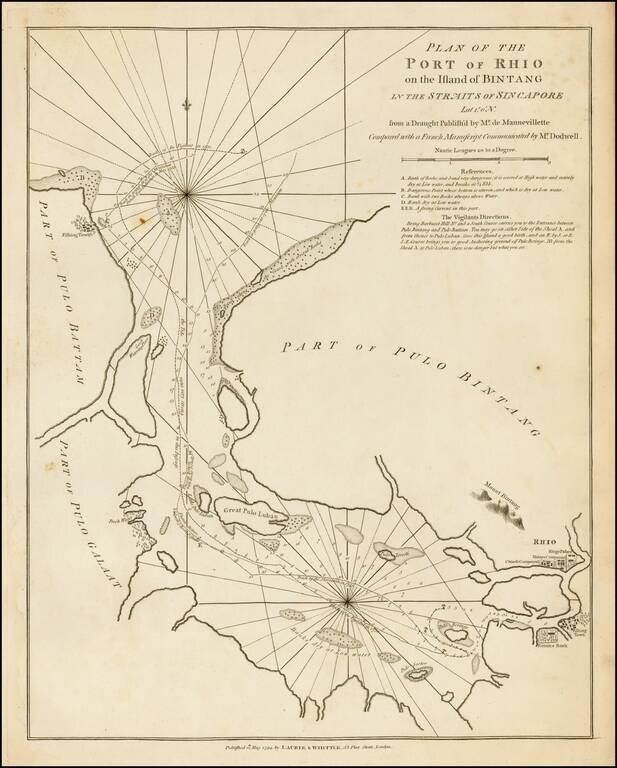 A fine large format 18th-century sea chart of Bintan and Batam Islands, Indonesia, located on the Singapore Straits, published by the firm of Laurie & Whittle. Bintan Island (formerly known as Bintang) and the adjacent island of Batam (Bataam) are... 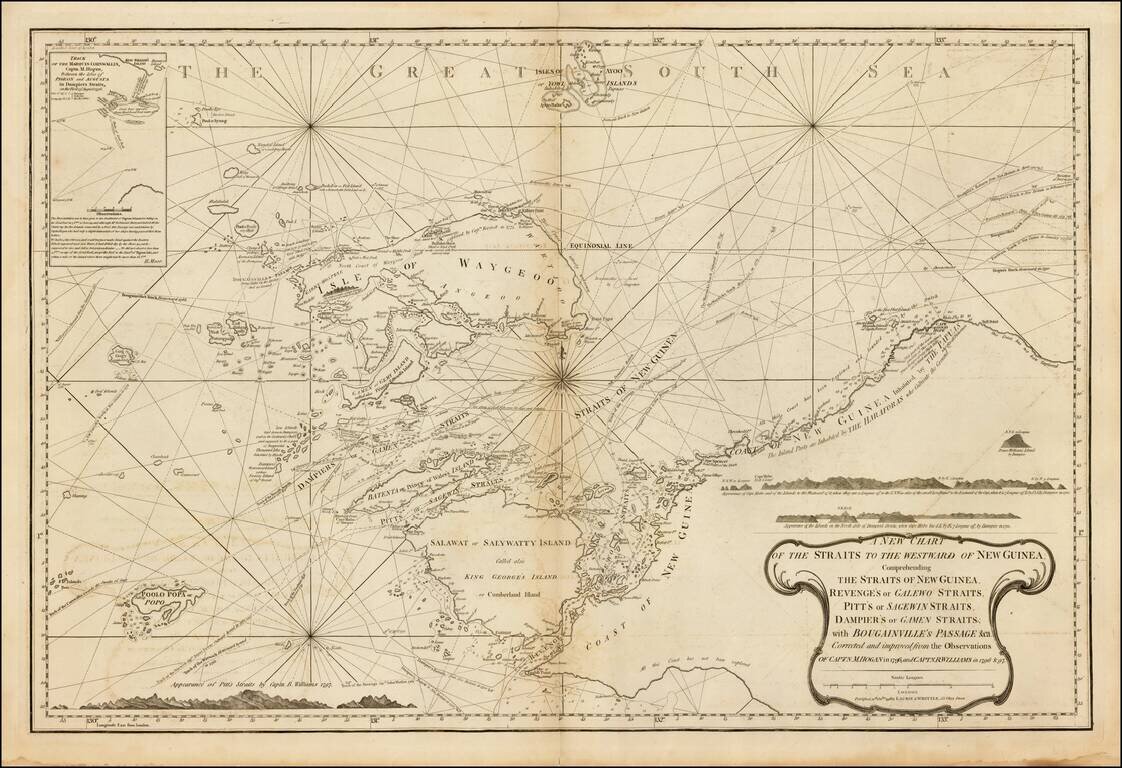 1798 - [Papua New Guinea, etc.] A New Chart of the Straits to the Westward of New Guinea; Comprehending The Straits of New Guinea, Revenge's or Galewo Straits, Pitt's or Sagewin Straits, Dampier's or Gamen Straits, with Bougainville's Passage . . . Captn. M. Hog

Rare sea chart of West Papua, New Guinea, Waigeo, Pulau Raja, Pulau Sanjang, Pulau Aju, etc., published by Laurie & Whittle in London, based upon the surveys under the command of Captain Robert Williams aboard the Thames (1796 - 1797) and Captain... 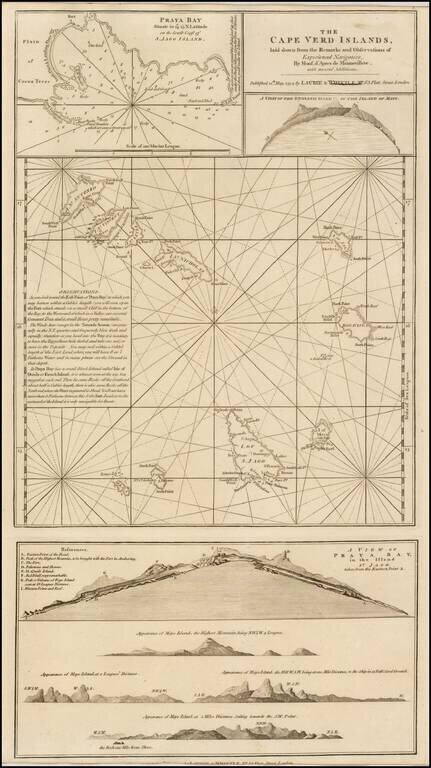 1794 - The Cape Verd Islands, Laid down from the Remarks and Observations of Experienced Navigators, By Monsr. D'Apres de Mannevillette . . . 1794