The Gentleman’s Magazine was a British publication that helped to normalize the use of maps in support of articles and features. It was founded in 1731 by the prominent London publisher Edward Cave, a pioneer in periodical journalism. The magazine continued in print for nearly two centuries, shuttering production in 1922.

This was the publication which first used the word “magazine”, from the French for storehouse. Cave wanted to create a storehouse of knowledge and he employed some of London’s best writers to fill his pages: Samuel Johnson gained his first regular employment by writing for the Gentleman’s Magazine. Other famous contributors included Jonathan Swift.

The publication covered a broad range of topics, from literature to politics, and, from 1739, frequently used maps as illustrations. The first map they printed was a woodcut of Crimea; the second was a fold-out map of Ukraine by Emanuel Bowen. Maps were used to show battle lines, to chronicle voyages, and to educate about areas with which Britain traded. Certain geographers, like Thomas Jefferys, contributed several maps to the publication. 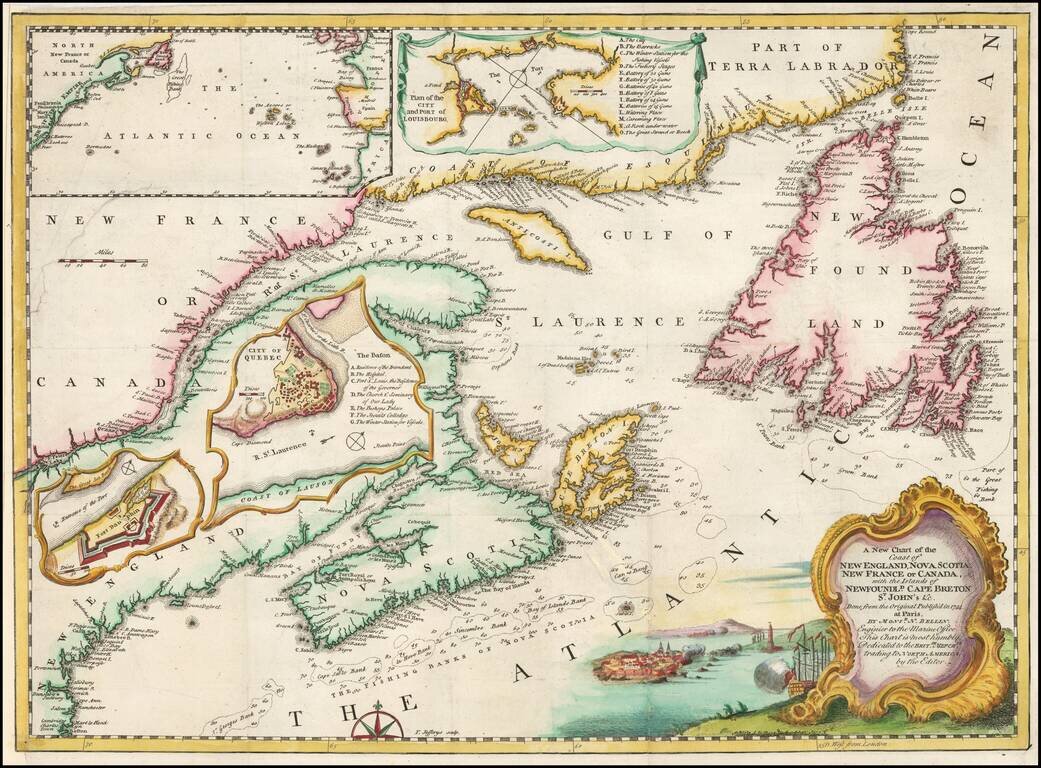 1746 - A New Chart of the Coast of New England, Nova Scotia, New France or Canada with the Islands of Newfoundland. Cape Breton St. John &c. . . .

Interesting regional map from the January 1746 issue of Gentleman's Magazine. Shows in detail the Eastern coast of Canada with depths in soundings. Insets of Quebec City, Fort Dauphine, the Atlantic Ocean, and a Plan of City and Port of Louisbourg... 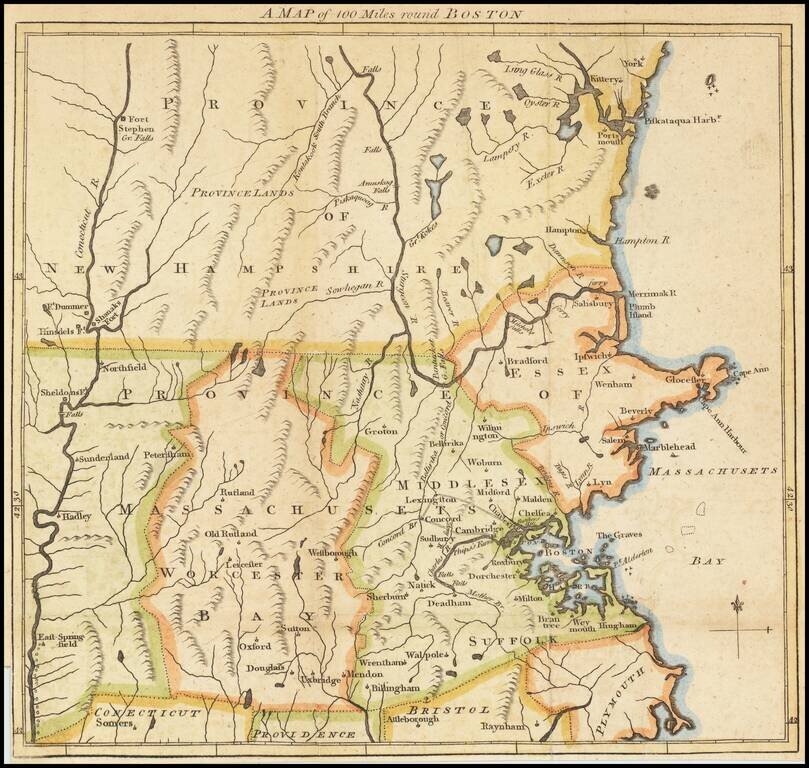 One of the earliest obtainable battle related maps of the American Revolution, which was prepared to illustrate the Gentleman's Magazine accounts of the Battle of Lexington and Concord which appeared in the June 1775 edition. The map illustrates the... 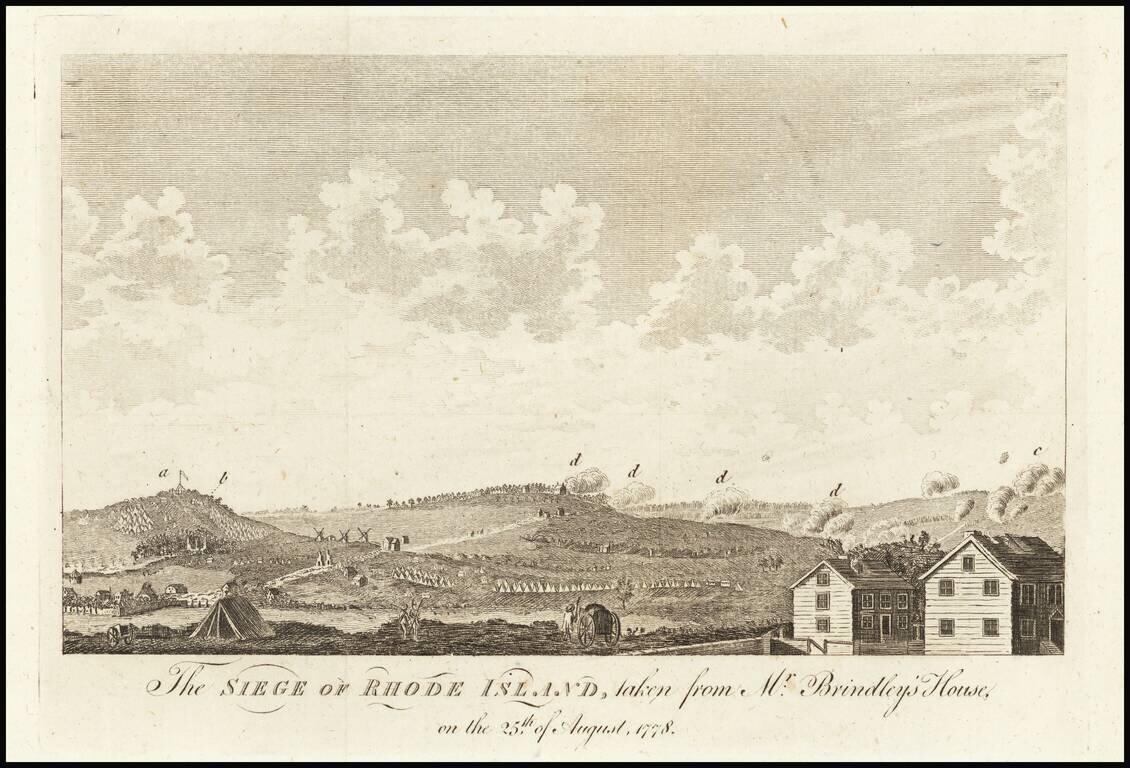 The Battle of Rhode Island was the only battle in New England to occur between the Continental army and the British army. Fought to dislodge the 7,000 British, Hessian, and provincial troops from their entrenched position in Newport during the month... 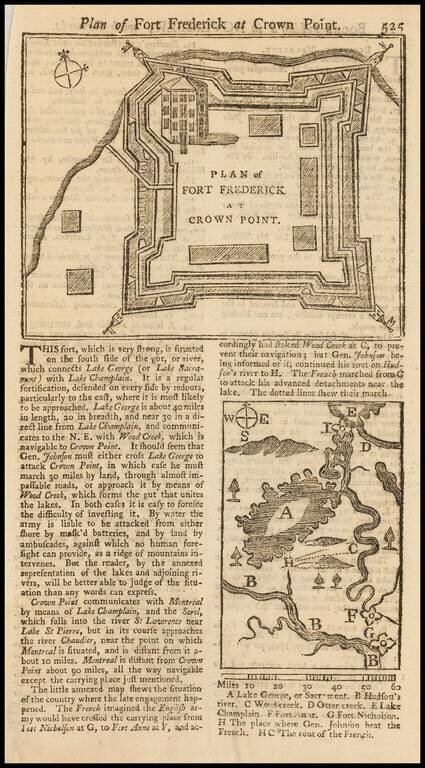 Detailed contemporary plan of Fort Frederick, issued at the outset of the French & Indian War. The map appeared in the November 1755 edition of the Gentleman's Magazine. The text describes the fort and the surrounding area, with a smaller map... 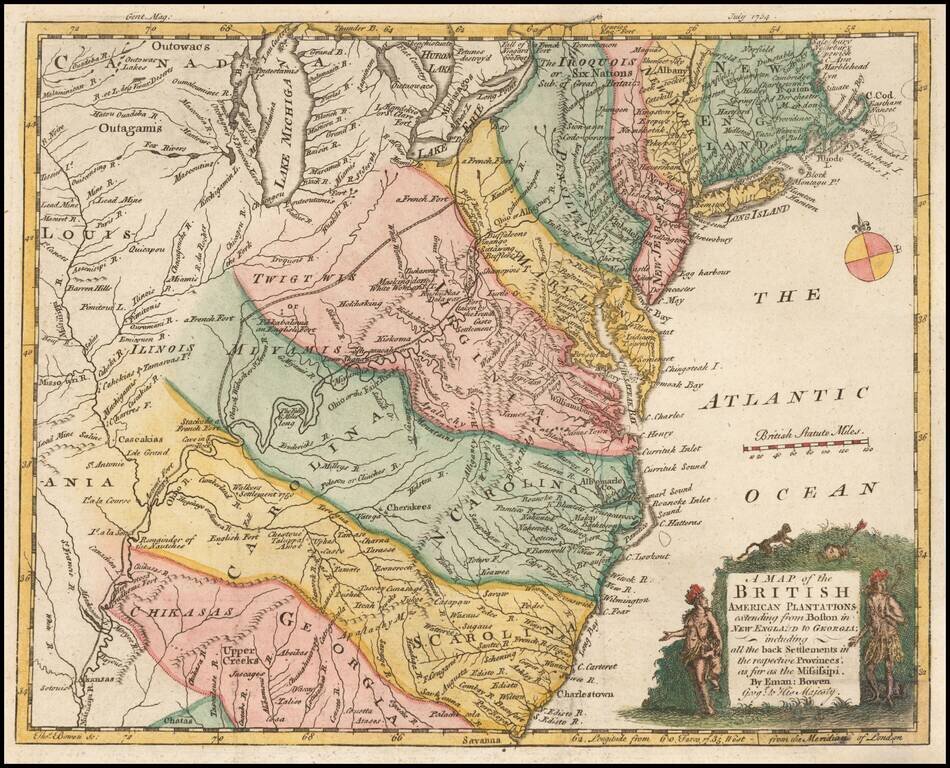 1754 - A Map of the British American Plantations extending from Boston in New England to Georgia; including all the back Settlements in the respective Provinces…

Nice example of this early map of the British Colonies, issued one year prior to the seminal map of John Mitchell. The map is based largely upon the work of D'Anville. The map is quite remarkable for the time period, showing several early Western... 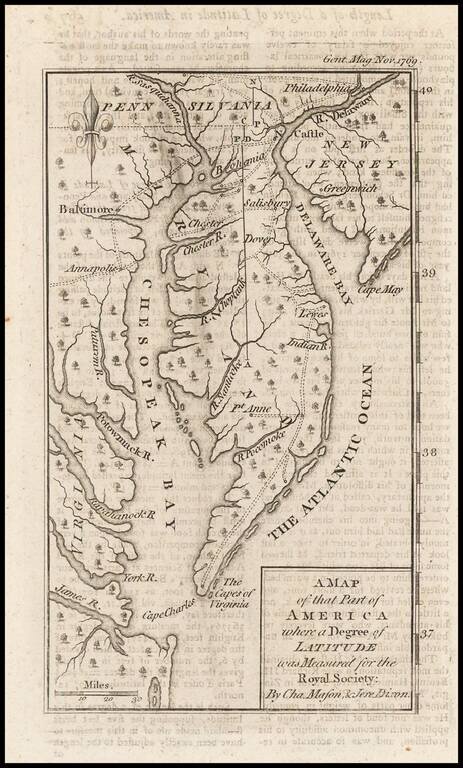 1769 - A Map of that Part of America where a Degree of Latitude was measured for the Royal Society by Cha. Mason & Jere: Dixon

The Survey of the Mason Dixon Line. Detailed regional map of the Chesapeake and contiguous parts of Maryland, Virginia, Delaware, New Jersey and Pennsylvania, showing the results of Mason & Dixon's survey of the boundaries between Pennsylvania... 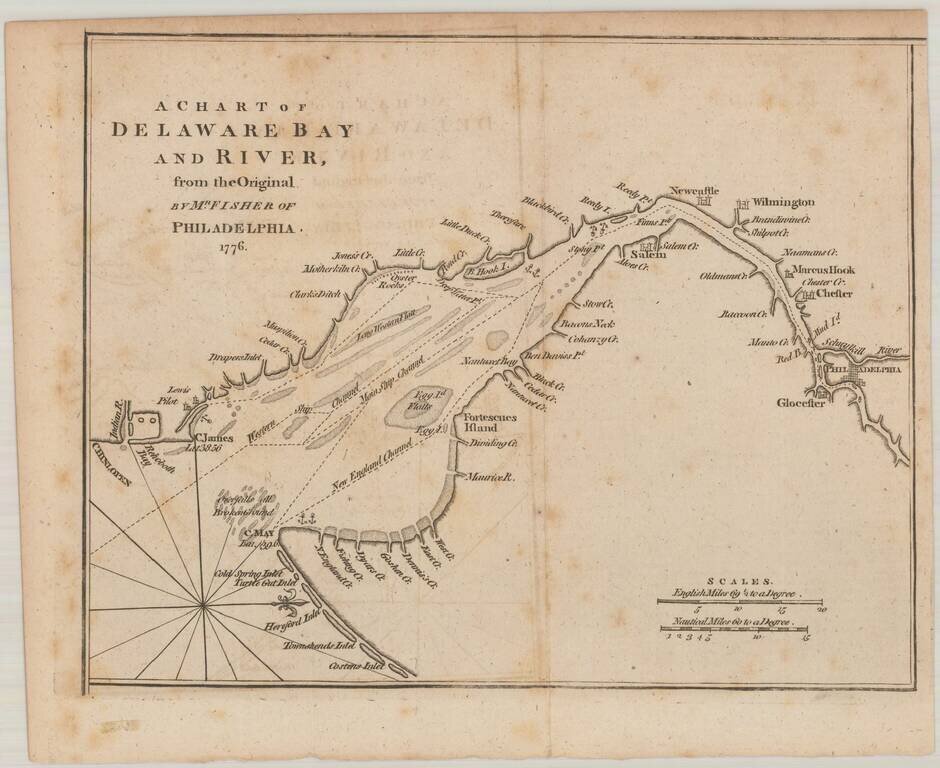 1779 - A Chart of Delaware Bay and River from the Original By Mr. Fisher of Philadelphia 1776. 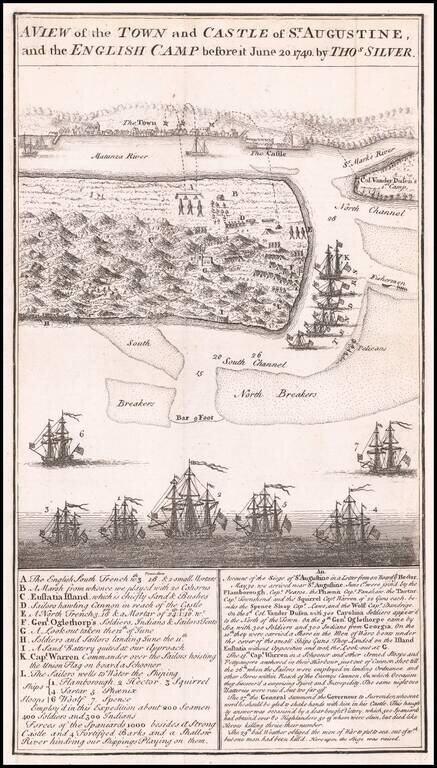 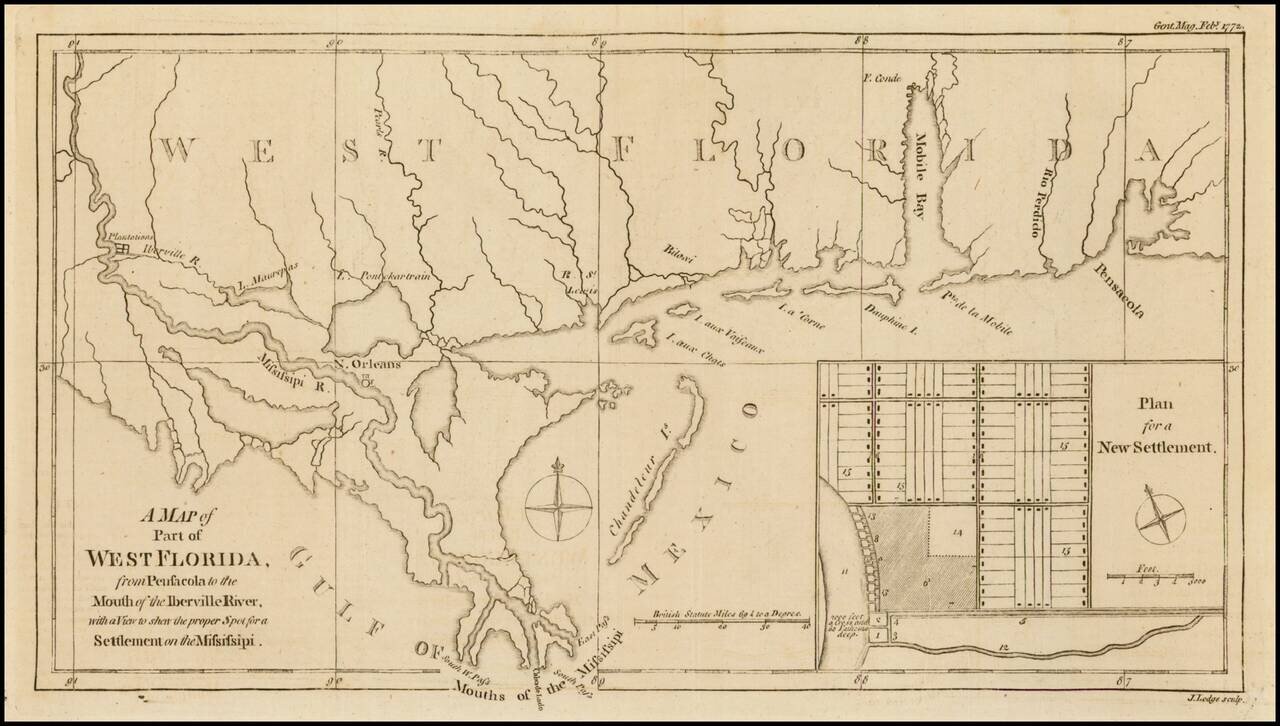 Nice detailed map of the Gulf Coast from Pensacola to the mouth of the Mississippi River, from the February 1772 edition of Gentleman's Magazine, with a nice inset plan for a New Settlement. Extends to west of New Orleans to include Plantations along... 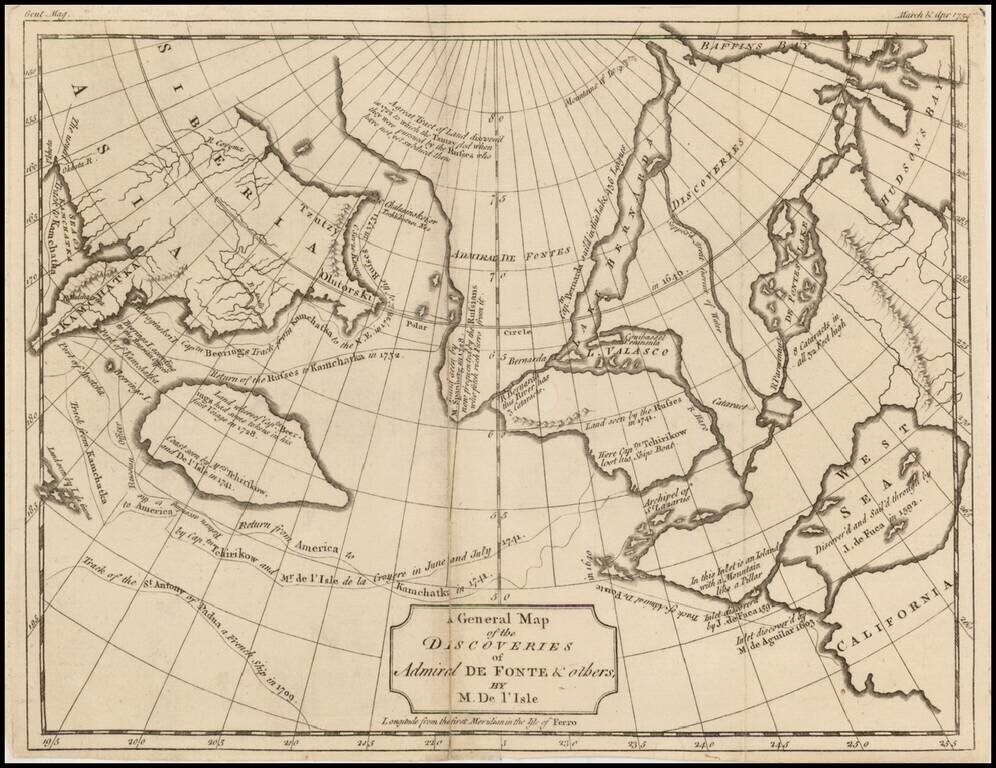 One of the earliest maps illustrating the Sea of the West and the various other cartographical misconceptions associated with De Fonte. Includes tracks and notes from the voyages of Bernarda, Tchirikow, de Aguilar, de Fuca, Behring and various... 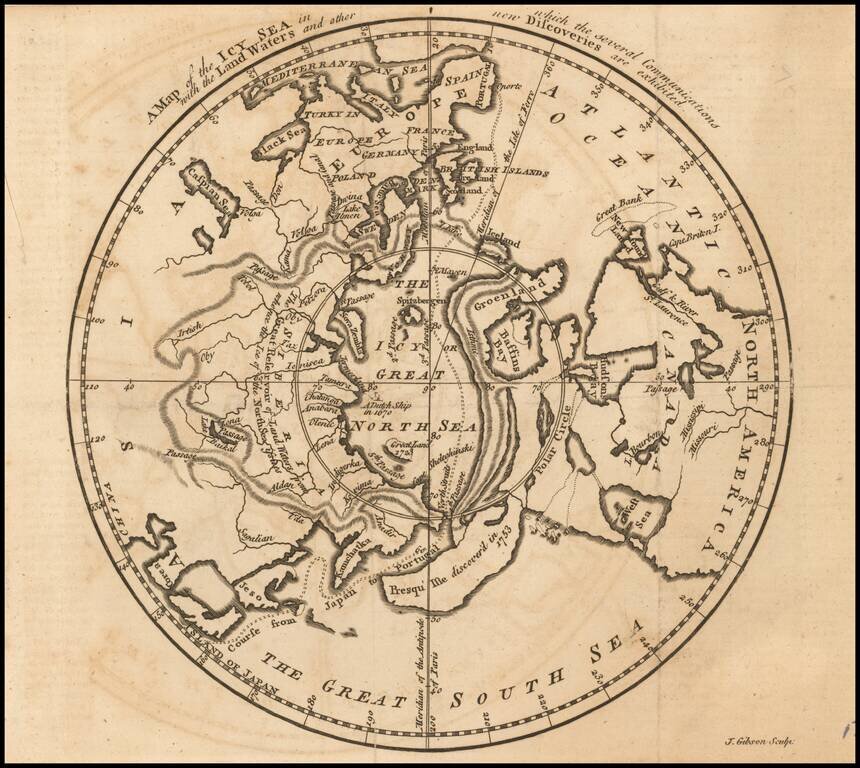 An interesting map on a north hemispheric projection, showing the regions then being actively explored by the Russians, French and English. The projection is based upon Phillipe Buache's work from the prior decade and illustrates one view of the... 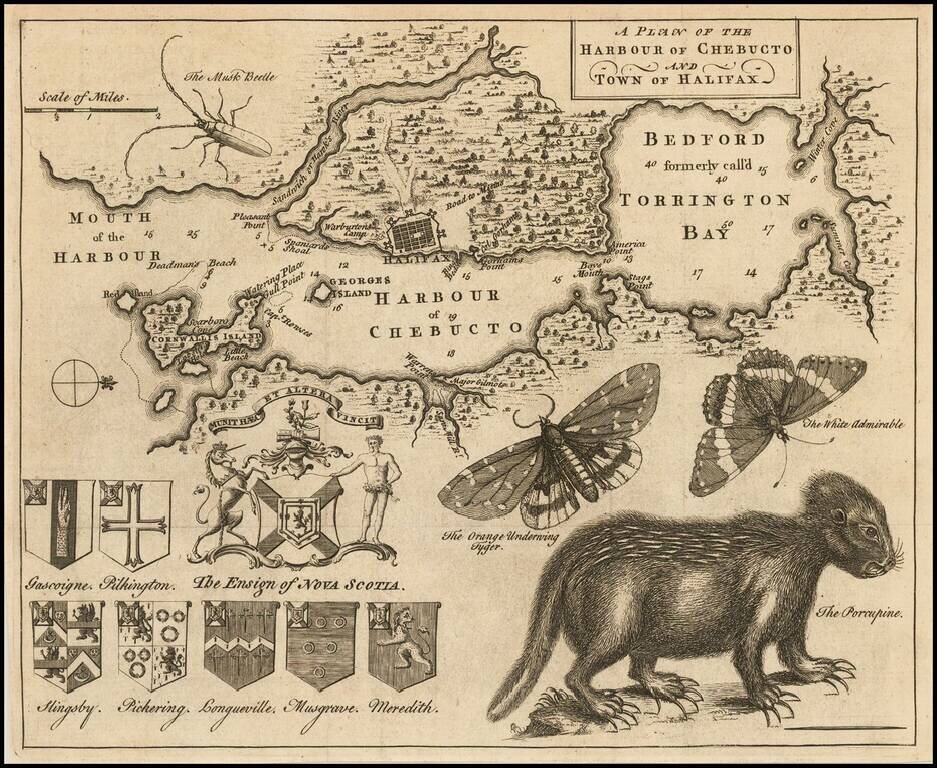 1750 - A Plan of the Harbour of Chebucto and Town of Halifax.

Popular engraved map of Halifax featuring a remarkable depiction of a porcupine in the lower right of the image. This map, which was published in the Gentleman's Magazine in 1750, has long been sought after by collectors for its curious natural... 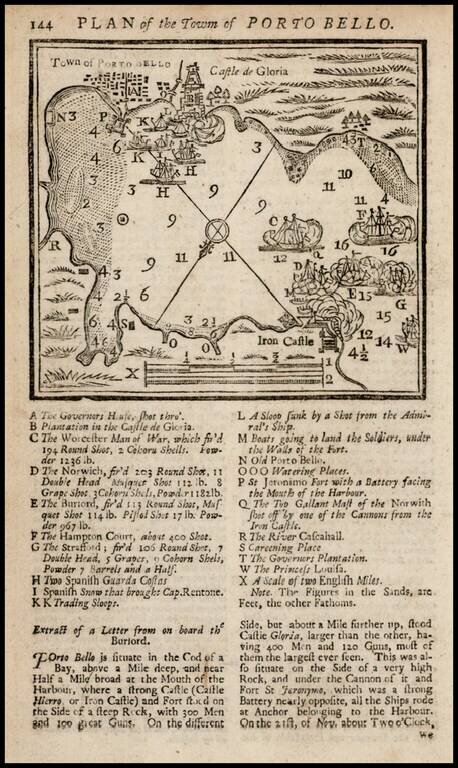 Fine example of the map of Porto Bello with a key showing points of interest. This is a very early map for the Gentleman's Magazine, the first year in which maps illustrated the book. 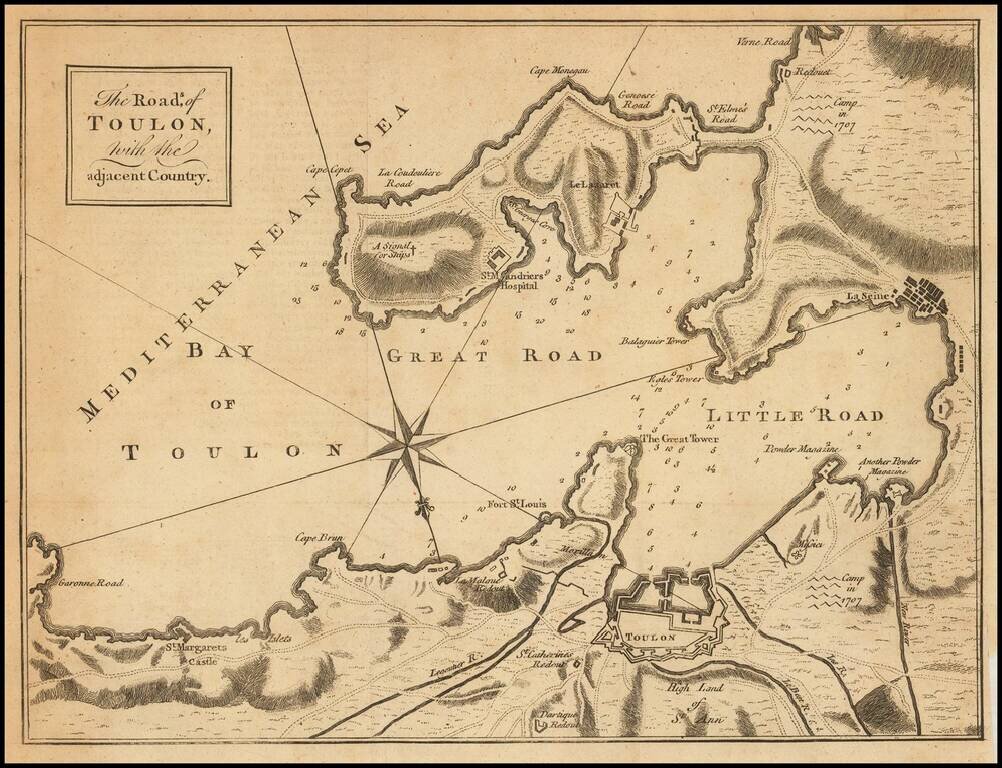 Engraved folding map showing the Bay of Toulon and surrounding defenses, published in the Gentleman's Magazine. The Gentleman's magazine was one of the foremost periodicals of its time, and was routinely consulted by the English public for its coverage...