1728. (4 sheet chart of the Atlantic--Large Inset of Chesapeake & Delaware & NYC Harbor) Chart of the Atlantic Ocean from Buttons Island To Port Royall / . . . Oronoque River To The River May / . . . Coast of Africa from Cape Teffalana to Cape Formosa / . . .

(4 sheet chart of the Atlantic--Large Inset of Chesapeake & Delaware & NYC Harbor) Chart of the Atlantic Ocean from Buttons Island To Port Royall / . . . Oronoque River To The River May / . . . Coast of Africa from Cape Teffalana to Cape Formosa / . . . information: 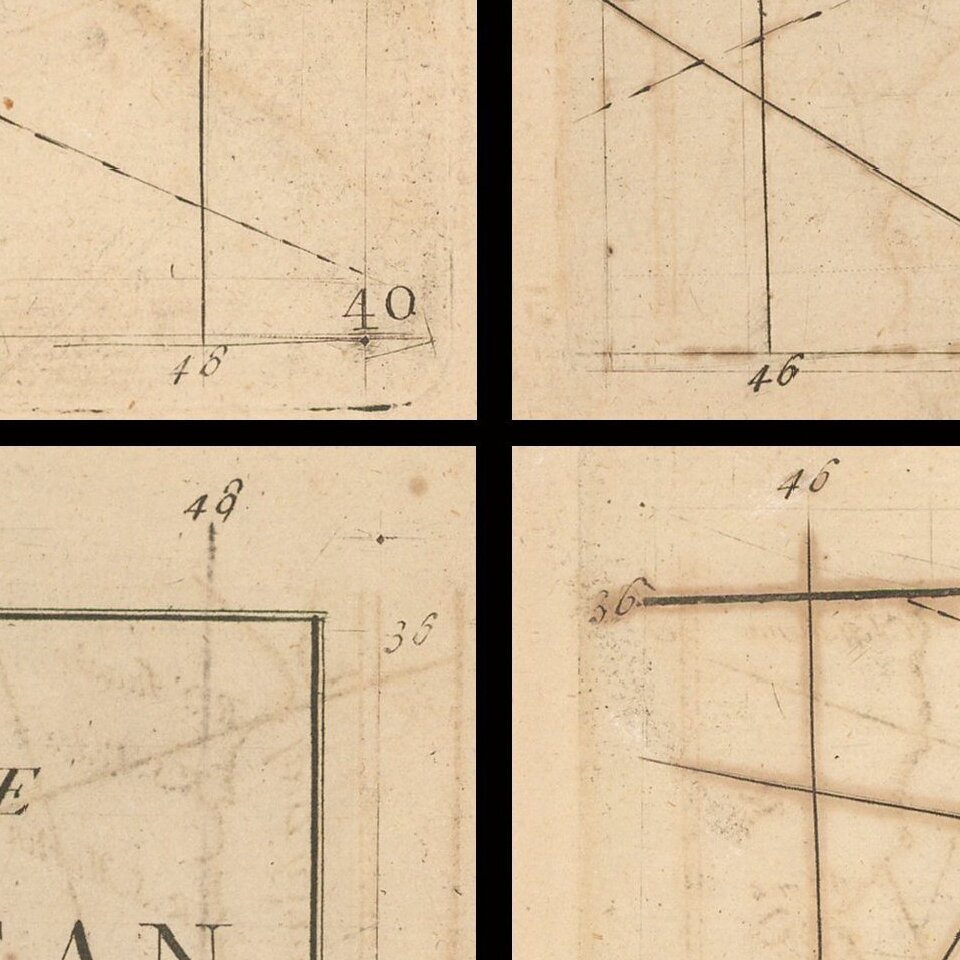 Scarce and detailed early eighteenth-century English set of sea charts of the Atlantic Ocean, with a fine, large inset of the area between the Hudson River and the mouth of the Chesapeake Bay.

The sections which make up the larger chart focus on the eastern coast of North America, the Caribbean Sea, the northeast coast of Africa, and the western coast of Europe. In the top left, the rich Grand Banks fishing area is marked in detail, as is the Eastern seaboard of what was then the British colonies in North America. A note in the far north, where coastal detail is sparser, references the findings of a Captain Davis. John Davis (1550-1605) was a skilled navigator who worked in the service of Queen Elizabeth I and commanded several Arctic voyages in search of the Northwest Passage. The Davis Strait is named for him.

In the bottom left, Florida is shown in a wedge-shape, while the Bahamas’ banks are carefully delineated. Part of Cuba extends from the chart’s border, while farther south parts of Central and South America are shown. These include Darien, which had thirty years earlier been the focus of an attempted colonization effort by the Company of Scotland. The colony failed and thrust Scotland into an economic slump. The area remained of interest, as it was the thinnest band of land separating Atlantic and Pacific.

In the bottom right is the western tip of Africa, along with the Cape Verde and Canary Islands. Both archipelagos were frequent stopping points for European ships traveling to Africa and the Americas, as well as around the Cape of Good Hope to the East Indies. The Senegambia region of Africa, around the mouth of the Senegal River which is shown here, was a significant arena for the export of slaves; roughly a quarter of slaves brought to the British North American colonies and the early United States were from Senegambia.

The sheet in the upper right shows the tip of northwestern Africa, separated from Europe by the Strait of Gibraltar, which when this map was published was guarded by the British garrison at Gibraltar. Most of the Iberian Peninsula is visible, as is France and the Netherlands. All except the very northern part of the British Isles are included.

Each of the chart sheets are thickly webbed with latitude, longitude, and rhumb lines, which mark this as a navigational aid to sailors. There is little ornamentation and no detail inland, again indicating its utility in maritime navigation.

The chart appeared in the Atlas Maritimus et Commercialis, published in London in 1728 as a competitor to Mount & Page's English Pilot. Such famous names as Edmund Halley and Daniel Defoe contributed to the publication, along with John Senex. Although clearly made to be able to fit together as a larger chart of the entire North Atlantic, each sheet also has its own simple title cartouche. The chart sheets would have appeared in the atlas as separate pages.

The large-scale inset of the Chesapeake region is of particular note, being one of the most detailed chartings of the region to date. Over one hundred place names are shown, along with soundings, shoals, and other coastline geography. New Jersey and East New Jersey, written as Jarsey, are named, as are Bergen County, Essex County, Middlesex and others. The inset also includes excellent detail around New York City, Staten Island, and part of Long Island.

Chesapeake Bay was an early focus of colonial energy for Europeans, especially the Spanish, who sent early failed expeditions, and then the English. The first map to name the bay, and the first separate map of Virginia, was drawn by John White and published by Theodor de Bry in 1590. English explorer John Smith first published his iconic map of the bay and Virginia in 1612; it was reproduced in several states until the eighteenth century. Dutch charts, the best in the world in the seventeenth century, also featured detailed information about the bay, such as Johannes van Keulen’s reprint of Claes Janszoon Vooght’s Pas kaart van de zee kusten van Vrginia in 1684.

Many of the maps of the seventeenth century followed Smith’s example in orienting maps of the area to the west, including, for example, Augustine Herrman’s Virginia and Maryland as it is planted and inhabited this present year 1670. Hermann’s map in turn inspired John Senex in his own maps of the area, although his were oriented to the north; Senex also worked on the atlas in which this map featured.

These chart sheets were included in an important English maritime atlas of the early-eighteenth century, the Atlas Maritimus et Commercialis. The atlas included a geography text, sailing directions, and sea charts. It was published by, among others, the Knapton brothers, who were also responsible for some of the bestselling voyage accounts of the early- to mid-eighteenth century, including those of William Dampier.

This chart is an increasingly rare map worked on by an assortment of some of the most talented men of their age. It is seldom seen on the market, and is often featured in a much poorer condition than this example.