1775. A Chart of North and South America, including the Atlantic and Pacific Oceans, with the nearest Coasts of Europe, Africa and Asia.

A Chart of North and South America, including the Atlantic and Pacific Oceans, with the nearest Coasts of Europe, Africa and Asia. information: 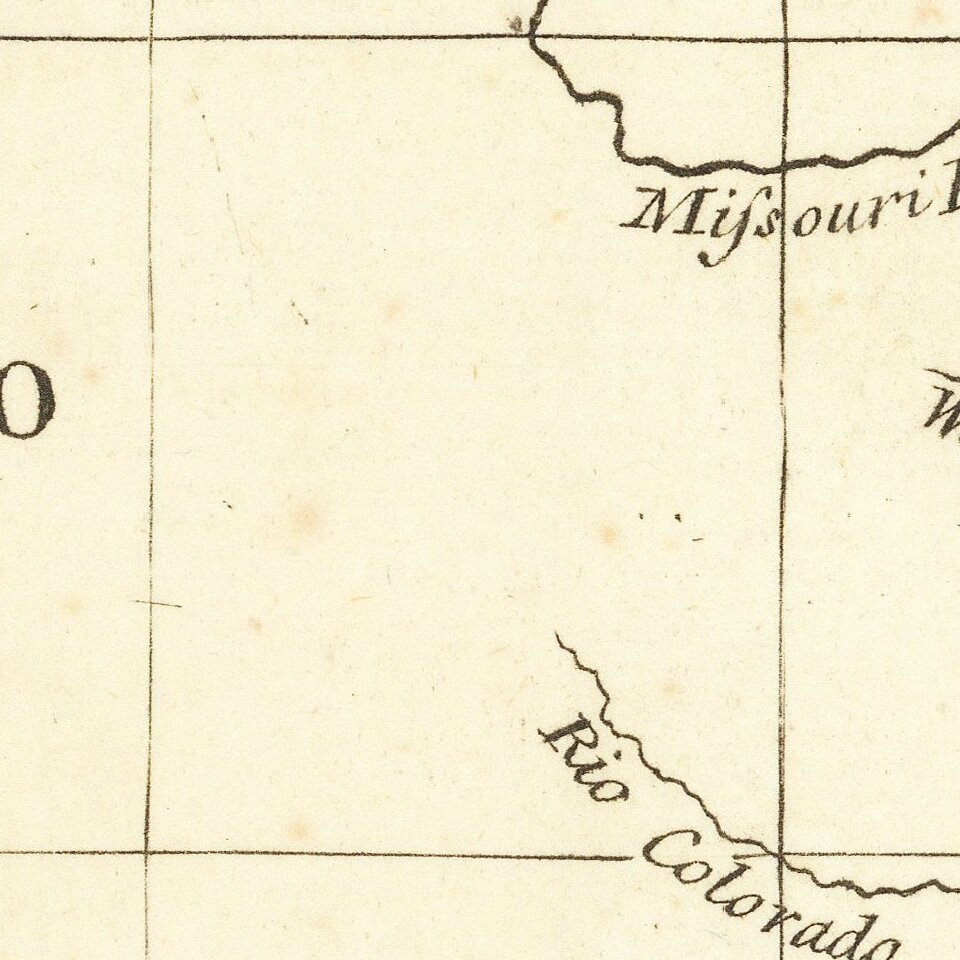 This is a nice example of the 1775 edition of this important six sheet chart of North and South America, originally compiled by John Green (a.k.a. Bradock Mead), a Dubliner, whose scandal-fueled lifestyle stood in marked contrast to his meticulous scientific approach to cartography.

Dozens of explorers' routes are plotted, with illustrations of at least 75 associated sailing vessels. The reason for including so many is explained in a note in the Pacific, "These Tracks of Shipping are inserted to make known the Navigation of this Ocean and encourage the discovery of a Passage on this side Northwest." There are many other notes and commentaries surrounding Hudson and Baffin Bays, revealing Green's meticulous research and the careful additions of later editors.

In particular, the 1775 edition adds significant revisions in the area of Alaska. Alaska is represented by a large island labeled Alaschka. The voyages in Alaskan waters include those of "Three Russian Ships" (1648), Bering (1741), Chirikov with De L'Isle (1741), and Sindo (1764-1768). There is also considerable change in the Pacific, where the discoveries of Wallis, Bougainville, and Cook have added Tahiti and New Zealand in more detail. The same is true of the Falkland Islands in the South Atlantic. Interestingly, the Solomon Islands, which on the original map were labeled as "Inhabited" are labeled here as "Imaginary Isles." Pepys Island, off the coast of Argentina, is also now labeled as imaginary.

Of particular interest are the comparative tables of charts that show the variations in latitude and longitude between this chart and those of Bellin, D'Anville, and others. Green was particularly aware of the competitive nature of the international map market and used his research to set himself apart. He also used the most recent information. For example, a table in what is now British Columbia gives the latitudes and longitudes of sixteenth century Spanish journals so that the reader could compare them to the coast as plotted, coordinates for which were taken from a Spanish chart stolen by Anson when he took the Covadonga treasure galleon in 1743.

Map as protest: the Buache/Delisle map

The original map was partly designed to expose the errors in De L'Isle and Buache's map of the Pacific Northwest published in June 1752. This map, a collaboration between the famed Guillaume De L'Isle's brother and son-in-law, was one of the first to illustrate the extent of the Russian discoveries in the 1730s and 1740s, as well as published a Sea of the West which Guillaume had hypothesized but never printed. They also put place to three apocryphal, or least exaggerated, voyages, led by Martin Aguilar, Juan de la Fuca, and Admiral de la Fonte.

It was the placement of the latter's discoveries that particularly incensed Green. Admiral de Fonte supposedly sailed to the Pacific Northwest in the mid-seventeenth century. The first mention of Fonte appears in two letters published in London in 1708 in two issues of The Monthly Miscellany or Memoirs for the Curious. The Fonte letters had been reprinted by Irish MP and Northwest Passage enthusiast Arthur Dobbs in his An Account of the Countries adjoining Hudson's Bay (1744) and were mentioned in other travel accounts . De L'Isle's copy of the letters came from Lord Forbes, British ambassador to Russia, as De L'Isle explained in a memoir, Nouvelles Cartes des Decouvertes de l'Amiral de Fonte (Paris, 1753). He also read of them in Henry Ellis' account of the 1746-7 expedition to Wager Inlet in Hudson Bay.

The letters recounted that Fonte had found an inlet near 53°N which led to a series of lakes. While sailing north east, Fonte eventually met with a Boston merchant ship, commanded by a Captain Shapley, which had sailed north and east round the continent. One of Fonte's captains, separated from the Admiral, reported he had found no strait between the Pacific and the Davis Straits, yet had reached 79°N, helped by local indigenous peoples. This story, with its suggestion of water passages connecting the Pacific Northwest with the Atlantic, inspired hope in some and doubt in others in the mid-eighteenth century.

A few, like Green, thought the entire story a farce. In a memoir published along with the 1753 original of this map, Green explained that in the June 1752 edition of the De L'Isle Buache map, Fonte's entrance was at 63°N latitude, not 53°N as the letters said. Green thought this was duplicitous and concluded "that Messieurs De L'Isle and Buache…were conscious the Discoveries ascribed to De Fonte were spurious, at the same Time they adopted them" (iii). Green reveals in a postscript to the memoir that while his work was at press, De L'Isle issued a new map of the same area, with the Fonte latitude corrected. Both Buache and De L'Isle, no longer working together, continued to believe in Fonte as a source, however, much to Green's derision. On his own map, he left the interior of what is now northwestern Canada blank, except for a comment:

These parts, as yet wholly unknown are filled up, by Messrs. Buache and Del'Isle, with the pretended Discoveries of Adm. De Fonte and his Captains in 1640.

As can be gleaned from his comments, Green was one of the most intriguing figures in British cartographic history. He was an extremely gifted, but troubled mapmaker who compiled many of the maps for prolific English cartographic publisher Thomas Jefferys (ca. 1719-1771). Jeffreys was the Geographer to Frederick Price of Wales and later to King George III. His workshop passed to his partner, William Faden, after he died in 1771. However, Jeffreys had gone bankrupt in 1765 and some of his plates were bought by Robert Sayer (1725-1794). Sayer, who had partnered in the past with Philip Overton (d. 1751), specialized in (re)publishing maps. In 1770 he partnered with John Bennett. It was this partnership that oversaw the editing and reprinting of this map.

Despite his sensational life, Green was a skilled mapmaker. This map is a testament to that fact, and a brilliantly detailed example of the Americas, particularly in the Pacific Northwest and Pacific regions.