1780. A Chart of the Bay and Harbour of Pensacola in the Province of West Florida Surveyed by George Gauld A.M. Published By Command of Government By J.F.W. Des Barres Esqr.

A Chart of the Bay and Harbour of Pensacola in the Province of West Florida Surveyed by George Gauld A.M. Published By Command of Government By J.F.W. Des Barres Esqr. information: 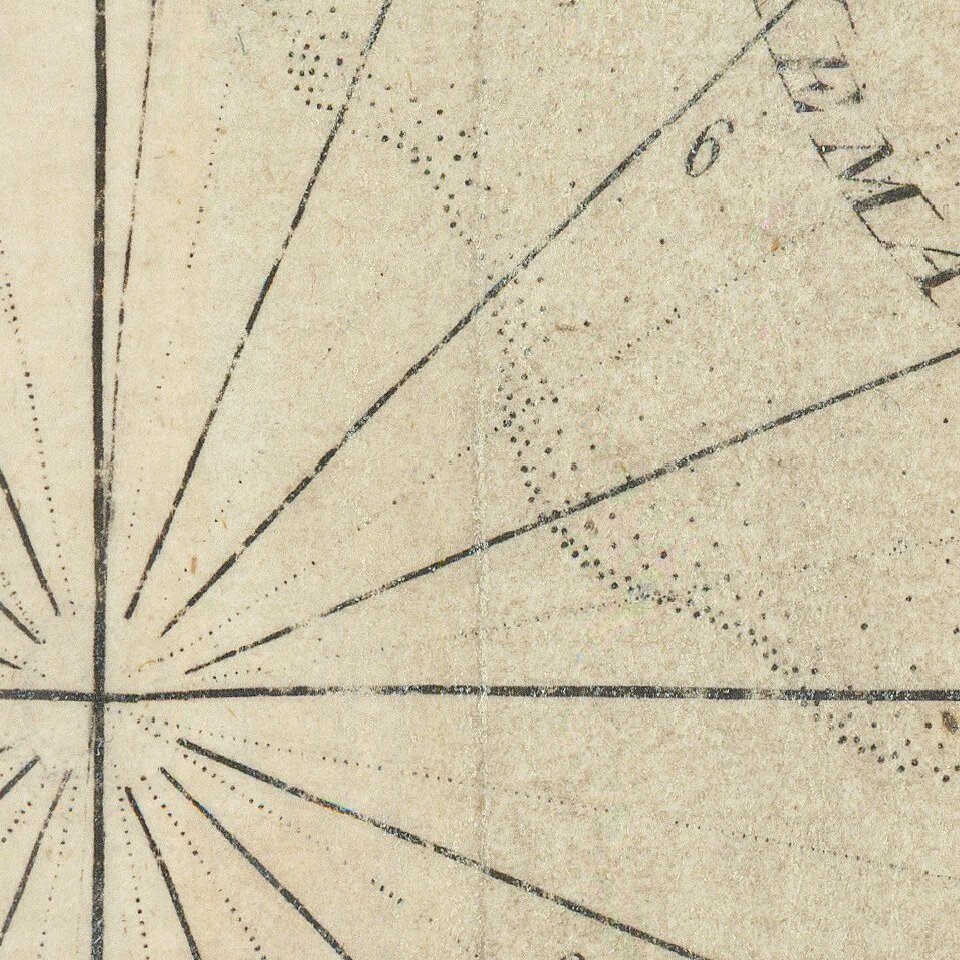 The Only George Gauld Chart Published During His Lifetime.

Superb engraved chart of Pensacola Harbor in Florida, published during the American Revolution by J.F.W. Des Barres, from original surveys by George Gauld.

The map extends from the eastern end of Big Lagoon in the west to the Navarre Beach Causeway in the west. In the north, it goes roughly as far as Pace and Bagdad. Historical Pensacola is shown as a grid of streets surrounding a small fort. A "Signal House" is shown in the vicinity of present-day Historic Fort Pickens.

The chart abounds with information that would be of use to sailors, including a watering-place, soundings, topographic details, and the following note:

The short in general is low and sandy; the water seems to have gained upon it in Several Places, especially on the West Side which is exposed to the North Easterly-winds, as there are large roots of trees in the ground upward of 100 feet within Water Mark.

The Bottom in the Harbor and a great part of the Anchoring-ground without the Barr, along the Coast, is covered with deep thick mud the Barr itself is hard sand.

The Tides are very irregular & much affected by the winds, and run with great velocity though the mouth of the Harbor, here they rise 3 feet; within the Harbor, 2 feet, and hardly 1 foot on the Barr.

This Harbor and all the Coast abound with worms.

Pensacola is an impressive natural harbor, one of the best on the Gulf Coast, and so its inclusion in Des Barres chart atlas, The Atlantic Neptune, is no surprise.

Interestingly, the Spanish would take control of Pensacola in 1781, one year after this chart was produced, and they would hold it, along with the rest of West Florida, until the Adams-Onis Treaty in 1819.

Following the French & Indian War, George Gauld, a Scottish surveyor, was assigned the task of charting the waters off the Gulf Coast of West Florida. Between 1764 and 1781 Gauld mapped an area that extended from New Orleans to the western coast of modern-day Florida. Recognizing the importance of his work to all those who traveled in the area, Gauld readily shared his work with scientific societies in America, including the American Philosophical Society in Philadelphia.

During the Revolutionary War, Gauld was forced to suspend his work in the Dry Tortugas and the Florida Keys due to attacks by American privateers, and in 1781, he was taken prisoner at the Siege of Pensacola. Gauld was subsequently taken to Havana and then New York, before being repatriated to England, where he died shortly afterward.

Most of Gauld's charts were published posthumously by Faden and later by the Admiralty in very limited numbers. This arrangement was reached by his widow Ann Gauld, and William Faden around 1790.

That makes the present chart one of the few George Gauld maps to have been published in his lifetime.

Ware and Rea's George Gauld: Surveyor and Cartographer of the Gulf Coast:

The following is an excerpt from John D. Ware and Robert R. Rea's book on Gauld describing his relationship with the chart:

...It is clear that his examination and charting of Pensacola Bay and environs was completed before May 4, 1766, the date Governor Johnstone sent the "Plan of the Bay" to the Board of Trade.

Taken together, these manuscript drawings formed the basis for the only known work by George Gauld published during his lifetime, A Chart of the Bay and Harbour of Pensacola, in J.F.W. Des Barres's Atlantic Neptune in 1780. Gauld's Chart demonstrates that he surveyed the lagoons of the north and west shores of lower Pensacola Bay with great care. On the Chart, Gauld's earlier designation of "Large Lagoon" became "Grand Lagoon"; his "Lagoon" was christened "Cox's Lagoon"; the unnamed inlet, of which only the mouth was shown earlier, appeared as "West Lagoon"; and his "Salt River" was changed to "East Lagoon". The tributary streams were drawn and shaded in such a manner as to indicate the topography of the land. North and west of Pensacola six lakes were described, further indicating the extent to which Gauld surveyed the surrounding countryside. Modern Escambia, Blackwater, and East bays were examined and charted to their headwaters. The Escambia River was called "Scambia," but the bay itself remained unnamed. From English Point northward, "Hull" and "Stony Points," now known as Devil and Lora points, were identified, and a "Brickkiln" was located just south of the latter promontory. The only other village on the bay, Campbell Town, was identified and located about one mile south of the mouth of the Escambia River. Present Mulatto and Indian bayous were sketched but left unnamed, while the southern extremity of the peninsula, now terminating in Hernandez, Garcon, and White points, was labeled "Yemassee Point". Blackwater Bay retained his Indian and English names of "Oyuva Lana or Yellow River." Unaccountably, Gault's former "East Point" was changed to "Fan Point" in the published version of his work.

The "Remarks" on Gauld's earlier "Plan" were slightly abbreviated, and the Chart was drafted to a smaller scale by Des Barres; coordinates of latitude and longitude were provided in the margins, though both were somewhat in error. Two compass roses were printed, and the magnetic variation was again given as 4°30' E. Some eighty tracts of land of various sizes and shapes were depicted on Des Barres's version, exclusive of the lots comprising the villages of Pensacola and Campbell Town. Finally, it should be noted that comparisons of Gauld's earlier manuscript drawings and published charts with their modern counterparts disclose amazing similarities as to distances and configurations, a striking demonstration of Gauld's skill as a marine surveyor--and the remarkably few significant changes wrought by man or nature in the intervening period of more than two centuries.

The farther south and west one travels in the charts of The Atlantic Neptune, the rarer they tend to become. This chart is no different; the Royal Museum Greenwich, which houses the Henry Stevens collection of Des Barres charts has only one example of the present map (for some other charts, they have more than 10 examples). Furthermore, there appears to be only one state of the map, whereas with other Des Barres charts there can be as many as 8 states.

Both of these facts point to the rarity of the present charts compared with the already-rare Des Barres charts generally.

Joseph Frederick Wallet Des Barres (1721-1824) was born in either Paris or Basel, Switzerland, to a Hugueont family. He studied under the great mathematician Daniel Bernoulli at the University of Basel before immigrating to Britain, where he trained at the Royal Military College, Woolwich.

Upon the outbreak of hostilities with France in 1756, he joined the British Royal American Regiment as a military engineer. He came to the attention of General James Wolfe, who was impressed with his charting ability. During this period, he also worked with the legendary future explorer, James Cook, on a monumental chart of the St. Lawrence River.

Des Barres is best known for the Atlantic Neptune, was a remarkable, multi-volume set of sea charts and coastal views prepared from recent surveys, some of which were overseen by Des Barres in Nova Scotia after the Seven Years’ War. The maps, charts, and views were prepared under the supervision of Des Barres and employed as many as twenty engravers and assistants. They were produced over the course of a decade, from 1774 to 1784, in time to be used by the Royal Navy in the American Revolution.

After the Revolution, Loyalists were resettled throughout Canada. As part of this process, a new colony was created by separating Cape Breton from Nova Scotia. Des Barres, who already owned extensive lands in the Maritimes, served as lieutenant governor of Cape Breton Island from 1784 to 1787. He later served as governor of Prince Edward Island from 1804-1812.

Des Barres lived an exceptionally long life, even by today's standards, finally dying at age 102. Des Barres' funeral was held at St. George's Round Church in 1824 and he is buried in Halifax.