1755. A general Map of the Middle British Colonies in America, viz. Virginia, Maryland, Delaware, Pennsylvania, New-Jersey, New-York, Connecticut and Rhode-Island: of Aquanishuonigy the Country of the Confederated Indians. . . And of Part of New-France. . . By

A general Map of the Middle British Colonies in America, viz. Virginia, Maryland, Delaware, Pennsylvania, New-Jersey, New-York, Connecticut and Rhode-Island: of Aquanishuonigy the Country of the Confederated Indians. . . And of Part of New-France. . . By information: 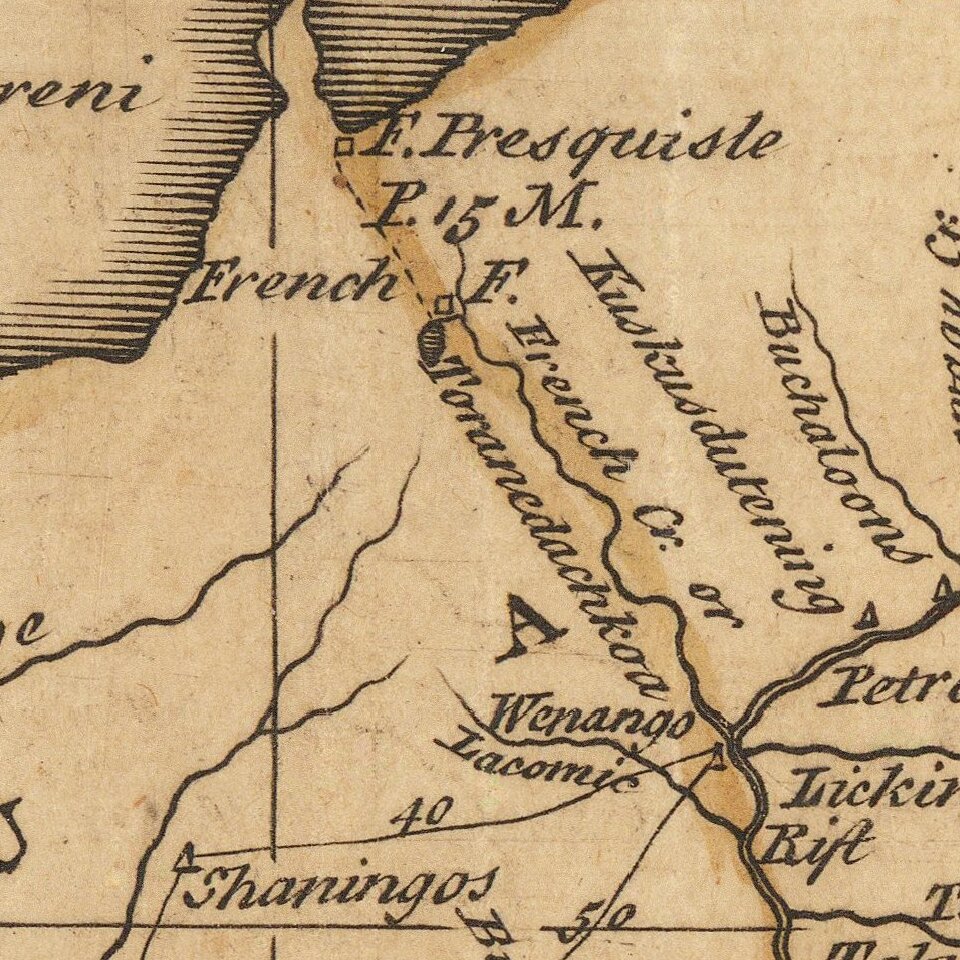 A nice example of the Sayer-Jefferys London issue of Lewis Evans' seminal map of the British Colonies in North America.

Along with the maps of Henry Popple and John Mitchell, Lewis Evans' map is considered among the most important and influential American maps of the 18th Century, and is the only one of the three to have been published by an American. Both Evans and Mitchell's maps were intended to spur western expansion into the Trans-Allegheny, Ohio Valley and regions westward, and in response to French encroachments.

Evans' map provided the best early depiction of the Ohio country, while documenting competing British, French and native American claims in a region destined to be the flashpoint of the French and Indian War. In this regard it is of particular note for treating the Iroquois Confederacy as a geopolitical power in its own right, with its own internal political structure, territory (here known as "Aquanishuonigy") and diplomatic interests.

The map is filled with details meriting closer study. It locates hundreds of European and native American settlements, depicts the network of roads and trails, and provides an immense amount of information about the navigability of rivers and important portages. The many other notations include for example, Dartmouth College, the location of "elephant bones," "Antique Sculptures," salt and limestone deposits, and petroleum in western Pennsylvania and coal in Ohio.

Evans' map became the standard for nearly 50 years, being re-issued by Jefferys, Bowles, Kitchen and others. The map is a milestone both for its political significance and extension of cartographic knowledge in the region. Governor Pownall re-issued an updated edition of the map taken from the original Evans plate, with an addition of New England and a group of tables, naming townships in the Colonies. Pownall had been a great supporter of Evans and pledged the proceeds from the map to Evans' daughter. The cartographic importance of the map and its place in the history of cartography are substantial.

Pritchard and Taliaferro describe Evans as "the best geographer working in the English colonies in the mid-eighteenth century. A dedicated scientist, he exchanged scholarly information with Peter Collinson, Benjamin Franklin, colonial administrator Thomas Pownall, New York mathematician and mapmaker Cadwallader Colden, and others." ( Degrees of Latitude, p. 172) His natural talent, his own extensive surveys in western New York and Pennsylvania, and his large network of fellow scholars and mapmakers enabled him to produce what for its time was an extraordinarily accurate and detailed map. Many compared it favorably to the monumental Map of the British and French Dominions in North America, recently completed by Virginia physician John Mitchell. Benjamin Franklin, for example, wrote that "When [Evans' map] is done, Dr. Mitchel's Map may perhaps be something improv'd from it." ( Degrees of Latitude, p. 174)

The first edition of Evans' map was engraved by James Turner and published in Philadelphia in 1755. It was accompanied by Evans' Analysis of a General Map of the Middle British Colonies, an essay describing the map's sources and explaining its geopolitical significance. The map's importance, and the rarity of the Philadelphia edition, soon led to its being copied and reissued in London many times by the end of the 18th century.

Offered here is the rare John Gibson issue of the map, published by Thomas Jefferys in 1758. The geography on this new edition is more or less faithful to Evans' map, but Gibson introduced numerous long text notes borrowed from Evans' Essays, which combine to give the map a rhetorical impact not present in Evans' prototype. The most pointed of these emphasize the immense potential of the western country and the strategic threat posed by the French. One such note provides

that if the French settle on the Back of our Colonies, the English must either become subject to them in a little Time, or else have their Throats cut & lose all their Slaves; to avoid the latter, 'tis natural to suppose they will be necessitated to submit to the former.

The full title of the map is:

A general Map of the Middle British Colonies in America: Viz. Virginia, Maryland, Delaware, Pensilvania, New-Jersey, New-York, Connecticut and Rhode-Island: Of Aquanishuonigy the Country of the Confederate Indians Comprehending Aquanishuonigy proper, their Places of Residence, Ohio and Thuchsochruntie their Deer Hunting Countries, Couchsachrage and Skaniadarade their Beaver Hunting Countries, of the Lakes Erie, Ontario and Champlain, And of Part of New-France: Wherein is also shewn the antient and present Seats of the Indian Nations; carefully copied from the Original Publish'd at Philadelphia By Mr. Lewis Evans 1755 with some Improvements by I. Gibson.

The map is rare on the market. This is the second example we have offered in the past 20+ years.