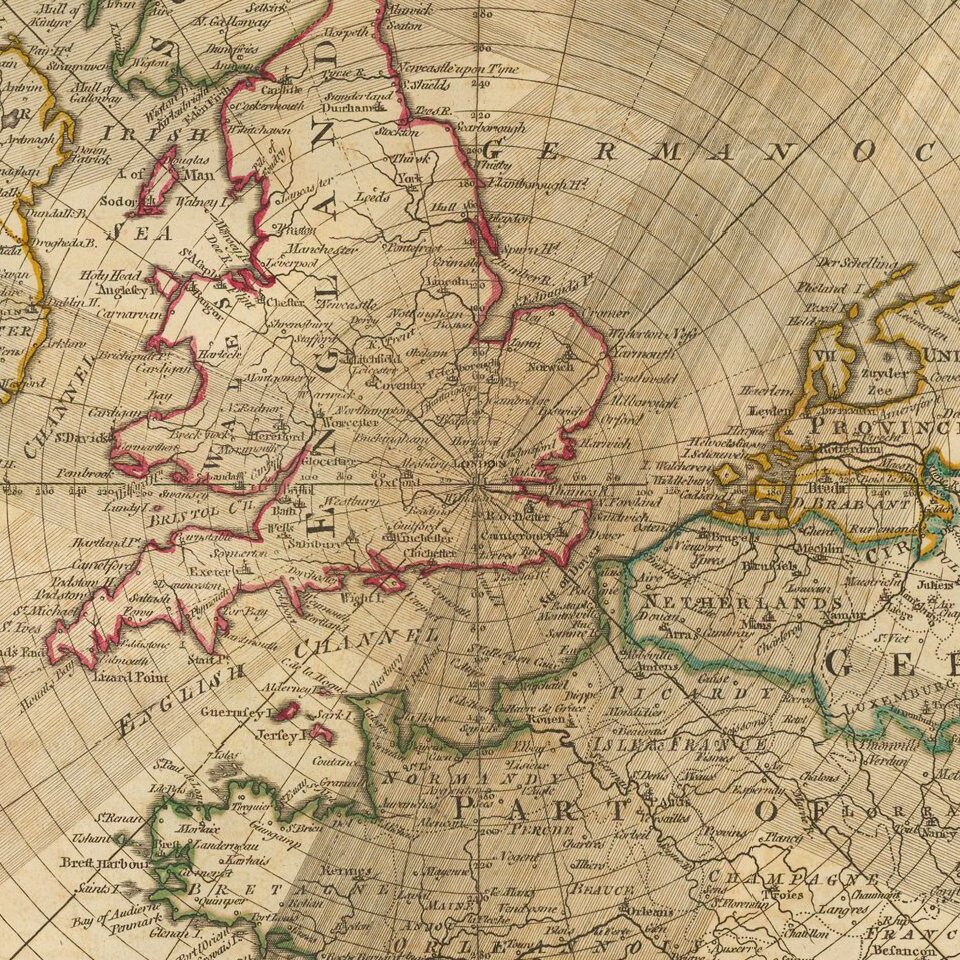 This map, centered on London, shows the paths of total (1715, 1724) and partial (1737, 1748, 1764) solar eclipses that were visible from Europe. The extent of the map includes Ireland, England, Scotland, and parts of continental Europe including Germany and France. Each eclipse is labeled with its date and depicted as a shadowed path. The shadowed path design is visually impactful and a clear way to communicate how the moon passes in front of the sun.

The eighteenth century was the Golden Age of eclipse mapping, pioneered by Edmond Halley. Halley is renowned for predicting the path of the 1715 eclipse within twenty miles of accuracy and within four minutes of the time of totality. Halley was at the forefront of what would become widespread public fascination with eclipses and other astronomical events.

Astronomy as an accessible public science, something any person could observe by standing in the right place, continued to gain popularity. At the time, astronomical events were often conflated with astrological beliefs; eclipses were seen as equally exciting and ominous. Given the widespread public interest, major eclipses near a commercial hub such as London provided numerous business opportunities leading up to events.

The map was created in an azimuthal equidistant projection centered on London. Azimuthal maps show the world in 360 degrees radiating from a central point; they are particularly useful for mapping astronomical occurrences and polar regions. Gerard Mercator used this projection for his polar region inset maps on his famed 1569 world map, and it has been in wide use since the Renaissance for star charts and planispheres.

As a side note, dates on this map prior to 1750, when Great Britain changed to the Gregorian calendar, are recorded in the Julian calendar. Therefore, while Halley’s Eclipse is labeled April 22nd, 1715, modern viewers will be more familiar with the date of May 3, 1715.

This is the second edition of the map, which was first published by Robert Sayer in 1787. A note along the bottom margin indicates this example was published in London by Laurie and Whittle, employees of Robert Sayer, at No. 53 Fleet Street.