1770. A Map of the Icy Sea in which the several Communications with the Land Waters and other new Discoveries are exhibited [Sea of the West]

A Map of the Icy Sea in which the several Communications with the Land Waters and other new Discoveries are exhibited [Sea of the West] information: 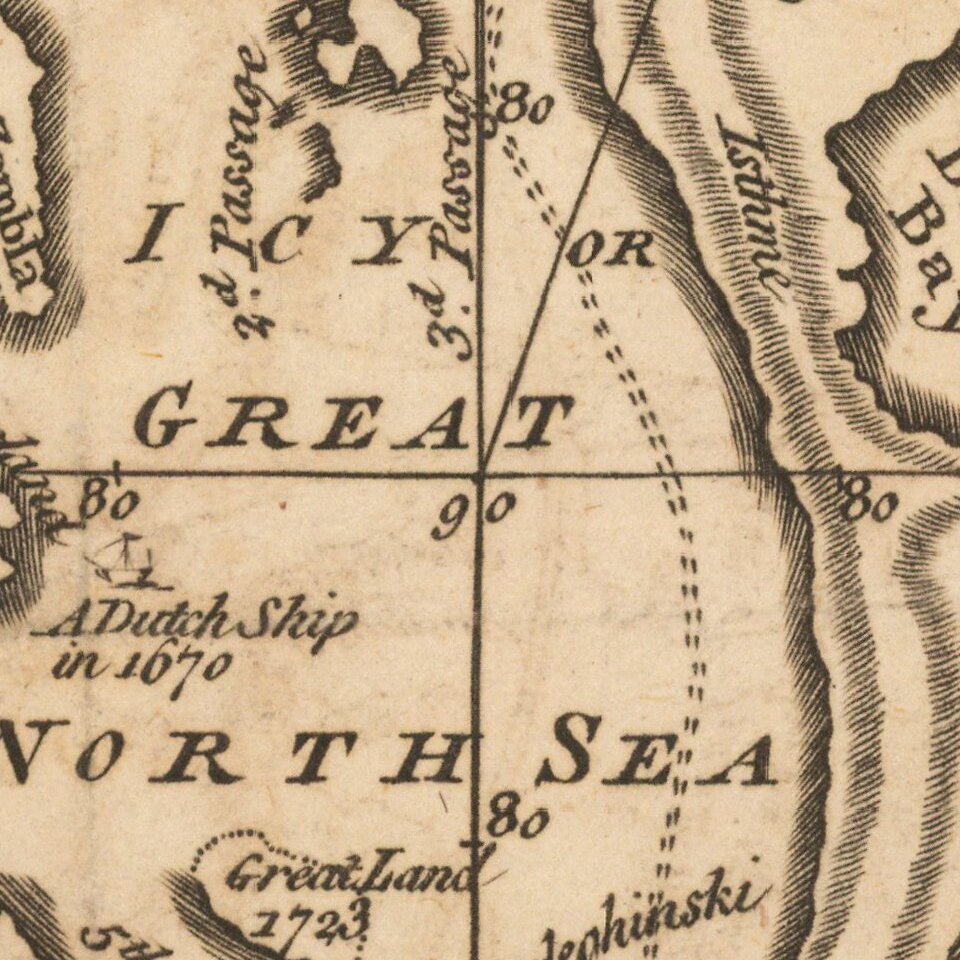 An interesting map on a north hemispheric projection, showing the regions then being actively explored by the Russians, French and English.

The projection is based upon Phillipe Buache's work from the prior decade and illustrates one view of the rapid changes along the Northwest Coast of America, Northeast Coast of Asia and Arctic Circle. In the 1740s, France and England became acutely aware of the Russian voyages of discovery by Tchirikow, Bering and others into the Northwest Coast of America, especially following the return of Jean Nicolas De L'Isle from the Russian Court. Interest in what had until then been unknown regions intensified, leading to the launch of a number of important voyages of exploration in the second half of the eighteenth century, including Cook, La Perouse, Vancouver, Dixon, Meares and others.

The map includes notes on Dutch, Portuguese and English discoveries near the North Pole. A very definite route from Japan to Portugal is shown, snaking around the apocryphal island of Jeso, or Yesso. The map shows the West Sea, a version of the mythical Sea of the West, which tentatively connects to another large inland lake which, in turn, connects, via dotted lines to Hudson's Bay. Perhaps the most salient feature of the map is the suggestion that there is no indication of any land masses or obstructions near the poles. All in all, these features highlight the importance of the ever elusive, and therefore appealing, Northwest Passage to eighteenth-century readers.

The Gentlemen's Magazine, where this map appeared, was a popular periodical in the eighteenth century and one of the first to regularly feature maps to enhance stories. Exploration was a popular topic in the magazine; it also featured Anson's circumnavigation in the 1740s, a debate over northern Pacific geography in the 1750s, and discussions of Patagonian giants in the 1760s.

The Gentleman’s Magazine was a British publication that helped to normalize the use of maps in support of articles and features. It was founded in 1731 by the prominent London publisher Edward Cave, a pioneer in periodical journalism. The magazine continued in print for nearly two centuries, shuttering production in 1922.

This was the publication which first used the word “magazine”, from the French for storehouse. Cave wanted to create a storehouse of knowledge and he employed some of London’s best writers to fill his pages: Samuel Johnson gained his first regular employment by writing for the Gentleman’s Magazine. Other famous contributors included Jonathan Swift.

The publication covered a broad range of topics, from literature to politics, and, from 1739, frequently used maps as illustrations. The first map they printed was a woodcut of Crimea; the second was a fold-out map of Ukraine by Emanuel Bowen. Maps were used to show battle lines, to chronicle voyages, and to educate about areas with which Britain traded. Certain geographers, like Thomas Jefferys, contributed several maps to the publication.