1755. A Map Of The Most Inhabited Part Of New England Containing The Provinces Of Massachusets Bay and New Hampshire. With the Colonies of Conecticut and Rhode Island . . . 1755

A Map Of The Most Inhabited Part Of New England Containing The Provinces Of Massachusets Bay and New Hampshire. With the Colonies of Conecticut and Rhode Island . . . 1755 information: 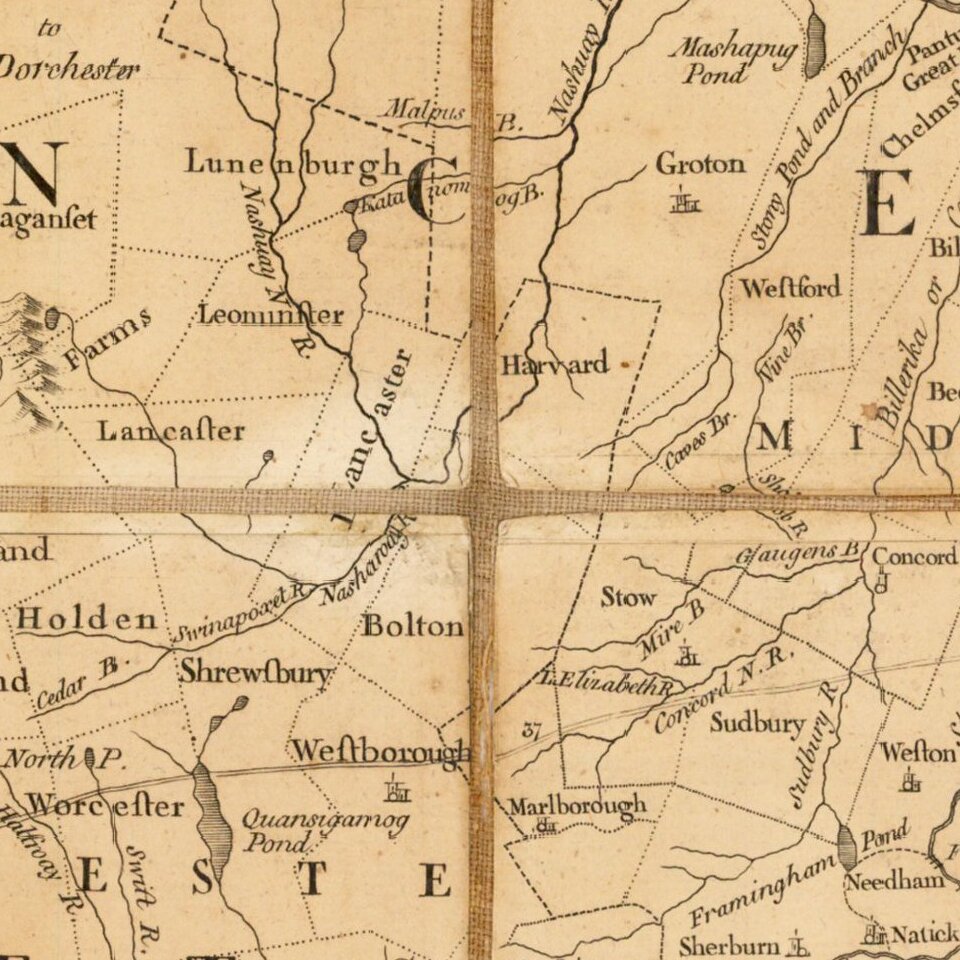 Bradock Mead's map of New England is generally considered the single most important and influential map of New England published during the British Colonial period. First issued in 1755, the map provided the largest-scale and most detailed and accurate portrait of the region to date. Its importance was such that it was revised and reissued well into the 1790s, and over this period it served as a primary source for leading European and American mapmakers.

Offered here is an example of the very rare second state of the map, which includes only a few minor changes to the cartography and toponymy of the original 1755 edition. The map was later massively reworked for a second edition in the 1760s, featuring a complete re-engraving of much of northern New England and New York. The later changes are so extensive that the map, viewed in their proper context, needs to be viewed for historical purposes as two completely different maps, the French & Indian War edition of the map (1755 and 1759) and the second edition (issued before, during and after the American Revolution). The French & Indian War edition is of the utmost rarity, while the later editions appear with some frequency on the market.

The map depicts New England to 44°30' North as well as Long Island and the Hudson River Valley. Township, county and provincial boundaries are shown, as are roads, forts, and meetinghouses. Rivers and streams are depicted with relative care, while the many mountain ranges are indicated haphazardly with archaic "molehill" symbols.

The contrast between southern and northern New England is striking: Connecticut, Rhode Island and Massachusetts east of the Connecticut River are entirely laid out in a grid of counties and townships; whereas much of New Hampshire and almost all of Vermont are denominated "Wildernes [sic] lands of the crown not yet appropriated." Further, the geography of the north country is but poorly understood, as evidenced by the sketchy detail and distended outlines of New Hampshire's Lakes Region. Present-day Vermont is shown under the aegis of New Hampshire, though the ambiguity of its status at the time is indicated by the absence of a border with New York.

Adding to the informational value and decorative appeal of the map are an early chart of Boston Harbor at bottom center, an inset plan of Fort Frederik [sic] at upper left, and a decorative cartouche portarying an idealized version of the Pilgrims' landing at Plymouth. Of particular interest is the caption on the Fort Frederick plan describing it as a "French Incroachment built 1731 at Crown Point or rather Scalp Point." This is an important sign of the map's political significance, apparently unremarked by other commentators: Like many English maps issued at the very outset of the French and Indian War, it sought to bolster English claims to sovereignty in North America while delegitimizing those of the French.

The present item represents the second state of the map, with the original "Konnektikut" spelling corrected; Bristol, King and Newport Counties added in Rhode Island; the additions of Forts Edward, Amherst and William Henry to the south of Lake George; and other changes. Thomas Streeter dates this state to 1759 based on the presence of Fort Amherst, which was constructed in that year. As mentioned above, the second edition of the map-which includes the November 1774 state most commonly seen on the market-reflects a massive re-engraving of northern New England and New York. The included major improvements to the natural geography of the region (changes to the New Hampshire Lakes Region are particularly striking) , the introduction of settlements in central and northern New Hampshire, and the division of Vermont into dozens of "Wentworth Grant" towns. A table of notes at the right lists Mead's sources for the map, and in so doing makes clear how much care and effort went into its compilation. Mentioned among others are surveys of Connecticut by Gardner and Kellock (1737, no longer extant); of New Hampshire by Hazen and Mitchell (various dates); of the Maine coast executed at the order of Governor Shirley (1754); and of Lake Champlain by unspecified French surveyors.

Oddly, the primary source for the map is not cited: William Douglass' Plan of the British dominions of New England in North America (ca. 1753). Based as it was on original surveys, Douglass' depiction of New England's physical and political geography represented a massive advance over anything then available. In particular, the large scale enabled him to show for the first time the rapidly evolving network of surveyed township, county and provincial boundaries across the region.

That said, Mead and Jefferys' map is in many ways a substantial improvement on the Douglass. To begin with, it covers much more territory than the prototype-most significantly, lands north of roughly 44° latitude, including Lake Champlain and the Maine coast east of Casco Bay. Further, Mead and Jefferys apparently had the benefit of several surveys not available to Douglass, for they added some new place names (such as "Pentusok," now Pittsfield, Mass.), introduced county boundaries, linked Cape Ann to the mainland, and gave a more accurate depiction of the so-called "Lakes Region" in New Hampshire.Thomas Jefferys was the preeminent English publisher of maps related to the American colonies in the middle of the 18th century. Braddock Mead (aka John Green) was a troubled but brilliant mapmaker who produced some of Jefferys' finest maps. Cummings describes their collaboration in British Maps of Colonial America:

[Thomas Jefferys] was the leading British chart and mapmaker of his day, and his work contributed toward making London the 'universal centre of cartographic progress.' An engraver as well as a publisher, he turned out an impressive number of maps and charts…. With William Faden, his successor, he produced the most considerable body of North American maps published commercially in the century. The genius behind Jefferys in his shop was a brilliant man who at this time went by the alias of John Green…. Green had a number of marked characteristics as a cartographer. One was his ability to collect, to analyze the value of, and to use a wide variety of sources; these he acknowledged scrupulously on the maps he designed…. Another outstanding characteristic was his intelligent compilation and careful evaluation of reports on latitudes and longitudes used in the construction of his maps… (p. 45)

This early example of the market is of the utmost rarity. We note no examples at auction or in dealer catalogues in over 20 years, with the only 2 reported auction records in the past 50 years for the first state and no records for the second state.

Baynton-Williams, “The Charting of New England,” #69 at http://www.mapforum.com/02. McCorkle, New England in Early Printed Maps, #698.6 (getting the date wrong); Verner, The English Pilot. The Fourth Book, #29.