A New and Correct Chart of the Atlantic Ocean Drawn from The most authentic Documents, By J.W. Norie Hydrographer, &. 1819. Corrected 1826 and 1830 information: 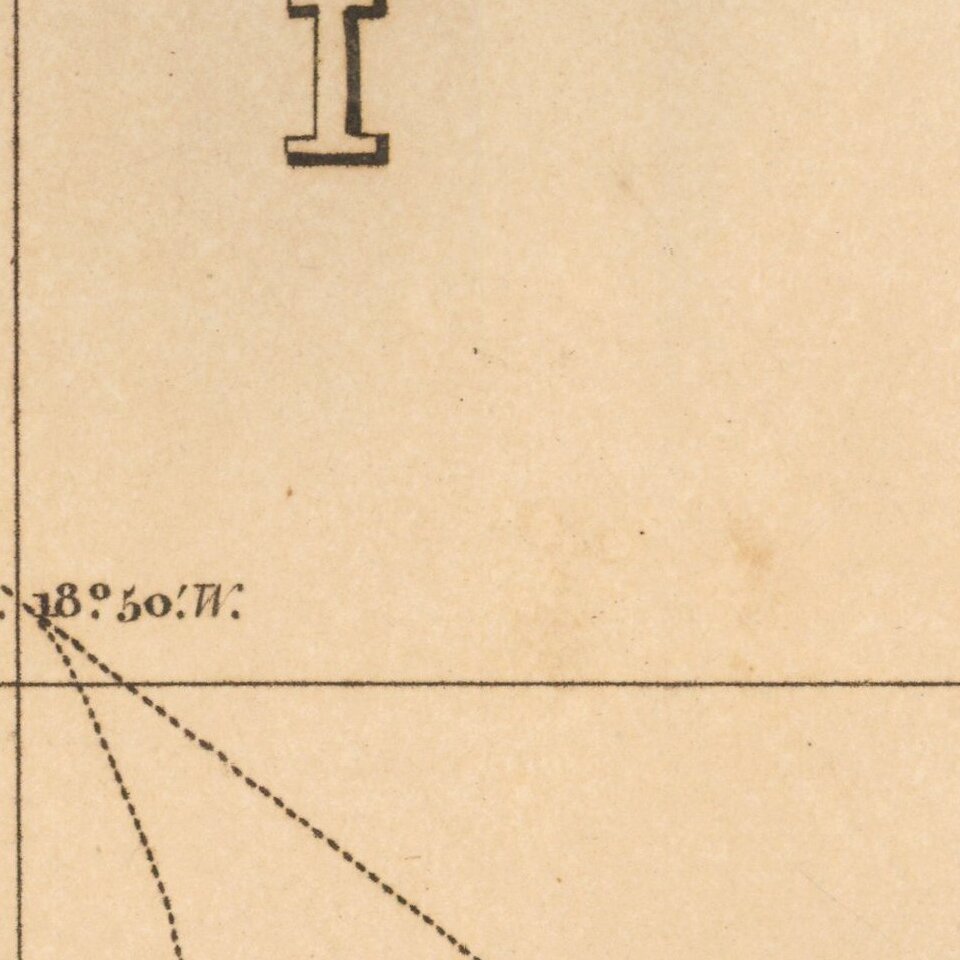 Impressive, rare example of a blueback chart of the southern Atlantic and Indian Oceans, showing the major shipping routes around the Cape of Good Hope. The chart, twice corrected, was issued by J. W. Norie, then the most successful private chart seller in London.

The long chart shows the easternmost part of South America, the southern half of Africa, and Madagascar. Snaking around the continents, which lack interior detail as was characteristic of navigational charts, are suggested sailing routes to major ports and resting places, including Rio de Janeiro, St. Helena, and the Cape of Good Hope. Two routes to the East Indies are shown, depending on the time of year.

At sea, several compass roses are ready to aid in the drawing of a sailing route with a parallel ruler. Tiny shoals and possible obstructions are shown at an exaggerated scale, which aided ship masters who were planning long journeys. Many of these are labeled as “doubtful,” showing the ever-evolving navigational knowledge of even a well-traversed area like the southern Atlantic.

The small scale of the chart allowed a master to plan his entire route, a major advantage because masters had to buy their own charts and hoped to gain as much information as possible from a single chart. As the routes show, ships tended to stay well out at sea, meaning a master would not need more specialized charts of coastlines. In port, they would call upon a local pilot to guide them into the docks.

The chart contains minimal decoration beyond the elaborate title cartouche set into the interior of Brazil. Curly lettering proclaims that this map was drawn from authentic documents, including, most likely, Admiralty charts, and drawn under the supervision of J. W. Norie, hydrographer. It was engraved by Stephenson. John Stephenson engraved under Norie’s boss, William Heather, and continued to engrave for Norie after he took over the business in 1813.

Admiralty and privately-issued charts in Britain in the nineteenth century

Admiralty-issued charts today enjoy a considerable reputation based on their accuracy, professional surveying, and high-quality printing. However, for the majority of the nineteenth century, merchant mariners preferred the privately-issued blueback charts of firms like Norie’s. This is because the Admiralty did not always sell their charts to the general public, and many of the chart firms had long histories and loyal customers.

The Admiralty’s Hydrography Office was only founded in 1795. They produced their first chart in 1800; this chart, of the island of Houat off the west coast of France, was not commercially available. It was intended for Royal Navy use only. It would be decades before the Hydrography Office to build up the infrastructure, expertise, stock, and technology to provide all Admiralty ships with the necessary charts. In the meantime, naval officers, like merchant mariners, continued to procure charts from the same source they had always used: private chart sellers.

Norie’s employer, William Heather, had acquired the chart stock of Mount & Page in 1765. Heather had been trained by John Hamilton Moore, a rather colorful chart seller, and struck out on his own in the mid-1790s, setting up shop in Leadenhall Street. He specialized in not only charts, but also instruments, navigation texts, and sailing directions. In short, he sold all that a sailor could need to safely navigate the high seas.

By 1800, Heather was selling large quantities of charts to the Navy and the merchant marine; after Norie joined the firm these charts only increased in quality and quantity. Following the example of competitors like Robert Laurie and James Whittle, Norie issued pilots, which were folio-sized collections of charts. They also sold individual charts, backed with blue paper, and these became known as the bluebacks. By the early nineteenth-century, the Heather-Norie partnership was challenging Laurie and Whittle for primacy in the market and was expanding the coverage of their charts beyond the main Atlantic routes.

The commercial chart makers were squeezed by the increasing demand from British shipping and the raised expectations brought by new surveying techniques and more precise instruments. Unable to commission their own surveys, which were prohibitively expensive and therefore left to the Royal Navy, the commercial chart firms gathered what new information they could and reissued old charts with these improvements. This has clearly occurred with this chart, which was originally issued in 1819, with updates in 1826 and 1830.

This strategy made Norrie the most successful of the chart sellers in the 1820s and 1830s (Heather had died in 1813), precisely when this chart was made. However, pride of place was soon to be challenged by Admiralty charts, which entered the market in large numbers around 1840. The Admiralty had made surplus charts available to the general public since 1821, but it had taken two decades for them to gain a place in the already crowded market.

The Admiralty list was ten times larger than any single publisher and based on the latest surveys available. Their sale price, usually only one or two shillings, was so low because the Admiralty did not account for the cost of production in their sales. The superior quality of the Admiralty charts led chart sellers like Norie to copy details from the Admiralty charts into their own works, thereby increasing their accuracy and allowing them to offer new products to their loyal customer base. Private chart sellers maintained a popularity amongst the merchant marine, while Admiralty charts dominated Royal Navy chart tables.

Why did the merchant marine continue to buy more expensive and relatively less up-to-date privately-made charts? Part of the reason lies in the lack of promotion by the Admiralty. Another was the design of the charts. The large-scale Admiralty charts were unwieldy and difficult to use at sea. They showed only a very small area, making sailors flip between several loose charts to mark their course. The smaller-scale, more general charts of the private firms, by contrast, showed destination and departure point on the same chart and they tended to have insets of ports. Merchant mariners usually stayed in deep waters until they neared their port of call, when they would call a pilot. They did not need closely-detailed coastal charts like war ships did. Also, the more expensive private charts tended to come with free sailing directions, which mitigated the price differential.

Take the present chart as an example. It highlights the main Atlantic sailing routes between major ports of call—England to Rio de Janeiro, Rio de Janeiro to the East Indies via the Cape of Good Hope and around Madagascar, and voyages to and from St. Helena. A master could plot his course, which did not require coasting or getting near shore, except in the tricky waters of the Cape of Good Hope. There, helpful notes and sailing directions offer aid to the navigator. One chart could serve many destinations, which was an advantage at sea.

Norie’s dominance dwindled after his death, although his firm continued to trade under the name Norie & Wilson. Charts sold by James Imray, who had taken over Moore’s business, became the most popular with masters. After 1850, when the Board of Trade took over responsibility for the safety of merchant ships, Admiralty charts were recommended over privately-made charts, but were not compulsory.

By the late-nineteenth century, the three remaining firms, including Norie & Wilson, were struggling. Led by William Wilson, the three consolidated. First Norie & Wilson merged with the Imrays in 1899, followed by the Laurie firm in 1903. The business became known as Imray, Laurie, Norie & Wilson. They shifted to publishing charts for small vessels, including fishing boats and yachts, and are still in business today.

The chart is very rare. We note only the examples at the National Maritime Museum and the Boston Public Library.

This chart is a microcosm of this larger history. It depicts some of the busiest shipping routes of the early nineteenth century and reveals much about sailing practice. It would be a fascinating and impactful addition to any chart collection.