1755. A New Map of Jamaica. In which the Several Towns, Forts, and Settlements are Accurately laid down as well as ye situations & depts of yet most noted Harbours & Anchoring Places, with the limits & boundarys . . . Made by Mr. Shefield and others from the Y

A New Map of Jamaica. In which the Several Towns, Forts, and Settlements are Accurately laid down as well as ye situations & depts of yet most noted Harbours & Anchoring Places, with the limits & boundarys . . . Made by Mr. Shefield and others from the Y information: 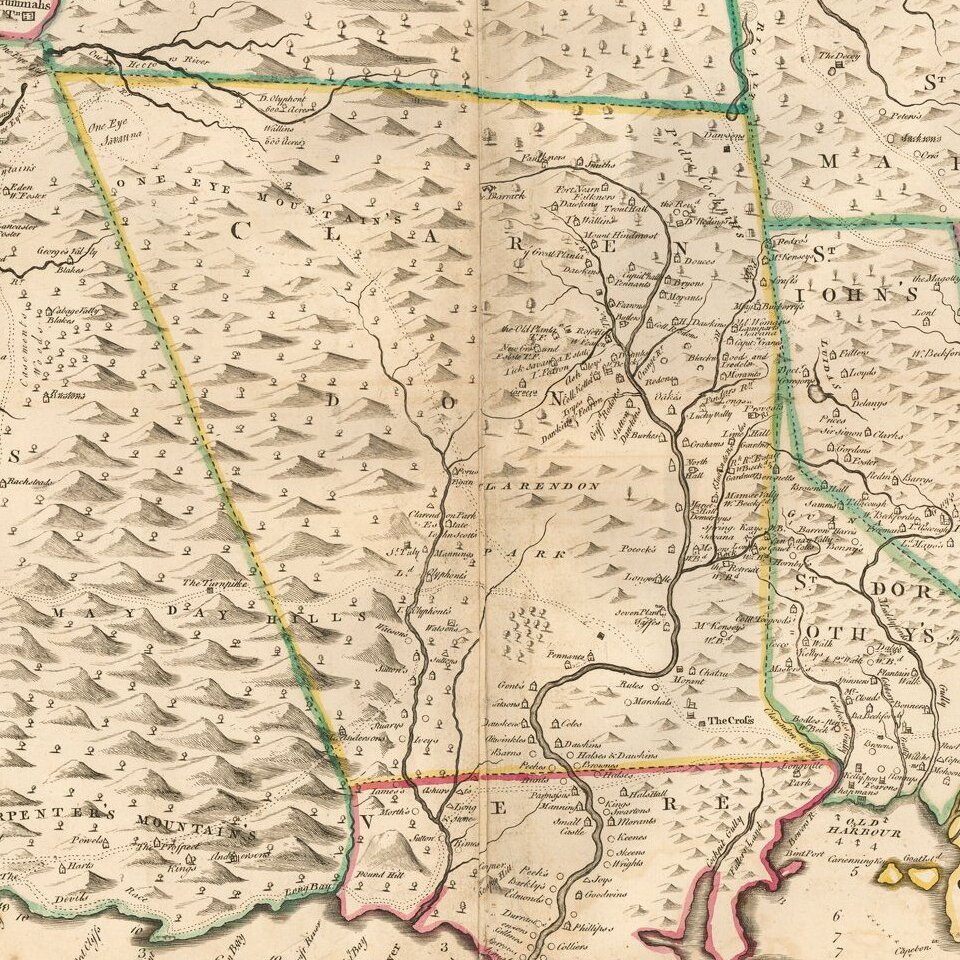 The true first state of the first large format Map of Jamaica.

Fine 2-sheet map of Jamaica, published in London in 1755, engraved by J. Bayly.

The map includes topographical details and some roads, shows the sites of many sugar plantations, most of which were located in the southeast near the harbors. The map is the most detailed and exact for Jamaica published to its time. It locates "Gentlemen's Seats," sugar works, churches, taverns, "crawls," "ginger, coffee, and indigo settlements," barracks, etc.

The large inset shows both the portion of Port Royal destroyed in the earthquake of 1692, the part which was still standing, and the part which had been built back up by natural or artificial means in the intervening 70 years. The note reads:

The Whole is an exact plan of the Town as it Stood before the Earthquake, the hatched part & that within ye hatched lines being all that was left after the Shock; and the dotted Space, A representation of the land thrown up Gradually by the Sea, or Made by Art Since that time.

When the earthquake struck the place, Port Royal was the unofficial capital of Jamaica, and one of the busiest, and most disreputable ports in the West Indies. It was a frequent port of call for privateers and pirates. The town was built on soil that was susceptible to liquefaction, and when the quake struck a torrent of water engulfed the city. Renny recounts the ordeal in his An History of Jamaica (1807):

All the wharves sunk at once, and in the space of two minutes, nine-tenths of the city were covered with water, which was raised to such a height, that it entered the uppermost rooms of the few houses which were left standing. The tops of the highest houses were visible in the water and surrounded by the masts of vessels, which had been sunk along with them.

Interestingly, the earthquake can be timed relatively precisely to 11:43 AM from a stopped pocket watch that was discovered in the harbor during an archaeological dig in 1969.

Patrick Browne (circa 1720 - circa 1790) was an Irish physician and Caribbean natural historian, who traveled extensively throughout the West Indies. He had a keen interest in botany and history, and was a correspondent with Linnaeus. His most important work was A Civil and Natural History of Jamaica in 1756, with plant illustrations by Georg Ehret. Browne was first sent to live with relatives in Antigua in 1737, but returned to England after two years due to ill health. He studied to become a physician in London, and from 1746 he was a resident of Jamaica. In 1771, he returned to his native County Mayo to retire.

Browne's map would be followed by other superb 18th century maps of Jamaica by the likes of Craskell & Simpson (see examples we have previously handled /gallery/detail/31949 and /gallery/detail/21967).

These three maps represented the best mappings of Jamaica until the Robertson map was issued in 1804. The commitment to mapping Jamaica, underscores the incredible importance of that island to the British Empire during the 18th century.

The map was published 15 years after the conclusion of the First Maroon War, fought between British colonials and the freed black population who inhabited Jamaica's interior. The map likewise came just before the onset of the French and Indian War and the commencement of Thomas Craskell's impressive survey of the island (both of which began in 1756).