A New Mapp of the World by Robert Greene information: 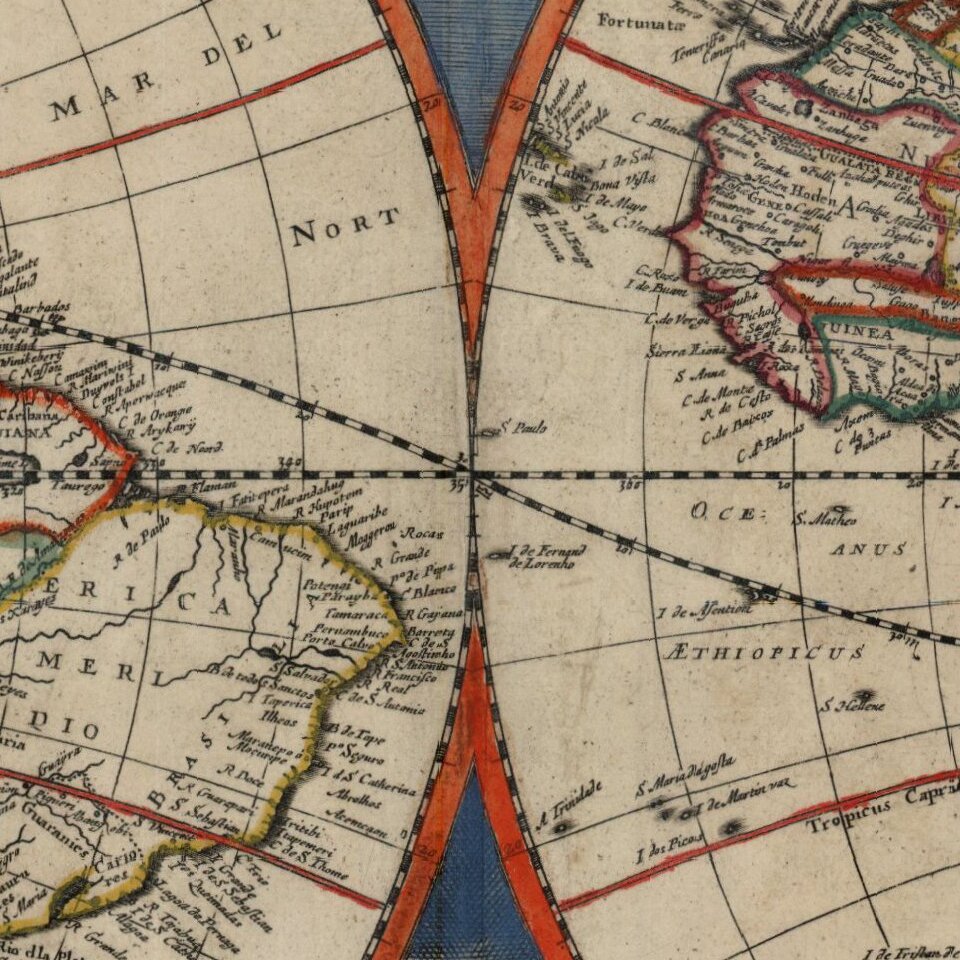 Rare English double-hemisphere map of the world, published in London by Robert Greene.

In a time when most decorative world maps were copied from one or two Dutch models, Greene's map stands out as an original work. Additionally, Green's map is quite possibly the earliest world map engraved and published in England to include a set of polar hemispheric projections.

Finally, it is also one of the earliest obtainable world maps published in England to show the coastline of New Zealand, along with Morden & Berry's rare two-sheet Mercator projection map, dedicated to Captain John Wood.

While original, Green's map is still drawn from contemporary Dutch sources, as much of English mapping was in this period. In the far northwest of the Pacific is the “Strate d Vries” and “Compagnes Land.” Juan de Gama, the grandson of Vasco de Gama, was a Portuguese navigator who was accused of illegal trading with the Spanish in the East Indies. Gama fled and sailed from Macau to Japan in the late sixteenth century. He then struck out east, across the Pacific, and supposedly saw lands in the North Pacific. Several voyagers sought out de Gama’s lands, including the Maarten Gerritszoon Vries in 1643. Compagnies Land, along with Staten Land (“Staten I” on this map), were islands sighted by Vries on his 1643 voyage. He named the island for the Dutch States General (Staten Land) and for the Dutch East India Company (Compagnes, or Company’s Land). In reality, he had re-discovered two of the Kuril Islands.

Across the sea, a coast labelled “Anian” is separated from North America by a “Strate Anian.” Anian derives from Ania, a Chinese province on a large gulf mentioned in Marco Polo’s travels (ch. 5, book 3). The gulf Polo described was actually the Gulf of Tonkin, but the province’s description was transposed from Vietnam to the northwest coast of North America. The first map to do so was Giacomo Gastaldi’s world map of 1562, followed by Zaltieri and Mercator in 1567. The Strait then became shorthand for a passage to China, i.e. a Northwest Passage. It appeared on maps until the mid-eighteenth century.

Australia is defined by the Dutch encounters with the west coast, the result of shipwrecks or voyages sent by the powerful Dutch East India Company. For example, a note in the south mentions Pieter Nuyts, a Dutch navigator who commanded the Gulden Zeepaert along the southern coast in 1627. The waters near Australia are also defined by the voyages of Tasman in the early 1640s. He first charted Van Diemen’s Land, or Tasmania, as well as the west coast of New Zealand.

The two polar projections fit neatly in the space between the hemispheres. The south pole is largely empty, representing a conservative cartographic approach to the area. Other mapmakers routinely included a massive southern continent, although none had been sighted to this time. The north pole is more crowded, thanks to numerous voyages seeking the Northeast or Northwest Passage in the century prior to this map’s creation.

California is shown as an island, with “Nova Albion”, so named by Sir Francis Drake, as its northernmost coast. From its first portrayal on a printed map by Diego Gutiérrez, in 1562, California was shown as part of North America by mapmakers, including Gerard Mercator and Abraham Ortelius. In the 1620s, however, it began to appear as an island in several sources.

By the 1620s, many mapmakers chose to depict the peninsula as an island. These included Henricus Hondius, who published the first atlas map to focus solely on North America with the island prominently featured in 1636. Hondius borrowed his outline of California from another widely-distributed map, that of Henry Briggs and printed in Samuel Purchas’ Hakluytus Posthumus or Purchas his Pilgrimes (1625).

Other prominent practitioners like John Speed and Nicolas Sanson also adopted the new island and the practice became commonplace. Father Eusebio Kino initially followed along with this theory but after extensive travels in what is now California, Arizona, and northern Mexico, he concluded that the island was actually a peninsula. Even after Kino published a map based on his travels refuting the claim (Paris, 1705), California as an island remained a fixture until the mid-eighteenth century.

Greene's map features an unusual set of iconographic embellishments, which are seemingly unique to this map and very different from other maps of the period. Perhaps most interesting are the four scenes representing methods of hunting on each of the four continents. These include a centaur with bow and arrow in Africa (lower right corner), a stag hunt in Europe (upper left corner), a bonfire in the Americas (lower left corner), and what appears to be a duel in Asia (upper right corner).

The four corners of the map are further decorated with male and female royal figures representing the four continents, an unusual deviation from the normally exclusively-female allegorical images of the continents employed by most other map makers. Interestingly, the figures for Europe are most likely Charles II, King of England (r. 1660-1685), and his wife and Queen Consort, Catherine of Braganza. The couple never had children, so the young boy and woman in the image are likely attendants.

The iconography of Greene's map is discussed at length in Jane M. Kinney's Mapping Literature: Cartography in the World Literature Classroom. Kinney notes the map's symbolic role in the evolution of the way in which Europeans perceived the world:

At the four corners of the print, the peoples of the four main continents are represented. The Europeans, in the top left corner, are represented by a man in ermine robes, wearing a long curly wig and holding a cane; a woman, also in ermine robe and wearing what appears to be a crown on her head; and a younger woman and a small boy, both elegantly dressed, apparently the offspring of the noble, if not royal, couple. The people of Asia are more exotic, wearing long robes and more ornate headdresses than the Europeans, but the man, the focal point of the group, looks across towards the European group. The Africans, in the lower right corner, are quite European in dress and appearance, although the woman reveals one leg, and the group appears to have fewer symbols or trappings of authority than do the Europeans. The Americans, in the lower left corner, also look European but are wearing short skirts and headdresses of feathers, and the woman and child are bare chested. Clearly the standards here, the understanding of what peoples are, are Eurocentric. The background scenes for each group are also interesting. The European landscape has people stag hunting on horseback; the Asians are engaged in man-to-man combat, also on horseback; the African scene shows a group of naked males hunting, on foot and accompanied by a centaur, although further in the background a warrior clad in robes and turban with sword raised rides a rearing horse away from a grazing elephant; three of the Americans appear to be kneeling by a flaming frame, while another runs toward them, carrying a bow, and yet another walks away with spear in hand.

Taken together, the images included on this map show European concepts of other peoples and, tacitly, of their own superiority: all the peoples shown have essentially European features, but the Africans and Americans are less well dressed and have strange beasts and customs. It is the Europeans who have pride of place, who wear and display the symbols of power (ermine robes, the crown, a scepter upraised in the woman's hand, etc.) and who stand atop the western hemisphere, thus visually controlling the New World and the peoples below; they apparently are also more civilized than the barbaric fighting Asians and the naked pedestrian hunters in the African scene. One could easily use this map to introduce discussions of the expanding knowledge and horizons of the western world, but also the growth of imperialism and the remnants of the strange and marvelous that still exist (the centaur pictured in Africa).

Shirley was able to locate only two examples, a damaged example in the British Library and an example which sold at Sotheby's on December 1, 1983. There is also a copy in the National Library of Australia and the New York Public Library also holds an example which is bound into a Samuel Thornton sea atlas, dated 1686.

Edward Brooke-Hitching, The Phantom Atlas: The Greatest Myths, Lies and Blunders on Maps (London: Simon and Schuster, 2016); Thomas Suarez, Early Mapping of the Pacific (Hong Kong: Periplus, 2004); Lawrence C. Wroth, “The Early Cartography of the Pacific,” The Papers of the Bibliographical Society of America 38, no. 2 (1944): 87-268; Gunter Schilder, Australia Unveiled: The Share of the Dutch Navigators in the Discovery of Australia (Amsterdam: Theaturm Orbis Terrarum Ltd., 1976); R. Clancy, The Mapping of Terra Australis (Macquarie Park: Universal Press, 1995); McLaughlin with Mayo, The Mapping of California as an Island: An Illustrated Checklist; Leighly California as an Island: An Illustrated Essay; Polk, The Island of California: A History of the Myth (Spokane: Arthur H. Clark Company, 1991); Shirley, map 476. KAP