1743. A Plan and Prospect of The Harbour, Town, & Castles of Carthagena, Most humbly Presented to Edward Vernon Esq. Vice Admiral of the Blue, &c. By Capt. Ph. Durrel.

A Plan and Prospect of The Harbour, Town, & Castles of Carthagena, Most humbly Presented to Edward Vernon Esq. Vice Admiral of the Blue, &c. By Capt. Ph. Durrel. information: 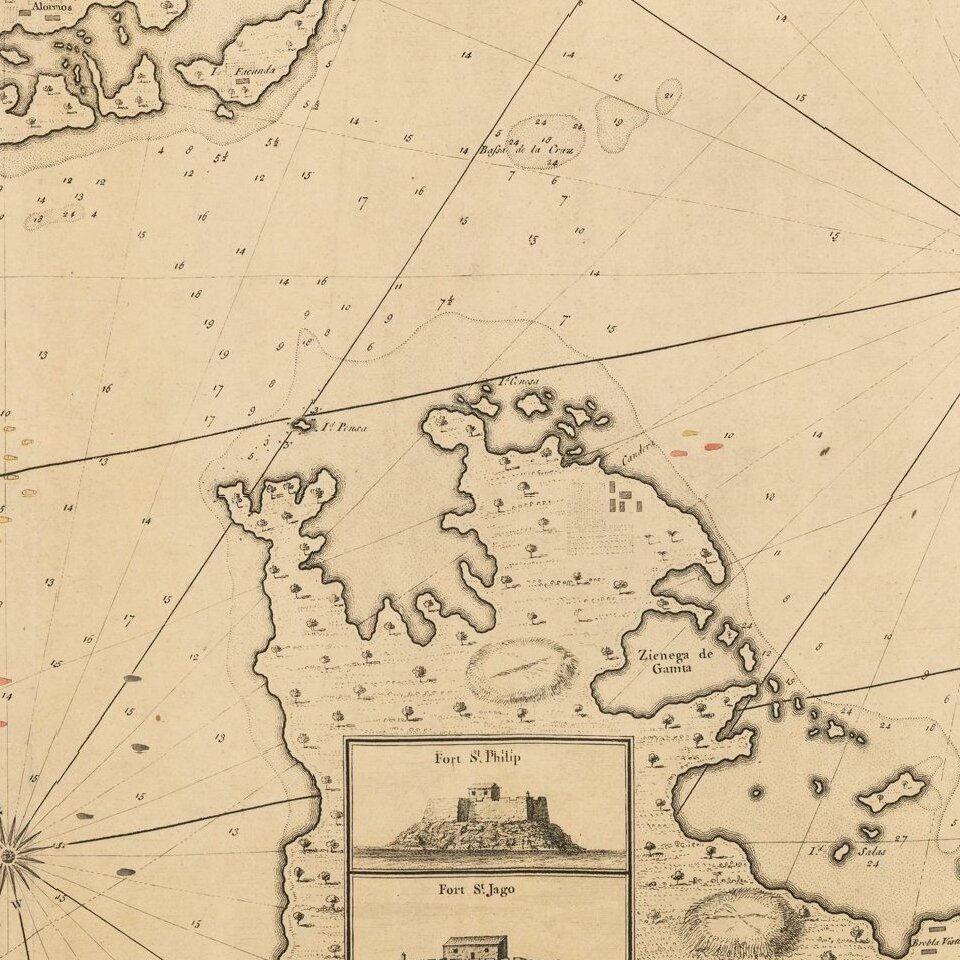 An Impressive and Rare Separately Issued Map of the Battle of Cartagena in 1741, showing Vernon's Fleet in Action in the Harbor.

Engraved map of Cartagena and environs with touches of original hand-coloring.

The present map is an exceptional example of mid-18th century English cartography. The elaborately-engraved cartouche in the upper left and scale of miles in the upper right are characteristic of the great maps of the day. The map is replete with additional inset views of the city as a whole ("Prospect of the City of Carthagena, Bearing NNW"), Fort St. Philip, Fort St. Jago, Fort Cambia, Bocca Chica, or Castle St. Louis, Fort St. Joseph, Castle Grande.

The Battle of Cartagena

The Battle of Cartagena de Indias was an amphibious military engagement between the forces of Britain under Vice-Admiral Edward Vernon and those of Spain under Admiral Blas de Lezo. It took place at the city of Cartagena de Indias, in March 1741, in present-day Colombia. The battle was a significant episode of the War of Jenkins' Ear and a large-scale naval campaign.

Cartagena, in the 18th century, was a large and rich city of over 10,000 people. It was the capital of the province of Cartagena and the main town had significant fortifications that had been recently repaired, increased and improved with outlying forts, batteries and works. Its harbor was considered one of the finest in the world and it served the galleons of the commercial fleet, Galeones a Tierra Firme y Perú, that annually conveyed through Havana to Spain the immense revenues of gold and silver from New Granada and Peru.

Founded by Pedro Heredia in 1533, it had been the target of conquest in the past and was captured by the English, under Francis Drake, in 1585 and by the French, under Baron de Pointis in 1697. The city faces the Caribbean to the west, to the south its bay has two entrances: Boca Chica (Little Mouth) and Boca Grande (Big Mouth). Boca Chica was the only deep water entrance and was so narrow it allowed the passage of only one ship at a time. This entrance was defended on one side by the Fort San Luis with a couple of small outworks on the peninsula of Terra Bomba and on the other side by the fascine battery Baradera.

Beyond Boca Chica was the great lagoon of the outer harbor with an entry channel into the inner harbor between two peninsulas, each defended by a fort. The walls of the city itself mounted some 160 cannon and the suburbs 140 guns. The city was surrounded by a water-filled ditch and its gates supported by recently built bastions. The suburbs were also surrounded by a wall and ditch. About a quarter mile south from the city on a hill was Fort San Lazaro, a square fifty feet on a side with three demi-bastions. The position of Fort San Lazaro commanded the city itself and the plane around the hill. There was also a small hill nearby that commanded Fort Lazaro, but there was no fresh water source available outside Cartagena and the fort. The road from the best landing point, the beach at Texar de Gracias, to Fort Lazaro, was three miles long.

The British invasion force consisted of:

The expedition and battle lasted for days and ended with the British fleet withdrawing in defeat, with 18,000 dead or incapacitated, mostly by disease. The Spanish also suffered severely from disease including Blas de Lezo himself, who died a few weeks after falling ill from the plague from unburied bodies. In addition a total of 50 British ships were lost, badly damaged, disabled or abandoned for lack of crews. There were nineteen ships of the line damaged, four frigates and twenty-seven transports lost.

Of the 3,600 American colonists, who had volunteered, lured by promises of land and mountains of gold, most died of yellow fever, dysentery, and outright starvation. Only 300 returned home, including Lawrence Washington, who renamed his Virginia plantation, Mount Vernon after Admiral Vernon.

Philip Durell (1707-1766), was a prominent British naval officer during some of the most important actions of the first half of the 18th century.

According to the Dictionary of Canadian Biography:

After receiving his early education from an aunt, Philip Durell entered the navy through the offices of his uncle, Captain Thomas Durell. He joined the latter's ship, the 20-gun Sea Horse, as ordinary seaman in 1721. Three years later, as able seaman, he joined the Ludlow Castle (40 guns). During his formative years from 14 to 19 he served on the Newfoundland, Nova Scotia, and New England stations in these two ships. He was commissioned lieutenant in 1731, and while in the West Indies was appointed to the 40-gun Eltham as post captain on 6 Feb. 1742/43 (o.s.).

Later he participated in the capture of Quebec, in 1759. He was promoted to rear-admiral of the red on 14 February 1759, and on 14 June 1761 he was appointed port admiral of Plymouth. On 21 Oct. 1762 he was promoted vice-admiral of the blue and in 1766 was named commander-in-chief of the North America station in succession to Colvill.