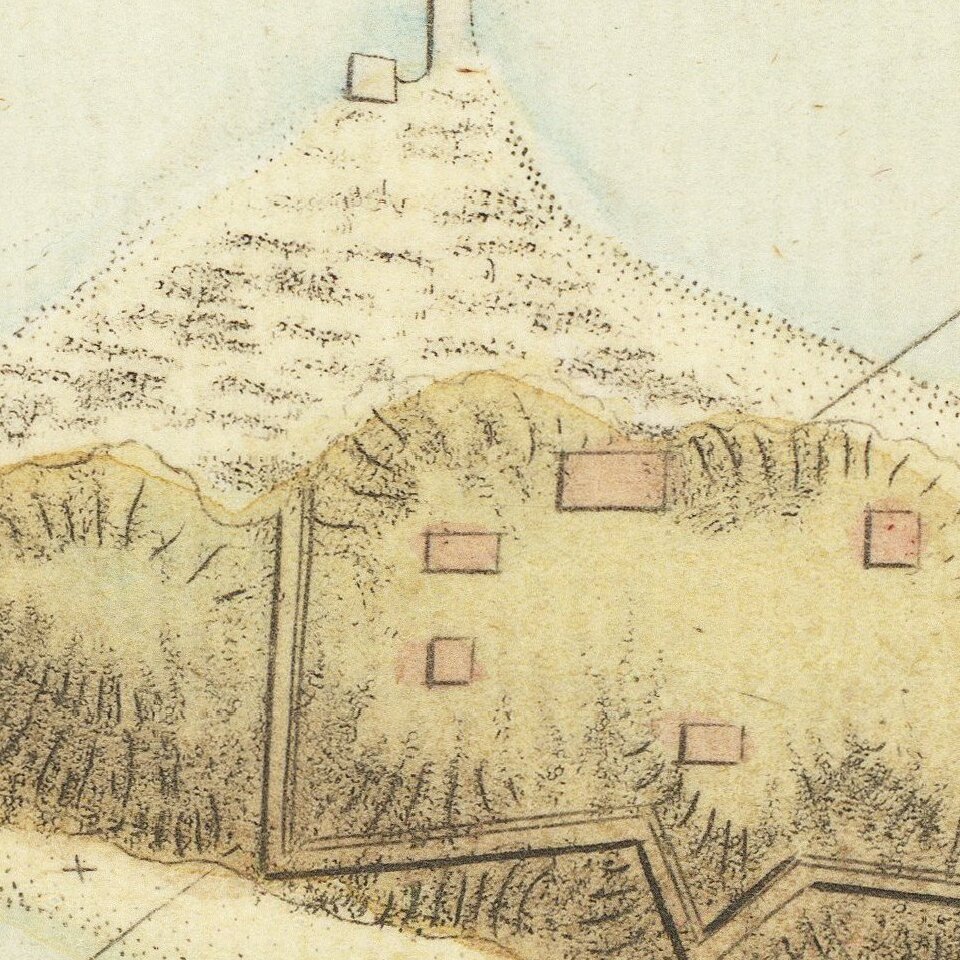 The earliest printed plan of Newport, Rhode Island, published for the use of British forces just months before they occupied the town in December 1776. Based on surveys by Charles Blaskowitz, one of the finest surveyors in the British military, it is also arguably the most appealing plan of Newport ever issued: The overall layout, superb detail and excellence of the engraving all make for a most satisfying image.

In 1764, the year of Blaskowitz’ survey, Newport was the largest town in Rhode Island, boasting a population of more than 7000 and grown wealthy through trade via its safe, commodious harbor and the manufacture of sperm oil and spermaceti candles. Indeed, the plan conveys well the impression of a large town with a thriving maritime economy.

The very large scale enables Blaskowitz and Des Barres to depict Newport in great detail. The street plan is laid out, clearly constrained by the line of low hills just east of the harbor; the many wharves are shown with an effort to depict their actual “footprints;” as are windmills, rope walks and the fortifications on Goat Island. The detail is such that large gardens can be seen laid out behind several of the town’s fine homes. An alphanumeric legend in the lower third of the map identifies street names, wharves and public buildings. Reflecting Rhode Island’s long history of religious tolerance, fully ten of these are places of worship representing at least six denominations. Among them are the “Jews (i.e., Touro) Synagogue,” built in 1763 and still standing today, making it the oldest synagogue in the United States.

Much attention is also given to the natural topography in and around Newport. Several forms of shading and symbols are employed to indicate areas of elevation, wetlands, and woodland, as well as to differentiate rocky from sandy shorelines. Per Sellers & Van EE, this is the second state of the plan, with a single-rule border and elevations indicated by light hachuring.

No substantially new plan of Newport was published until the middle of the 19th century.

The plan was issued in The Atlantic Neptune, an atlas of North American waters used by British navigators throughout the American Revolution. The charts were of an extraordinarily high quality, remained the standard for decades, and were often copied and reissued by American and European engravers and publishers.

Though the Neptune is most frequently associated with publisher J.F.W. Des Barres, its many New England charts, plans and views were based on surveys overseen by Samuel Holland, a Dutch-born surveyor and engineer who entered British service during the French and Indian War. After the War Holland had proposed to the Board of Trade “an accurate and just Survey… upon… a general scale and uniform plan” of North America east of the Mississippi. (Harley, p. 27) This was to be a “geodetic” survey following the most advanced methods then in use in Europe, but applied for the first time in North America: The locations of control points would be established by rigorous astronomical observation, intermediate areas pinpointed by triangulation, and details sketched in from direct observation.

Holland’s proposal was approved, and in 1764 he was named Surveyor General of the Northern District of North America, extending from the Potomac to the Canadian Maritimes (Similarly, one William Gerard de Brahm was appointed Surveyor General of the Southern District, with responsibility south and west to the Gulf of Mexico.) After several years’ work in Canada, from 1770-1774 Holland focused on the New England coast, making his headquarters in Portsmouth, New Hampshire. From there he sent out semi-autonomous survey teams, headed by deputies Charles Blaskowitz, James Grant, George Sproule, Thomas Wheeler and Thomas Wright. All told, he probably had more than 50 men working under his direct supervision, in addition to the services of the sloop HMS Canceaux under Commander Mowatt.

It was Charles Blaskowitz who in 1774 oversaw the survey of the Narragansett Bay area, including Newport and its superb harbor. Born in Prussia around 1743, Blaskowitz had entered the British Army at a young age, served in the Royal American Regiment during the French and Indian War, and assisted Holland in a major survey of the St. Lawrence River after the capture of Quebec. Thereafter Blaskowitz was detailed in 1764 to survey Narragansett Bay, in order to assess Newport’s suitability as a naval base. Upon his return to Quebec he re-joined Holland, who in the interim had been appointed Surveyor General of the Northern District. Blaskowitz served as one of Holland’s deputies until the outbreak of the American Revolution, and, given his previous experience, was the natural choice to lead the team surveying Narragansett Bay.

Holland sent copies of many of his maps to J.F.W. Des Barres in London, who assumed responsibility for their publication, with sponsorship and funding from the Admiralty, as well as publishing the work of De Brahm and other surveyors active in North America. In all, more than 250 charts, maps and recognition views were produced, many in multiple states and editions, along with numerous letterpress sheets of sailing directions. These were compiled to produce the atlas known as The Atlantic Neptune.

Copies of the Neptune were apparently made up to order, and new charts, maps and views were being produced throughout the Revolutionary years, and there was thus no standard collation. The most complete versions extended to five volumes, covering in turn Nova Scotia, New England, the River and Gulf of St. Lawrence (based on the work of James Cook), the coast south of New York, and American coastal views. The volumes integrated nautical charts, recognition views and sailing directions to provide seamen with multiple, (hopefully) complementary data sets for navigating the often difficult waters off the East Coast and Gulf of Mexico. Exceeding the original focus on navigational aids, Des Barres also included a small number of town plans such as this Plan of the Town of Newport, as well as plans and views of military engagements during the Revolution.

Blaskowitz’ surveys of Newport and Narragansett Bay apparently saw much use; according to Johnson, Edward Fage, the chief engineer of the British garrison at Newport, used them to plan the town’s defenses. In 1777, a year after Des Barres published Blaskowitz’ surveys, London publisher William Faden issued derivative editions of both the town plan and chart of the Bay. Ironically, in 1778 Parisian publisher le Rouge issued a French-language copy of the chart of the Bay with an inset plan of the town, both based on Blaskowitz’ work. It is not clear whether this came in time to support the Franco-American campaign in Rhode Island that year, but it would certainly have proven useful when the French made the area their main naval base from 1780 on.

In all, the most historically significant and attractive Revolutionary-era plan of one of the most important towns in Colonial America.

Des Barres chart is quite rare on the market. We note 2 examples at auction and 1 in a dealer catalog in the past 20 years.