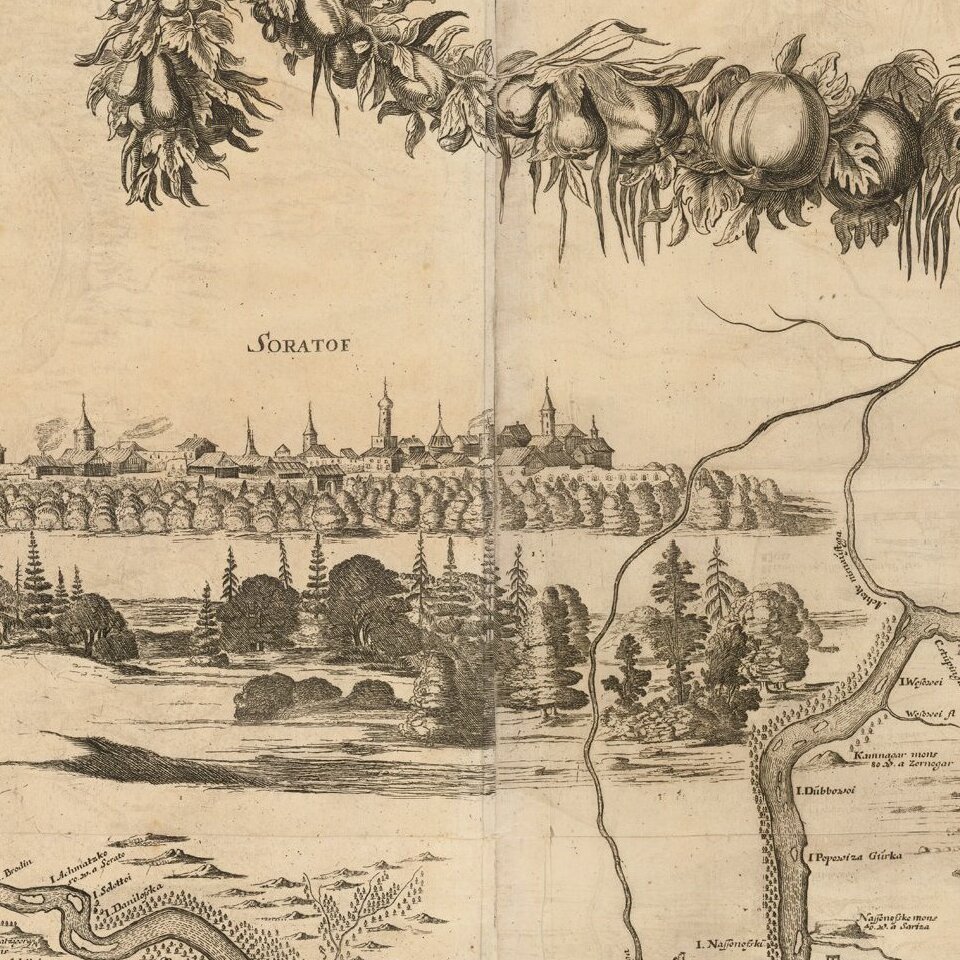 Nice example of Olearius' map of the Volga River, first issued in 1647 and engraved by Christian Rothgiesser.

Shows the course of the Volga from Nischni Nowgorod to the Caspian. Includes vignette views of Saratow and Astrachan.

Olearius's map of the lower Volga is the most important map 17th Century map of the River. The map is also richly illustrated with views of a Russian log dwelling with peasant farmers harvesting outside; a view of the city of Saratov; and a view of Astrakhan, Persia's city at the mouth of the Volga. Camels and a Tatar wagon appear in the foreground of the view, where Tatar merchants set out their wares.

Adam Olearius (Adam Oelschlaeger) participated in an embassy to Moscow and later to Persia, in an attempt to secure for Frederick III a favorable position at the end of the Silk Route. He travelled extensively in Russia and Persia, meeting with the Czar and the Shah. The party's descent of the Volga resulted in the first detailed mapping of the river and Olearius' account of the expedition, first published in 1647, is one of the most important early accounts of European travels in Russia.

Olearius map of the Volga is the most accurate 17th century map of the lower Volga river valley, then a key area along Europe's eastern frontier. "There is no comparing Olearius' Volga with those primitive representations seen on earlier maps, such as those of Massa and Visscher" (Bagrow). Olearius' map was quickly copied by Jansson and was widely copied by other makers (with significantly less embellishment and detail) for the next 60+ years. The map is based upon a manuscript map created by Olearius himself. When he returned to Moscow and presented the map to Czar Michael Romanov, the Czar was offered Olearius a position as court astronomer (which Olearius refused).

Olearius' mission as ambassador was to secure permission to use the Volga as a trade route to Persia, and so his accurate charting of the route was of vital importance. He observed that: "since in my opinion this river is one of the largest, longest and most remarkable in the world, I have explored it assiduously with the help of an expert Dutch navigator, Cornelius Clausen, and some Russian pilots; and reduced it to a map with the aid of compass, showing not only its course, its bends, angles and shores, but also its depths so as to indicate where one can navigate freely and safely, its sand banks, islands in it, and countries along its shores; and I measured the distances in miles and even in versts."