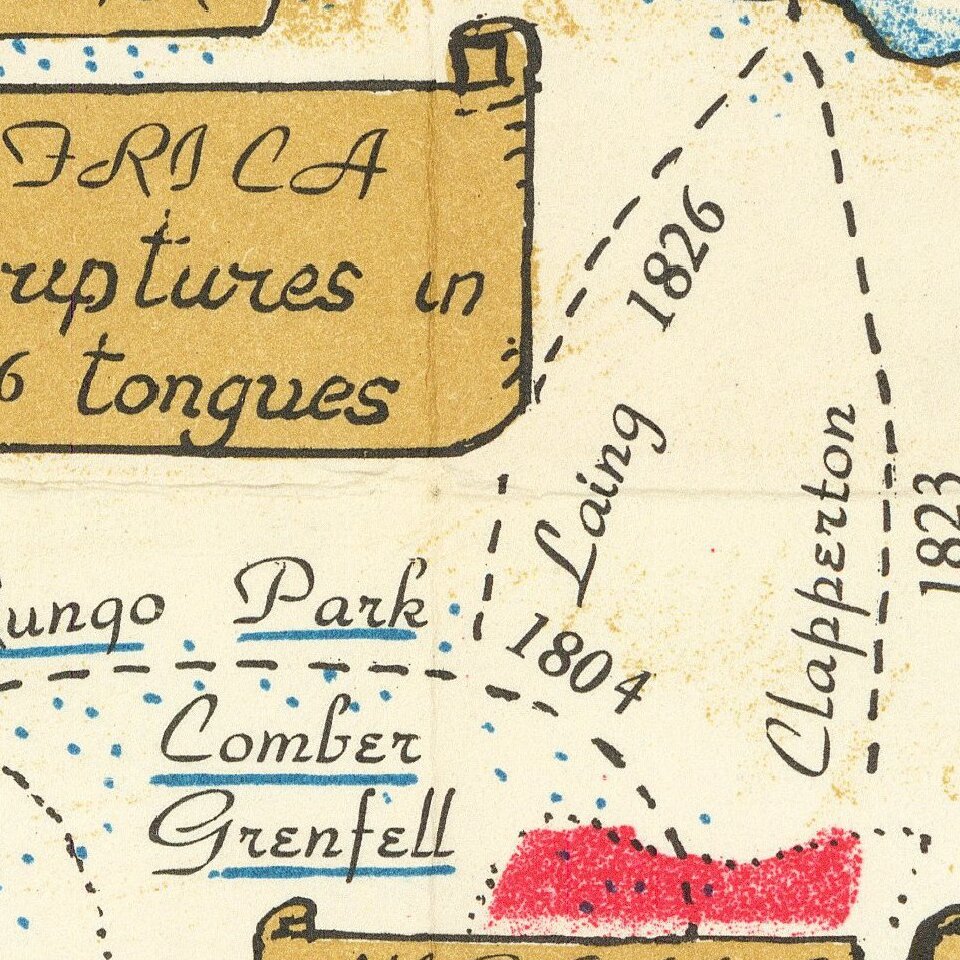 The BIWF espouses the following tenants: that the descendants of the Lost Ten Tribes of Israel migrated to Britain, that the British Royal family is descended from King David, and "the British nation plays an important part of God’s great plan for world order."

The map includes a strange melange of iconography and historical allusion, indicative of its creator's abstruse worldview. The sheet is dominated by a world map in which all Anglo-American territories are colored red (according to the key: "Lands under Israel's stewardship"). Additionally, the map is filled with portraits and tracks of the major Anglo-American missionaries (underlined in blue) and explorers, from the 2nd to 20th centuries. The areas colored with blue dots are said to be "Lands reached by British and American missions"). The areas covered with yellow hatching are "People aided in famine, pestilence and aggression".

In the upper-right corner is an inset map that purports to show how the Israelites made their way to the British Isles. The coats of arms of nations around the world fill the border, with prominence given to those of Great Britain and the United States, the first country to offer a branch of the BIWF outside of Britain.

The map reflects a racial chauvinism that was common at the time but here is more overt and confident than in any other mid-century map that we have seen. It depicts the Anglo-Saxon race as the God-chosen dominating force of the world - albeit a force for charity and the improvement of mankind. British Israelism has long been criticized for trying to imbue Anglo-American colonialism with religious justification.

Perhaps unsurprisingly, the map makes no mention of the modern-day state of Israel, which had just come into existence when it was published. While modern-day British Israelism - especially the strains followed in the United States - is often associated with the Christian Identity movement and overt antisemitism, many of the 19th-century founders of the movement were philosemites and early Zionists.

With its curious, problematic subject matter, dramatic visual style, and extreme rarity, this is one of the most unusual pictorial maps that we have handled.

No copy other than this example traced in OCLC, RBH, or general internet searches. This is among the rarest pictorial world maps that we have encountered.