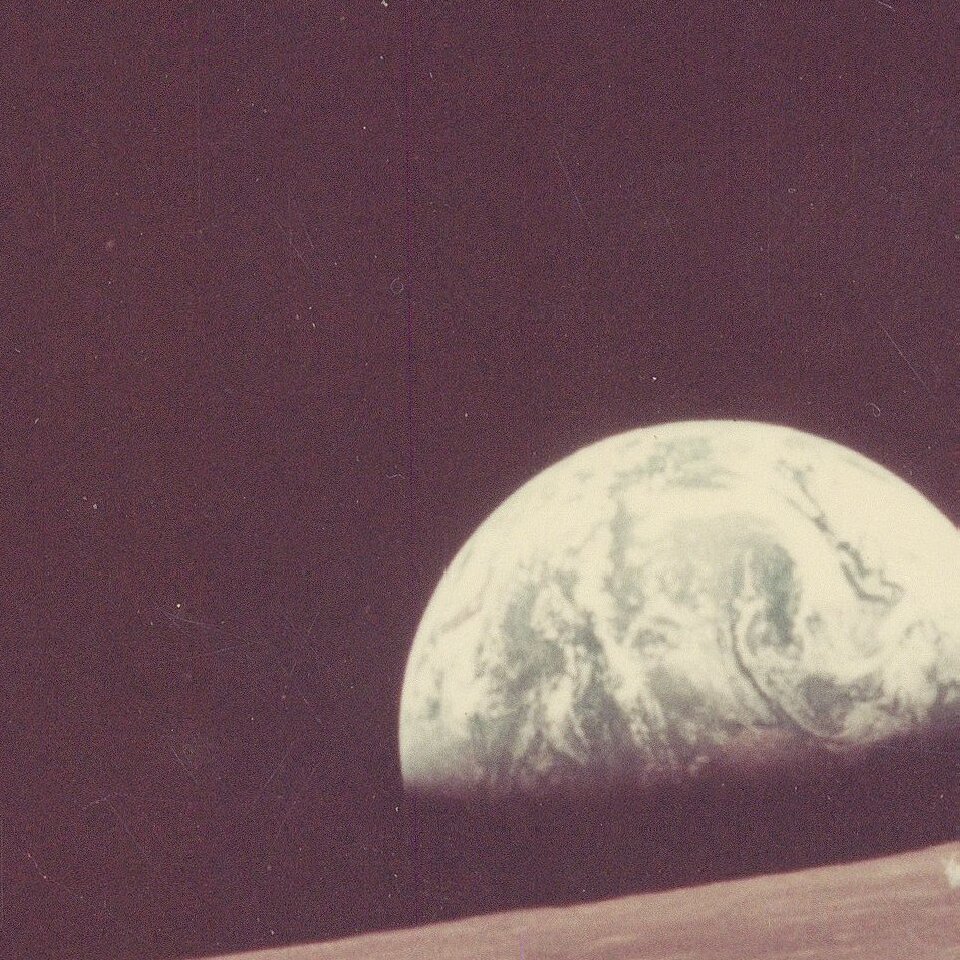 An iconic "earthrise" photo taken by the Apollo 10 Lunar Module, looking west in the direction of travel. The photo was taken in May of 1969, and this original NASA print was made in the same month. At the time the picture was taken, the Lunar Module was located above the lunar farside highlands at approximately 105 degrees east longitude.

This photo comes with the purple-ink press release for the photo that accompanied some 8x10s upon publication.

From the collection of a Houston-area NASA employee.

During all the early NASA missions, and in particular the Apollo Lunar missions, various vintage NASA photographs were taken. These include some exceptionally famous images, such as the first witnessed earthrise or Buzz Aldrin's footstep, some of which we have had in the past.

Most authentic vintage NASA photographs have the text "A KODAK PAPER" printed as a watermark on the verso. For this reason, we will show both the front and back of the photograph for any Kodak Paper photographs we sell.

The copies preserved vary widely in size. The 8 by 10 inch photos are the smallest, and authentic ones have red, black, or blue lettering in the upper left-hand corner referring to the mission, magazine, and frame number. As the size of the photos grow, they become rarer. Smaller format photographs were distributed to Boeing or NASA employees, while larger photographs were generally used by scientists or presented to foreign dignitaries.

These are some of the most evocative photos ever taken. Some of them portray a place only a dozen people have ever seen. The desolation and quiet that can be seen in these photos makes them such unique works. As scientists become closer to putting someone on Mars, and photos from other planets are published from sources like Curiosity or Voyager, the power of these early photographs only grows.

Apollo 10 was a May 1969 mission which acted as a practice run for the Apollo 11 mission. The mission was set up in the same way as Apollo 11 would be two months later, with a crew of two in a lunar module descending near to the surface of the moon while the main capsule remained in orbit. As such, it was the first fully manned Apollo mission to orbit the moon and the second manned orbit of the moon after Apollo 8. NASA refers to the mission as "an actual crewed landing, except [for] the landing."

The mission was manned by John Young, Thomas Stafford, and Gene Cernan, with the latter two commanding the lunar module while the former stayed in the command module. All three of them would return in later Apollo missions despite some issues with NASA management which highlighted the politics of the program.

NASA was worried that the astronauts would attempt to land on the moon, and, as such, they decided to short fuel the lunar module. The module had approximately ten percent less fuel than the Apollo 11 mission, just enough to complete the mission. Had they attempted to land, they would be left unable to return to the command module. The astronauts arrived within 8.4 kilometers of the moon and collected important information regarding the moon's gravitational field, allowing for calibration of the Apollo 11 landing system.

This mission was part of an ongoing collaboration between Charles Schultz and NASA. After trying to rebuild their public image in the wake of the Apollo 1 disaster, NASA chose Snoopy as their safety mascot. Apollo 10's lunar module was named Snoopy, and its command module Charlie Brown.