1785. Attack of the Rebels upon Fort Penobscot in the Province of New England in which their Fleet was totally destroyed and their Army dispersed the 14th Augst. 1779.

Attack of the Rebels upon Fort Penobscot in the Province of New England in which their Fleet was totally destroyed and their Army dispersed the 14th Augst. 1779. information: 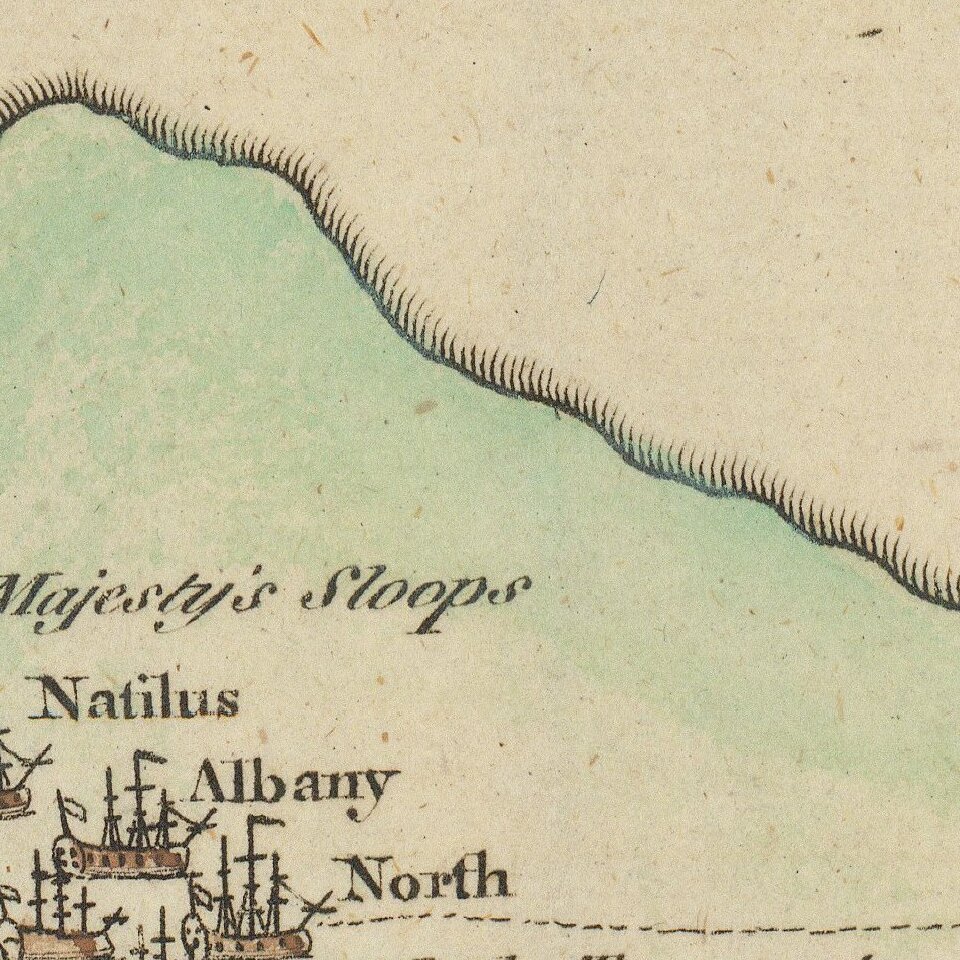 Interesting American battle plan, showing the action between the British and American Troops at the Battle of Penobscot, during the American Revolution.

In June-July 1779, a British expeditionary force of 3 ships and 700 men out of Halifax established Fort George at the entrance to the Penobscot River on the location of present-day Castine, in order to protect access to the valuable timber resources of Maine and establish a base from which to harass the Americans in northern New England. The Americans countered with a fleet of 40 ships and 2500 men from Boston, which was assembled by the Massachusetts government rather than the Continental Congress.

The American's goal was to reclaim control of what is now mid-coast Maine from the British who had seized it a month earlier and renamed it New Ireland. It was the largest American naval expedition of the war. The fighting took place both on land and at sea in and around the mouth of the Penobscot and Majabigwaduce Rivers at what is today Castine, Maine, over a period of three weeks in July and August of 1779.

The Americans in fact met with initial success, forcing the British to reinforce with additional ships from New York. The Americans retreated up the Penobscot in disarray, where they ultimately were forced to scuttle those ships not captured by the British. According to a note on the plan, " The Rebels after destroying their shipping landed on [the southwest] side of the River and made the Best of their Way to Boston a distance of several hundred miles thro' Woods, Wilds, &c. Where many of them Perished."

The map provides an interesting account of the battle, but a very inaccurate location for Fort George, which is shown on an isthmus at the West side of the entrance to the Penobscot River, when in fact it was located farther out in the Bay to the East of the River.

Paul Revere at the Battle of Penobscot Bay

Paul Revere commanded a force of 100 men, comprising the artillery units for the Penobscot expedition, and was responsible for organizing the artillery train. He participated in the taking of Bank's Island, from which artillery batteries could reach the British ships anchored before Fort George. He next oversaw the transport of the guns from Bank's Island to a new position on the heights of the Bagaduce Peninsula that commanded the fort.

Although Revere was in favor of storming the fort, Brigadier General Solomon Lovell opted for a siege instead. After further disagreements on how to proceed between Lovell and fleet commander Dudley Saltonstall, Lovell decided to return to the transports on August 12, a decision supported by Revere.

Late the next day British sails were spotted. A mad scramble ensued, and on the 14th the fleet was in retreat heading up the Penobscot River. Revere and his men were put ashore with their stores, and their transports destroyed. At one point Brigadier General Peleg Wadsworth ordered Revere to send his barge in an attempt to recover a ship drifting toward the enemy position. Revere at first resisted, but eventually complied, and Wadsworth told him to expect formal charges over the affair.

The incident separated Revere from his men. Moving overland, he eventually managed to regroup most of his troops, and returned to Boston on August 26. A variety of charges were made against Revere, some of which were exaggerated assignments of blame made by enemies he had made in his command at Castle William. The initial hearings on the matter in September 1779 were inconclusive, but he was asked to resign his post. He repeatedly sought a full court-martial to clear his name, but it was not until February 1782 that a court martial heard the issue, exonerating him.