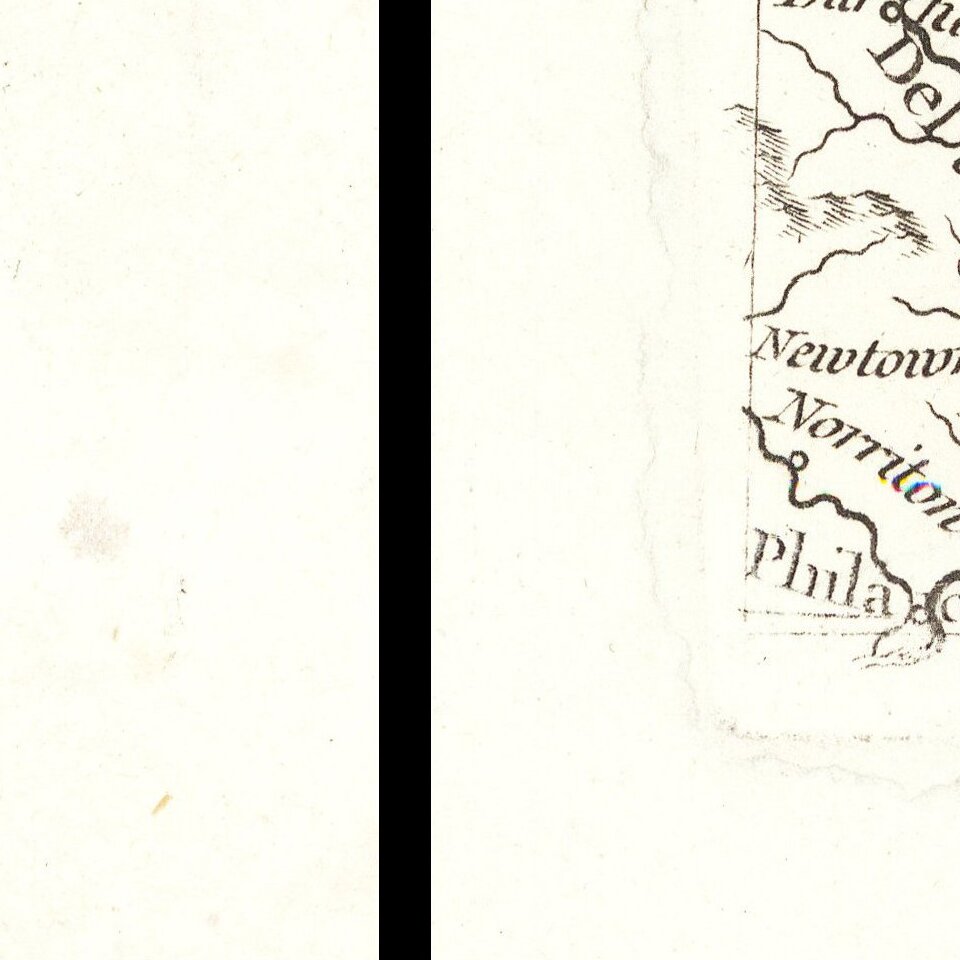 The map extends from James Bay to Florida and as far west as the Mississippi River. Portions of the map are drawn from John Mitchell's seminal map of North America which appeared earlier in the same year.

D'Anville's map shifts the emphasis of Mitchell's work to the French dominated regions, omitting Mitchell's legend, and Mitchell's references to English factories in the disputed trans-Allegheny area. Instead, D'Anville draws on French sources for additional details not shown on Mitchell's map.

The map provides exceptional early detail along the lower portion of the Missouri (alternately the "Pekitanoui") and the upper waters of the Mississippi. The Keweenaw peninsula is named as Kiaonan, and Isle Royale is called I. Minong. The area is filled with scores of Indian tribes and villages named and located.

To illustrate the cartography of the second half of the eighteenth century, a d'Anville map is essential. He dominated not only French but all contemporary geographers. He was one of the foremost to leave blank spaces in his maps where knowledge was insufficient ... His representation of the Great Lakes is superior to that of his contemporary, John Mitchell.

D'Anville's map would become the basis for numerous future mappings, most notably by Jeffereys and Sayer & Bennett.

The present example includes the rare fourth sheet comprising the inset of the St. Lawrence River, which is often found lacking due to its irregular shape.

Jean-Baptiste Bourguignon d’Anville (1697-1782) was one of the foremost French geographers of the eighteenth century. He carried out rigorous research in order to create his maps, which greatly developed the technical proficiency of mapmaking during his lifetime. His style was also simpler and less ornate than that of many of his predecessors. It was widely adopted by his contemporaries and successors.

The son of a tailor, d’Anville showed cartographic prowess from a young age; his first map, of Ancient Greece, was published when he was only fifteen years old. By twenty-two, he was appointed as one of the King’s géographes ordinaire de roi. He tutored the young Louis XV while in the service to the Crown. However, royal appointment did not pay all the bills, so d’Anville also did some work for the Portuguese Crown from 1724. For example, he helped to fill out Dom João V’s library with geographical works and made maps showing Portugal’s African colonies.

D’Anville disapproved of merely copying features from other maps, preferring instead to return to the texts upon which those maps were based to make his own depictions. This led him to embrace blank spaces for unknown areas and to reject names which were not supported by other sources. He also amassed a large personal map library and created a network of sources that included Jesuits in China and savants in Brazil. D’Anville’s historical approach to cartography resulted in magnificently detailed, yet modern and academic, maps. For example, his 1743 map of Italy improved upon all previous maps and included a memoir laying out his research and innovations. The geographer also specialized in ancient historical geography.

In 1773, d’Anville was named premier géographe de roi. In 1780, he ceded his considerable library to the Ministry of Foreign Affairs to be used for as a reference library for diplomats. D’Anville is best known for several maps, including his map of China, first published in 1735, and then included with Du Halde’s history of that country (the Hague, 1737). His map of Africa (1749) was used well into the nineteenth century.