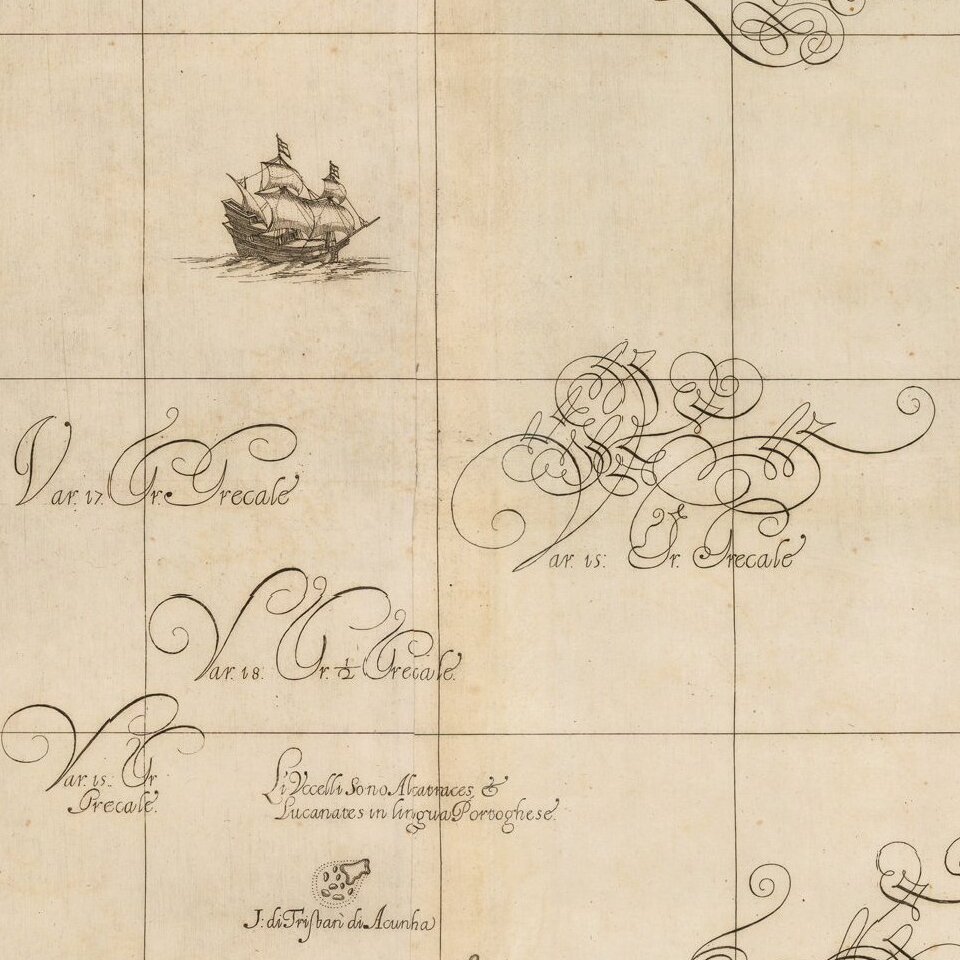 Fine example of Robert Dudley's chart of the coast of southern Africa, the earliest obtainable sea chart of the general region.

The map covers the area south of the entrance to the Congo River, around the Cape of Good Hope, to Isle Monfin (Mafia Island), off the coast of present-day Tanzania. An inset map depicts the coast of east Africa to Djibouti. Madagascar is fully depicted. Almost no detail is rendered on the interior, this is the case with Dudley's maps, and it is particularly suited to Africa, where, at the time, little about the interior was known with any certainty by Europeans. Natal, Mosabiche, and Angola are named as regions.

At the time this map was published, the Dutch had not yet established themselves at the Cape -- this would come several years later in 1652.

Dudley (1573-1649) was a fascinating figure of Elizabethan England. He was an adventurer, explorer, naval engineer, cartographer, and scientist; a true polymath. Dudley was the illegitimate son of the Earl of Leicester, the favorite of Elizabeth I and brother-in-law to Thomas Cavendish. He cut his teeth in the enterprising and exploratory milieu of late-16th century England. He was no stranger to court politics, and his various relationships, marriages, and attempt to claim legitimacy provided closely watched drama in London.

Dudley was forced to leave England in July 1605 with his cousin (and lover) Elizabeth Southwell. He made his way to the Continent, eventually settling in Florence, where he became an advisor to Ferdinand I, the Duke of Tuscany.

Dudley was constantly backing or participating in exotic adventures. In 1594 he sailed with Sir Francis Drake to Guiana and Trinidad, in search of El Dorado. Two years later he received a knighthood for his part in the Earl of Essex's raid on Cadiz. He backed Benjamin Wood's 1596 expedition to Southeast Asia, which ended in a shipwreck on the Burmese coast. Later, he was responsible for one of the only Italian attempts to colonize the New World, when in 1608 he convinced the Duke of Tuscany to send a privateer to Guiana and the northern coast of Brazil.

This map comes from Sir Robert Dudley's magnum opus, Dell'Arcano del Mare. His work was one of the most important 17th century maritime books, with the sixth part comprising a sea atlas of the entire world. It is noteworthy for being the first such in print, the first of any kind made by an Englishman, and the first to use Mercator's projection. The work was published in Florence in 1645-46. Antonio Francesco Lucini engraved the maps and stated that the project took him 12 years and over 5,000 pounds of copper to produce the plates. Dudley's maps are characterized by a singular visual style, which was not emulated by any other 17th century chart makers. The printed calligraphy is also exceptional.

Parry, Printing and the Mind of Man:

"In the genre of sea charts it is Sir Robert Dudley (1573-1649) who made the greatest impression among the English cartographers of the seventeenth century, particularly in his charting of the East Indian archipelago . . . the first atlas to contain detailed charts of the whole East Indian and Philippine archipelagoes."

Robert Dudley (1574-1649) is one of the most intriguing historical figures of the late Elizabethan period. His father, also named Robert and the first Earl of Leicester, was a favorite of Elizabeth I’s. The Earl was a supporter of exploratory expeditions and backed Francis Drake on his circumnavigation (1577-1580) and Martin Frobisher on his 1576 voyage to find the Northwest Passage. Robert the Younger was the illegitimate son of the Earl and Lady Douglas Sheffield, born in 1574.

Dudley attended Christ Church, Oxford, starting in 1587. A year later, at only 14, Dudley stood by his father at Tilbury, witnessing Queen Elizabeth’s famous speech in preparation for resisting the Spanish Armada. His father died in September that year, giving Robert a sizeable inheritance. In 1594, Dudley led an expedition to Guiana, where some of his men explored up the Orinoco River in search of gold.  In 1596, Dudley joined an expedition against Cadiz.

All these experiences left Dudley in favor, and he thought the time was right to establish his legitimacy. In court proceedings from 1603 to 1605, Dudley fought for his right to his father’s titles, but the Star Chamber ruled against him and he had to left England for self-exile in Italy. He settled in Florence, where he designed and built ships and advised Ferdinand I, Grand Duke of Tuscany.

While in Florence, Dudley also compiled all his sailing notes and thoughts on navigation (and those of others including, purportedly, Francis Drake, with whom he sailed in 1596, and Thomas Cavendish, to whom he was related by marriage) into a work called Arcano del Mare, or The Secret of the Sea. He finished the manuscript of the work in 1636 and published the work himself, at age 73, a decade later in 1646-7.

Dudley’s Arcano del Mare (Mystery of the Sea) is one of the most important atlases ever produced and one of the most complex. It is the first sea-atlas of the whole world; the first with all the charts constructed using Mercator's new projection, as corrected by Edward Wright; the first to give magnetic declination; the first to give prevailing winds and currents; the first to expound the advantages of Great Circle Sailing; and the first sea-atlas to be compiled by an Englishman, albeit abroad in Italy. Dudley broke completely with the contemporary style of charts. He showed lines of latitude and longitude and omitted all compass lines. In doing so, his purpose was more intellectual than practical: techniques for determining longitude at sea were not refined until more than two centuries later. The maps are by English and other pilots and it is generally accepted that the work was both scientific and accurate for the time. Dudley used the original charts of Henry Hudson, and for the Pacific Coast of America used Cavendish's observations. When the first edition appeared, Dudley was seventy-three years old. The Arcano del Mare was a monumental and totally original task, the charts, representations of instruments and diagrams all engraved on huge quantities of copper over many years with an exactitude incorporating the minutest detail and printed on the best possible paper.

Antonio Francesco Lucini, the engraver, was born in Florence c. 1610. Before being employed by Sir Robert Dudley, he had already published engraved views of Florence and scenes of the Turkish Wars. Lucini put the stamp of his personality on the finished work as well as did the author; the delicacy and strength of the engraving, the embellishments of the lettering alla cancellaresca, make it a true example of Italian Baroque art. In a printed introductory leaf found in one copy in the British Library, Lucini states that he worked on the plates in seclusion for twelve years in an obscure Tuscan village, using up to no less than 5,000 lbs (2,268 kg) of copper. According to the engraver, the Arcano del Mare took forty years to prepare and twelve to execute.