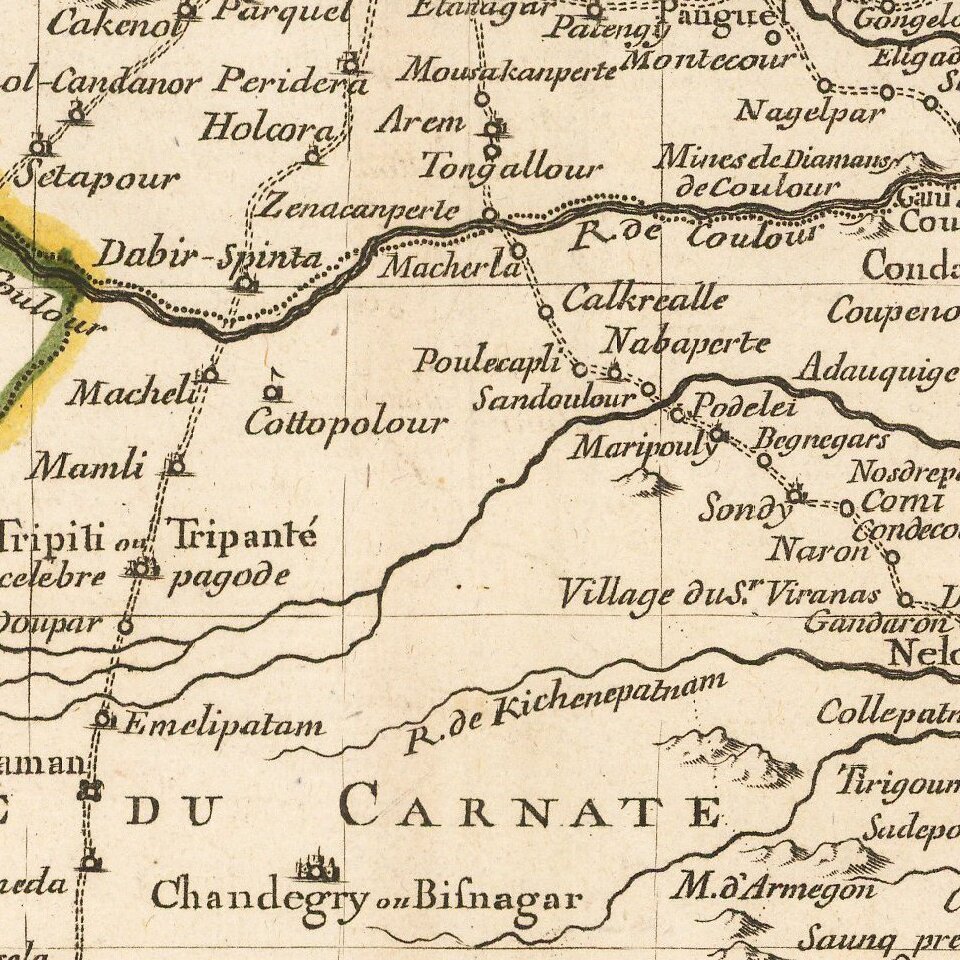 Finely engraved map of the southern part of India, first issued in 1723 by acclaimed French mapmaker Guillaume De L’Isle. It focuses on trade routes within India, as well as the Coromandel and Malabar Coasts.

This edition of the map was published in 1780 by De L’Isle son-in-law, Philippe Buache, also a renowned mapmaker, and Jean-Claude Dezauche. The men worked together to continue De L’Isle’s business after this death, with Dezauche acquiring De L’Isle’s plates in 1780 from Buache’s nephew.

The map shows the Indian subcontinent, from Gujarat and Bengal south. The northern tip of Ceylon, or Sri Lanka, peeks out of the southern border. To the west, the Maldives dot the waters off the Malabar coast.

Rivers, including the mighty Ganges, are indicated, as our mountain ranges. Political boundaries are outlined, with settlements marked by circles or small buildings. Trade routes snake across the terrain, indicated by double dashed lines. They radiate from areas rich in resources, such as the diamond mine of Raolconda [part of the Golconda diamond mines], or from cities at the crossroads of commerce, such as Amandabat [Ahmedabad].

A title cartouche in the lower right corner includes a brief dedication to the King of France, who in 1723 was Louis XV. Two compass roses flank either side of the subcontinent, complete with notes about magnetic variation. North of the Maldives, five scale bars allow the reader to calculate in a variety of distances.

While the map includes much of southern India, the title cartouche emphasizes what was of particular interest to Europeans, the coastlines. The Coromandel Coast refers to the southeast coast of India. Always a center of trade, the Europeans arrived early in the sixteenth century with the Portuguese. Goods that were frequently traded on the coast included diamonds, Chinese lacquer goods, and textiles.

By 1530, they had three commercial settlements, Nagapattinam [here Negapatan], Sao Tome, and Pulicat[e]. In the seventeenth and eighteenth centuries, the Portuguese had lost their powerful status and had to fight competition from the Danish, Dutch, English and French. As labeled here, each empire had trade cities out of which they operated. Negapatan and Pulicate had passed to the Dutch, while the French controlled Pondicherry. Madras, or Fort St. George, was under the control of the English.

On the southwest coast of India is the Malabar Coast, also a hub of Europeans trading with India and the rest of Asia. Since 3,000 BC, this area has been a major trading zone, with goods passing to Mesopotamia, Egypt, Greece, and Rome. The coast is also distinctly cosmopolitan, thanks to its location and importance to commerce, with some of the first and largest populations of Jews, Syrian Christians, and Muslims on the subcontinent.

In the fifteenth century, Zheng He led his treasure fleet to the Malabar Coast. Vasco de Gama, a Portuguese navigator, arrived in 1498, beginning the important maritime trade between Europe and Southeast Asia. The coast was important as a market for spices from farther east, as well as other goods. By the eighteenth century, the Dutch East India Company were the major European presence on the Malabar Coast, along with the English, who controlled Calicut [Kozhikode].

This map, by the eighteenth-century’s premier European mapmaker, emphasizes the European footholds in the Indian subcontinent and underlines India’s vital place in early modern world commerce.