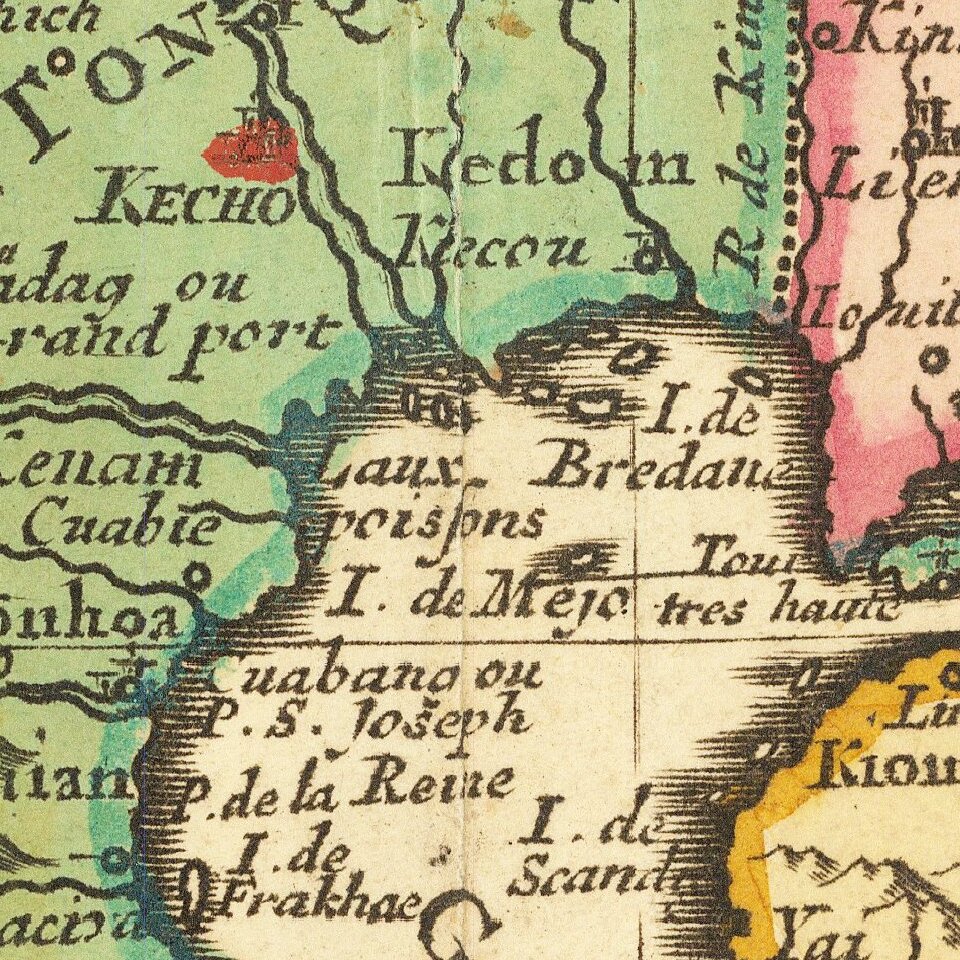 Notable example of this meticulously-drawn map of East Asia and the Indian subcontinent published in Amsterdam.

The map is based upon the earlier work of the famed geographer Guillaume De L'Isle. It covers much of Asia, from China and Japan, south to New Guinea and the Moluccas, west through Malaysia and Indonesia to what is today Vietnam and Thailand, and India.

Dotted lines mark political boundaries. The map is thickly detailed with settlements, geographic features, and ethnographic notes. There is a simple title cartouche in the top center, with a quadruple scale bar in the upper right corner.

While most of the outlines of the continent appear familiar to the modern eye, the landmass north of Japan may prove surprising. Here, the “Terre de Yeco ou d’Eso.” Yeco is a reference to Jesso, a feature included on many seventeenth and eighteenth-century maps. Historically, Eso (Jesso, Yedso, Yesso) refers to the island of Hokkaido. It varies on maps from a small island to a near-continent sized mass that stretched from Asia to Alaska.

The thoroughness of the information included here, and its density, is characteristic of Guillaume De L’Isle, who originally drafted the map. Covens and Mortier, a powerful publishing partnership based in Amsterdam, published French maps for the Dutch market.

Guillaume De L'Isle (1675-1726) is probably the greatest figure in French cartography. Having learned geography from his father Claude, by the age of eight or nine he could draw maps to demonstrate ancient history. He studied mathematics and astronomy under Cassini, from whom he received a superb grounding in scientific cartography—the hallmark of his work. His first atlas was published in ca. 1700. In 1702 he was elected a member of the Academie Royale des Sciences and in 1718 he became Premier Geographe du Roi.

De L’Isle also played a prominent part in the recalculation of latitude and longitude, based on the most recent celestial observations. His major contribution was in collating and incorporating this latitudinal and longitudinal information in his maps, setting a new standard of accuracy, quickly followed by many of his contemporaries. Guillaume De L’Isle’s work was widely copied by other mapmakers of the period, including Chatelain, Covens & Mortier (as seen here), and Albrizzi.

Many of the political units shown on this map, like Japan and China, are still active and similarly named today. Others, like Siam and the Mughal Empire, are less recognizable. What is modern Thailand is labeled as Siam. Siam comes from the Sanskrit word “syam,” which the Portuguese adopted as a name for the region.

The extent of their territory varied over time, as shown here with Siam and Haut-Siam. During the eighteenth-century, the polity was on the rise and expanding. By the 1780s, the Chakri dynasty ruled all of Siam from Bangkok, their capital, in addition to part of the Malay peninsula, Laos, and Cambodia.

However, in the nineteenth and twentieth centuries Siam lost land to the French, who colonized much of Cochinchina. In 1932, the monarchy was toppled with a coup; it survived, but no longer ran the country. The new leader, Phibun, changed the country’s name to Thailand in 1938.

Another political entity that is unfamiliar to the modern eye is the Mughal Empire, in the north of the Indian subcontinent. By the time this map was published, the Mughals controlled not only the area shown here, but much of the southern peninsula as well.

The Mughal Empire began when Babur (r. 1526-1530), originally from Central Asia, established himself in Kabul, Afghanistan and marched south into India via the Khyber Pass. His descendants consolidated power and fought off rivals. Particularly under the rule of Akbar (r. 1556-1605), the Mughal Empire developed an imperial structure characterized by tolerance of religious differences and a competent administrative elite.

Later in the seventeenth century, the Mughal Empire developed not only as a center of arts and culture—the Taj Mahal was built during this time—but as a political and economic power house. By 1707, under the controversial ruler Aurangzeb (r. 1658-1707), the Mughal Empire reached its largest extent, encompassing much of the Indian subcontinent.

By the time this map was published, however, the empire was beginning to decline. Many of the areas that had been added by Aurangzeb were in open revolt and the dynastic line was in chaos. In 1719, four separate emperors ruled. The Mughal Empire began to lose land and influence, particularly in the face of Maratha opposition and the arrival of the British East India Company.