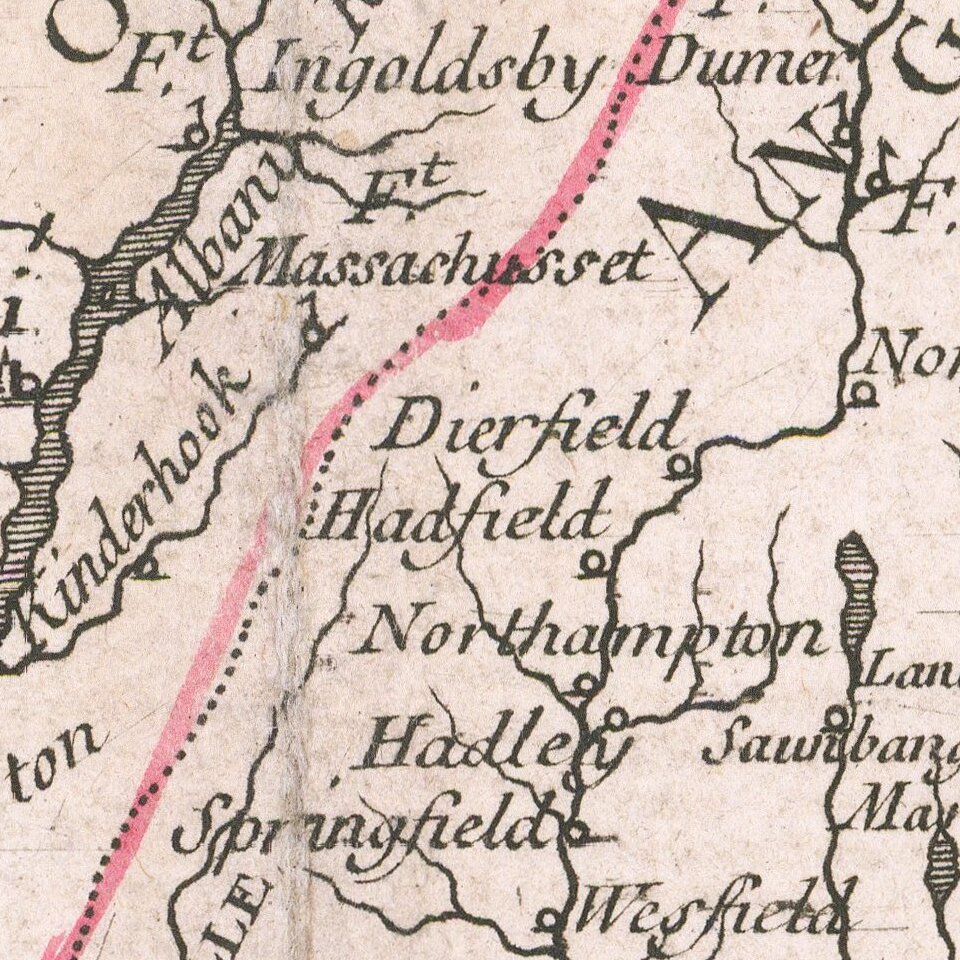 Fine example of the first edition of Longchamps’ map of the colonies—Spanish, French, and British—in North America east of the Mississippi River, with a large inset of the Carolinas, Georgia, Florida and the Gulf Coast. This example lacks the ornamentation around the cartouche, making it a possible proof state.

This map may have been intended as a direct response to the Jean Palairet's 1755 map advocating the English case for control of the lands in the Ohio River Valley, which would become the flashpoint for the Seven Years’ War. Palairet’s map suggestively includes extensions of the north-south boundaries of the British colonies farther west. Here, Longchamps has contained the British colonies without the bounds of their current settlements, leaving French control over the western lands.

Contemporary readers, especially those of a French persuasion, would have been eager to pore over this map, as it offered a visual interpretation of the state of affairs as two global powers embarked on what is considered by many historians as the first world war. Although the European theater of conflict centered on the possession of Silesia, which Prussia had seized from the Austrian Hapsburgs in the War of Austrian Succession (1740-48), the more famous settings of the war were in India and North America.

These were both regions where France and Britain wished to expand their global empires, and where they ran up against each other in their bids for land and trading access. Thus, although commonly called the Seven Years’ War, or in North America the French & Indian War, the struggle lasted at least nine years, from 1754 to 1763.

In North America, the site of primary contention was the Ohio River Valley. British colonists wished to expand west, while the French wanted to maintain their control over the Ohio River, a corridor of access between New France and Louisiana, and protect their preferred trading status with local indigenous groups. In 1753, the French began to construct a series of forts in the area, some of which are marked here with a circle topped by a tiny flag.

Twenty-one-year-old George Washington, then a Lieutenant Colonel in the Virginia militia, was dispatched to deliver a letter to the French at Fort Le Boeuf, which is included on this map (without its full name, a fort near the southern shore of northeastern Lake Erie). Washington reported to his superiors that the French were not willing to leave the Ohio Country, and he was then ordered to raise a militia regiment where the Ohio River joins the Allegheny and the Monongahela Rivers, the site of present-day Pittsburgh. While he was en route to the site, a smaller unit of colonists already there were attacked by the French, who took over their nascent fortification and renamed it Fort Duquesne (which is on this map as Ft. du Quêne).

Washington met Captain Trent, the leader of the defeated force, while traveling toward the frontier zone. Together with his Indian ally, Tanacharison, Washington attacked a French encampment, killing several, including their commander, Jumonville. Washington then went on the defensive, consolidating his men at the quickly-assembled Fort Necessity. Outnumbered, Washington was unable to fend off the French attack on July 3, 1754; he surrendered, the only time he did so in his career as a soldier.

These skirmishes began the war in North America. The following year, the British sent a large expedition of soldiers to dislodge the French from the Ohio Country. After years of fighting on land and at sea in North America, Europe, the Caribbean, Africa, and India, the Treaty of Paris ended the violence in 1763. Over one million people had been killed worldwide. France was forced to fall back globally, leaving Canada to the British, Louisiana to the Spanish, as well as losing territory in India, Africa, and the Mediterranean. This map shows the beginning of this important conflict, as the powers were consolidating their manpower and knowledge for the war ahead.