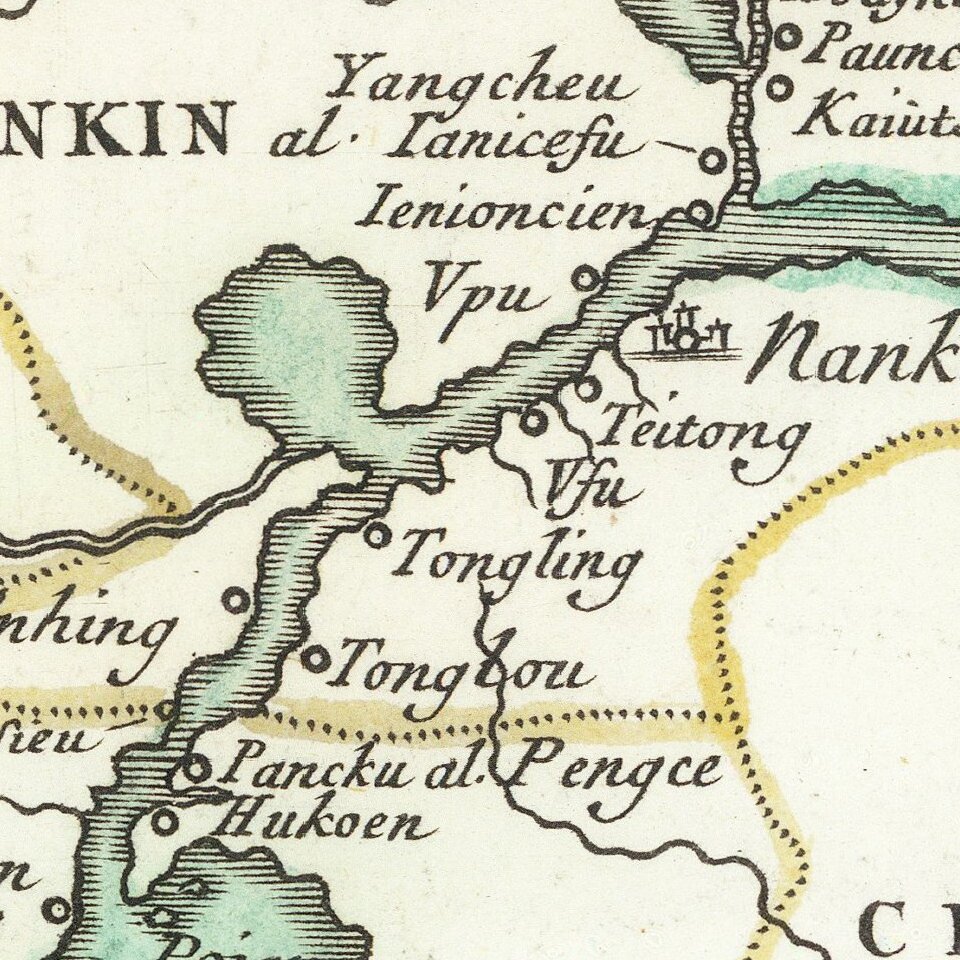 Scarce map of China, extending from Beijing, Korea and the Great Wall of China in the north to Canton, Macao and Formosa.

The map illustrates the Dutch expedition to China led by Johan Nieuhof in 1655-57.

In the first half of the 17th century, the Dutch East India Company (VOC), tried to break the Portuguese monopoly over the China Trade. When they did not succeed, they sent six embassies to Peking between 1655 and 1685, hoping to convince the Qing emperor to open up trade relations on the southern coast, in favor of the VOC, although they ultimately failed.

Johan Nieuhof was appointed to the position of steward on one of these embassies by Joan Maetsuycker, which traveled from Canton to Peking between 1655 and 1658. They were the second embassy to try and gain the emperor's favor. The first was led by Zacharias Wagenaer. Nieuhof's duties as part of the embassy primarily consisted of ceremonial matters as well as securing lodgings. He was, however, specifically appointed to illustrate any and all of the cities, palaces, temples, rivers and other noteworthy buildings in their true-to-nature form.

On March 17, 1656, after months of negotiations and discussions of tributes to be paid to the Chinese emperor and viceroy, the embassy left Canton by barge, to travel towards Peking. The embassy arrived at the emperor's court in Peking on July 18, the same year. They hired the Jesuit scholar, Johann Adam Schall von Bell, to be their translator, who warned them of the possible dangers and required ceremonies to approach the emperor. On September 24, the embassy was received by the Shunzhi Emperor. As dictated by their translator, the party performed the traditional kowtow, as failing to do so would most likely result in immediate refusal by the emperor. As a result, the emperor allowed Dutch embassies to visit the court once every eight years, in parties consisting of no more than 100 men. Any trading rights were not discussed nor granted at this point. On October 16, the embassy was asked to leave the city of Peking within two hours. Their return trip took three months; putting the entire length of the embassy at 20 months and 6 days.

The reports from these embassies and the reports of the Jesuits formed the only reliable source of information on China available in Western Europe. As mentioned, being the purser of the VOC embassy to Peking, Johan Nieuhof in 1655, had special instructions to observe all "farms, towns, palaces, rivers, ... [and other] buildings" that he might pass by, drawing them "in straight form and figure", as well as remains of the historical victory of the "Tartars" (Manchus) that brought an end to the reign of the Ming dynasty.

Pierre Duval (1618-1683) was a French geographer, cartographer, and publisher who worked in Abbeville and Paris during the seventeenth century. He was born in the former city, in northeast France, before moving to Paris. Duval was the nephew of the famous cartographer Nicolas Sanson, from whom he learned the mapmaker's art and skills. Both men worked at the royal court, having followed the royal request for artists to relocate to Paris. In addition to numerous maps and atlases, Du Val's opus also includes geography texts. He held the title of geographe ordinaire du roi from 1650 and died in 1683, when his wife and daughters took over his business.