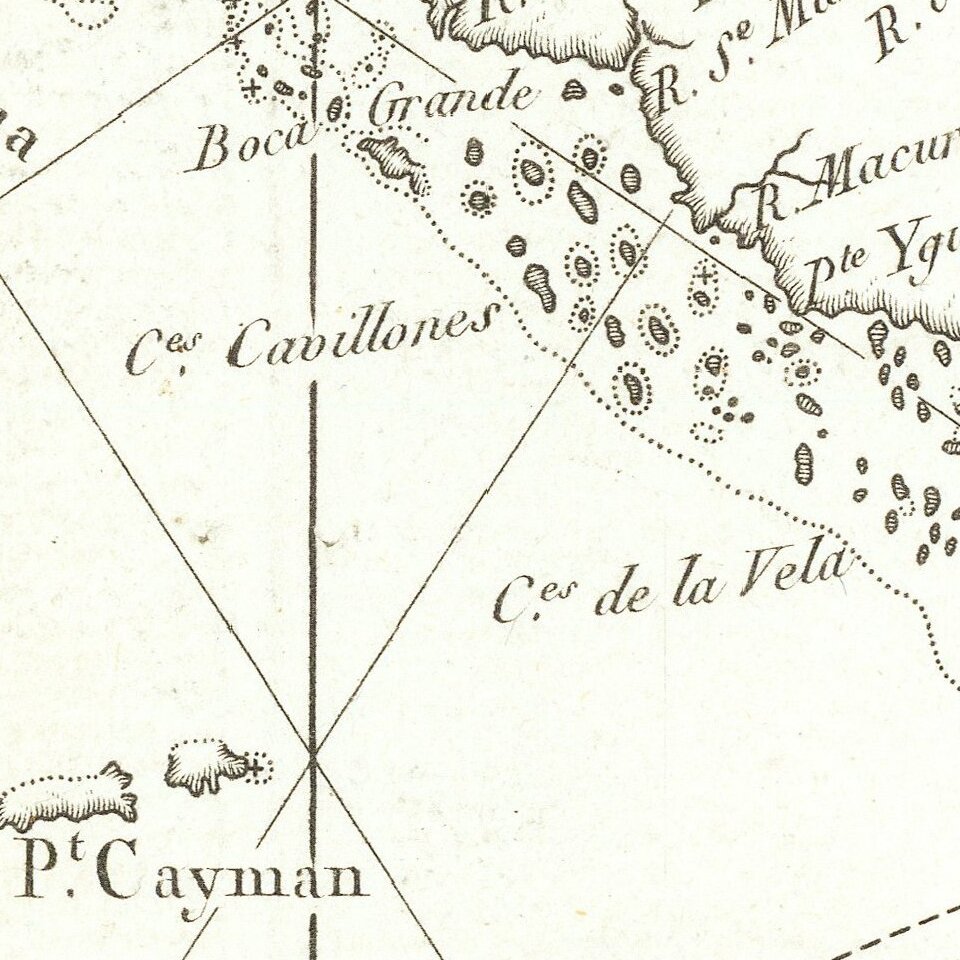 Fine and intricately-drawn French sea chart of the Spanish Main and the Caribbean, published in Paris in 1807.

Drawn for the benefit of French vessels, as the cartouche in the upper right explains, the chart was issued by the French hydrographic body, the Dépôt de la Marine. It was engraved by Besançon and engraved by E. Collin; although there are few biographical details about these Dépôt employees, they worked together on several charts.

As an aid to maritime navigation, there are no details inland beyond a few riverine systems. There are also no political boundaries, which is an interesting choice considering the frequency with which many of the islands and territories shifted imperial hands. There are, however, many depth soundings near coastlines, with sand banks and other obstructions are clearly marked.

The hydrography is drawn in immense detail, reflecting the three centuries of European sailing in the waters of the Caribbean. Especially noticeable is Lake Maracaibo, a partially brackish inlet of the Caribbean in what is today Venezuela. The waters in the south of the lake are fresh, fed by inland rivers. Also shown is the Orinoco Delta; while it looks fixed here, the waterways of the Delta are actually in constant flux, perpetually flooding the surrounding swamp forests.

The chart presents a dynamic image of Florida, with a portion of the western coastline north of present-day Tampa still completely uncharted. Florida had passed to British control from Spanish at the close of the Seven Years’ War. They split the colony into West and East Florida, divisions that Spain maintained when they regained the land in 1783, at the close of the American Revolution. They were still in control of the area when this chart was made, and remained so until 1821.

Dated 1807, this map shows the French Caribbean in a period of transition, at the end of the First French Colonial Empire. The French had colonies in the Antilles, where they still maintain some holdings, and on Saint Domingue; indeed, the latter was the their most lucrative colony. All of the colonies were dominated by plantation agriculture, especially sugar cultivation, and forcibly worked by enslaved people of African descent.

After the Treaty of Paris of 1763, France lost its North American colonies. Napoleon Bonaparte regained the Louisiana Territory from Spain in 1800. Napoleon had intended to re-establish the French North American Empire, but the high costs of his continuing wars led him to decide to sell the land instead. This transaction is now called the Louisiana Purchase, doubling the size of the United States and leaving France in 1803 with only its Caribbean holdings in the Western Hemisphere.

The French first established themselves in the region on the South American coastline in what is today French Guiana in 1624. A year later, they founded a colony on St. Kitts, which was shared with the British until 1713. Meanwhile, the Compagnie des Îles de l’Amérique started plantation colonies on Guadeloupe and Martinique in 1635; Saint Lucia followed in 1643, and Grenada in 1649. Dominica was settled from 1690. Guadeloupe and Martinique, along with other French Caribbean holdings like Dominica, Saint Lucia, and Grenada, were taken by the British during the Seven Years’ War. However, Guadeloupe and Martinique were ceded back to France as a result of the Treaty of Paris. Saint Lucia would also be returned at the end of the American Revolution.

By far the most valuable Caribbean colony was Saint Domingue, on the western half of the island of Hispaniola. The Spanish and French shared the island from 1664, when the French founded their claim, and 1795, when Spain gave France their half of Hispaniola due to the wars stemming from the French Revolution.

When this chart was made, the French Colonial Empire was being rocked by a rebellion in Saint Domingue. In 1791, a massive slave revolt shook French dominance. The rebels were led by Toussaint L’Ouverture, but he was captured by the French in 1801. Under Jean-Jacques Dessalines, the revolution continued and the Republic of Haiti was declared in 1804—the world’s first Black republic. However, France was loathe to recognize their former colony as an independent state; here, the island still appears as if it were entirely a colony of France. France would only recognize Haiti in 1825.

Today, France still has several Caribbean territories under its sovereignty. They are the overseas departments of Guadeloupe, Martinique, and the overseas collectivities of Saint Martin and Saint Barthélemy.