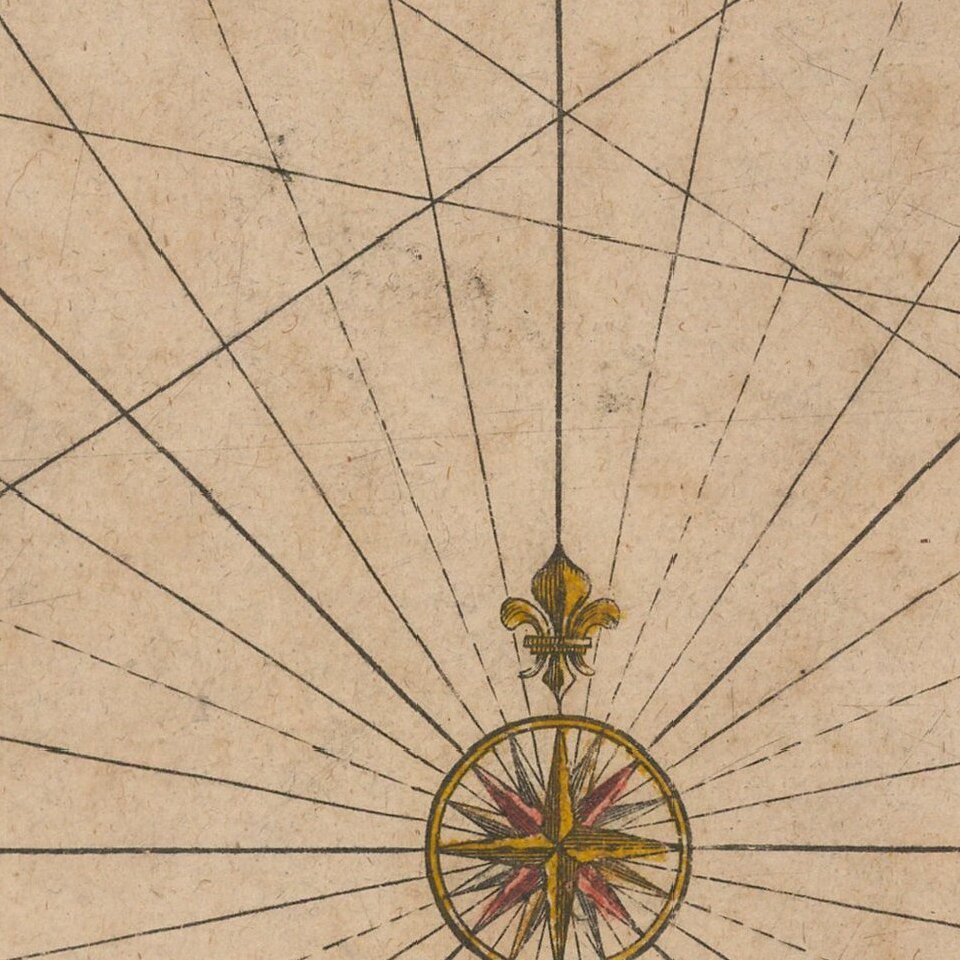 Old color example of this important chart of the Indian Ocean, illustrating the route of the Jesuit priest Guy Tachcard in 1697.

The present example bears the bookplate (bottom right) of the Prussian Royal Academy of Sciences ( Königlich-Preußische Academie der Wissenschaften), which had been formed on July 11, 1700.

The map extends to show the Maldives, Ceylon (Sri Lanka), much of India, the flood plains of the Ganges River, Burma, and continuing around to Malacca on the Malaysian Peninsula. Shows most of Sumatra and names the Aceh region. Three insets detail the vicinity of Goa, the Port of Negrailles, and the Port of Mergui in Burma.

Guy Tachard (1651-1712), was a Jesuit missionary and mathematician, who made 2 embassy's to the Kingdom of Siam for King Louis XIV. Taachard was first sent to Siam in 1685 with five other Jesuits under Superior Jean de Fontaney, on an embassy to Siam led by Chevalier de Chaumont and François-Timoléon de Choisy, and accompanied by Claude de Forbin. The objective of the Jesuits was to complete a scientific expedition to the Indies and China. Enticed by the Greek Constantine Phaulkon, he returned to France to suggest an alliance with the king of Siam Narai to Louis XIV.

The two ships of the embassy returned to France with a Siamese embassy, led by the Siamese ambassador Kosa Pan, who was bringing a proposal for an eternal alliance between France and Siam. The embassy stayed in France from June 1686 to March 1687.

Tachard joined the second embassy to Siam in March 1687, organized by Colbert. The embassy consisted in five warships, led by General Desfarges, in part to return with the members of Siamese embassy. The mission was led by Simon de la Loubère and Claude Céberet du Boullay, director of the French East India Company. The disembarkment of French troops in Bangkok and Mergui led to strong nationalistic movements in Siam directed by Phra Petratcha, and ultimately resulted in the 1688 Siamese revolution in which king Narai died, Phaulkon was executed, and Phra Petratcha became king.

Desfarges negotiated to return with his men to Pondicherry. In the later part of 1689, Desfarges captured the island of Phuket in an attempt to restore French control. Tachard, with Siamese envoys, translating the letter of king Narai to Pope Innocent XI, December 1688.

Meanwhile Tachard returned to France with the title of "Ambassador Extraordinary for the King of Siam", accompanied by Ok-khun Chamnan, and visited the Vatican in January 1688. He and his Siamese embassy met with Pope Innocent XI and translated Narai's letter to him.

In 1690, when Tachard tried to return to Siam, a revolution had happened, King Narai was already dead, and a new king was on the throne. Tachard had to stop at Pondicherry and return to France without obtaining a permission to enter the country.

In 1697, Tachard again went to Siam, and managed to enter the country this time. He met with Kosa Pan, now Minister of Foreign Affairs and Trade, and the new king Petracha, but the meeting did not result in any significant agreements.