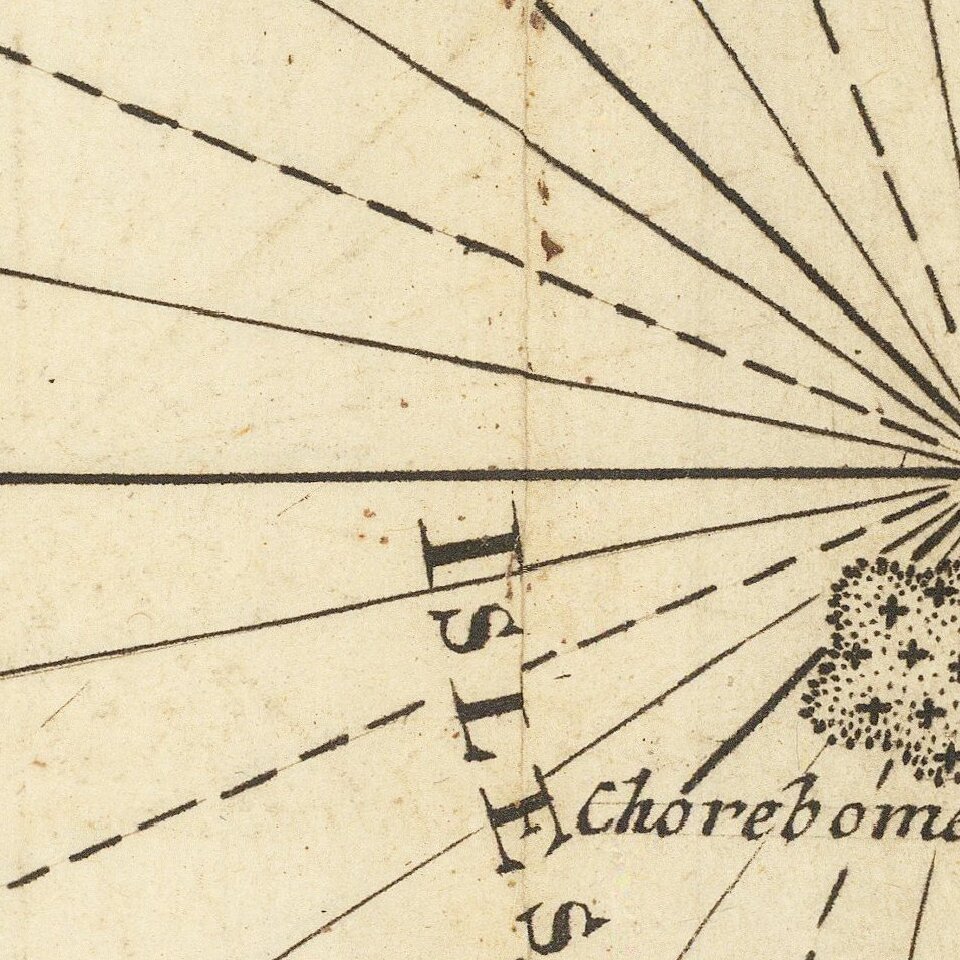 Striking old-color example of the first edition of Pierre Mortier's fine, two-sheet map of the Indian Ocean and contiguous regions, first published in 1700. Both were included in the expansion of the famous Neptune Francois.

The charts extend from Saudi Arabia and the Horn of Africa in the west to the Straits of Malacca, with the focus centered on India and Pakistan. The chart includes both rhumb lines and details in the interior of the covered regions. Each portion of the chart, east and west, contains a simple title in an oval (east) or octagonal (west) cartouche.

The chart on the right is a chart of south central Asia, with specific mention of the Maldives, the Andaman Islands, and Ceylon (Sri Lanks). Sumatra peeks out of the eastern border, with the southwest peninsula showing the Kingdoms of Siam, Mataban, Pegu, and, to the north, Grant Thibet. The Indian subcontinent is divided into smaller regions, with the entire north labeled as the Empire of the Great Mogol. The Mughal Empire was an Islamic dynasty that dominated much of the Indian subcontinent from the sixteenth to the eighteenth centuries.

To the east of India, and on the adjoining sheet, is Safavid Iran, titled Empire of the Persians. The Safavid dynasty ruled the Iranian peninsula from 1501 to 1736. The title of this eastern sheet emphasizes the isles of Zocatora, or Socotra, and the Amirante Islands, while the Arabian Peninsula and Eastern Africa are also included.

Together, the two sheets highlight the major trading islands and entrepots which were then the gateways for European traders to Asian goods. It also shows areas under Ottoman control, highlighting the disputes that often erupted over trade rights and access and which were underwritten by religious difference.

The Maldives, Ceylon, and the Andamans

One hundred years before this map was published, the Dutch (1602) and English (1600) East India Companies were founded in order to trade directly with the Indian subcontinent. They followed Portuguese traders who had set up trading forts on the subcontinent. They also relayed trade from the lucrative Spice Islands in southwest Asia. Both companies operated a monopoly over trade and gained immense power.

By 1700, the Dutch and English were joined by the French and Danish East India Companies, but the English were by far the strongest presence in Asia at that time. Eventually, during the century after the publication of this map, the lines between commercial and political dominance becoming increasingly blurred. The English East India Company's control of the seas, greater resources, and more advanced military training and technology led it to become attractive to a portion of the Indian elite. These factors were crucial in allowing the Company to gain control over the Bengal region by 1765 and sideline other European countries. India later became a British colony.

The Maldives, to the east of India, had long been coveted as a valuable port and they held importance due to their central location within the Indian Ocean, half way between Africa and the Straits of Malacca. The Portuguese were the first Europeans to come, in 1558, but they were resisted by the mostly Islamic population. The Dutch came next, in the mid-seventeenth century, but they only ensured their access to ports and watering; they did not involve themselves in local affairs. Long after this map was published, in 1796, the British took the Maldives from the Dutch and it became a protectorate in 1887.

The colonial fate of the Maldives was tied to that of Ceylon, which is now known as Sri Lanka. Like the Maldives, the Portuguese were the first Europeans to arrive, in 1505. They built a fort and extended their rule over the island, despite intense indigenous resistance and the survival of the independent Kingdom of Kandy. In 1638, the Dutch came and the Dutch East India Company (VOC) signed a treaty with King Rajasinghe II to eject the Portuguese. The Dutch controlled Columbo by 1656, but instead of leaving as promised, they stayed and they were the main controlling force on the island when this map was published.

Again like the Maldives, Britain occupied the island in 1796 as part of the Napoleonic Wars. The Kingdom of Kandy fought off a British invasion in 1803, but the British, under the auspices of the East India Company (EIC), remained a powerful presence on the island. Kandy was defeated in 1815, leaving the entire island in British hands.

Additionally, the map's title mentions the Andaman Islands. Unlike the other two islands in the title, the Andamans were not a valuable trade center. Indeed, they were and remain one of the only places on Earth that have had little to no contact with the developed world. The Nicobar Islands, to the south, were colonized by the Danish East India Company in 1755, long after this map was published. The British later set up outposts on the Andaman Islands, but the local peoples frequently attacked shipwrecked survivors and lone Europeans, gaining a fearsome reputation in the process.

Socotra and the Admiral Islands

The eastern sheet of this set singles out Socotra and the Admiral Islands in their title. At the time of publication, both the Arabian Peninsula and Socotra Island were under Ottoman rule. Earlier, in 1507, the Portuguese had tried to establish a base on Socotra, but they found the port conditions poor and the health conditions worse. The Mahra Sultanate took control in 1511, converting some of the mostly Christian population to Islam.

In 1834, The East India Company attempted to buy the island from the Mahra Sultan, but he refused. Like the Portuguese, they also found the anchorages poor and therefore left the islands in 1835. Today, the island is part of the Republic of Yemen.

Finally, the Amirante Islands are in the southern portion of the eastern chart. They were discovered by the Portuguese explorer Vasco de Gama on his second voyage in 1503, although Arab and Indian traders may have already known of the archipelago. The islands remained as a watering station and stop-over points for the East Indies trade. They were claimed by the French in 1802 and passed to British control in 1814. Then, the islands were administratively paired with Mauritius and, later, with the Seychelles.

Mortier and the Neptune Francois

These maps were integrated into the expansion of the most famous sea atlas of the seventeenth century, the Neptune Francois. As published in Amsterdam, this third part of the work, Suite du Neptune Francois, ou Atlas Nouveau des Cartes Marines, contained maps prepared for the king of Portugal.

Pierre, or Pieter, Mortier (1661-1711) was a Dutch engraver, son of a French refugee. In 1690 he was granted a privilege to publish French maps in Dutch lands. In 1693 he released the first and accompanying volume of the Neptune Francois. The third, with these charts, followed in 1700.

The highlighted islands emphasize the importance of ports and stopping places to Europeans hungry for Asian trade. This is a fine example of this highly sought-after map.

Pierre, or Pieter, Mortier (1661-1711) was a Dutch engraver, son of a French refugee. He was born in Leiden. In 1690 he was granted a privilege to publish French maps in Dutch lands. In 1693 he released the first and accompanying volume of the Neptune Francois. The third followed in 1700. His son, Cornelis (1699-1783), would partner with Johannes Covens I, creating one of the most important map publishing companies of the eighteenth century.