1830. Chart Shewing the Position of all The Lighthouses &c. in the British Isles, and Describing their Respective Appearances. . . .

Chart Shewing the Position of all The Lighthouses &c. in the British Isles, and Describing their Respective Appearances. . . . information: 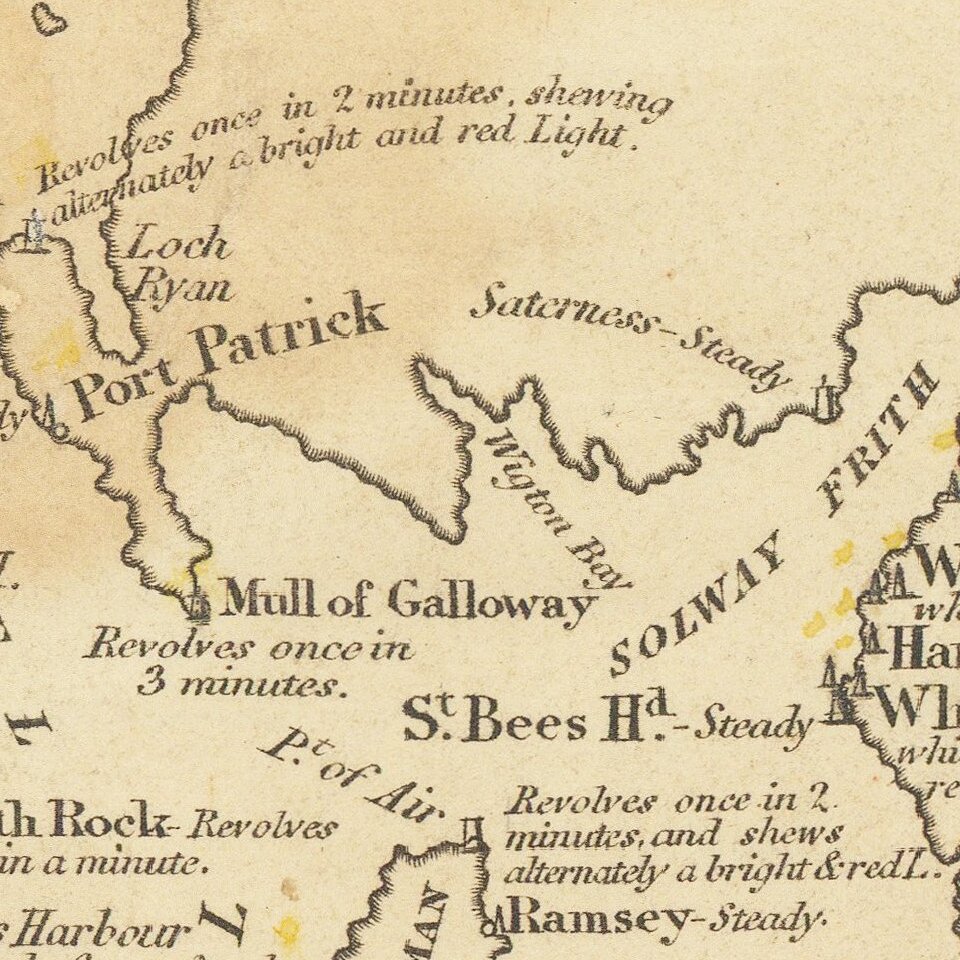 Rare J & A Walker sea chart locating all of the lighthouses in the British Isles, including extensive notes on the appearances of the lights.

The chart includes the southern Shetlands, the Hebrides, and the northwest coast of France, in addition to England (with Wales), Scotland, and Ireland. Each lighthouse is designated as a coast or harbor light, named with notes about the regularity of the light, either steady or revolving, as well as information about the effects of weather conditions on the lights.

For example, at Dover, “Two steady L[igh]ts shewn while 10 feet depth is in the Harbour.” The light at Swansea is “Steady, & of a red colour.” Tuskar Rock Light, in St. George’s Channel, “Revolves-shewing successively 2 bright & 1 Red Lights in 2 minutes. in fogs & co. a bell is tolled.”

This sort of information would have been vital to fishing and maritime trade vessels, as well as the Royal Navy. Britain’s maritime industry was a major employer and contributor to the economy, and the Royal Navy was the most powerful in the world at this time.

Lighthouses have guided maritime travel on the shores of the British Isles since Roman times. A well-preserved example lies within the grounds of Dover Castle, Kent. Many ancient and medieval lights were housed in religious buildings along the coast. In the eighteenth century, the design of lighthouses was modernized and transatlantic trade increased, resulting in the construction of more lights across the islands. Today, there are more than 60 lighthouses in the UK. Historically, lighthouses have been managed by Trinity House, a centuries-old organization dedicated to safeguarding shipping and seafarers.

Many famous lighthouses are in included on this chart. The most southerly light on the British mainland is at Lizard Point. A light has stood there since 1619; in 1830 it had “Two steady Lights.”

The oldest surviving lighthouse structure in Britain is Chalk Tower at Flamborough Headland, Yorkshire. That beacon was never actually lit; however, another light was built in 1806 and is described here as “Revolves—shewing successively 2 bright & 1 Red Light in 2 minutes.”

The chart is very up to date. For example, the Mull of Galloway light—“Revolves once in 3 minutes”—only opened in 1830, the same year the chart was published. It was built by the Stevensons, uncles of Robert Louis Stevenson, who built many of the lighthouses in Scotland in the first half of the nineteenth century.

The chart is apparently very rare. OCLC lists no copies and we found no examples listed in AMPR or any auction records going back more than thirty years.

We previously handled the 1833 edition of the map in 2012, but this is the first time we have encountered the 1830 edition.