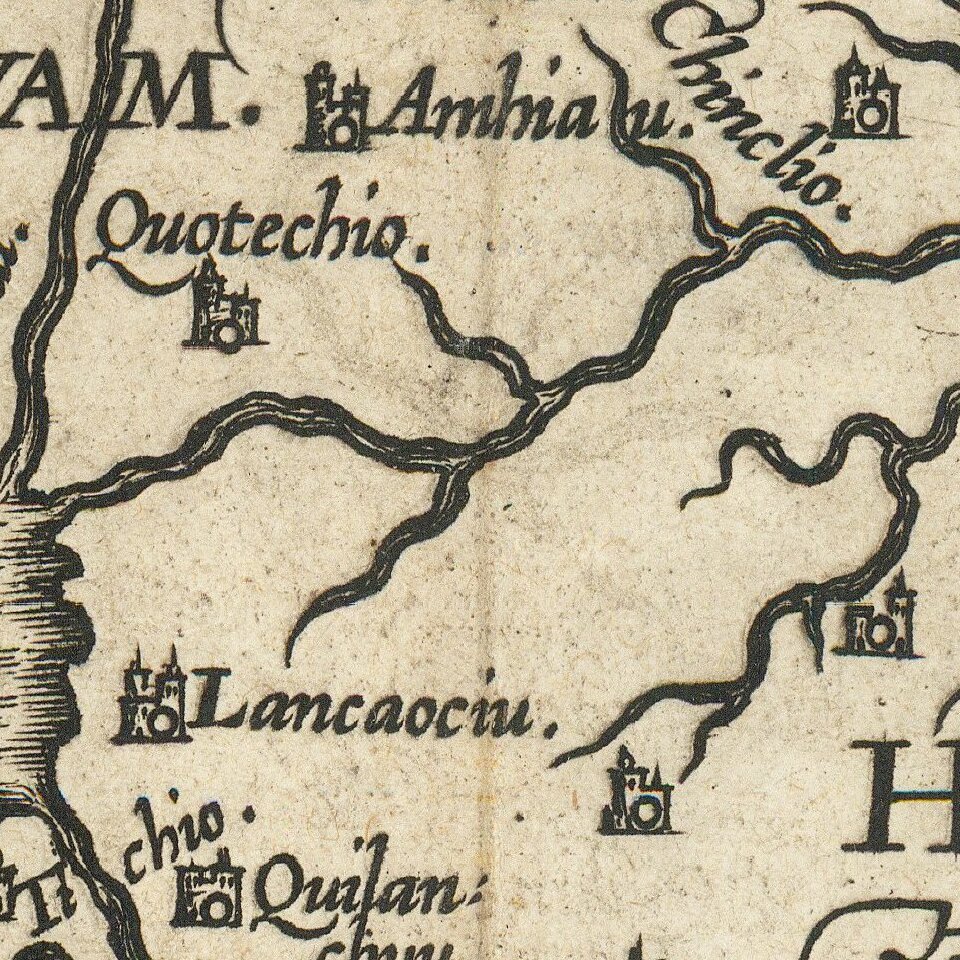 Very Rare English-Language Edition of the Ortelius Map of China.

Fine example of Abraham Ortelius's map of China, from the exceedingly rare English edition of his Theatrum, published only in one year - 1606.

Ortelius' map of China is taken directly from reports of the Portuguese mapmaker Luis Jorge de Barbuda (Ludovicus Georgius), who made a manuscript map of China that reached Ortelius via Arias Montanus. First published in 1584, Ortelius' map of China is the earliest printed map to focus on China and the first to illustrate the Great Wall of China. Tooley referred to the map as the standard map of the interior of China for over sixty years. With its three lushly designed cartouches and many illustrations of indigenous shelters, modes of transportation, and animals, this is one of Ortelius's richest engravings.

When this map appeared, it was by far the most accurate representation of China to appear on a printed map. Japan is shown on a curious curved projection reminiscent of Portuguese charts of the period with Honshu dissected along the line of Lake Biwa. The Great Wall is shown, but only a relatively small section, its length is significantly underestimated. The Tartar "yurts" are dotted across the plains and steppes of Central and East Asia.

"The book was the largest ever printed and published in England up to that date, measuring at least an inch more that uncut copies of the Bishop's Bibles of 1568, 1572 and 1602, or the Genevan versions in black letter of 1578–83... No surviving copies are known to exist on the European continent [i.e. excluding copies in the British Isles]” (Wardington Catalogue).

There are 3 states of the map:

Abraham Ortelius is perhaps the best known and most frequently collected of all sixteenth-century mapmakers. Ortelius started his career as a map engraver. In 1547 he entered the Antwerp guild of St Luke as afsetter van Karten. His early career was as a business man, and most of his journeys before 1560 were for commercial purposes. In 1560, while traveling with Gerard Mercator to Trier, Lorraine, and Poitiers, he seems to have been attracted, largely by Mercator’s influence, towards a career as a scientific geographer. From that point forward, he devoted himself to the compilation his Theatrum Orbis Terrarum (Theatre of the World), which would become the first modern atlas.

In 1564 he completed his “mappemonde", an eight-sheet map of the world. The only extant copy of this great map is in the library of the University of Basle. Ortelius also published a map of Egypt in 1565, a plan of Brittenburg Castle on the coast of the Netherlands, and a map of Asia, prior to 1570.

On May 20, 1570, Ortelius’ Theatrum Orbis Terrarum first appeared in an edition of 53 maps. By the time of his death in 1598, a total of 25 editions were published including editions in Latin, Italian, German, French, and Dutch. Later editions would also be issued in Spanish and English by Ortelius’ successors, Vrients and Plantin, the former adding a number of maps to the atlas, the final edition of which was issued in 1612. Most of the maps in Ortelius Theatrum were drawn from the works of a number of other mapmakers from around the world; a list of 87 authors is given by Ortelius himself

In 1573, Ortelius published seventeen supplementary maps under the title of Additamentum Theatri Orbis Terrarum. In 1575 he was appointed geographer to the king of Spain, Philip II, on the recommendation of Arias Montanus, who vouched for his orthodoxy (his family, as early as 1535, had fallen under suspicion of Protestantism). In 1578 he laid the basis of a critical treatment of ancient geography with his Synonymia geographica (issued by the Plantin press at Antwerp and republished as Thesaurus geographicus in 1596). In 1584 he issued his Nomenclator Ptolemaicus, a Parergon (a series of maps illustrating ancient history, sacred and secular.) Late in life, he also aided Welser in his edition of the Peutinger Table in 1598.