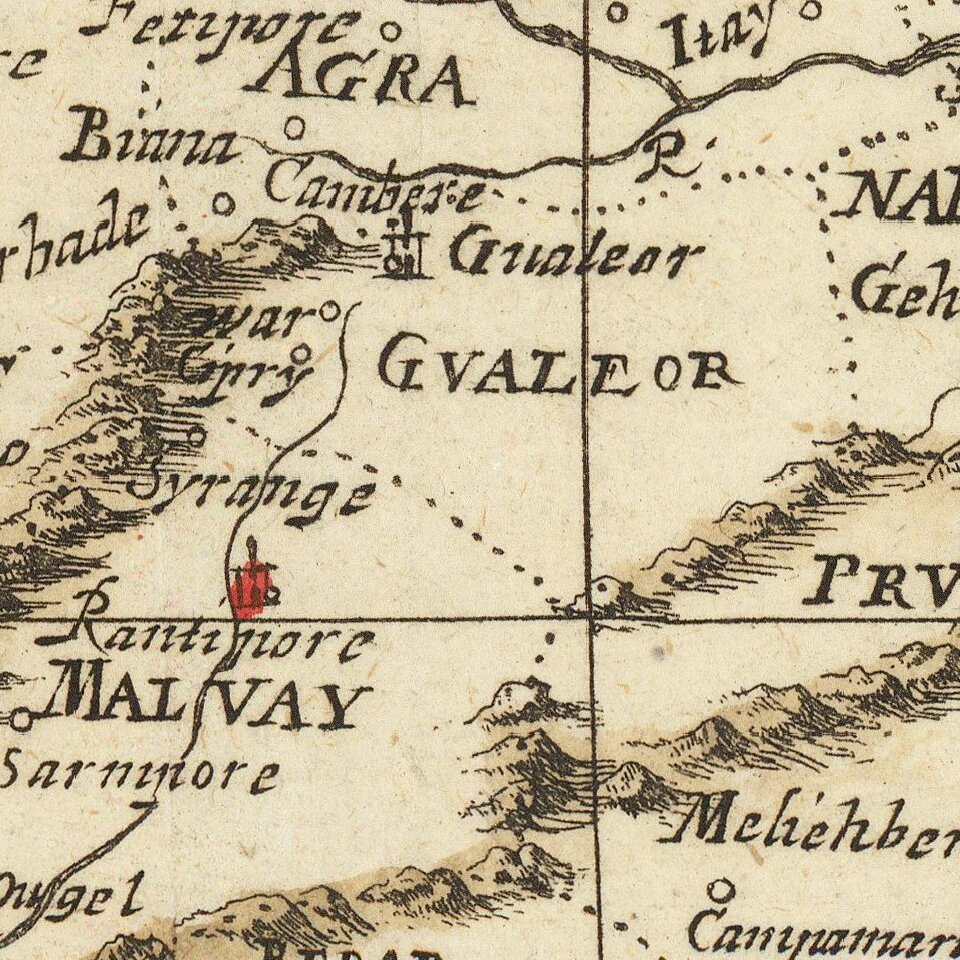 An impressive map of northern India and the surrounding region. The map is superimposed on a scene showing a small city, with a river through the foreground and mountains in the background. Text hangs from the map containing a brief description of the Moghul Empire and its rule in Delhi.

The map is very attractively designed, stretching from Deccan to Tartaria and Persia to Burma. The map names many rivers, regions, cities as well as drawing some geomorphological features. The Ganges is shown in detail, with an accurate location of its mouth and source, though the Brahmaputra is shown sourced from a lake. "Thibet" is named and part of "Turquestan". Many of the great cities of the area are shown, including Lahore, Kabul, Agra, and Delhi.

Almost all of the land shown on the map would have been ruled by the Mughal Empire at the time. Akbar, Babur, Humayun, and several other great early leaders had expanded this empire from Kabul eastwards through various wars and campaigns. The empire thrived for nearly two centuries, which is where it stood at the time this map was made. By 1686 some cracks were already present in the leadership as Aurangzeb, the leader at the time, had conservative tendencies and cracked down on the religiously and culturally tolerant policies which helped the empire thrive. Open revolts were common by his death in 1707, and the empire was never again able to regain its control.

The scene in the background is meant to depict Delhi, which the text claims had been the residence of the Grand Mughal for fifty years, an exaggeration of twelve years at the time of publication. This attractive scene would make for a minuscule Delhi, with several spaced blocks, very different than what the city would have looked like at the time. The text refers to "Gehanabad," which some contemporary European sources claim was the name that the Moghul emperor gave to Delhi.

This map is very rare on the market.