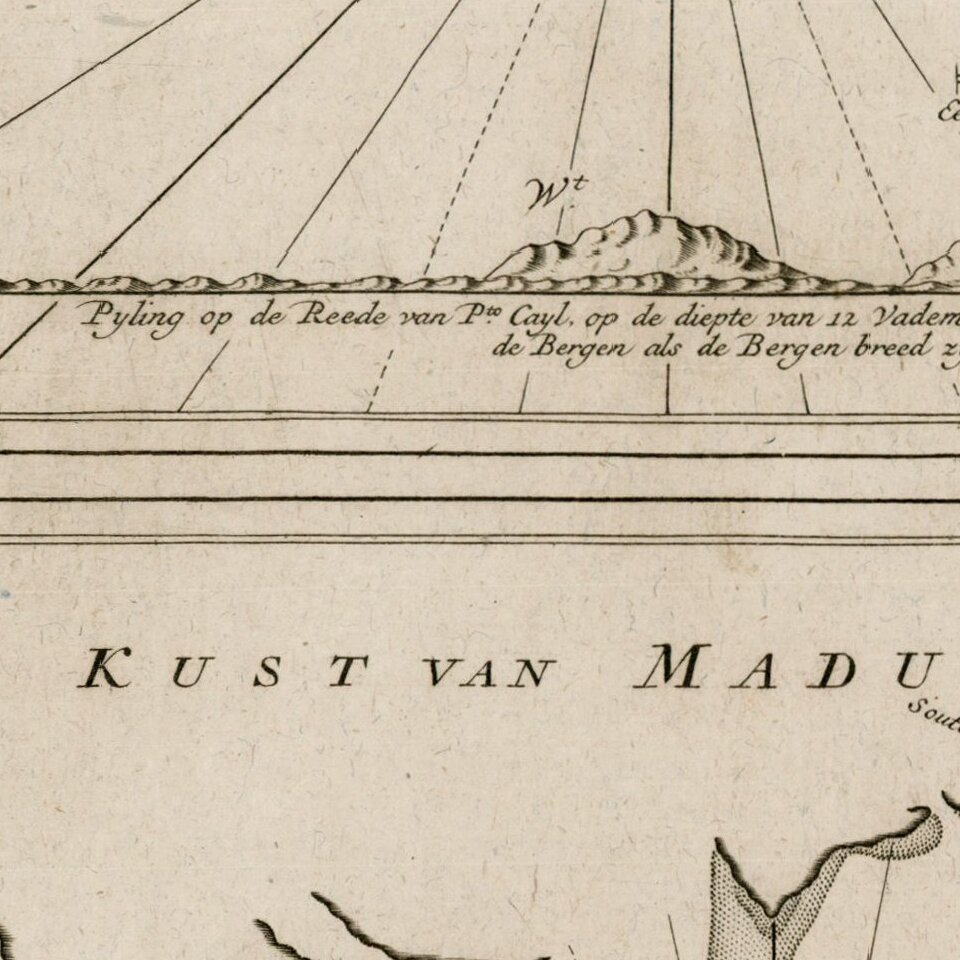 Nice example of this detailed pair of maps of the Madura Coast, from the Dutch East India' Company's Secret Atlas.

The chart is oriented with west at the top and shows the areas around the Dutch trading houses ast Warande Patnam and de Groote Kerke van Pt. Cayle and Oud Cayl in the top chart and Tutucoryn in the lower chart, with a profile view. The map includes a latitude scale, compass rose and system of rhumb lines, soundings, anchorage's, etc.

The chart was created from manuscript charts compiled by the Dutch East India Company (VOC), which were privately maintained over the course of the VOC's 200 year history. It is the most detailed chart of the region published to date and is extremely rare, having only been issued directly to VOC merchant ships bound for the region and never offered commercially for sale. We are aware of only one other example which has been offered in a dealer catalogue in the past 25 years and no examples offered at auction.

The Dutch East India Company (in Dutch, known as the VOC: Vereenigde Geoctroieerde Oostindische Compagnie), was the dominant trade force in Asia for nearly 200 years. During this time, in aid of its commerce, the VOC created many extremely detailed charts of the trading regions which it reached. From the beginning, the VOC had its own mapmakers and the charts created by these mapmakers were kept in secret, in order to maintain a trade advantage in the regions charted. The mapmaking firms of the Blaeu Family and Van Keulen Family were integrally involved in the maintenance and updating of the VOC's charts, which were maintained only in manuscript form, to minimize the risk of their falling into the hands of others.

However, beginning in 1753, the VOC began to issue a printed atlas, which included charts to navigate the waters from South Africa to Japan. The atlas was produced by Johannes (II) Van Keulen, official hydrographer to the VOC, and was officially known as Part VI of the Zee-Fakkel. The VOC was careful to limit the use of its printed maps, so many sets are limited only to the regions which a particular merchant ship would have visited on its journey. Because the maps were working charts and closely guarded by the VOC and never sold commercially, the maps are extremely rare on the market.