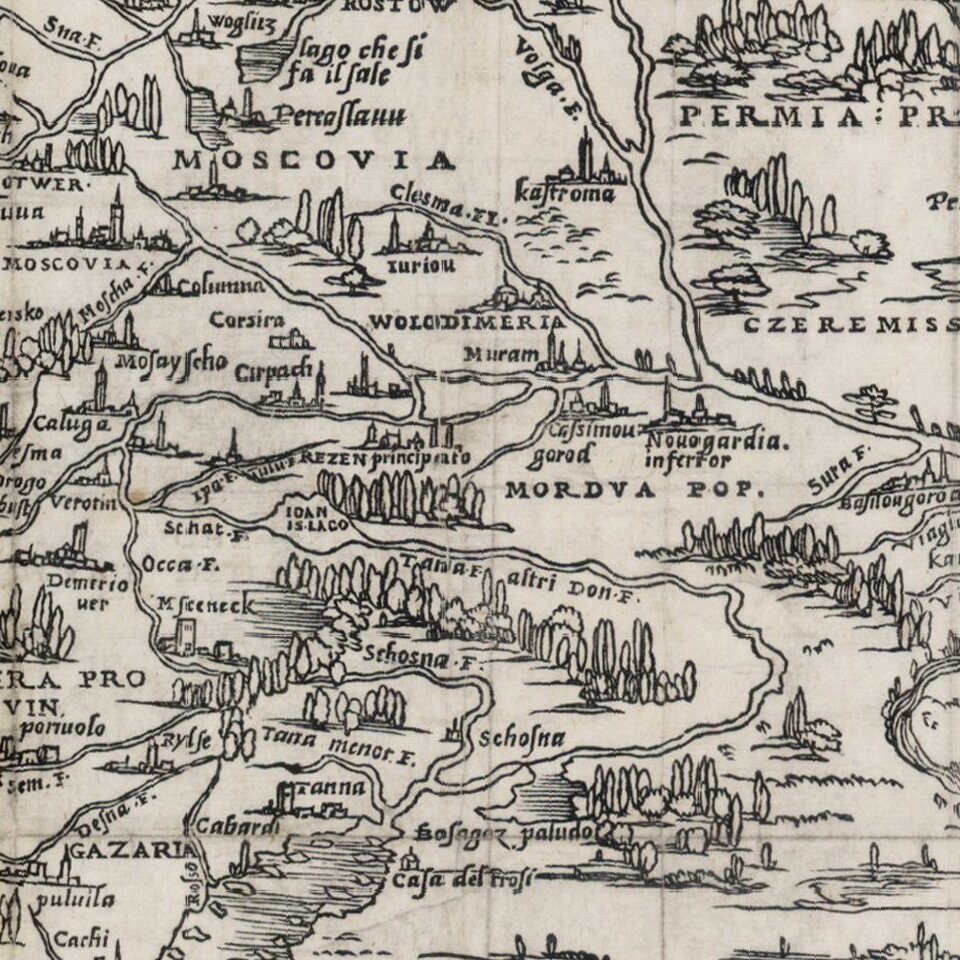 Extremely rare map of Russia, engraved by Gastaldi, based upon the work of Baron Sigismund von Herberstein. Herberstein, a diplomat from the Austrian Imperial Court, was sent to Russia twice between 1516-26, during which time he gathered enough information to compile a map, first published in Vienna in 1546. In his work on the early cartography of Russia, Leo Bagrow notes:

Heberstein was twice at Moscow-in 1517 and 1526. Herberstein's knowledge of a Slavonic language facilitated his intercourse with local inhabitants on his travels in Russia, and his academic education gave him a desire for knowledge of a country so little known to Western Europe. He missed no opportunity to question the people he met, not only on the customs and government of the country, but also on its geography, and particularly that of the border regions. He verified the information he collected by cross-questioning different persons on the same subject, and he also tried to obtain various written documents and records of itineraries. He attempted to procure maps too, but as these, besides being very scarce, were kept strictly secret by the authorities, he tried to persuade those whose knowledge he could trust to prepare maps for him. According to Lyatsky, who however made this statement after having left Russia, he had asked him to compile a map but met with a refusal. Herberstein does not tell us whether he succeeded in obtaining cartographic materials from any other person. But he certainly obtained plenty of oral information and some graphic material too. Thus we know that Grigoryi Istome and Vlasiy and Dmitriy Gerasimov, separately, described to him the navigation from the mouth of the North - Dvina, round Scandinavia, to Denmark. Somebody else gave him a travelling guide from the Dvina to the Ob'. By the time he came to Moscow this route was already fairly well known: in 1491 Andrey Petrov and Vasiliy Ivanov Boltin were despatched to the Pechora in quest of silver ore; in 1499 Prince Kurbskiy led an expedition to the Yugor region and crossed the Ural. Herberstein reprinted the travelling guide to the Pechora and the Ob', and we know that it already contained information on the town of Kumbalik, i.e. Pekin. The reference to a sea-route by the north coast of Europe and Asia to China made by Paolo Giovio, following Gerasimov, suggests that Herberstein had also been told about this route at Moscow. About the campaign against the Kazan' Tartars in 1524 Herberstein had heard direct from one of its participants, Voevoda S. Chelyadin, whom he had met earlier (1514) at Vilna, where Chelyadin was living as a prisoner of war after the battle at Orsha. Herberstein helped and comforted him at that time and gave him 20 ducats. At last, in the 1540's, Herberstein began to sort the materials he had collected and to write up his Notes. The first edition of his Rerum Moscovitarum comentarii, containing a copper-engraved map, appeared at Vienna in 1549. This map however was preceded by another, with the same title, which had been engraved by Hirsvogel three years earlier. . . But this map was of larger format (560 x 358 mm.) and would have had to be folded to fit the book. This presumably explains the production of a second map in reduced size (261 x 160 mm.). There are practically no alterations in this second map, save the omission or addition of a few names. The only notable alteration is the introduction of the Solovki. Comparing the two with each other or with later issues, we must bear in mind that the repetition of an engraving by different masters is naturally not merely a reproduction or a copy of the original-certain divergencies in the disposition of the names and their writing will always occur, especially if the map has been re-engraved for a new publisher, or in a different language.

Sigismund Herberstein was Emperor Maxmillian I's ambassador to Russia, who made two official trips to Moscow. In all, between 1515 and 1553, Herberstein participated in sixty nine foreign missions, which traveled throughout much of Europe, including Turkey.

During his travels in Russia, he made extensive observations. Herberstein was able to communicate freely with the Russians because of their knowledge of Slovenian and Slovenian as both the Russians belong to the Slavic languages. Herberstein used this knowledge to ask a variety of people in Russia on various topics, which gave him a vision of Russia and the Russians, which surpassed prior visitors. It is likely that he wrote his first report about life in Russia between 1517 and 1527, but the text has not survived to this day. In 1526 he was asked to write a formal report on his experiences in Russia, but it remained relatively unnoticed in the archives until he could find time to revise and expand it. The result was his greatest work, a book written in Latin under the title Commentarii Rerum Moscoviticarum (literally Comments on Muscovite Affairs), published in 1549. This book became the main source of knowledge about Russia in Western Europe.

Giacomo Gastaldi (1500-1566) is considered the foremost Italian cartographer of the sixteenth century, alongside Paolo Forlani. His skills of compilation are comparable to those of Mercator and Ortelius, yet much less is known of his life than of his two contemporaries. Gastaldi was born in Villafranca, Piedmont, but had established himself in Venice by 1539. He originally worked as an engineer, but turned to mapmaking from the 1540s onward.

It was in Venice where he made his reputation as an engraver, geographer, and cosmographer; for example, he was asked to fresco maps of Asia and Africa in the Palace of the Doge, or the Council of Ten, Venice’s governmental body. He also frequently consulted on projects for the Savi sopra la Laguna, drawing maps for this body which oversaw the regulation of fresh and salt water around Venice.

His contemporaries also recognized his skill, as he was named cosmographer to the Republic of Venice, was a member of the Accademia Veneziana, and was a major source for other geographers and mapmakers including Camocio, Bertelli, Cock, Luchini, and Ortelius. He even had his own distinct style of copper engraving that made him a pioneer in his day and makes his works iconic today.