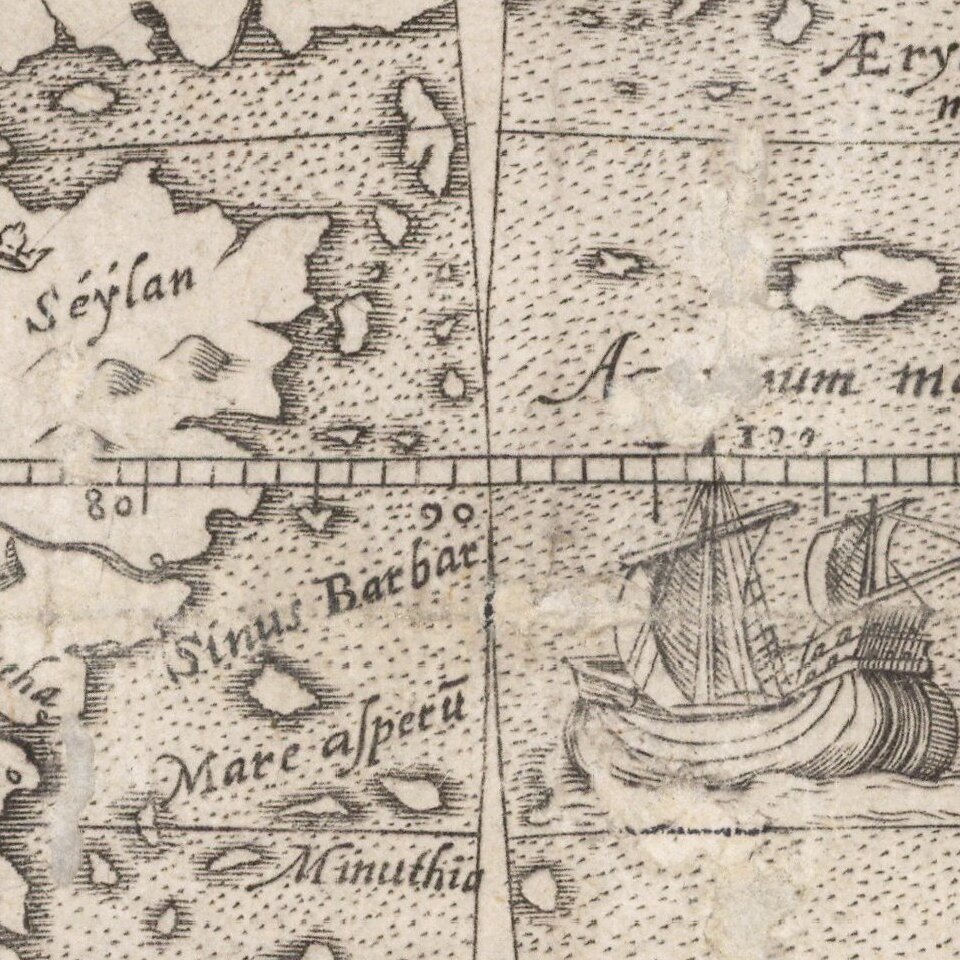 The gores depict the world based upon the cartographic details prevailing in about 1540 to 1550.

Among the more noteworthy features of the gores are:

An Early Discovery of Australia?

Perhaps the most significant detail on the map relates to the discovery of a southern continent in 1499. The words Terra nondum Plene cognita Inventa Ao. 1499 are shown in the southern (antarctic) continent (Translation: Land not yet fully known, recently found 1499).

These words would seem to derive from the Oronce Finaeus world map of 1531 and the "Paris Wooden Globe" of 1535 and the Hartmann Globe Gores of 1535 (Shirley 72). The inscription also appears on Caspar Volpel's globe gores of 1536 (Shirley 73). In his book The Discovery of Australia . . . , George Collingridge attributes this phrase as confirmation of the discovery of the Australian continent. Referencing the nearly identical globe gores of Willem Nicolai referenced below, Collingridge states at page 88:

The legend--Terra nondum plene cognita, Inventa Ao. 1499-- is set down in a more correct position than on the Paris wood globe of 1535, and to the west of it, on the margin of the Australian Continent, may be noticed the inscription Brasilia Regio and Psitacorum terra.

While Collingridge's theory received endorsements in the following decades, modern writers have generally rejected his conclusion that the Portuguese discovered Australia in the late 15th Century.

Elements of Oterschaden's geography almost certainly derive from Francois Demongenet's terrestrial globe of 1560, both were in Southern France, Demongenet in Vejoul in Franche Comté. In addition a copper engraved globe diameter 21 cm ascribed to Christoph Schleppp, 'the Welserglobus' now in Bibliothèque Nationale, Paris is almost identical with Oterschaden. (see Fauser Die Welt in Haunen, 1967 pp 68-71.) It seems likely that a group of globe makers in France, Germany and Leiden namely Oterschaden, Schniepp, and Willem Nicolai were using a similar source of geography.

The gores have been dated 1603 because of their similarity to the gores of Willem Nicolai (Shirley 241), which bear the date 1603, although it is not known which gores were engraved earlier. Shirley notes that the work also resembles the globe of Christoff Schniepp, published in Augsburg in about 1600.

The title is on the sheet not present ( Nova et integra universi Orbis descriptio), as is the signature of the maker (Joanes Oterschaden Belga) and dedication to the Bishop of Cominges, who occupied his see from 1580 to 1613.

Oterschaden's globe gores and globes are extremely rare. A single incomplete set of gores was offered at auction in 2003, but no complete sets have appeared at auction or in printed dealer catalogs.