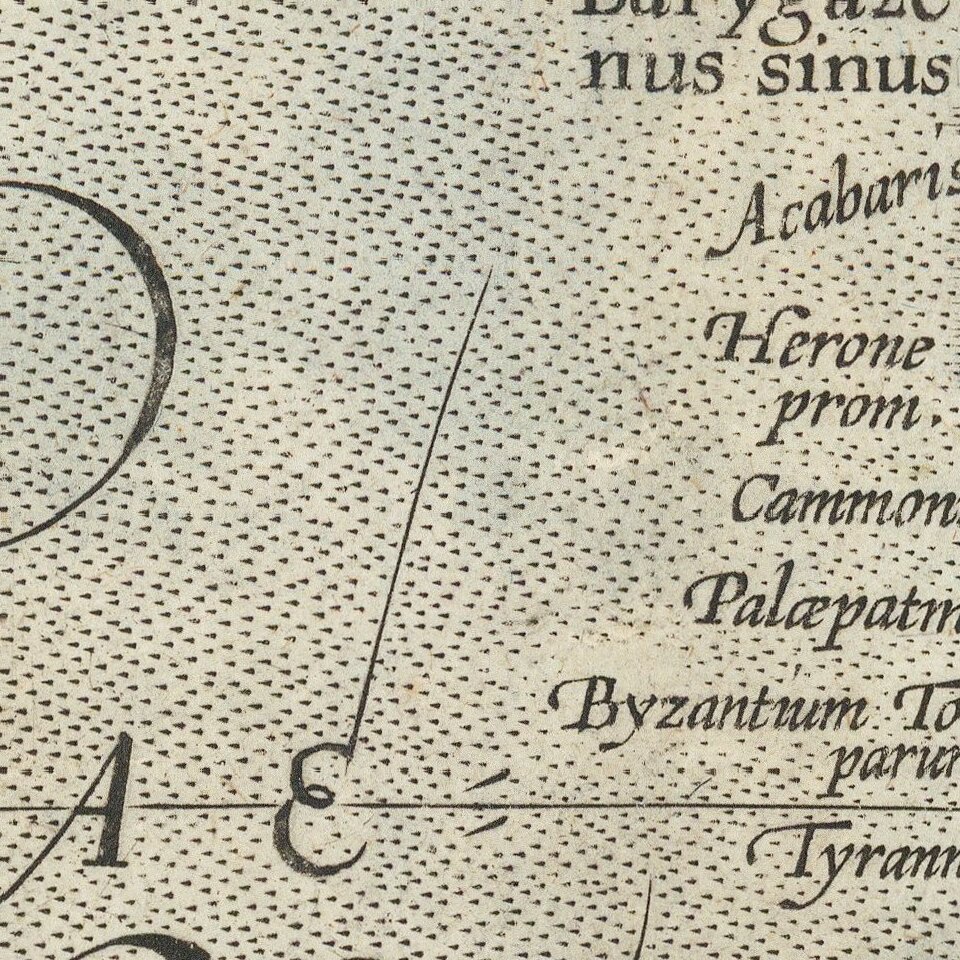 Striking historical map of the Indian Ocean and contiguous regions of the Middle East, India and Southeast Asia, published by Ortelius in his Parergon. This map was created based on the Periplus Maris Erythraei, whose author is unknown. It directly links explorers contemporary to Ortelius to ancient and famed voyagers such as King Hanno of Carthage and Odysseus from Homer’s Odyssey.

Oriented northward, this ornate map shows regions around the Indian Ocean (Erythraeum Sive Rubrum Mare). The map stretches from Egypt (Aegyptus) and the eastern coast of Africa (Barbaria and Azania) across the Arabian Peninsula (Arabia Eudaemon), India (Mambari regnum), and to Southeast Asia (Aurea Regio). The Equator (Aequinoctialis circulus) and the Tropic of Cancer (Circulus Cancri) are notable. There is also an inset map of the north-central Mediterranean.

Africa, the Arabian Peninsula, and India are shown in essentially their modern configurations, while Southeast Asia is a bit more abstract, speaking to the lack of knowledge of this area when Ortelius was making maps. Ortelius based this map off of the writings of Ptolemy, who based his own work on records of Alexander the Great’s travels.

The map contains few mountain ranges or rivers, only including those that are large and well-known, such as the Nile (Nilus) and the Ganges Rivers. This gives the viewer a sense of the geography of the areas without distracting from the cities, inset maps, or text. The water bodies are filled in with basic stippling, but contain a number of small, decorative elements. For example, four sea serpents can be found off the west coast of India. Cities are represented as miniature views, in typical Ortelius style.

The largest cartouche on the map is also an inset map of Greece and southern Italy. It portrays the voyage of Odysseus (Latinized to Ulysses), and the water bodies are decorated with a number of ships, some half sunk. Though not heavily labeled, many of the important locations from Homer’s Odyssey can be found on this inset map, including Ithaca, Ogygia, Scylla and Charybdis, and the island of the Cyclopes.

Another large strapwork cartouche contains the map’s title. The title indicates that the map represents a sailing voyage along the coasts of the Red Sea and the Indian Ocean recounted in the Periplus (a log of coastal ports and landmarks, and this one being the Periplus Maris Erythraei) by Arrian.

Two more inset maps adorn the upper corners of the map. One is called Annonis Periplus, showing the west coast of Africa as it was traveled by King Hanno from Carthage. He is said to be the first to sail around the African continent to reach the Arabian Sea (interestingly, he is also said to be the first person to tame a lion).

The other small inset map shows the Arctic region, which Ortelius calls Hyperborei. This inset is included to increase the aesthetic appeal of the map, and to remind the reader that despite the best efforts of modern explorers, a passage to the Far East via the North Pole had not yet been found by the English or the Dutch. In this way, Ortelius engages with the reader and compares the journeys of Odysseus and King Hanno to contemporary explorers of the 1500s.

Though Ortelius cites Arrian as the author of the Periplus in the title, a body of text on the map questions Arrian’s authorship. He notes a number of dissimilarities between this Periplus of the Erythraean Sea and one that Arrian wrote of the Black Sea, including differences in style and sources.

Although best known for his world atlas, the Theatrum Orbis Terrarum, the Parergon was a project of personal interest and the work that Ortelius himself considered his greatest achievement. He had a deep curiosity about classical antiquity which spurred him to create the Parergon maps, and the amount of time and detail he put into each map is clearly evident. Ortelius hand drew each map of the Parergon, which required considerable skill and knowledge of the area’s history and geography. It is considered the first historical atlas.

The Parergon was highly successful both as a supplement to the Theatrum and on its own. It was variously translated into French, German, Italian, and English and regularly printed until 1612. Further editions were more sporadic but still popular, such as the 1624 edition which was published twenty-six years after Ortelius’ death in 1598.

This map appeared in 1601. After 1612 and before 1624, the plate was touched up, with the major change being a shift from a two-line title into a four-line title. The title remained the same, however. Several new places names were also added.

This beautifully decorated map is an interesting look into Ortelius’ thoughts, as he gives his opinion on the author of the Periplus Maris Erythraei and the voyages of famous explorers. It intentionally blends history and myth, and it would certainly stand out in a collection of South Asian maps, Ortelius maps, or maps of the ancient world.