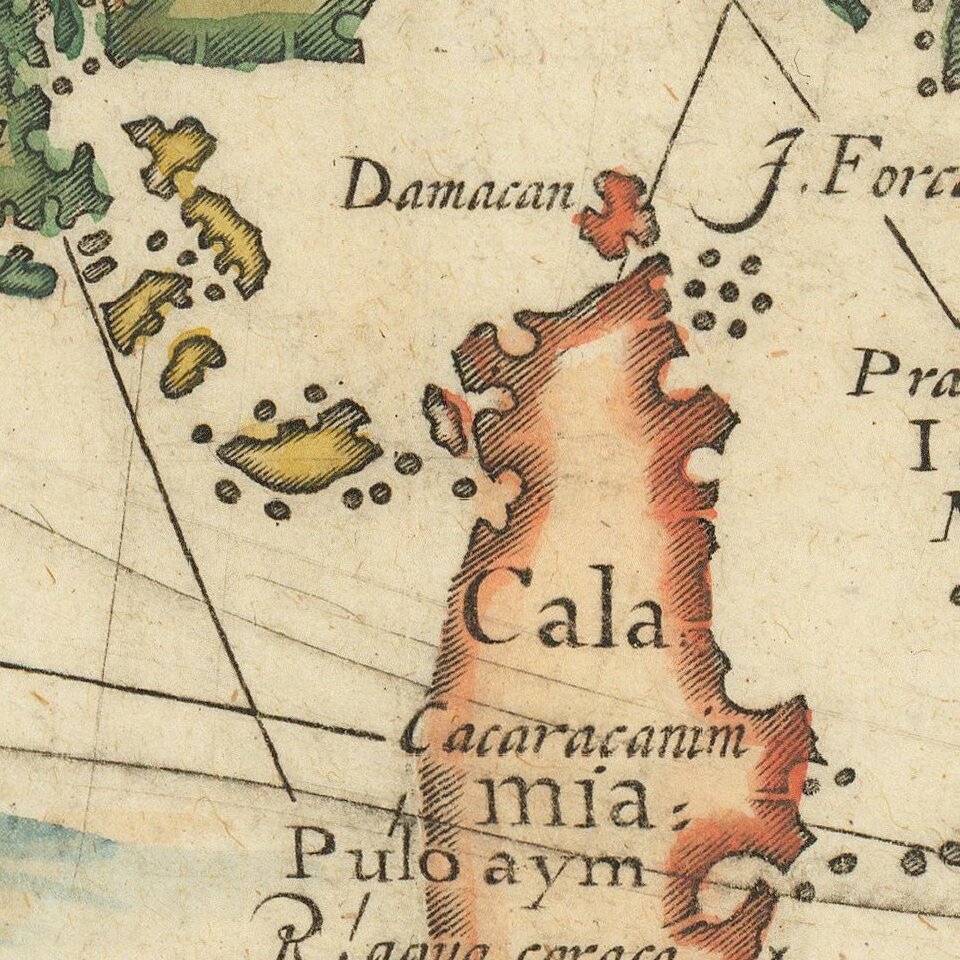 Oriented to the east, the map includes a detailed treatment of the region as it was then known. Marco Polo’s Beach is to the far south. Beach was one of several southern islands that came to be associated with Terra Australis and the southern continent. Here, it is where Australia would be encountered by Dutch sailors in the seventeenth century. The fact that land existed in that area was already known to local networks of traders and fisherman.

China dominates the map from the bottom left corner, a round depiction with huge, interconnected lakes; these four lakes are based on a Chinese legend. There is a veritable menagerie ranging about, including a camel, giraffe, rhinoceros, and elephant. Lake Chiama, which was thought to be the source of the Ganges River, is peeking out of the lower frame of the map.

The map, particularly its islands, are drawn in a portolan style, which speaks to the Portuguese portolan sources that Linschoten accessed while serving the Bishop of Goa. This is the first published map of the area to be based on Portuguese sources, as the Portuguese usually kept their geographic knowledge under lock and key. Besides portolan charts, Linschoten also used the work of Plancius, Fernão Vaz Dourado, and Bartolomeu de Lasso (as evident in the strange orientation of Palawan).

Perhaps one of the most arresting details is the rotund, teardrop shaped island of Korea, located between Japan and China. Korea’s status as a peninsula or an island was a topic of debate for European cartographers at this time. Indeed, Van Langren has hedged his bets here, including a sand bank that connects the island to mainland China. This nearly-circular depiction of Korea is unique in cartography; no other mapmakers are known to have adopted the model.

In addition to fascinating geography, the map is lavishly embellished with decorative details. In the upper right corner, framed by impressive strapwork, is a lengthy description of the geography at hand. More strapwork, including gargoyle faces, guard the scale bar and attributed of engraving to Henricus van Langren. A 32-point compass rose in the southern seas, as are two rather playful-looking sea monsters. More monsters and ships are spread throughout Maritime Southeast Asia, while a fierce sea battle takes place in the east, near another stunning compass rose.

Langren, Linschoten, and the Itinerario

This map was designed by Arnold Florent van Langren and engraved by his brother, Henricus in 1595. They were members of a prominent family of engravers. Along with their father, Jacob, the brothers also produced globes. The Van Langren family was granted a monopoly over globe production by the States General in 1592. In 1609, Arnold moved his family from Amsterdam to Antwerp, where his sons Jacob and Michael joined the business.

One of Arnold’s most famous clients was Jan Huyghen van Linschoten (1563-1611). As a young man, Linschoten traveled the world as part of the Portuguese East Indies trade. In 1583, his brother secured him a position as the Secretary to the Archbishop of Goa, a Portuguese colony. While abroad, he kept a diary, and began collecting other travelers’ diaries and accounts upon his return.

Upon his return, Linschoten published his journal from the Barenstz voyages. In 1595, he also published Reysgheschrift vande navigation der Portugaloysers in Orienten (Travel Accounts of Portuguese Navigation in the Orient) based on his research. The work includes sailing directions in addition to descriptions of lands still new to Europeans, like Japan. In 1597, Linschoten published again, this time a description of the African coast.

His most famous work, however, is Itinerario: Voyage ofte schipvaert van Jan Huyghen van Linschoten naer Oost ofte Portugaels Indien, 1579-1592 (Travel account of the voyage of the sailor Jan Huyghen van Linschoten to the Portugese East India). It was published in 1596 by Cornelis Claesz in Amsterdam. It was quickly translated into English (1598), German (1598), and French (1610). Latin editions appeared in Frankfurt in 1599 and Amsterdam in 1599.

Although Linschoten is known as the author of the Itinerario, he had a lot of help. Claesz convinced Linschoten to widen the project from his trip to Goa to include sailing directions and geographic descriptions, materials acquired through subterfuge from the Portuguese. The sailing directions proved important to the founding of the East India Company in 1602, as they revealed information previously kept clandestine by the Portuguese. Another person who played a role in the production of the book was Bernardus Paludanus, or Berent ten Broecke, who wrote the sections on Africa and America.

Claesz was also largely responsible for the addition of the maps. The first Amsterdam edition had a world map by Petrus Plancius, first published in 1594, and five detail maps, which were made by Arnold and his brother Henricus. This is one of the detail maps and is one of the most beautiful and influential maps of the region of the sixteenth century.

Korea as an island

The sequence of events and maps that led California to be portrayed as an island are much clearer than another famous peninsula-turned-island, Korea. Korea is briefly mentioned in the thirteenth century by Marco Polo as Cauli (Kauli), but otherwise Korea was not described again for European audiences until the late-sixteenth century.

As with Japan and China, most of the earliest bits of information about Korea came from the Jesuits sending letters sent back from East Asia. However, the Jesuits were not actually stationed in Korea; they could only glean impressions from Chinese and Japanese sources. For example, Father Luis Frois wrote of Korea in the context of a war with Japan in 1578. Frois explained that Korea was separated from Japan by a sliver of sea. It had previously been understood to be an island, he explained, but was now known to be a peninsula. However, why Korea was thought to be an island, by who, and how it was found to be a peninsula was not shared with Frois’ curious readers back in Europe.

The first known European to visit Korea was also a Jesuit, Father Gregorio des Cespedes. He accompanied Japanese troops during another war with Korea in 1592. The territory did not agree with Cespedes, who found it bitingly cold. He did not mention anything about the Korean peoples or their geography.

Travel writers, those who actually traveled and those who were more drawn to the armchair voyage, also wrote about Korea. Jan Huygen van Linschoten spent several years in Goa, India, where he had access to Spanish and Portuguese sources. In his Itinerario, first published in German and English in 1598, he suggests Korea is a large island called Core. Richard Hakluyt read the Jesuit letters, which were republished in sets of annual letters. In the second edition of his Principal Navigations (1599), Hakluyt included the information from Frois and Cespedes, scant as it was.

Given the relative dearth of source material, it is not surprising that early maps by Münster, Mercator and Ortelius omitted Korea entirely. The first map to show Korea was Orbis Terrarum Typus de Integro Multis in Locis Emendatus by Petrus Plancius (1594). It included “Corea” as a long, skinny peninsula barely attached to the northeast corner of China. Edward Wright, in the map accompanying Hakluyt’s Principal Navigations, adopted a similar depiction of Korea, as did other mapmakers from the 1590s onward.

Interestingly, the map that accompanied Linschoten’s Itinerario, by Arnold Floris van Langren, shows Korea as a large, round island. However, no other mapmaker is known to have followed this example. Another early island depiction that was widely adopted was that of Luis Teixeira in the 1595 edition of Ortelius’ Theatrum Orbis Terrarum. The long, thin island was used by several cartographers, including Jodocus Hondius, in the seventeenth century. Blaeu also used the Teixeira model before creating a new Korea in later maps that looked like a bat hanging from China, separated from the mainland by the thinnest of waterways.

Confusion over island vs. peninsula continued across seventeenth-century maps. For example, John Speed includes three separate versions of Korea across four maps in his A Prospect of the Most Famous Parts of the World (1626). It is shown on the Teixeira island model, as a thin peninsula, and as a blunt island. These various hypotheses as to the shape of Korea continued to coexist for decades.

Finally, in the 1650s, Father Martino Martini gathered more information and created a new map of Korea. In China from 1642 to 1651, Martini spent a good deal of time with Chinese maps and their makers. Thus, he created new maps showing Korea as a thicker, nearly rectangular peninsula in Bellum Tartaricum (1654) and the Atlas Sinensis (1655).

Also in the 1650s, a Dutch sailor named Hendrick Hamel was shipwrecked on Jeju, an island near southern Korea. Hamel and his fellow survivors would spend thirteen years in Korea, escaping to Nagasaki in 1666. He wrote about the ordeal in a journal that was published in 1668. Although it lacked maps, the ample descriptions confirmed that Korea gave a detailed, first-hand view of Korean geography and culture.

Nevertheless, several maps were published in the early eighteenth-century showing Korea as an island. The island myth, which most likely stemmed from a misreading of Japanese and Chinese maps by early Jesuits, proved to be quite entrenched. Only in 1735 did Jean Baptiste Bourguignon d’Anville produce a map with a roughly accurate outline of the peninsula and a relatively detailed interior.