Above, the Gunpowder Plot conspirators are together in discussion in one frame, each man labeled: Bates, Robert Winter, Christopher Wright, Iohn Wright, Thomas Percy, Guido Fawkes, Robert Catesby, Thomas Winter. They are flanked on either side by frames filled with German verse.

Below left, three of them are shown being dragged to execution.

Below center, one of the conspirators after being executed, his head on the ground, and another man taking his heart out of his open chest cavity.

Below right, all eight men's heads on pikes.

Text in Latin and French is inscribed in plate beneath lower images.

Shows a portrait of Thomas Percy and smaller ovals showing the apprehension of other conspirators in the Gunpowder Plot.

The Gunpowder Plot of 1605, in earlier centuries often called the Gunpowder Treason Plot or the Jesuit Treason, was a failed assassination attempt against King James I of England and VI of Scotland by a group of provincial English Catholics led by Robert Catesby.

The plan was to blow up the House of Lords during the State Opening of England's Parliament on November t, 1605, as the prelude to a popular revolt in the Midlands during which James's nine-year-old daughter, Princess Elizabeth, was to be installed as the Catholic head of state. Catesby may have embarked on the scheme after hopes of securing greater religious tolerance under King James had faded, leaving many English Catholics disappointed. His fellow plotters were John Wright, Thomas Wintour, Thomas Percy, Guy Fawkes, Robert Keyes, Thomas Bates, Robert Wintour, Christopher Wright, John Grant, Ambrose Rookwood, Sir Everard Digby and Francis Tresham. Fawkes, who had 10 years of military experience fighting in the Spanish Netherlands in suppression of the Dutch Revolt, was given charge of the explosives.

The plot was revealed to the authorities in an anonymous letter sent to William Parker, 4th Baron Monteagle, on October 26, 1605. During a search of the House of Lords at about midnight on November 4, 1605, Fawkes was discovered guarding 36 barrels of gunpowder-enough to reduce the House of Lords to rubble-and arrested. Most of the conspirators fled from London as they learned of the plot's discovery, trying to enlist support along the way. Several made a stand against the pursuing Sheriff of Worcester and his men at Holbeche House; in the ensuing battle, Catesby was one of those shot and killed. At their trial on January 27, 1606, eight of the survivors, including Fawkes, were convicted and sentenced to be hanged, drawn and quartered.

Details of the assassination attempt were allegedly known by the principal Jesuit of England, Father Henry Garnet. Although he was convicted of treason and sentenced to death, doubt has been cast on how much he really knew of the plot. As its existence was revealed to him through confession, Garnet was prevented from informing the authorities by the absolute confidentiality of the confessional.

Although anti-Catholic legislation was introduced soon after the plot's discovery, many important and loyal Catholics retained high office during King James I's reign. The thwarting of the Gunpowder Plot was commemorated for many years afterwards by special sermons and other public events such as the ringing of church bells, which have evolved into the Bonfire Night of today. 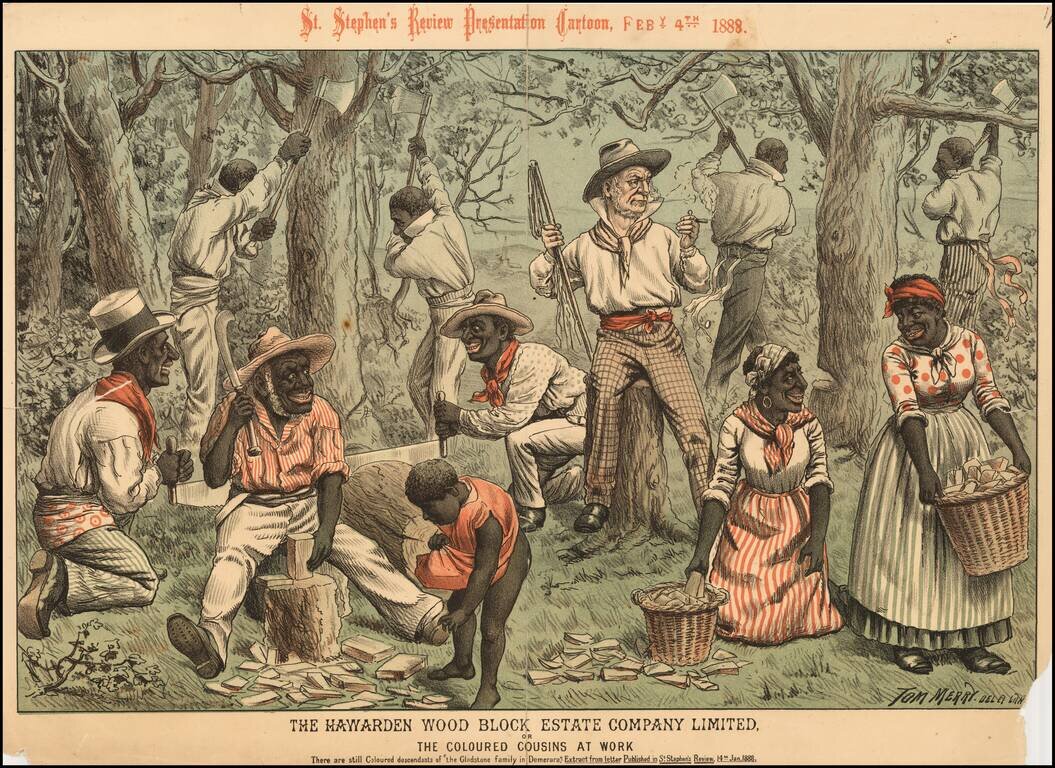 The Hawarden Wood Block Estate Company Limited, or The Coloured Cousins at Work