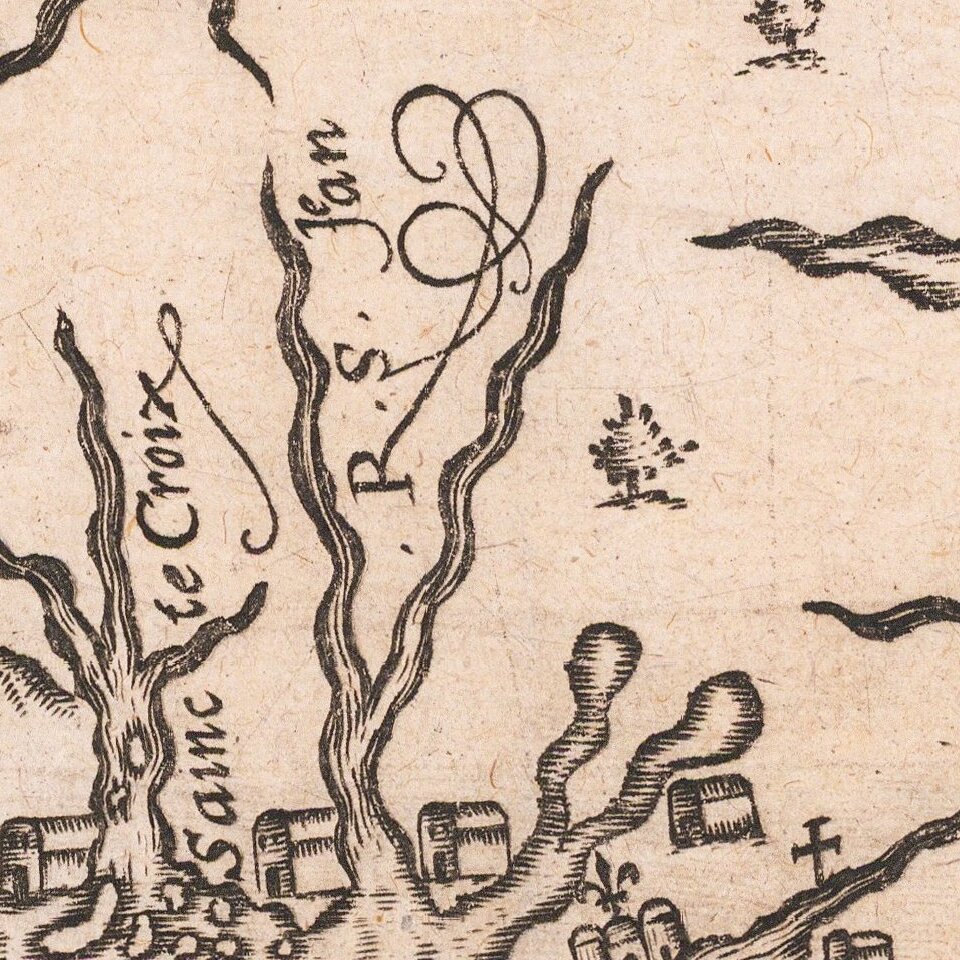 Lescarbot's seminal map is the first detailed map of Canada and New England (extending south to Cape Cod) based on a systematic exploration of the area.

The present example includes some early manuscript annotations around Newfoundland,

Although drawn primarily from a 1607 manuscript map by Champlain, Lescarbot's map appeared a 3 years prior to the first edition of Champlain's map. In addition, as pointed out in Mapping Boston, Lescarbot's was the first map to show Cape Cod. Also, several important place names appeared on the map for the first time, including Kebec (Quebec), Kinibeki (Kennebec), and P. Royal (Port Royal).

The map extends up the St. Lawrence River as far as the Indian village Hochelaga (now Montreal). The first trading post in Canada, founded in 1600 at Tadousac, is shown at the mouth of the R. de Saguenay and just next to that is the River Lesquemin mistakenly named in reverse. Kebec is shown here for the first time on a printed map in its Micmac form, meaning the narrows of the river. The New England coastline on this map closely follows Champlain's manuscript of the area which is dated 1607, and now resides at the Library of Congress (Burden 157). Lescarbot records Champlain's explorations in 1605 and 1606 along the eastern seaboard of North America as far south as Cape Cod, specifically Stage Harbor in Chatham. The purpose of this voyage was to scout the warmer locales south of the St. Lawrence River for advantageous areas for settlement. In so doing, Champlain remained for some time at places that showed promise, especially those with good harbors, and sketched charts of these areas in some detail.

Lescarbot was a Protestant lawyer who spent more than a year in America as part of the expedition that founded Port Royal in Nova Scotia, arriving in 1606. The book was published to encourage settlement in the New World. During the second New England voyage Lescarbot was left in charge of the Port Royal colony.

The map is known in two states: