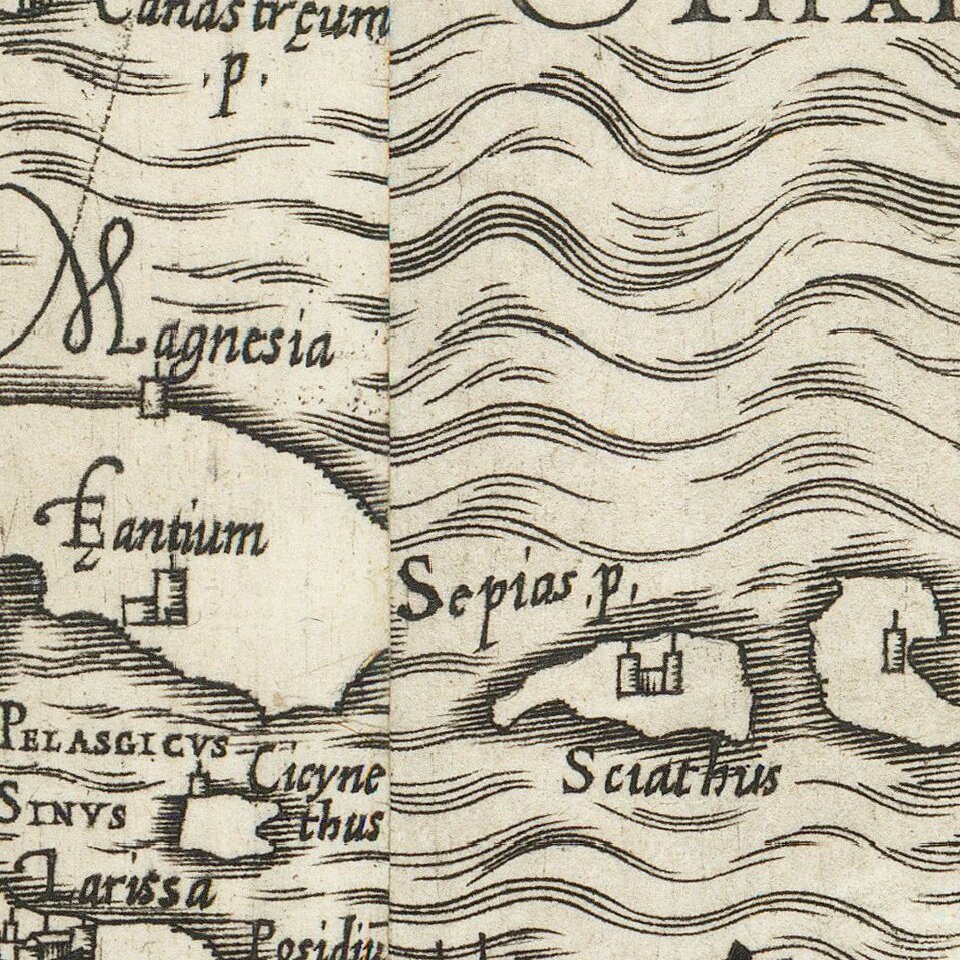 Nice example of Antonio Salamanca's 1558 map of Greece, based upon Nikolaos Sophianos's landmark 8-sheet map of Greece, from classical and modern authorities.

Antonio Salamanca's map of Greece is the earliest obtainable map based upon Nikolaos Sophianos's 8-sheet map of Greece, Totius Graeciae Descriptio, the most important and influential map of Greece of the sixteenth century.

Sophianos's wall map of the Greek territories from mythical times to the founding of the Eastern Roman Empire and the establishment of Christianity, was intended to promote the idea that Greece was an active component of the Christian and humanist legacy. For the scholarly elite of western Europe, the map represented "a visual digest of Greece."

Sophianos's map was first published in Rome in 1540. The map presented a historical cartographical panorama of the Greek world and was a major repository of antiquarian information about Greece. It was reissued frequently, being copied and plagiarized, for some forty years after its initial publication, until it was finally standardized by inclusion in Ortelius's historical atlas, the Parergon, in 1579.

Sophianos's map of Greece was created during his residence in Rome (1540-1542). The first edition of Sophianos's map has been lost. Consequently, the map's publishing history is based on indirect literary allusions and evidence from surviving copies of later editions, especially those reissued first in Basel (1545) and then in Rome (1552). Whether the Rome map was a woodcut, like the 1545 Basel version, or a copperplate, like the edition printed in Rome in 1552, is not known.

Sophianos's colleague, Arnoldus Arlenius, took Sophianos's map to the Basel printer Oporin. Oporin's edition was first printed in 1544 and again in 1545. Both Oporin's issues were believed lost until 1975, when Ernst Meyer discovered an example of the 1545 edition in the National Library of Greece. Another, badly damaged copy resides in the Library of Congress, where it was first identified in 1958. In 2004, a complete example of Oporin's 1545 map was offered by Sotheby's in London.

It is believed that the Basel issues of the map (1544 and 1545) were close copies of the 1540 Rome edition. Sophianos accompanied his map with a table of concordance of ancient and modern place-names. This document contains 276 ancient place-names with their modern equivalents or variants. The modern names are mainly from contemporary portolan charts and the variants are drawn from classical and medieval sources. Latin variants came from such authors as Virgil and Livy, and Greek variants mainly from the Byzantine scholars Eustathios of Thessaloniki and Stephanus of Byzantium.

The 1545 Oporin map, Descriptio Nova Totius Graeciae . . . is also in 8-sheets, with a dedication to Cosimo de' Medici. Sophianos names his sources and explains the dotted boundary lines that indicate the provinces, regions and tribes. He then gives a list of other geographical features shown on the map.

In 1545, a 2 sheet version was published in Venice by Giovanni Andrea Vavassore. The geographical features are similar to Oporin's 1545 edition. Vavassore maintained the bilingual (Greek and Latin) labelling of regions and seas, but, omits many of the vignettes. Sophianos may have initiated the Vavassore edition since he was resident in Venice. In 1552, Vavasore issued an enlarged 4 sheet edition of the map. A number of differences between Oporin's 1545 woodcut and this new copperplate stand out. The title of the map, Totius Graeciae Descriptio, is at the bottom of the map, in the center of the frame, and not at the top of the map, and the date is now styled in Roman numerals. The scale bar that Oporin added to the map is lacking, but a double scale bar is found in the border (bottom left).

The 1552 Vavassore edition appears to have been from the 1540 Rome plates. There are notable corrections made to the 1552 edition, which can be seen in the engraving process. The corrections concern the island of Zante. The coastline has been placed farther out in the sea and new hill signs have been added, but the old coastline and stippling of the former area of sea have not been erased.

The first copy of the map was produced by the Rome publisher Francesco Salamanca. It is likely based on the 1552 Rome reissue by Antonio Blado, since it includes the vignettes of Athens and Constantinople, and the illustrations of the ancient monuments. Salamanca's edition was copied in Rome by Vincenzo Luchini, in 1558. Subsequently, it was reproduced by Paolo Forlani (1562), Fernando Bertelli (1564), Giovanni Francesco Camocio (1566), and Donato Bertelli (1569) and reissued in Rome by Antonio Lafreri (1570) and Claudio Duchetti (after 1570). In 1579, a one-sheet example was included in Abraham Ortelius's Parergon. Finally, in 1601 in Basel, Johannes Schroeterus printed the last woodcut edition of Sophianos's map of Greece from Oporin's blocks.

Sophianos's map is based initially on Ptolemy. The shape of the coastlines, network of rivers, and division of Greece all Ptolemaic. Sophianos revised many details, including outlines of Corfu, Cephalonia, and Zante in the Ionian Sea, the southern coastline of the Peloponnese, and the size and the arrangement of the Cyclades in the Aegean Sea.

Sophianos also departed from Ptolemy by following the ancient Greek geographers. Whereas Ptolemy's Greece extended northward to Epirus and Macedonia, on Sophianos's map Greece covers the Balkans south of the Danube as well as western Asia Minor. Another innovation is the number and chronological range of place-names. Ptolemy limited his work to second-century names. Sophianos included names from all of ancient Greek history. Sophianos names about two thousand places, drawn from a variety of sources, double those shown by Ptolemy. These derive from Greek historians and geographers such as Herodotus, Thucydides, Strabo, and Pausanias, as well as more recent maps and charts.

It is interesting to find Pausanias's antiquarian description, a source unexploited by earlier scholars, cited among Sophianos's main references.

Sophianos's map includes place-names from the Argonauts and the Trojan War (12th Century BC) to the late Roman period (4th Century AD). It was expected that the user of the original map would locate medieval and modern places by using the separate concordance of 276 names. On the map, place-names are in their Hellenized Latin form, with Roman letters spelling the Greek names. Ancient Greek and Roman monuments from Pausanias, Strabo, Pliny are shown.

Sophianos was born in Corfu circa 1500 and educated in Rome at the Quirinal College. This training is reflected in the map, which includes information from Markos Mousouros's Editio Princeps of Pausanias's Description of Greece (Venice, Manutius, 1516) and Janus Laskaris's correction of the commentaries on Homer by Eustathios of Thessaloniki (d. c.1194).

After leaving the Quirinal College, Sophianos became a librarian in Rome. Between 1533 and 1540 he settled in Venice and worked as a copyist and a dealer in old Greek manuscripts. In 1540, Antonio Blado, the Vatican's official printer, invited Sophianos to design a Greek font for the new Greek press established in the Vatican. During this time, it is almost certain that the first edition of Sophianos's 8-sheet map of Greece was engraved and printed by Blado.

Sophianos moved to Venice in the middle of 1542, when his collaboration with Blado ended in litigation. Following a return from Greece, Sophianos established a Greek press in Venice, which operated from 1544 to 1545. Sophianos's publishing activities ceased after 1545. In 1551 Sophianos's dispute with Blado was resolved when Sophianos awarded 125 gold ducats for the design of the Greek fonts. 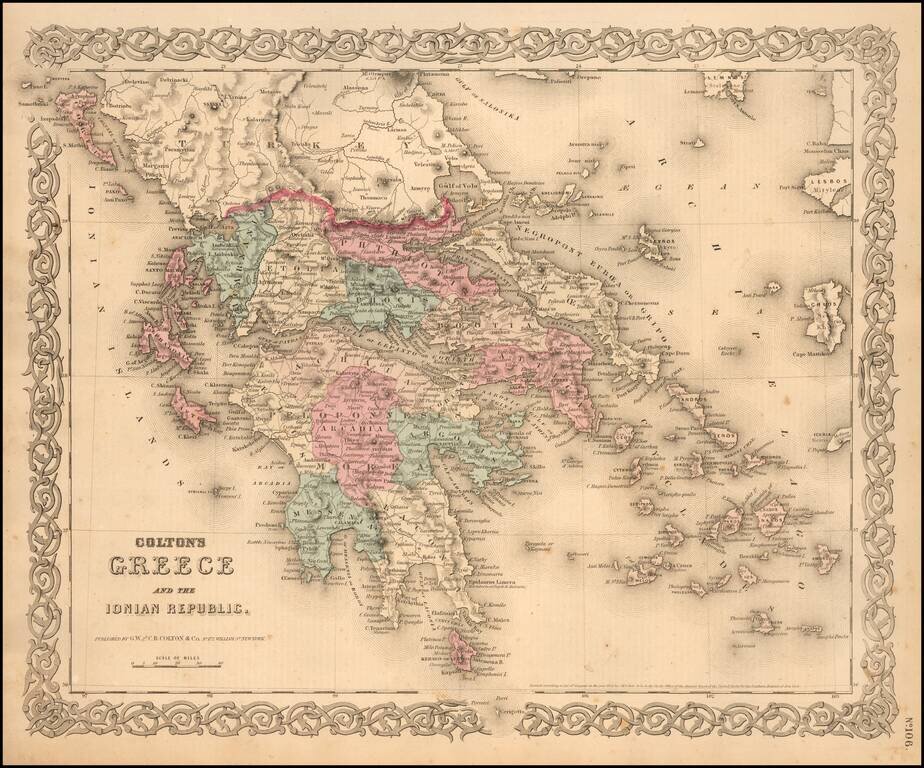 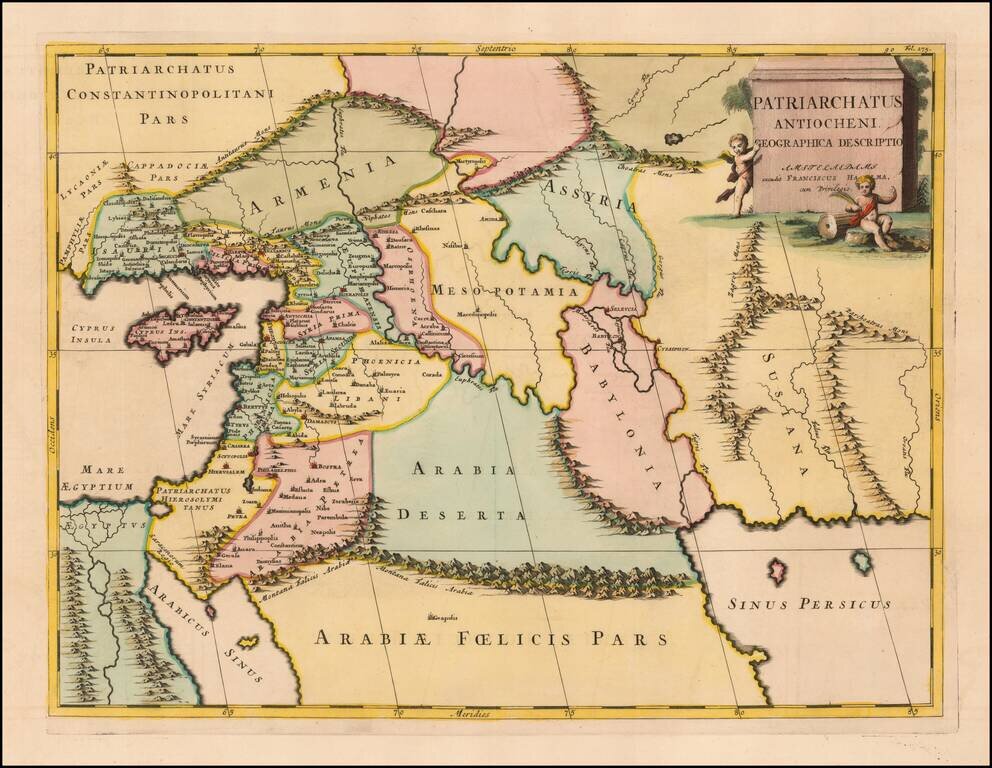 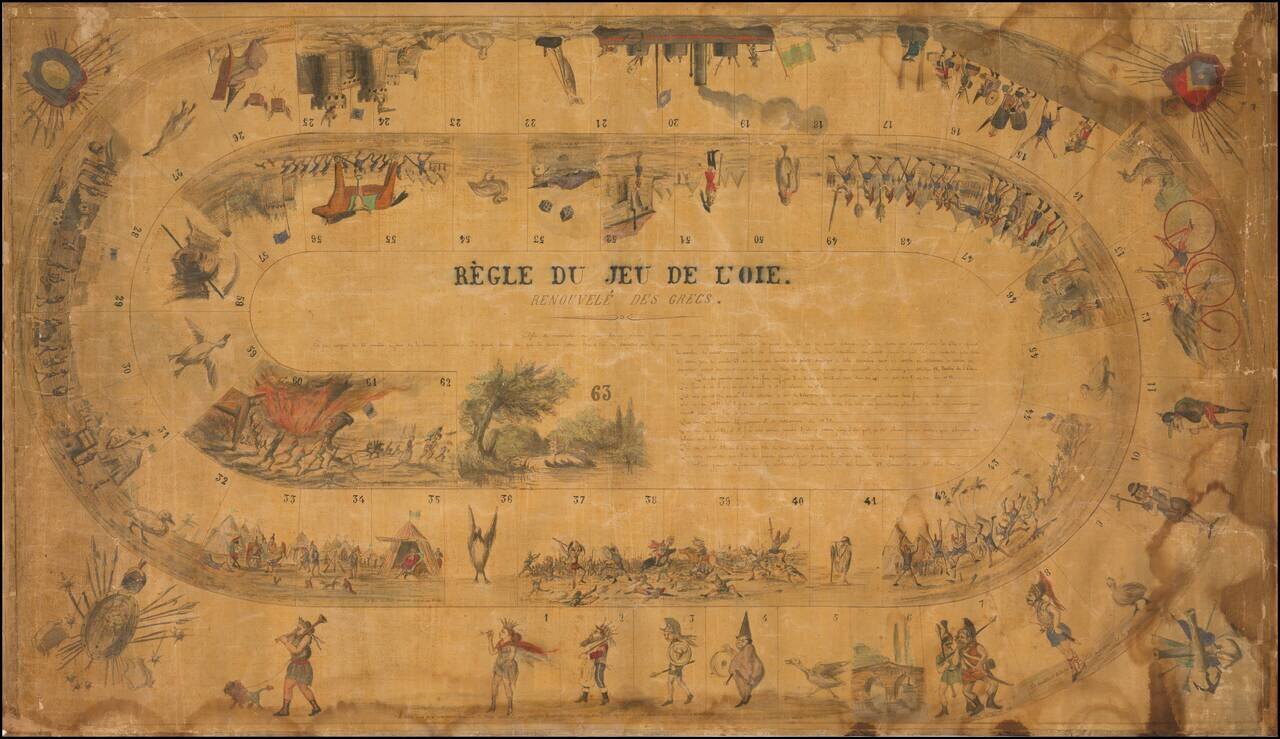