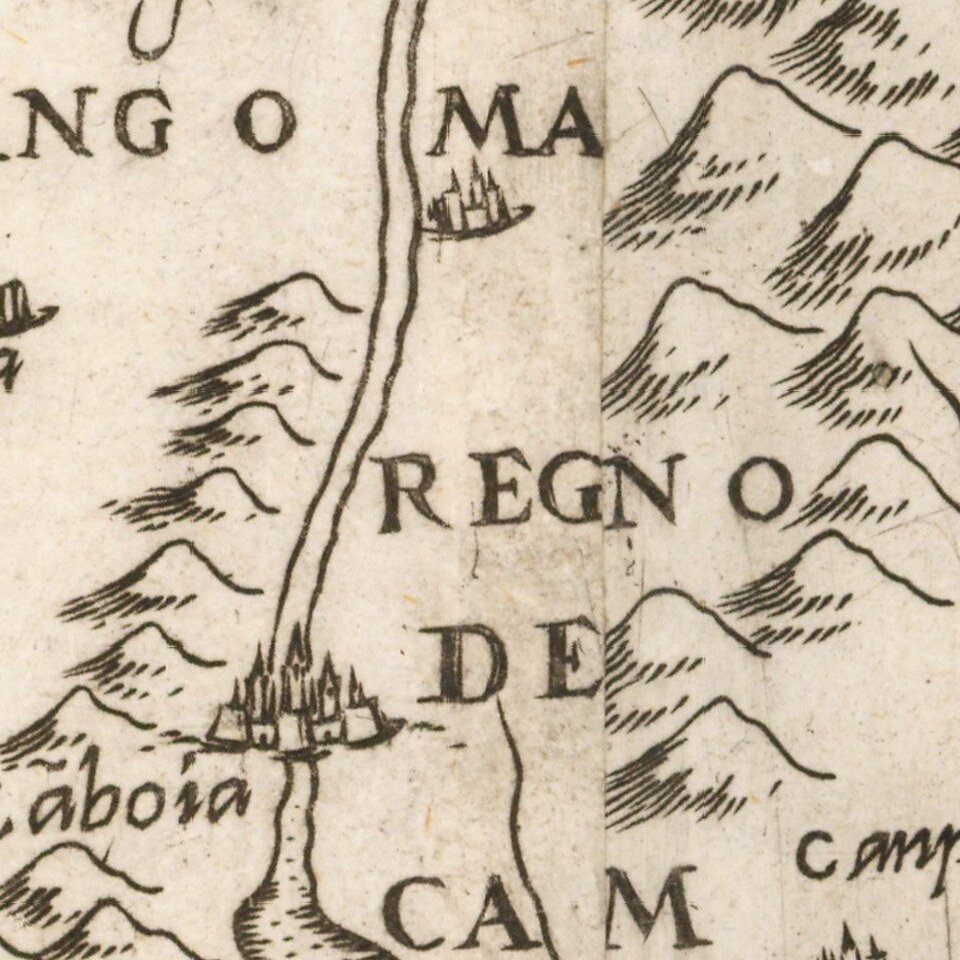 Fine example of Giacomo Gastaldi's rare 4-sheet wall map of Southeast Asia, China and India, perhaps the single most influential map of the region published in the 16th Century.

Gastaldi's map of Southeast Asia has a remarkable history, one that presents a microcosm of Italian mapmaking in the middle of the 16th Century. The map begins with the publication of a single section in 1559, which was intended as a separate map. Additional sections were added in 1561, creating the portion of the existing map which extends south to the Equator. In 1565, two additional sections were added, in order to show all of Indonesia and neighboring islands as far south as Java Minor.

As noted by Suarez:

In its original form the map extended only to the equator, so that most of the Indonesian islands were not included. To remedy this, in about 1565, two narrow sheets were made by the great Italian engraver Paolo Forlani to supplement the main body of Gastaldi's map... This lower addition bears an inscription in the lower left corner which reads 'si vende...'... indicating the location of the shop of the publisher Bertelli.

Suarez furthermore describes at length the sources and innovations used by Gastaldi for all of his Asian continental maps, but foremost the three-sectional map "had a major influence on the work of Ortelius and de Jode... In their representation of the coastlines his maps are superior to all previous known maps of Asia, either drawn by hand or printed" (Schilder in The Map Collector no. 17, p. 7).

On the right hand side of the map, Gastaldi provides a list of about 100 place names on the map, showing both the ancient and modern names for these places. In his excellent study of Gastaldi's maps of Asia and their relationship to the accounts of Marco Polo's travels, Nordinskold notes that while Gastaldi has clearly incorporated information from Marco Polo's travels, Gastaldi has relied upon the accounts of other contemporary travellers to the east. Most notably, the dedication to Marco Fuchero (Marcus Fugger, 1529-1597), is strong evidence that Gastaldi had been given access to the Fugger family library, one of the most important libraries compiled in the 15th and 16th Centuries. During the 16th Century, the Fugger Library was perhaps the best private library in the world, even better than the Vatican Library.

Nordinskold goes on to note:

Finally, it must be remembered that Gastaldi, under the guidance of Ramusio, is supposed to have aided in repairing or repainting the famous wall-maps in Sala dello scudo in Venice . . . If such was the case, it may be considered probable that the monumental maps of Africa and Asia by Gastaldi have had some connection to [Gastaldi's map of Asia], that these copper-plate engravings are a reproduction of the originals of the wall maps in that form which was given them in the middle of the sixteenth century.

The present example is a rare variant edition, bearing the imprint of "Petri de Nobilibus Formis." Pietro de Nobilis was a successor of Lafreri in Rome after 1580. In Tooley's work on Italian Atlases, he located only a single example of the this map of Southeast Asia which included the Petri de Nobilibus imprint, a copy owned at the beginning of the 20th Century by the famous American collector George Beans.