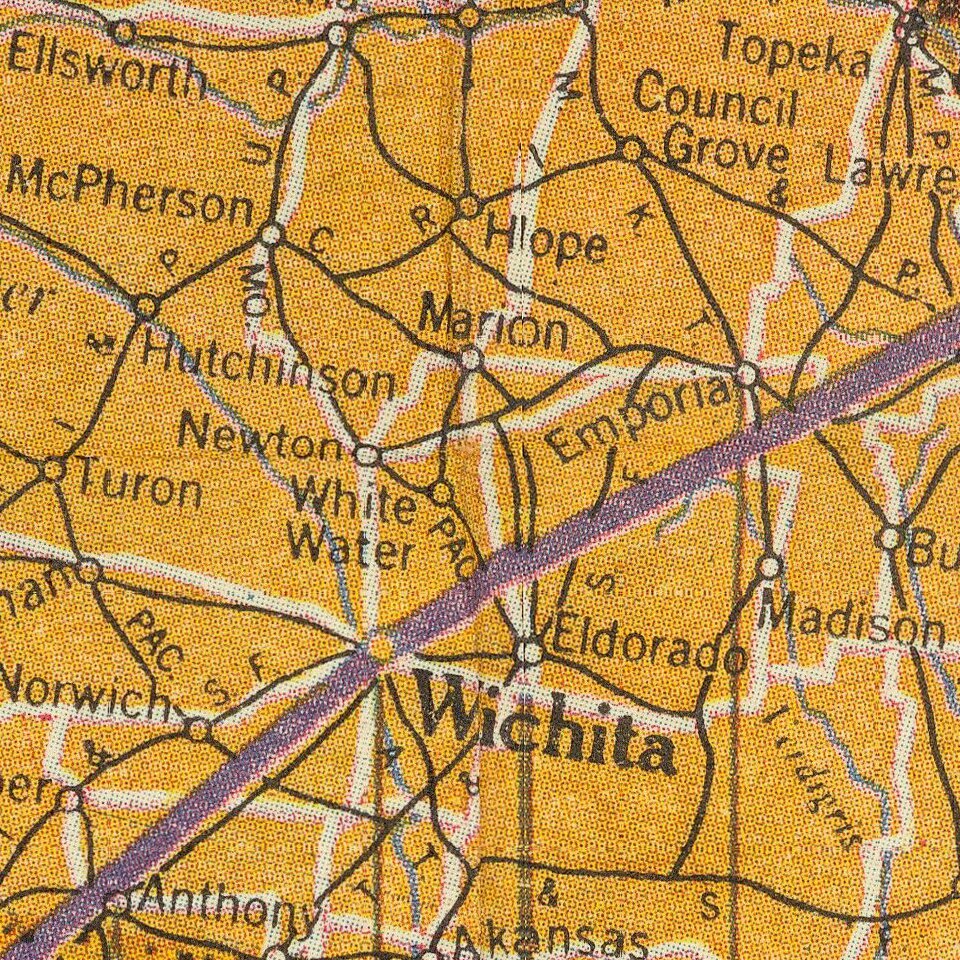 On the verso is flight log and a weather map of the route, clearly intended to inspire passenger confidence, which, as it turns out, would have been misplaced. Beginning on September 3, 1929, TAT would endure three serious accidents over the next five months. The New York Times declared the September 3 accident “the first great tragedy on a national air route since giant passenger planes became a mode of transcontinental travel.”

The TAT had its own weather bureau and relied on other weather observers as well. This second map identifies various weather reporting stations with red dots. A key at the lower right identifies these as Pennsylvania Railroad observers, Santa Fe observers, T.A.T. observers, and U.S. Weather observers. The company's teletype and radio systems at each of these locales provided pilots with an exact picture of weather conditions along the line of flight, as explained in the accompanying text.

Transcontinental Air Transport (TAT) was founded in 1928 by Clement Melville Keys (1876–1952) and merged in 1930 with Western Air Express to form Transcontinental & Western Air (T&WA), which later became Trans World Airlines (TWA). In the 19'20s Keys hired Charles Lindbergh to design a transcontinental network to receive government airmail contracts. To this end, Lindbergh established a number of airports across the country, and in July 1929, transcontinental trips commenced. Passenger service was added as well.

The TAT, whose slogan was "Harnessing the Plane and the Iron Horse," initially offered a 51-hour train-cum-plane trip with several change-overs beginning in New York City and terminating in various destinations such as Albuquerque, Winslow, Az., Los Angeles, and San Francisco. A one-way trip from New York to Los Angeles cost $338.

The TAT was one of the first airline companies to offer passenger service.

Rand McNally & Co. is a large American map and navigation company best known for its annual atlases. The company got its start in 1856, when William Rand opened a print shop in Chicago. He was joined in 1858 by a new employee, Andrew McNally. Together, the men established their namesake company in 1868. Originally, the company was intended to print the tickets and timetables for the trains running to and through Chicago; their first railway guide was published in 1869.

By 1870, they had shifted from just printing to publishing directories, travel guides, and newspapers. Their first map appeared in 1872 in a railway guide. The map was produced using a new wax engraving method, a cheaper process that gave the company an edge.

By 1880 Rand McNally had entered the education market with globes, wall maps, and geography texts for students. In 1923, Rand McNally published the first Goode’s World Atlas, named after its editor, Dr. J. Paul Goode. For generations afterward, this would be the standard classroom atlas.

In 1899, William Rand left the company, but McNally and his family remained, controlling the company for over a century. In 1904, they published their first road map intended for automobiles and by 1907 were publishing Photo-Auto Guides, which combined photography and mapping to help drivers. In 1924, they produced the Auto Chum, a precursor to their famous road atlases. Rand McNally would remain the leader in road maps and atlases throughout the twentieth century.

In 1937, Rand McNally opened its first store in New York City. Ever on the frontier of technology, Rand McNally pioneered the scribing process for printing tickets in 1958 and printed their first full-color road atlas in 1960. Arthur Robinson developed his now-famous projection of Rand McNally in 1969. By the 1980s, the company was exploring digital reproduction and digital databases of maps for truckers. In the 1990s, they lead the charge to develop trip-planning software and websites. Today, most of its products are available online or in a digital format, including maps for tablets and phones.