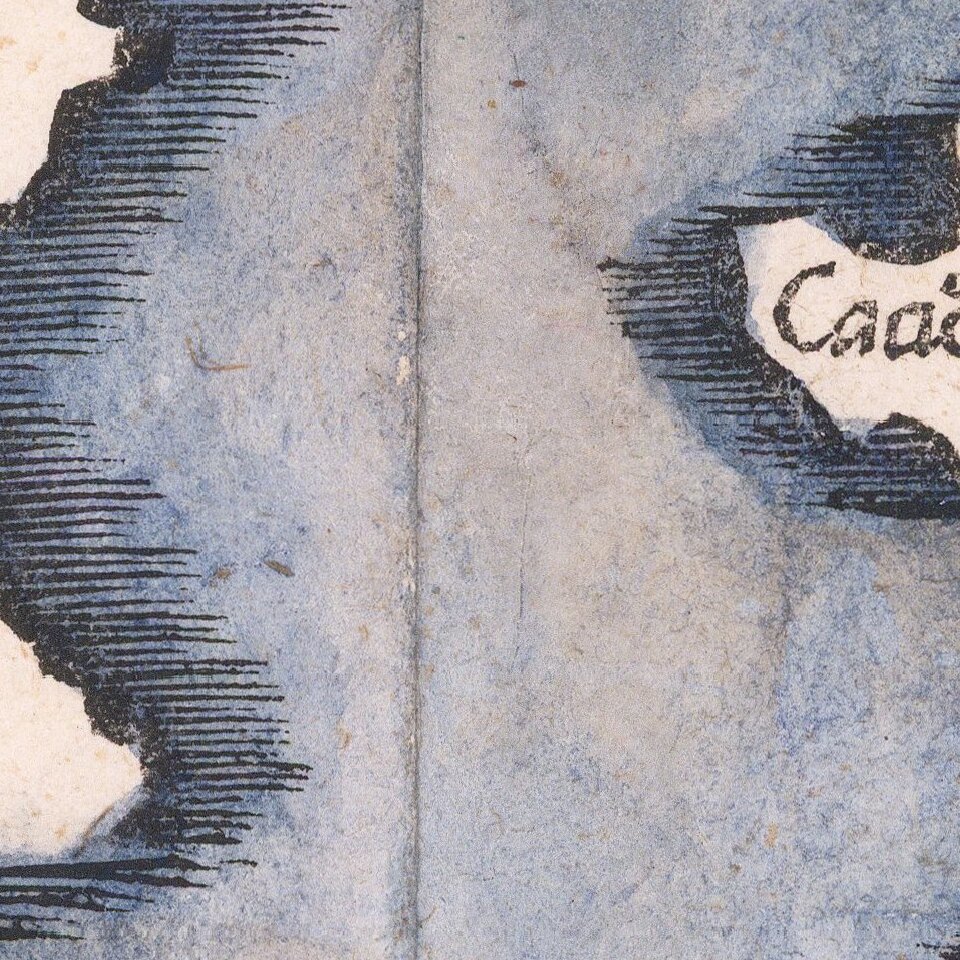 Fries' map was a significant milestone in the Mapping of Southeast Asia. The map shows Lake Chiang Mai, which feeds one of the region's principal rivers. The cartography is based upon Waldseemuller's 1507 cordiform map, which derived its treatment from Martellus. The map abandons the Ptolmaic model in several respects, most notably the closed Indian Sea.

Much of the map's nomenclature is derived from Marco Polo's adventures. Java Major is mapped solely from anecdotal reports. Peutam (Binan) is recorded in the 13th Century treatise of Ibn Sa'id. Java Minor is correctly placed below Peutam. Fries' treatment of Sumatra is also much more accurate than the maps of Waldseemuller, et al. Ferlec is shown opposite Bintam, based upon Marco Polo's account that it was located 100 miles to the south. Basma is also shown on the northern coast.

In the Mapping of Southeast Asia, Tom Suarez spends several pages illustrating and describing the minute detail in the map and reconciling it against the works of early travelers and prior maps, calling this map a landmark in the cartography of southeast Asia.

Unlike most maps in Fries' atlas, this map is not based upon an earlier map by Waldseemuller and is an entirely original production.

Lorenz (Laurent) Fries was born in Alsace in about 1490. He studied medicine, apparently spending time at the universities of Pavia, Piacenza, Montpellier and Vienna. After completing his education, Fries worked as a physician in several places, before settling in Strassburg, in about 1519. While in Strassburg, Fries met the Strasbourg printer and publisher Johann Grüninger, an associate of the St. Die group of scholars formed by, among others, Walter Lud, Martin Ringmann, and Martin Waldseemuller.

From 1520 to 1525, Fries worked with Gruninger as a cartographic editor, exploiting the corpus of material that Waldseemuller had created. Fries' first venture into mapmaking was in 1520, when he executed a reduction of Martin Waldseemuller's wall-map of the World, published in 1507. While it would appear that Fries was the editor of the map, credit is actually given in the title to Peter Apian. The map, Tipus Orbis Universalis Iuxta Ptolomei Cosmographi Traditionem Et Americ Vespucii Aliorque Lustrationes A Petro Apiano Leysnico Elucubrat. An.o Dni MDXX, was issued in Caius Julius Solinus' Enarrationes, edited by Camers, and published in Vienna in 1520.

Fries' next project was a new edition of the Geographia of Claudius Ptolemy, which was published by Johann Koberger in 1522. Fries originally intended for the maps included in this work to be part of a new Chronica Mundi being written by Martin Waldseemüller, whose death, circa 1520, caused the project to be shelved. Instead, Fries used his woodcut maps to publish a smaller sized edition of Waldseemüller's Geographia, which was first published in Strasbourg by Johannes Gruninger in 1522. Fries evidently edited the original Waldseemuller maps, in most cases simply producing a reduction of the equivalent map from Waldseemuller's 1513 edition of the Geographie Opus Novissima, printed by Johann Schott.

Fries also prepared three new maps for the Geographia: maps of South-East Asia and the East Indies, China and the World. The cartographic details for these 3 modern maps derives from Waldseemuller's world map of 1507, which Fries had viewed and copied prior to 1520, utilizing this information for the preparation of the 1520 Apian World map identified above.

The 1522 edition of Fries' work is very rare, suggesting that the work was not commercially successful. In 1525, an improved edition was issued, with a re-edit of the text by Wilibald Pirkheimer, from the notes of Johannes Regiomontanus. After Grüninger's death in 1531, the business was continued by his son Christoph, who seems to have sold the materials for the Ptolemy to two Lyon publishers, the brothers Melchior and Gaspar Trechsel, who published a joint edition in 1535, before Gaspar Trechsel published an edition in his own right, in 1541.