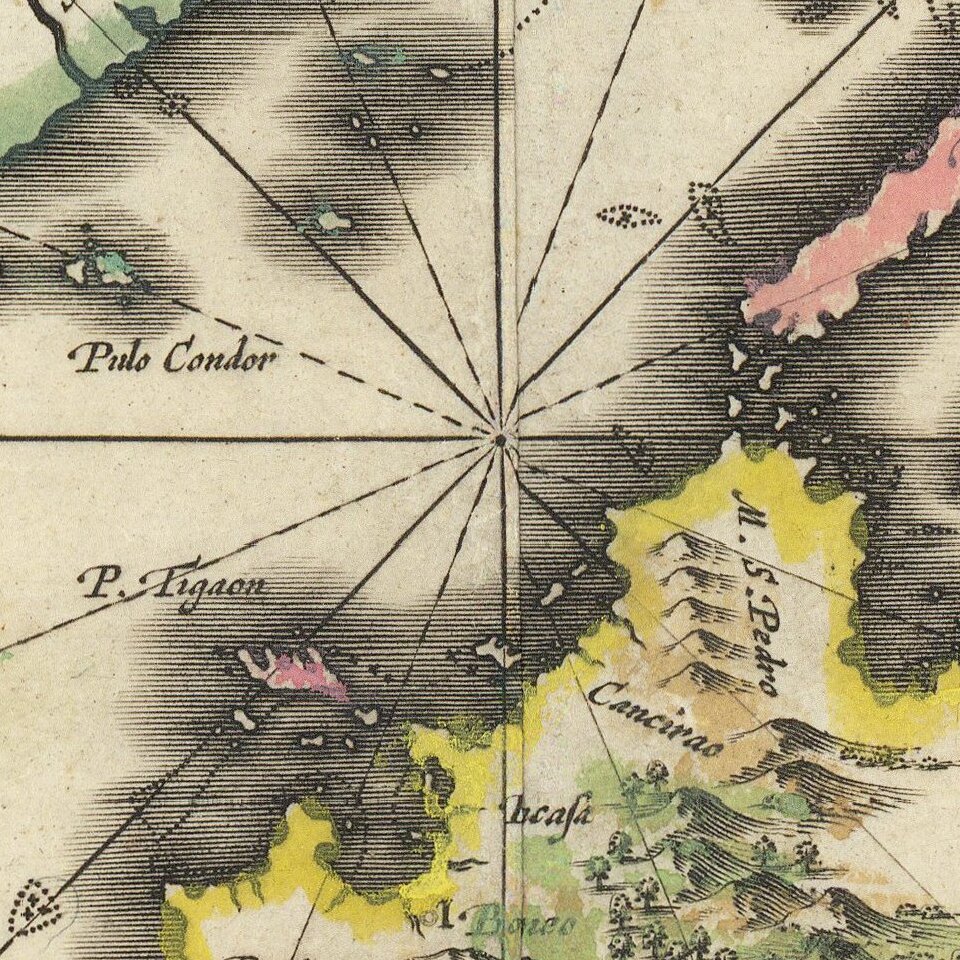 Wide margined, old color example of Blaeu's map of Southeast Asia, extending from India to Tibet to Japan to New Guinea. The map is richly embellished and is one of the best regional maps of the era.

The relatively-straight lines of the archipelagos of the Maldives and the Ladrones (Marianas) act as bookends to the map's geography. Japan is shown as horizontal, a common depiction in this period, and is far north, east of the Korean peninsula. Sri Lanka, or Ceilon as it is labeled here, is shown as round and quite large.

Decorations abound across the map. The waters are criss-crossed with rhumb lines radiating from decorative sixteen-point compass roses. Four lone ships sail the seas to the east and the south. A flotilla of three ships approach the Sunda Strait, while a sea monster surfaces near Sri Lanka. The title is guarded in its cartouche by an Asian man in a turban who is staring at a European man with a crown and shield.

In the lower left is another elaborate cartouche which holds a dedication. A coat of arms topped with a winged helmet and snakes intertwining around a flower is in the top center. To the left is a warrior woman with plumed helmet and shield. To the right is a man with a voluminous mustache and full suit of armor. Next to the cartouche are two cherubs, one holding an armillary sphere aloft while the other beats a drum.

The cherubs have more angelic companions in the lower right corner. Two are contemplating a compass and another brings a cross staff to two others pouring over a globe with dividers. The globe rests atop the scale.

The Dutch in the East Indies

Although the map shows much of Asia, at its center are the islands of Southeast Asia: Borneo, Sumatra, Java, Celebes, the Moluccas, and others. The Moluccas were the vaunted Spice Islands, originally the only source in the world for nutmeg, mace, and cloves. The Portuguese were the first Europeans to gain power in the region, trading for spices in the Moluccas and controlling the spice market in Europe.

The Dutch wanted in on the lucrative trade, but they also had to contend with the Portuguese. The first Dutch expedition, led by Cornelis de Houtman in 1595, avoided India, the Strait of Malacca, and the Moluccas-Portuguese strongholds-in favor of the Sunda Strait. This voyage is commemorated with the flotilla of ships on the map.

The Dutch set up their trade centers on the island of Java, at Bantam and, later, Batavia; both are labeled. After Houtman, the second Dutch expedition (1598-1600) quickly set sail for the East Indies. It was followed by five others; the Dutch merchants were eager to exploit the opportunity. In 1602, the most powerful of these merchants and the Dutch government, the States General, created the Dutch East India Company (VOC), a monopoly to control the East Indies trade.

The Dutch in Australia

Unfinished coastlines east and south of Java suggest the unknown lands still to be discovered by Europeans. Here, New Guinea is a long thing island with an open western edge. It is very close to another coastline that we now know is the York Peninsula in Australia. Although Torres had sailed through the strait now named for him in 1606, the Spanish government suppressed news of the voyage. As a result, for over a century mapmakers would link Australia and New Guinea.

The Dutch also kept geographic knowledge secret. However, Willem Blaeu was appointed as the VOC's official hydrographer in 1633, making him privy to the findings of VOC voyages. Here, the York Peninsula is based on the 1606 voyage of the Duyfken, commanded by Willem Jansz. Jansz surveyed the southeast coast of New Guinea and then turned south, along what he thought was continuous coastline, to contact the north of Australia. In 1623, Jan Carstensz followed the route of the Duyfken and continued into the Gulf of Carpentaria.

Further west, another unfinished coast line extends into the lower border of the map. It is labeled as G.F. de Wits landt, or De Wits' Land, which refers to the 1628 voyage of Gerrit Fredericsz De Wit to the western coast of Australia. Blaeu also would now about Dirk Hartog's 1616 observations of the west coast, Jan Edel's voyage farther south in 1619, and the Leuwin's 1622 cruise around the southwest corner of the continent. Pieter Nuyts also sailed along the south coast in 1627.

The Blaeu's and their atlases

Willem Janszoon Blaeu (1571-1638) was a prominent Dutch geographer and publisher. Born the son of a herring merchant, Blaeu chose not fish but mathematics and astronomy for his focus. He studied with the famous Danish astronomer Tycho Brahe, with whom he honed his instrument and globe making skills.

Blaeu set up shop in Amsterdam, where he sold instruments and globes, published maps, and edited the works of intellectuals like Descartes and Hugo Grotius. In 1635, he released his atlas, Theatrum Orbis Terrarum, sive, Atlas novus. He died in 1638.

Willem had two sons, Cornelis (1610-1648) and Joan (1596-1673). Joan trained as a lawyer, but joined his father's business rather than practice. After his father's death, the brothers took over their father's shop and Joan took on his work as hydrographer to the VOC. Later in life, Joan would modify and greatly expand his father's Atlas novus, eventually releasing his masterpiece, the Atlas maior, between 1662 and 1672.

The original proof state of this map was issued without cartouches in 1633. The second proof state, with cartouches but pre-dating the dedication information and some of the final cartographic additions, was issued in 1634. The finished map, with dedication, appeared in Blaeu's two-volume atlas from 1635 onward and was only revised in 1664. By then, it was no longer so accurate, but it was and is still considered a beautiful cartographic achievement.