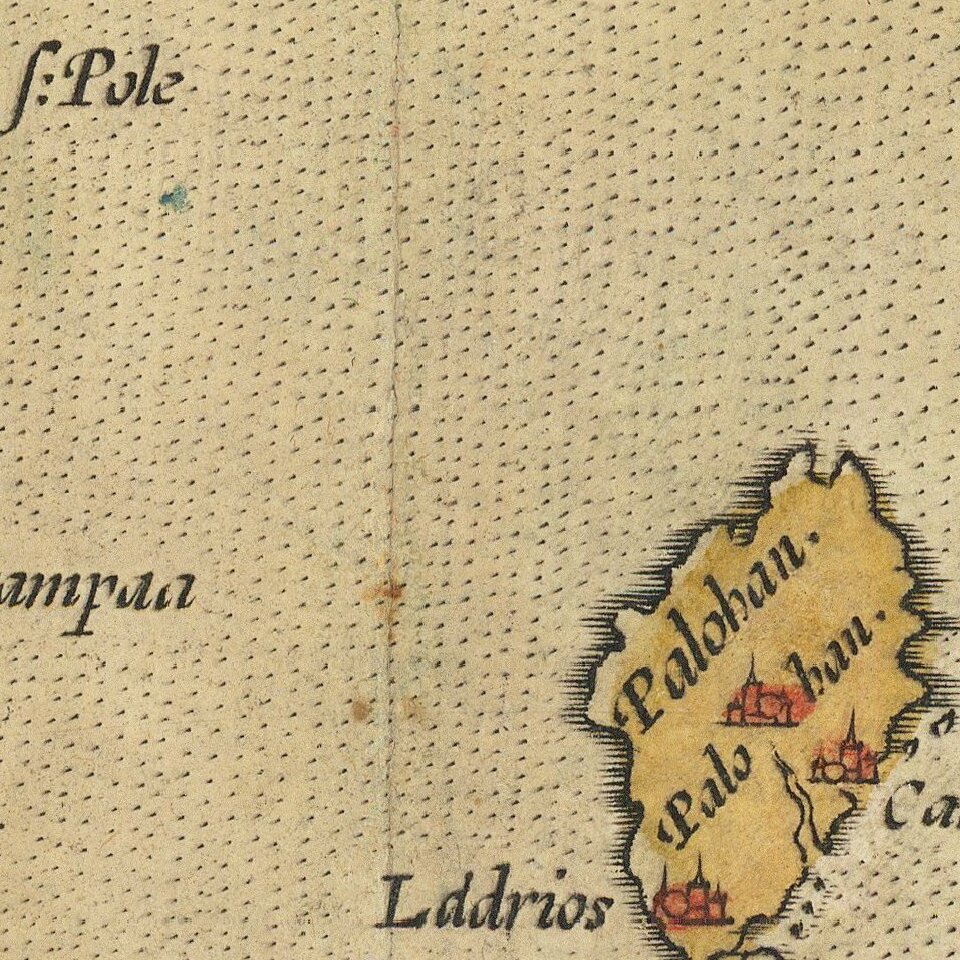 Ortelius' Map of Southeast Asia, from the World's First Atlas

Nice example of Ortelius' map of Southeast Asia, Japan, and the Philippines, etc., including a small section of the west coast of California. The map featured in Ortelius' Theatrum Orbis Terrarum, the first modern atlas of the world.

The map is focused on the islands that were then the obsession of Europe, the so-called Spice Islands that were rich with resources the Europeans wanted for trade. An inscription near the Moluccas explains, "Of the famous Moluccas islands there are next to Gilolo five, exporting all over the world a great abundance of fragrant spices, namely Tarenate, Tidore, Motir, Machia and Bachia."

Several inscriptions are included. Near New Guinea, which is shown as a large promontory, is the note, "New Guinea, which seems to be called Piccinaculus land by Andreas Corsalis. Whether this is an island or part of the South Land is uncertain." In the sixteenth century, as in the seventeenth and eighteenth, the southern continent was a near obsession for officials, explorers, and geographers. The existence of the continent was presumed because it was thought to balance the lands of the northern hemisphere.

New Guinea is not the only island to look odd to modern eyes. Sumatra and Java are also oversized. The Philippines are incomplete. However, this map still represented one of the most complete understandings of the region to date. It was based on Mercator's world map of 1569.

Finally, near the western border of the map, "The borders of Persia, or the empire of the Sophies, extend all the way to the river Indus." This note is interrupted by a coat of arms. At sea are several ships, a couple of sea monsters, and two mermaids sunning themselves. These figures are based on similar icons in the Diego Gutierrez map of America. The title cartouche is in the bottom left, surrounded by scroll work.

The Pacific is abbreviated, as the full extent of the ocean and longitudes of North America's western coastline was then unknown and a matter of speculation. On the coast of America is Quivira, which refers to the Seven Cities of Gold sought by the Spanish explorer Francisco Vasquez de Coronado in 1541. In 1539, Coronado wandered over what today is Arizona and New Mexico, eventually heading to what is now Kansas to find the supposedly rich city of Quivira. Although he never found the cities or the gold, the name stuck on maps of southwest North America, wandering from east to west.

In the far south of the map is an island peeking from the border. It is labeled Beach, which is a toponym that hails from Marco Polo. Beach, along with Lucach and Maletur, were regions in Java. As can be seen, Java maior is near to Beach. This conflation of Java with the southern continent stemmed from an error. Initially, Polo used Arabic usage of Java Major for Java and Java Minor for Sumatra. After a printing mistake made Java Minor seem the largest island in the world in the 1532 editions of Polo's Travels (Paris and Basel), mapmakers started to make a landmass to accommodate Java Minor, Beach, Lucach, and Maletur. The edge of this Terra Australis is shown here.

The influence of this and other Ortelius maps stems from the popularity and dominance of his atlas in the European market. In 1570, Ortelius published the first modern atlas; that is, a set of uniform maps with supporting text gathered in book form. Previously, there were other bound map collections, specifically the Italian Lafreri atlases, but these were sets of maps-not necessarily uniform-selected and bound together on demand.

Theatrum Orbis Terrarum, Ortelius' atlas, outperformed competing atlases from other cartographic luminaries like the Mercator family. Between 1570 and 1612, 31 editions of the atlas were published in seven languages.