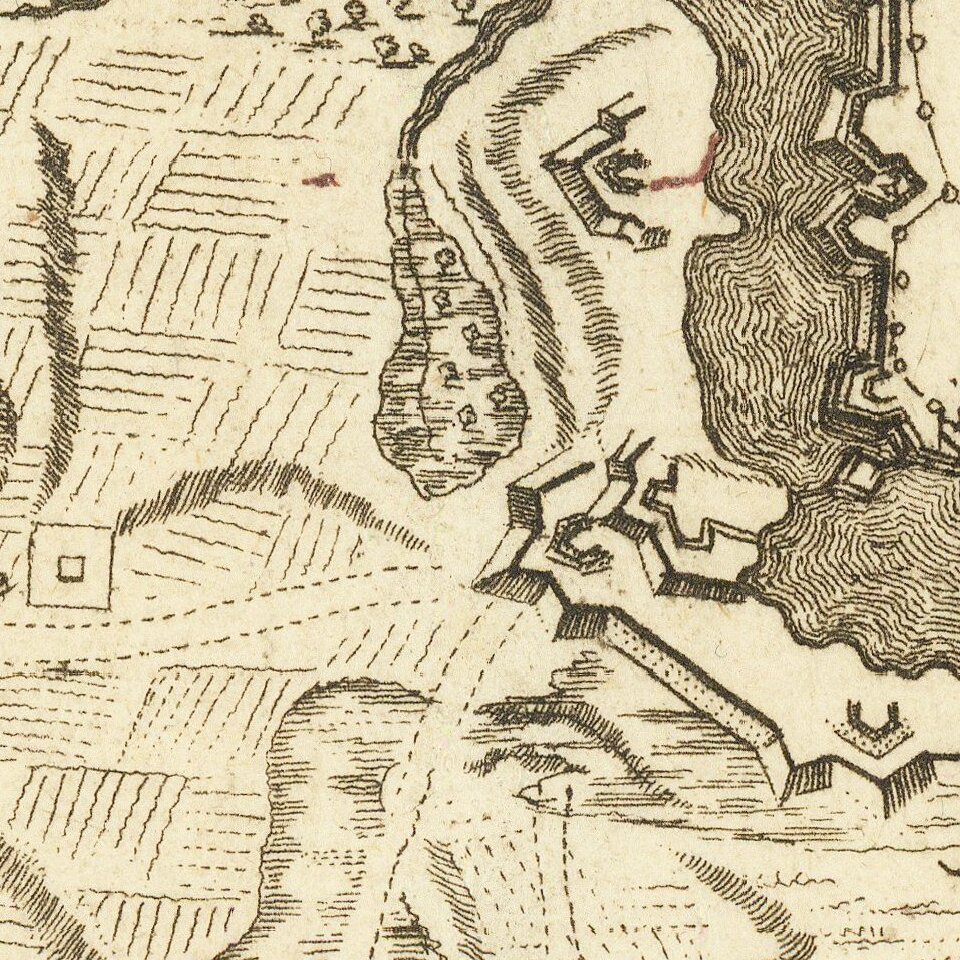 A series of nine current event broadsides, most notably the image showing the English battling Indians in the Carolinas at the top left.

The Carolina image shows a Dutch view of the Yamasee War. The full title, translated from the Dutch, reads "The gruesome attack of the Indians on the English, in Carolina, West Indies, on 19 April 1715 and some days after, in which action the barbarians tortured many men."

The Yamassee War was a conflict fought in South Carolina from 1715–1717 between British settlers from the Province of Carolina and the Yamasee and a number of other allied Native American peoples, including the Muscogee, Cherokee, Catawba, Apalachee, Apalachicola, Yuchi, Savannah River Shawnee, Congaree, Waxhaw, Pee Dee, Cape Fear, Cheraw, and others. Some of the Native American groups played a minor role, while others launched attacks throughout South Carolina in an attempt to destroy the colony.

Native Americans killed hundreds of colonists and destroyed many settlements, and they killed traders throughout the southeastern region. Colonists abandoned the frontiers and fled to Charles Town, where starvation set in as supplies ran low. The survival of the South Carolina colony was in question during 1715. The tide turned in early 1716 when the Cherokee sided with the colonists against the Creek, their traditional enemy. The last Native American fighters withdrew from the conflict in 1717, bringing a fragile peace to the colony.

The Yamassee War was one of the most disruptive and transformational conflicts of colonial America. For more than a year, the colony faced the possibility of annihilation. About seven percent of South Carolina's settlers were killed, making the war one of the bloodiest wars in American history. The Yamasee War and its aftermath shifted the geopolitical situation of both the European colonies and native groups, and contributed to the emergence of new Native American confederations, such as the Muscogee Creek and Catawba.

The origin of the war was complex, and reasons for fighting differed among the many Indian groups that participated. Factors included the trading system, trader abuses, the Indian slave trade, the depletion of deer, increasing Indian debts in contrast to increasing wealth among some colonists, the spread of rice plantation agriculture, French power in Louisiana offering an alternative to British trade, long-established Indian links to Spanish Florida, power struggles among Indian groups, and recent experiences in military collaboration among previously distant tribes.

The image is very rare. This is the first time we have ever seen the view, which is largely unrecorded, although we note an example at Swann Auction galleries in 2011.

Peter Schenk the Elder (1660-1711) moved to Amsterdam in 1675 and began to learn the art of mezzotint. In 1694 he bought some of the copperplate stock of the mapmaker Johannes Janssonius, which allowed him to specialize in the engraving and printing of maps and prints. He split his time between his Amsterdam shop and Leipzig and also sold a considerable volume of materials to London.