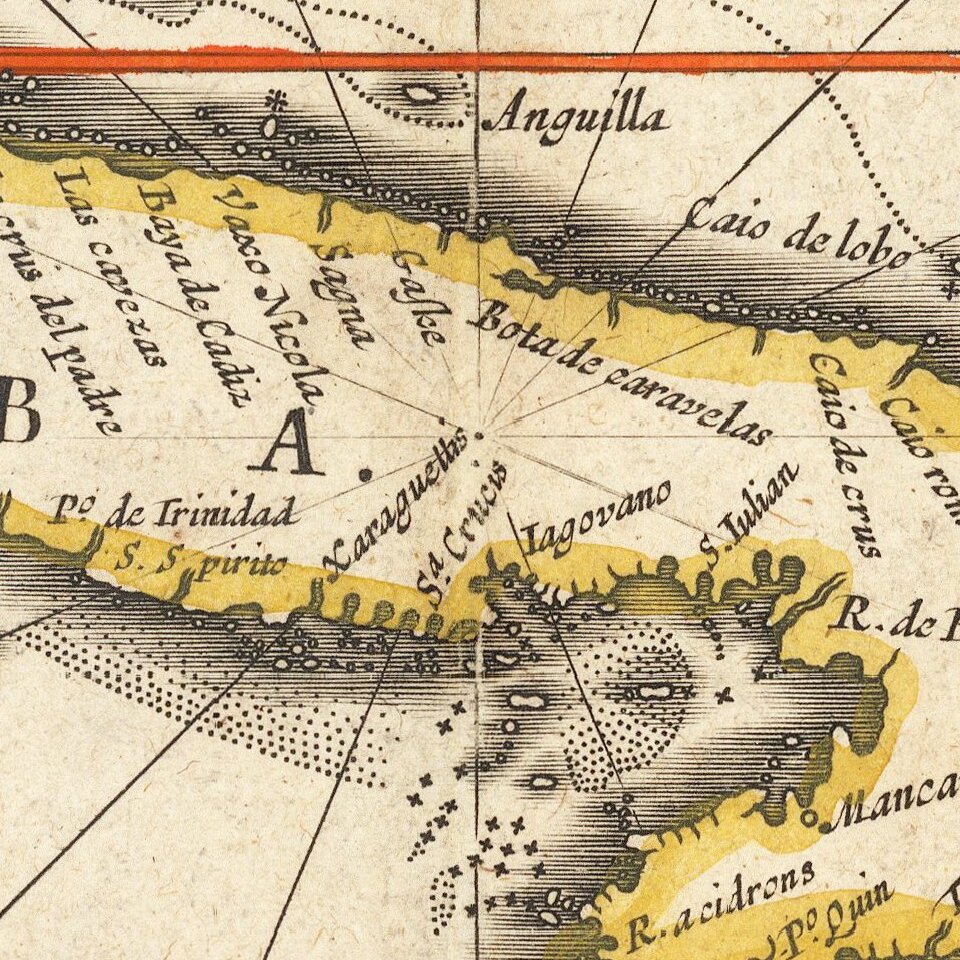 Blaeu's Chart of the Caribbean

Nice example of Blaeu's chart of the Caribbean, based on a section of Blaeu's own West Indische Paskaert (ca. 1630) and Hessel Gerritsz' rare chart of 1631. The chart was the most accurate for its time and was used throughout the seventeenth century.

The chart covers practically the same area as the Gerritsz chart, but adds the west coast of Central America and the South Sea ( Mare del Zur). Although this western coast is shown on the chart, there are no place names there. Every other coast is detailed in its toponyms, reflecting the advanced nature of European colonialism in the mid-seventeenth century. The place names in Florida and what is now the US Gulf Coast are mostly Spanish in origin, suggesting the use of a hard-to-get Spanish chart for that section.

The place names along the coast of eastern North America are practically identical to the Gerritsz chart, other than the important addition of Virginia here. According to Burden, Blaeu also accurately shows the distance between Chesapeake Bay and Albemarle Sound to be only 1°, whereas many contemporaries show them a further distance from each other.

The coastlines are colored decoratively, not to reflect political boundaries. The map is embellished with several other aesthetic details that make it distinctive to other charts of the area based on Gerritsz. A delicate scrolling script and rhumb lines fill the seas, as do five ships in full sail. The ships underline the region's importance to Europeans; it was a major center for trade, resources, and a site for forced labor.

The cartouches underline this emphasis on the bounty of the region. The title cartouche at the top is guarded by two putti. They hold aloft a long ribbon which serves as a tether for the exotic, to Europeans, animals of the New World: iguanas, snakes, bats, and turtles.

In the lower left corner is another cartouche, this one holding a dedication to Albert Conrad van der Burch, an Amsterdam politician and military officer. To the left is a woman standing in a flowing skirt, breasts barred, gazing away from the instruments she holds. Two snakes encircle her arm. To the right is another putto reading, perhaps a treatise on navigation. Two other putti are draped over the scale in the lower right corner; one idly plays with a pair of dividers while the other jauntily holds a cross-staff.

Gerritsz and the hydrography of the trading companies

The chart was greatly influenced by Gerritsz's chart of 1631, as previously mentioned, which is because Blaeu succeeded Gerritsz in serving as hydrographer to the Dutch East India Company (VOC).

Hessel Gerritsz (1580-1632) served as the first hydrographer to the VOC, which was founded in 1602. Interestingly, he was apprenticed to Blaeu before striking out on his own. Prior to 1617, the Company had exclusive cartographic suppliers, a position that Gerritsz also filled. From 1617, he worked directly for the Company, enjoying access to their private archives that were kept secret from the public. Gerritsz also served as hydrographer to the West India Company (WIC) from 1621 and he sailed to South America and the West Indies in 1628. Details of this voyage are reflected in his and Blaeu's charts, particularly in the shape of the Florida peninsula, the Virginia coastline, and the northern Cuban coast.

Gerritsz died in 1632, leaving Blaeu to step into his vacant position at the VOC; a Blaeu family member would fill the post until 1705. The WIC did not replace Gerritsz with an official hydrographer, but they did use Blaeu as a supplier.

Willem Janszoon Blaeu (1571-1638) was a prominent Dutch geographer and publisher. Born the son of a herring merchant, Blaeu chose not fish but mathematics and astronomy for his focus. He studied with the famous Danish astronomer Tycho Brahe, with whom he honed his instrument and globe making skills.

Blaeu set up shop in Amsterdam, where he sold instruments and globes, published maps, and edited the works of intellectuals like Descartes and Hugo Grotius. In 1635, he released his atlas, Theatrum Orbis Terrarum, sive, Atlas novus. This map was part of that atlas and appeared in the Dutch, French, German, and Latin editions and was also included in later editions throughout the seventeenth century. Although the text was reset, the chart itself was unaltered.

Willem died in 1638. He had two sons, Cornelis (1610-1648) and Joan (1596-1673). Joan trained as a lawyer, but joined his father's business rather than practice. After his father's death, the brothers took over their father's shop and Joan took on his work as hydrographer to the VOC. Later in life, Joan would modify and greatly expand his father's Atlas novus, eventually releasing his masterpiece, the Atlas maior, between 1662 and 1672.