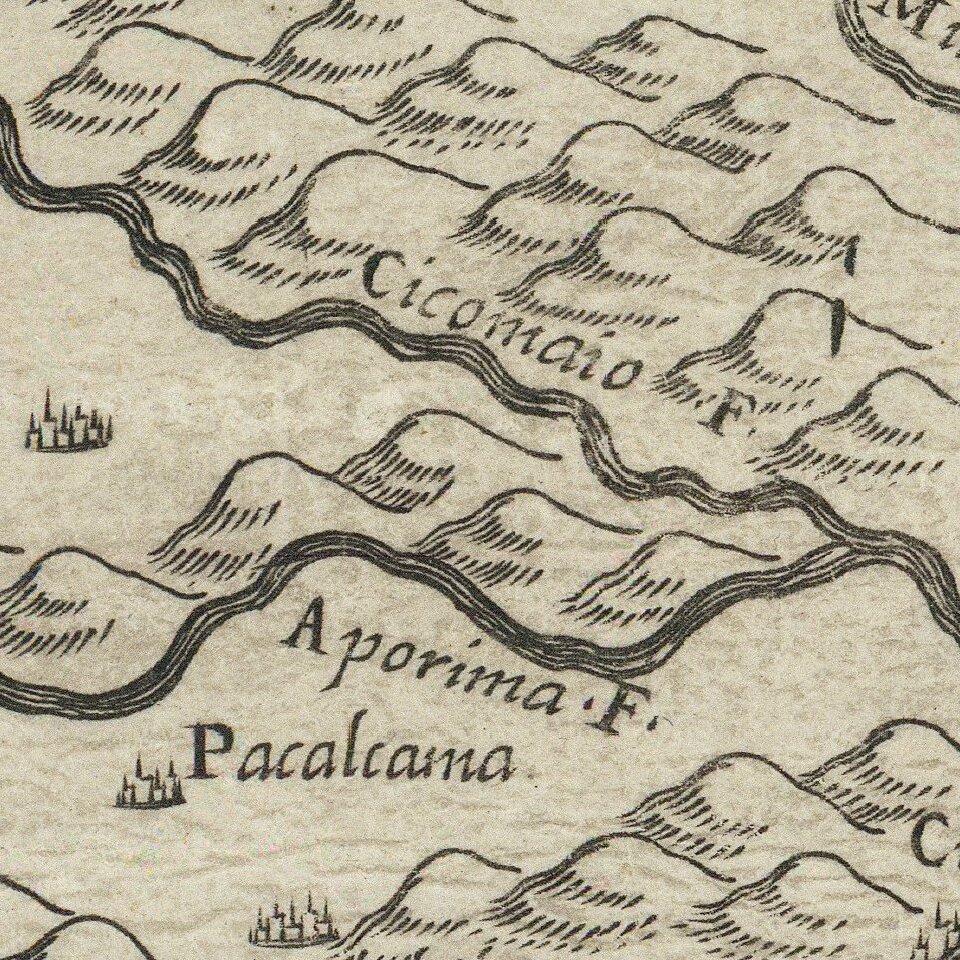 The map, one of the earliest continental maps of South America printed, features South America and much of the West Indies. Central America and a truncated Florida are included. The continent is shown in a stout, diamond form, with the Straits of Magellan separating the mainland from a large Tierra del Fuego. Tierra del Fuego continues into the map’s southern edge, a suggestive coast of a larger, unknown southern continent.

Unlike Forlani’s world maps—he released four in the 1560s—this map shows the Amazon with an east-west orientation, as opposed to north-south. The mighty river branches into several more in the interior, which is also filled with mountains. The Rio de la Plata delta is exaggeratedly wide and dotted with islands.

A glance over the toponyms offers many familiar names, although their placement reflects the still uncertain geographic knowledge about South America that was circulating in Europe in the mid-sixteenth century. Quito is in the center of the continent, with Cartagena far inland too. Lake Titicaca, here written as Titicacha, is also nestled deep into the central area of the landmass.

The continent itself is labeled Peru, rumored to be rich in rare metals and jewels. The Spanish invasion and conquest of the Inca Empire was ongoing while the map was made, fueling these rumors.

In the upper right corner is a fine strapwork cartouche with the title and a dedication. This dedication is to Giovanni Pietro Contarini, Forlani’s parton and a history writer. In the stippled waters of the South Seas is an embellished compass rose.

One source for this map was the work of Giacomo Gastaldi, who, like Forlani, worked in Venice. A near contemporary of this map is the 1562 wall map of the Americas by Diego Gutierrez. However, Forlani’s work sharply diverges from Gutierrez’s interpretation. Gutierrez’s continent is less stretched east-west and has very different river configurations, especially of the Amazon and Rio de la Plata.

The map is a fine example of the Lafreri School’s output and of Forlani’s distinctive style. It is a treasure of elite institutional collections and is rare on the market.

Forlani was a skilled and prolific engraver and mapmaker. His maps were frequently used in the famous Lafreri atlases, sets of maps—not necessarily uniform—selected and bound together on demand. The Lafreri School is a commonly used name for a group of mapmakers, engravers, and publishers who worked in Rome and Venice from ca. 1544 to 1585.

The makers, who were loosely connected via business partnerships and collaborations, created maps that were then bound into composite atlases; the maps would be chosen based on the buyer or compiler’s interests. As the maps were initially published as separate-sheets, the style and size of maps included under the umbrella of the “School” differed widely. These differences can also be seen in the surviving Lafreri atlases, which have maps bound in with varying formats including as folded maps, maps with wide, trimmed, or added margins, smaller maps, etc.

The most famous mapmakers of the School included Giacomo Gastaldi and Paolo Forlani, among others. The School’s namesake, Antonio Lafreri, was a map and printseller. His 1572 catalog of his stock, entitled Indice Delle Tavole Moderne Di Geografia Della Maggior Parte Del Mondo, has a similar title to many of the composite atlases and thus his name became associated with the entire output of the larger group.