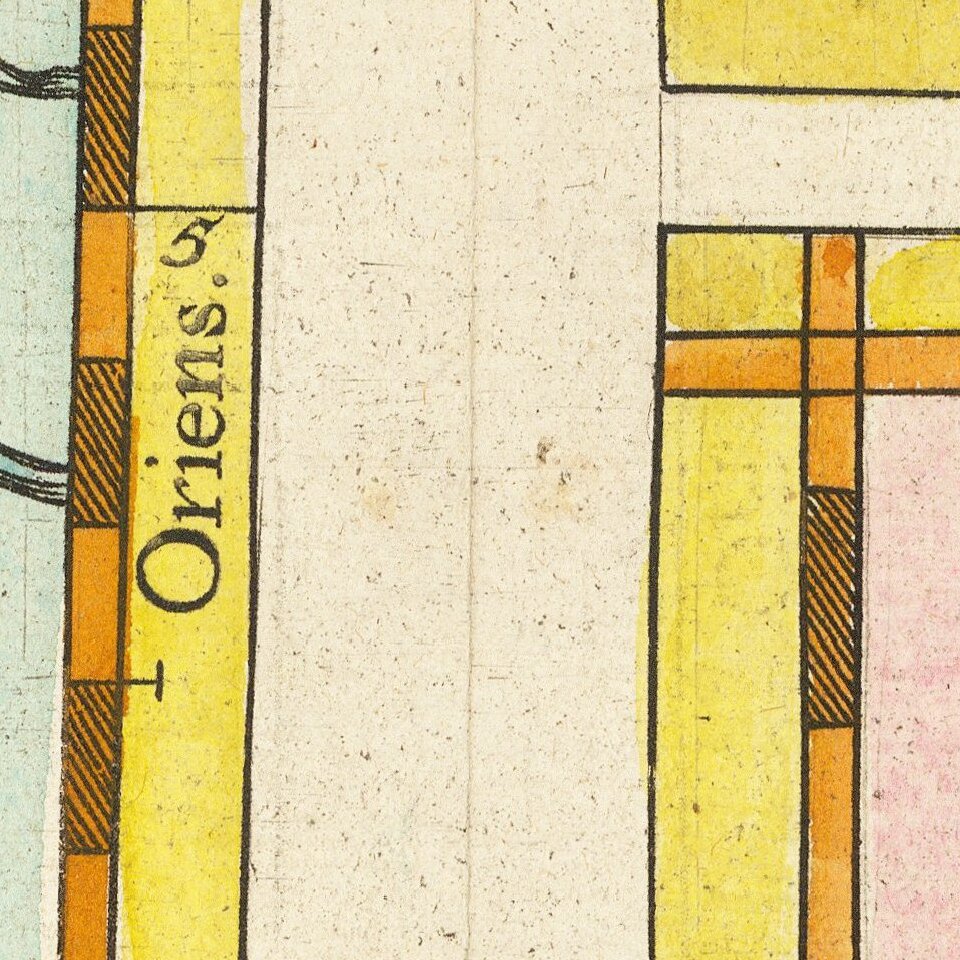 An excellent example of Abraham Ortelius’ seminal map of Florida and the North American South, shown within a trio arrangement of maps focused on Central and South America.

Ortelius’ groundbreaking map La Florida was the foundation for cartography of the region and remained the mapping standard for nearly a century. It is the first separately issued map of the feature. It featured in Ortelius’ Theatrum Orbis Terrarum, the first modern atlas, from its 1584 edition to the 1609 edition.

Along with the highly influential map of Florida, this plate contains a map of the Peruvian region of New Spain, extending from Central America to the Tropic of Capricorn, and a map of an area of central Mexico along the Gulf of Mexico called Guasteca (after the indigenous Huastec people).

Vessels sporting Spanish flags are shown off the western coast of the Americas, clearly delineating the region as Spanish territory. Each map contains fine scrollwork title cartouches; the Guasteca map in particular boasts a fine example topped with a bull and laurel wreath. The cartouche at top right of the Florida map asserts Ortelius’ publishing privilege.

Abraham Ortelius was known for finding map sources few others could access. It was exceptionally rare for popularly printed maps to be based on Spanish sources. However, this fascinating map trio references maps directly from Spanish authors: the map of Peru contains a cartouche citing “Didaco Mendezio”, Diego Mendez, the cartographer for the viceroy of Peru, and the map of Florida cites “Hieron. Chiaves”, Geronimo de Chaves, the Royal Cosmographer to Philip II of Spain and member of the Casa de la Contratación. The Casa de la Contratación was responsible for official Spanish mapmaking of New Spain, and Ortelius’ work is one of the earliest examples of the dissemination of Spanish cartographic information from the New World via the Casa.

These maps are some of the earliest to record internal detail for this region, based upon the findings of Hernando de Soto as recorded by Gonzalo de Oviedo and perhaps other Spanish sources from ca. 1570. Within these maps, cities are marked in bright red.The rivers depicted were particularly accurate for the time and influential for later maps of this region. Viewers will notice a nice example of the Mississippi, or Rio del Spírito Santo, emptying into a bay of the Gulf of Mexico.

As the earliest regional mapping of Florida and the South, Ortelius’ work wielded incredible influence in the history of cartography of the region. This groundbreaking work, accompanied by fine examples of Ortelius’ cartography of New Spain, is an attractive choice for collectors of Florida, the Southeast, Mexico, and the Spanish Empire.